It’s easy to imagine the earthy aroma of spruce and how tender new shoots may feel between your fingertips, but have you ever wondered how it tastes? How about kelp? It doesn’t look appealing laying in a slimy pile, but it’s edible, even good for us. Well, Tofino Brewing Co. has concocted some pretty amazing brews that tap into the riches of our west coast environment. I was intrigued and delighted to try them! 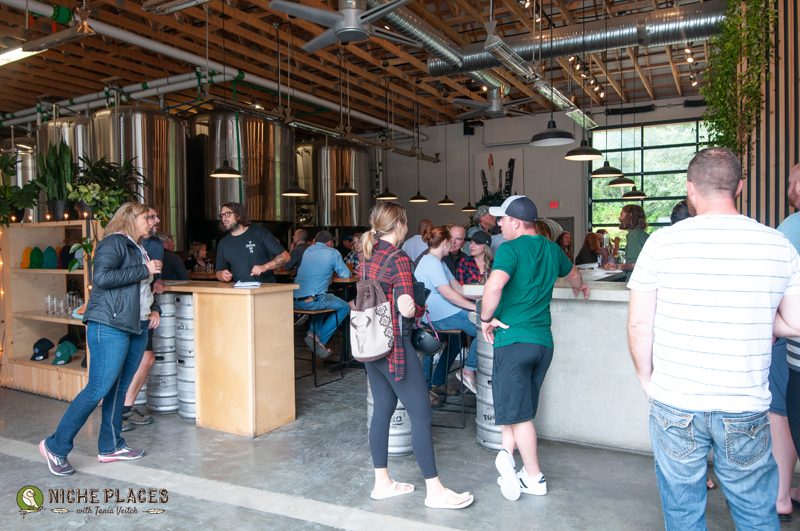 I sat down at the bar with Allan who is essentially the face of the business. He’s responsible for beer sales and shipments to government and privately owned liquor stores throughout BC, Alberta and Saskatchewan. He also ensures that local restaurants in Tofino and Ucluelet are stocked with their brews.

Allan gave me the rundown on five of the beers that I tasted. 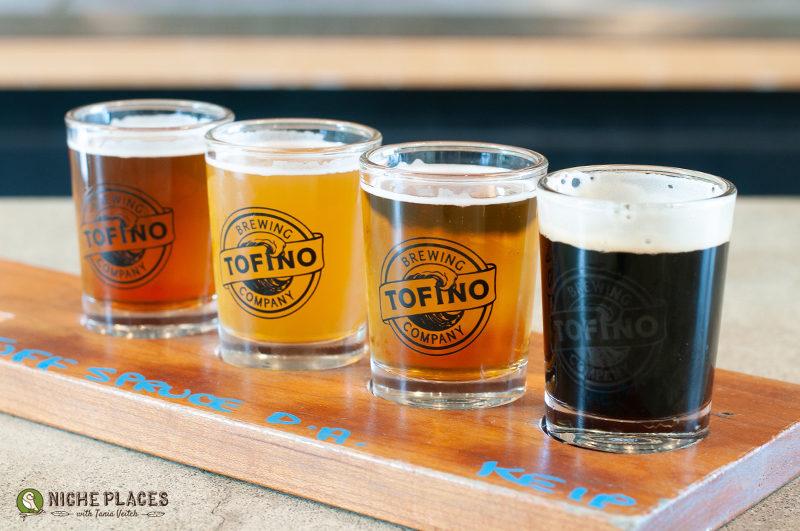 The owners of Tofino Brewing Co. were inspired to brew a beer that offered notes of the nearby ocean. Their first idea, an oyster brew, wasn’t going to work since one of the three owners, Dave McConnell, was deathly allergic to shellfish. Instead they focused on kelp.

The Kelp Stout beer is the colour of dark espresso. It has a rich silky texture and a salted dark-chocolate flavour given off by the dark heavy malts. Part of the salty flavour comes from the kelp. Each batch contains ten pounds of dried kelp straight from Bamfield. 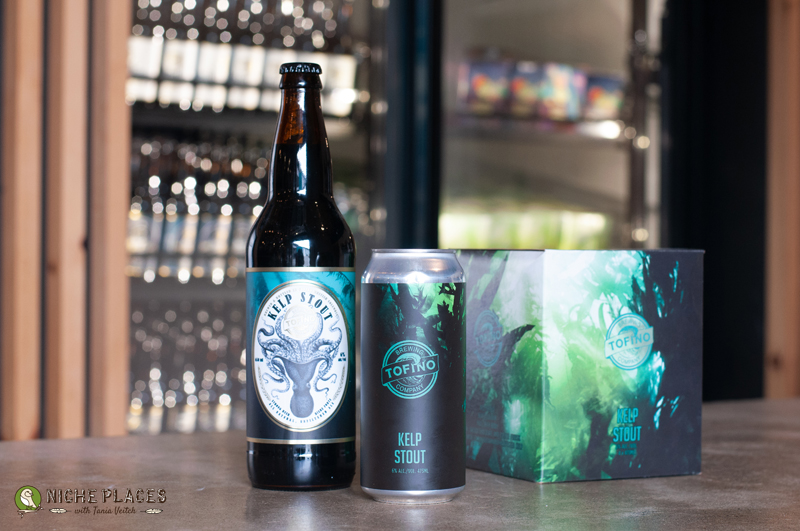 This is Tofino Brewing Co’s newest double dry-hopped pale ale. It is brewed with the “Idaho 7” variety of hops from Yakama, Washington. This golden beer has strong character and an intense high-hop aroma and flavour. I took a box of this home and enjoyed it immensely.

The new tall cans, which have been out for only a few weeks now, are adorned with some groovy artwork, something I’ve noticed about all of Tofino Brewing Co’s labeling. 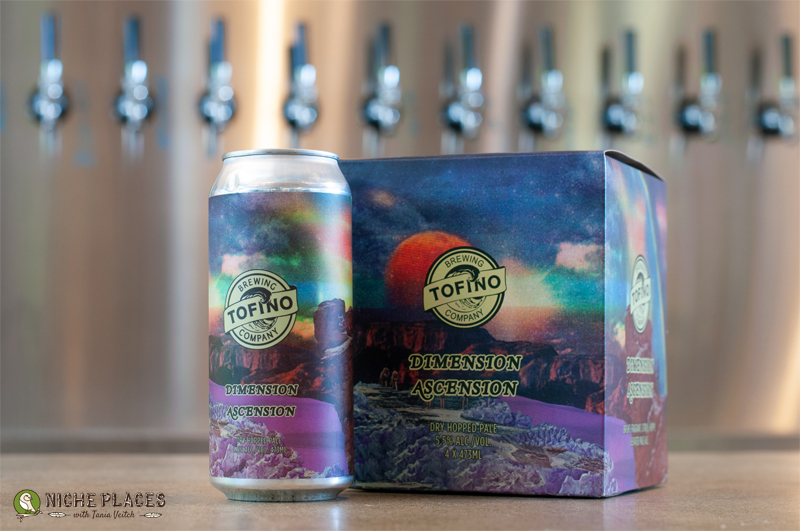 This deep golden beer is brewed with Sitka spruce tips. It certainly fits the vibe here on BC’s west coast. The beaches are lined with these hearty trees which can withstand harsh winter winds and sea spray.

Staff here forage for young spruce tips to make the first batch of the season. They also hire a forager to pick them on the eastern side of the Island. Both young and mature spruce tips are used in the brewing process. Young tender spruce tips are sweeter and contain more sugar than mature ones.

This beer has a fresh piney flavour that I was excited to pick out. It reminded me of our lush west coast rainforest. It also has a juicy dry finish. 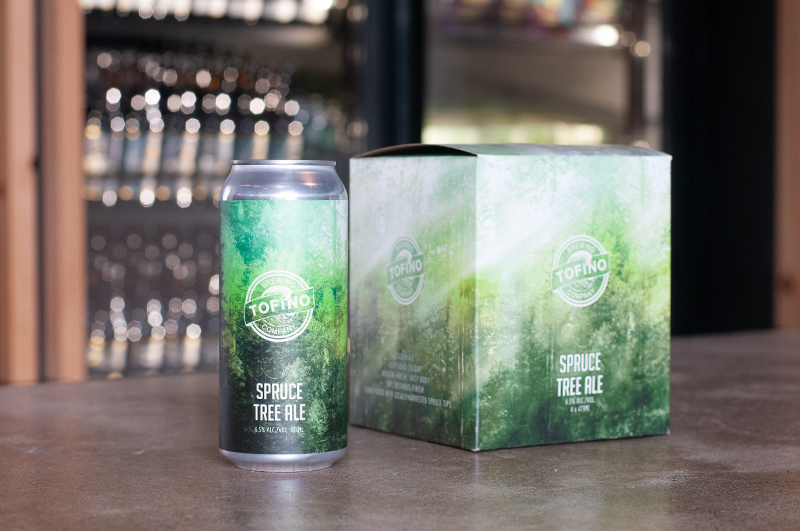 This copper-coloured beer is a classic English Pale Ale. It has a toasted malt base with mild west coast hops, medium body, and a clean, dry finish. It also gives off a caramel flavour. 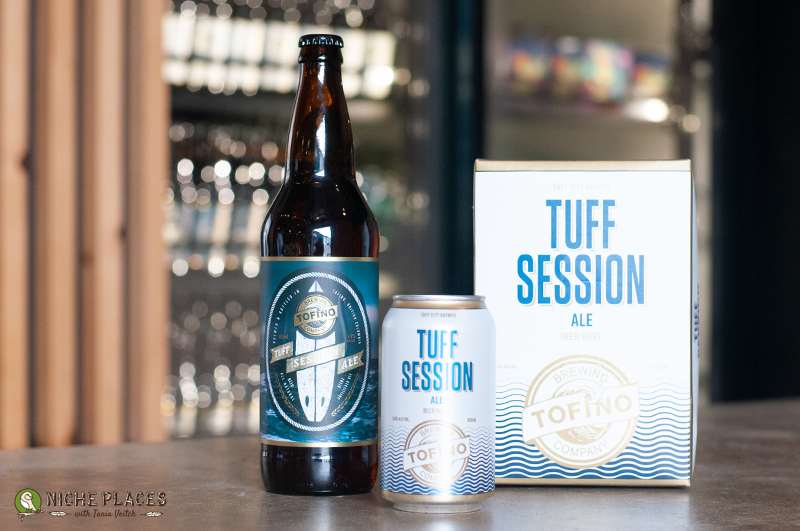 This is a deliciously sour beer. I’ve always been a fan of ‘sour’ whether that be sour candies or sour drinks like Kombucha. This beer is a bright and tart kettle sour. It’s a one-off beer made in a small tank. The sour taste, like kombucha, comes from a bacterial culture. No fruit is added to this beer. This beer is only around for a limited time so be sure to drop in and try it before it’s gone. It tends to sell out! 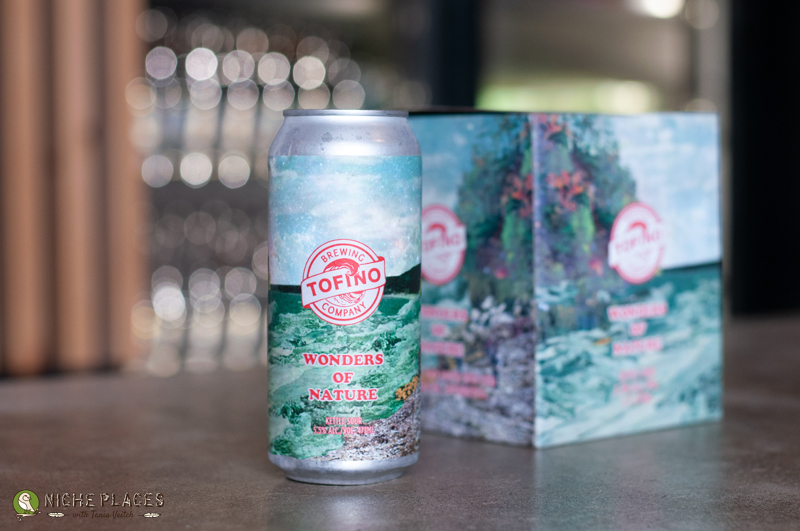 Tofino Brewing Co.’s refrigerator is always full. You can get 55 ml cans of the Blonde Ale, Tuff Session Ale, and Tofino Lager all year round. Tall cans include Dimension Ascension, Wonders of Nature, Spruce Tree Ale and Kelp Stout or you can purchase a 12-pack of the Tofino Lager.

You can also get a 4-pack of these very cool 650 ml bottles of the Kelp Stout, Hoppin’ Gretin IPA, Tuff Session, and Blonde Ale. 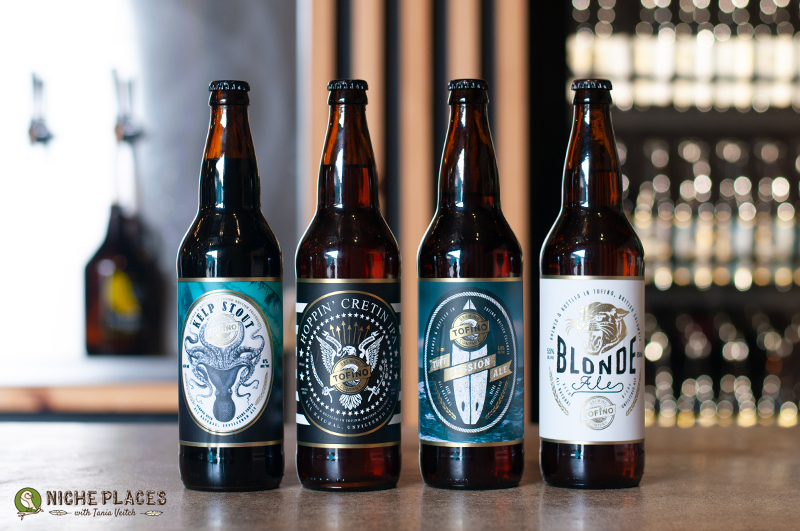 Get bombers or growlers and fill them with your favourite brew. Choose between Blonde Ale, Tuff Session Ale, Dimension Ascension, and Kelp Stout. 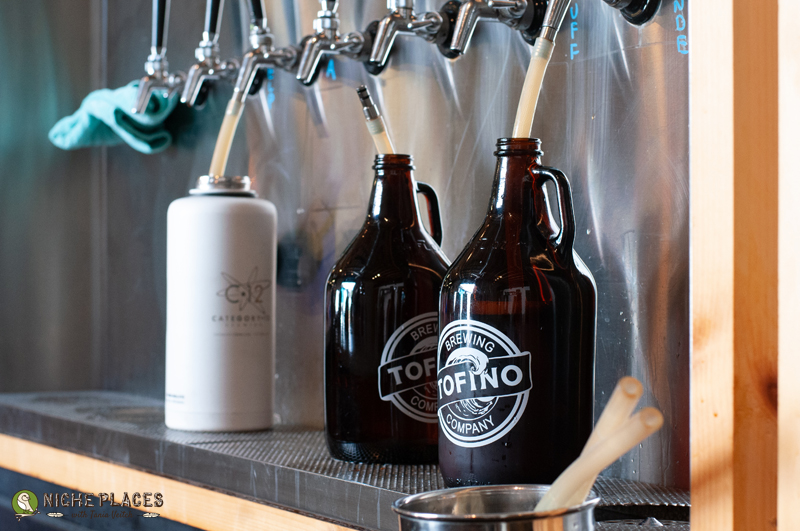 Depending on the time of the year you can also fill up with the beer of the season. Currently it’s Spruce Tree Ale. Other seasonal beers include Double IPA Cosmic Wave (October and November), Dawn Patrol Porter (Christmas), and Winter Dark Lager. 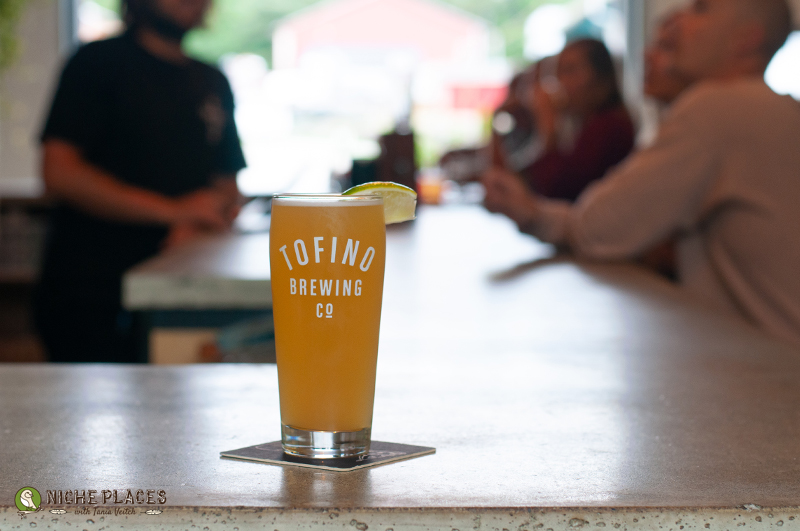 You may also want to try some of their other beer creations, or if you’re looking for something different you can also order cider or kombucha. 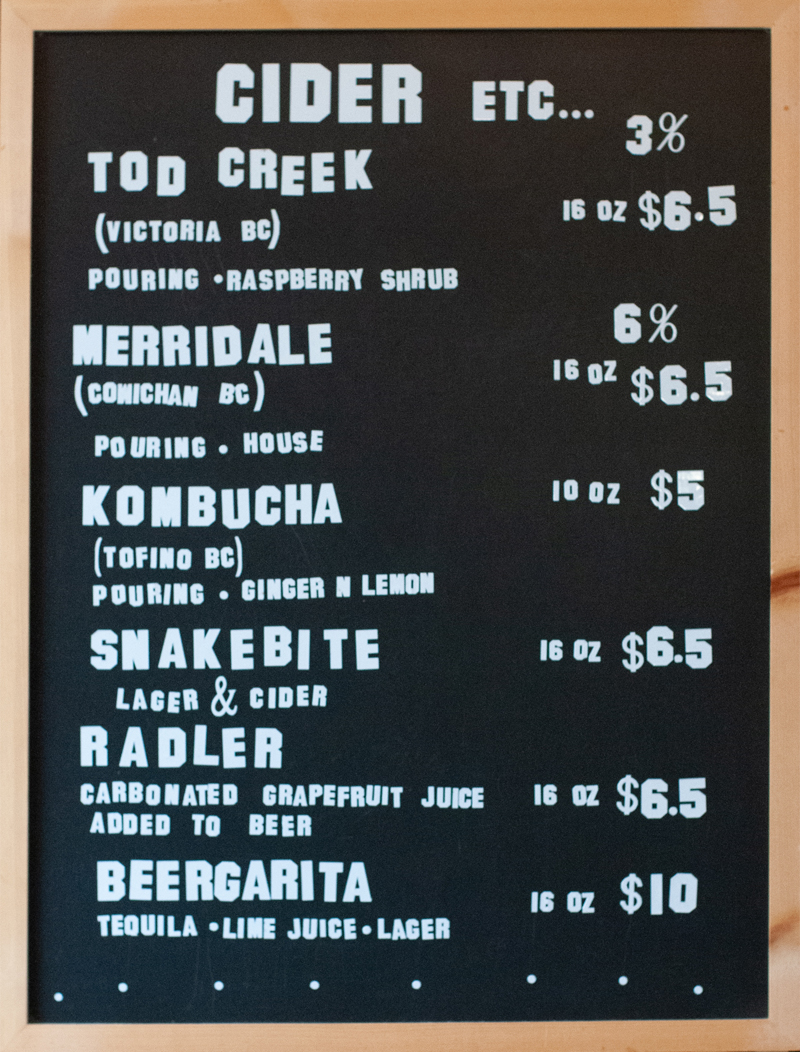 If you feel like munching on something while you sip some beer, here are few tasty options. It’s nice to see that Tofino Brewing Co. supports local businesses like Summit Bread Company (Pretzel), RedCan Gourmet (Chips with Salsa), and West Pacific Seafoods (Smoked Salmon). 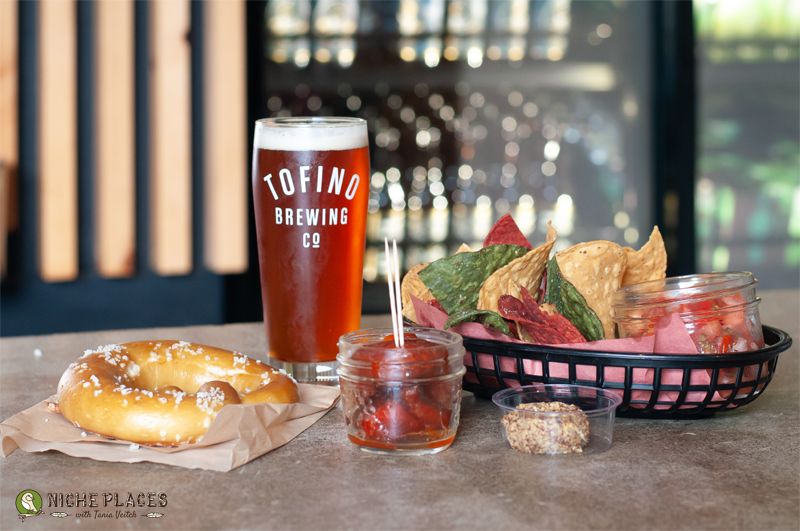 How it all started

The vision began in 2010 with three friends, Dave McConnell, Bryan O’Malley and Chris Neufeld. They decided to visit Storm Brewing in Vancouver. At the time, micro breweries were in their infancy. The three friends thought it was a cool idea and, since Tofino didn’t yet have a brewery, they saw an opportunity to be a positive addition to the town and went for it!

Bryan and Chris both went to business school and then secured some local investors. In 2011, Tofino Brewing Co. opened in a small garage beside Summit Bread Company and then in January 2018 moved to the current location. 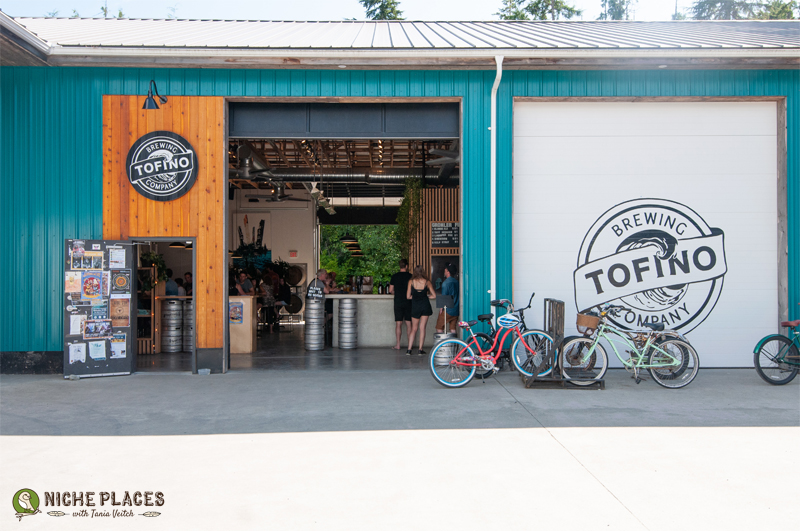 Stop In Year Round!

If you’re curious like me, stop in and sip the spirit of Tofino while enjoying some scrumptious local snacks along with a cool West Coast vibe and an eclectic Spotify playlist. I’m certain you’ll be impressed!