On the Canada Day long weekend a friend and I happened upon Tofino Bike Co. along the Pacific Rim Highway. We were excited to pick up two beach bikes and managed to cover quite a bit of territory between Cox Bay and Tofino.

Our wheels meandered in and out of the surf as it rushed up the fine wet sand. It splashed my pant legs as I peddled along. Kelp deposits clutched little treasures like abandoned seashells and a few tiny crab exoskeletons. Kelp bulbs popped under the weight of my tires like words released from my thoughts. 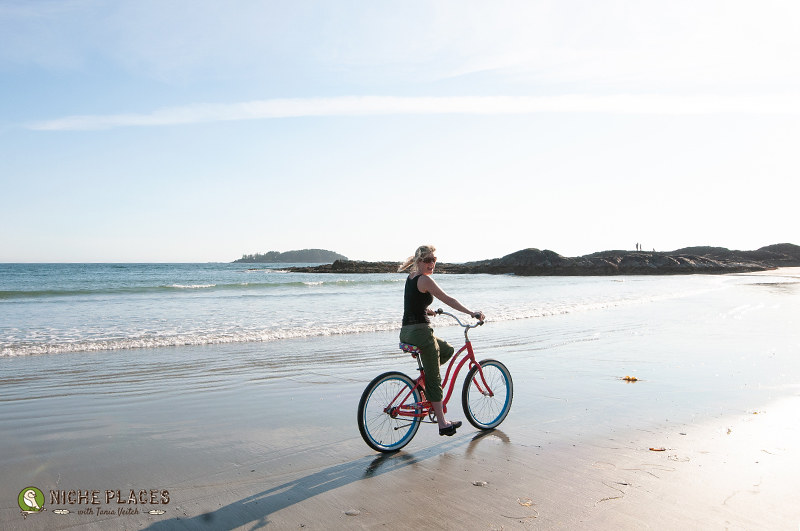 The fresh sea air tousled my hair and brushed my bare arms as I peddled along exploring the expansive Chesterman Beach. There is so much to take in here along the Pacific Rim and so many ways to explore each bit of it. Riding a beach bike is one way to cover a lot of territory in an afternoon. I highly recommend giving one a try! 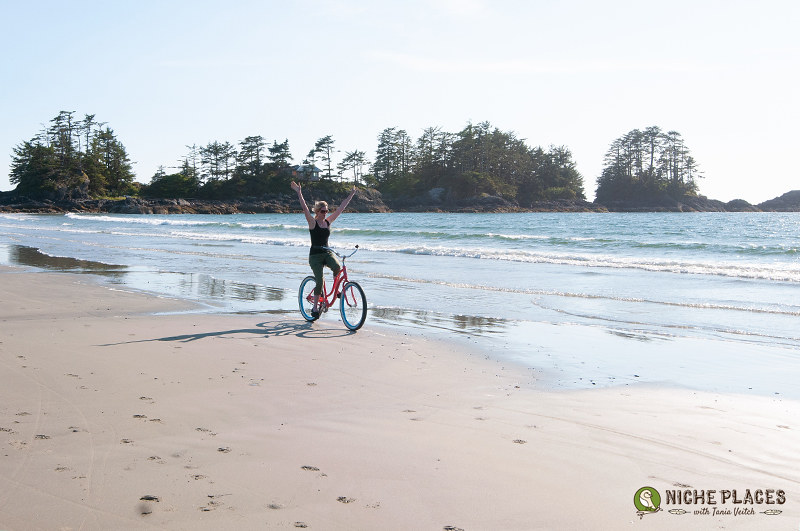 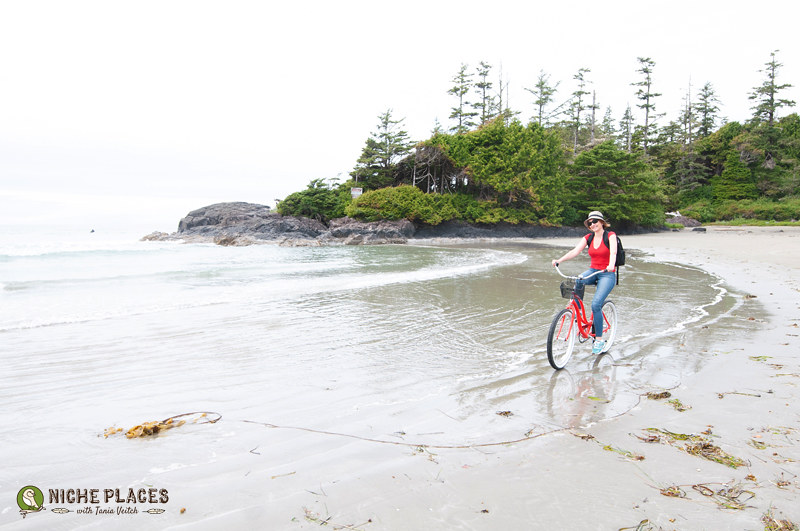 These bikes remind me of the one I had before my first 5-speed except it had a purple banana seat and funky U-shaped handlebars. You had to make a half-peddle backward in order to stop. These beach bikes break in the same way except they’re, thankfully, much trendier. Riding them definitely brought back freedom feelings of my childhood! 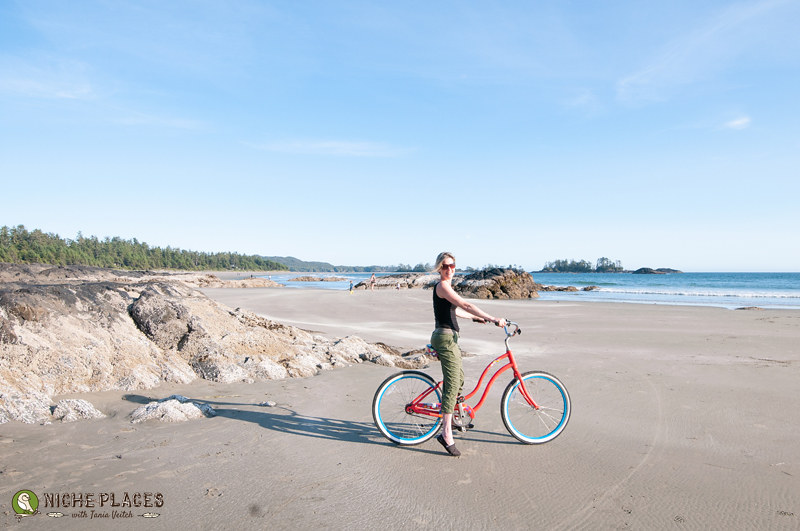 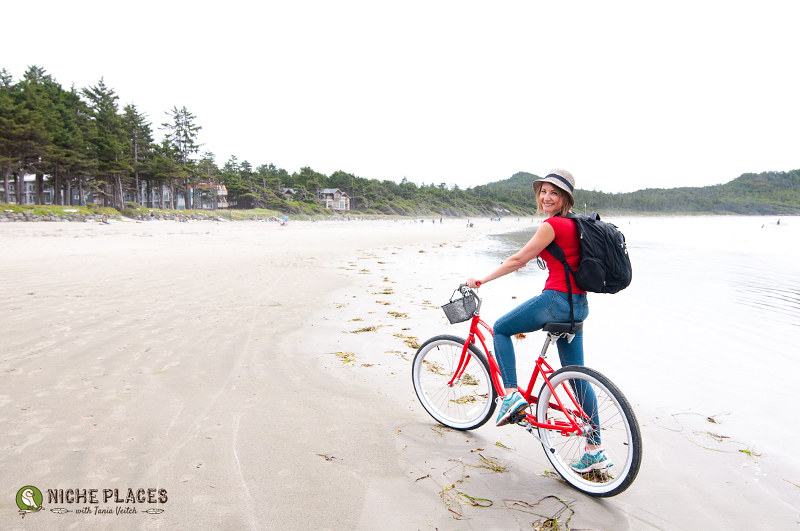 The hard-packed sand was naturally easy to peddle on although it didn’t stop us from trying the bikes out in the softer sand. We had to stand and push hard on our peddles so as not to fall over. It was challenging! 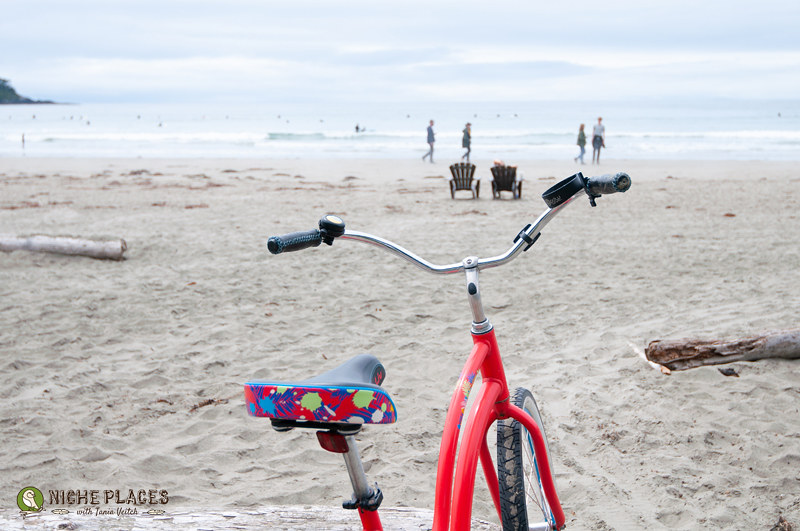 A great place to explore is Chesterman Spit and Frank Island (below mid-left) located between north and south Chesterman Beach. It’s only accessible during low tide though so you’ll want to check out the Tide Forecast before venturing out there.

On Frank Island, you can sit, picnic and watch the surf break on the rocks. You can see the lighthouse in the distance from there too. 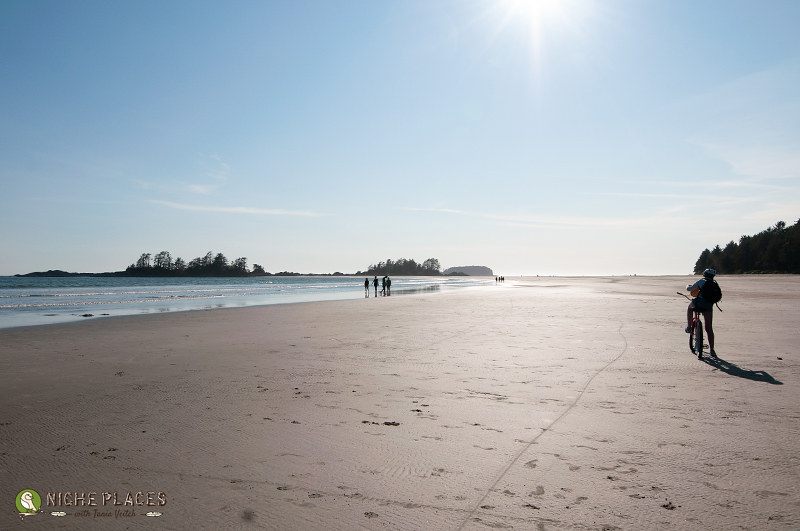 Or perhaps you may want to take a break and play in the waves.

Check out some of the beautiful resorts in the area too! The Wickanninish Inn at the north end of Chesterman Beach has the Driftwood Café if you feel like a latte or an ice coffee. 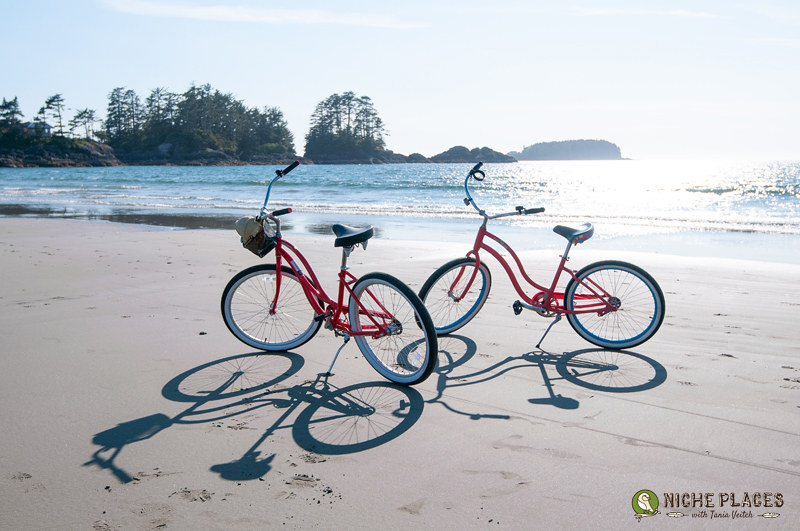 Ride on the beach and road

The beach bikes we rode are multipurpose. Not only can you whip in and out of the surf, but you can also ride them along the Pacific Rim Highway right into Tofino which is set up wonderfully with bike lanes. 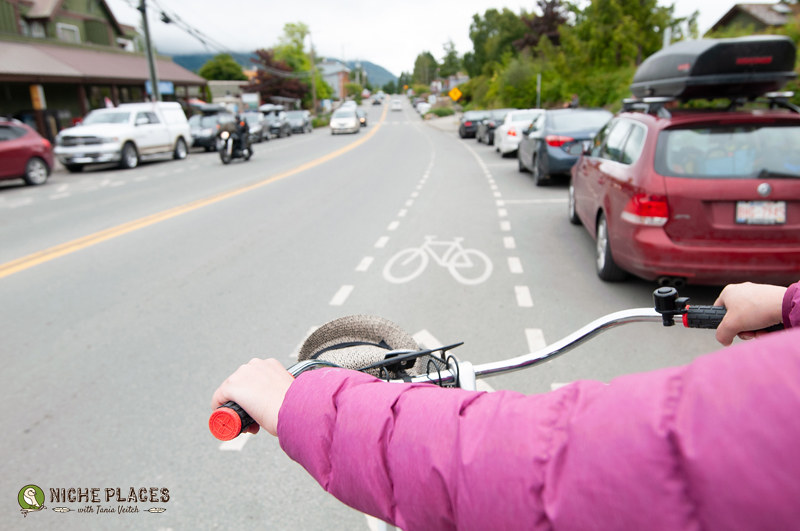 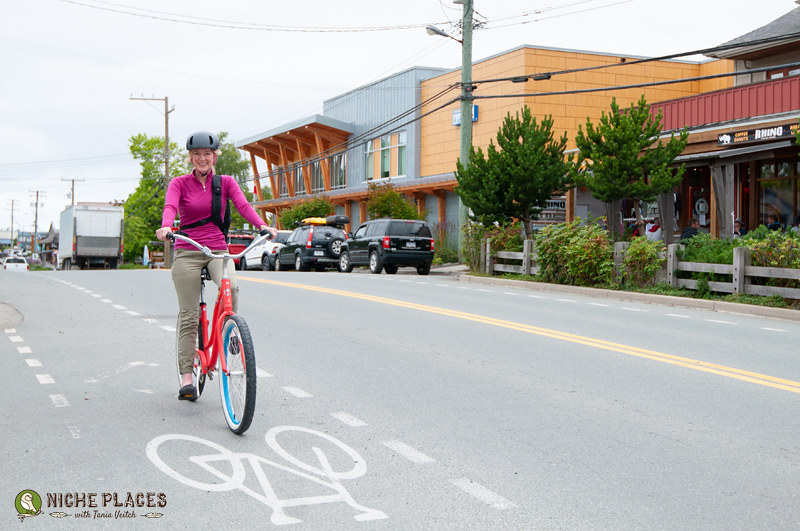 And, as the chalk art kindly reminded us, “Don’t forget your helmet!” Apparently, the bike police are quite ticket-happy here! Helmets come with your rental. We used ours on the roadways but shed them at the beach and for photos. 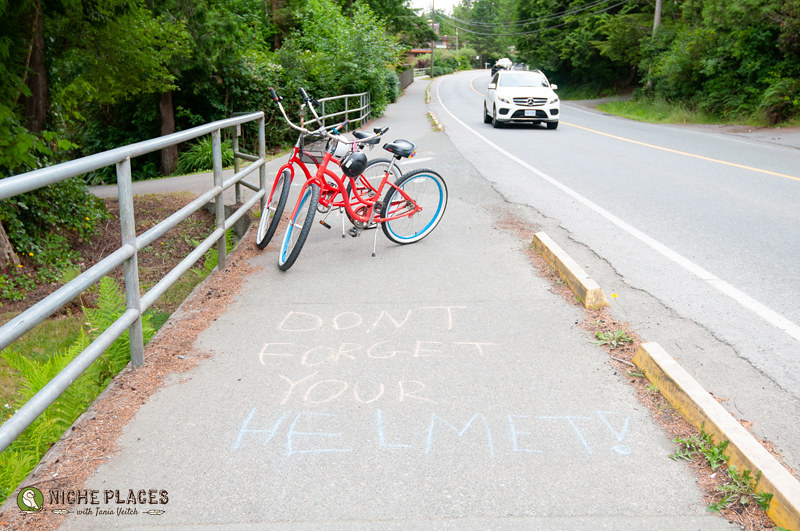 In Tofino, there are many unique places to explore from shops and restaurants to docks and trails. You get a bike lock with your rental so you don’t need to be tied to your bike at all times. 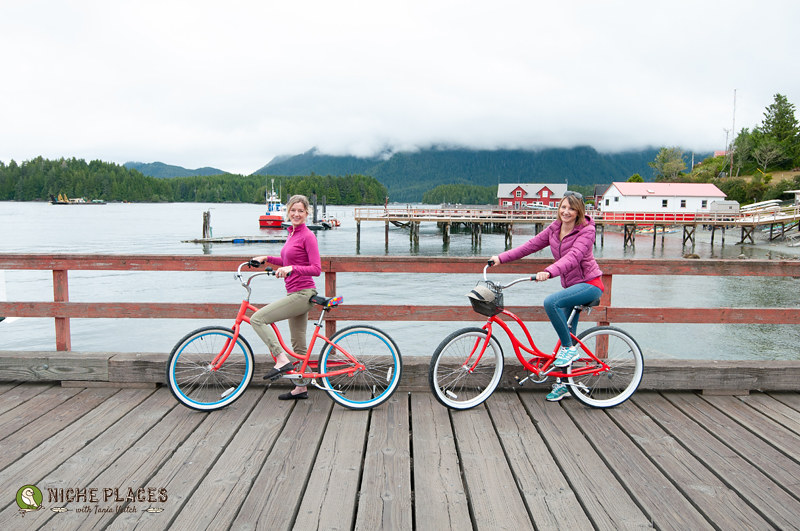 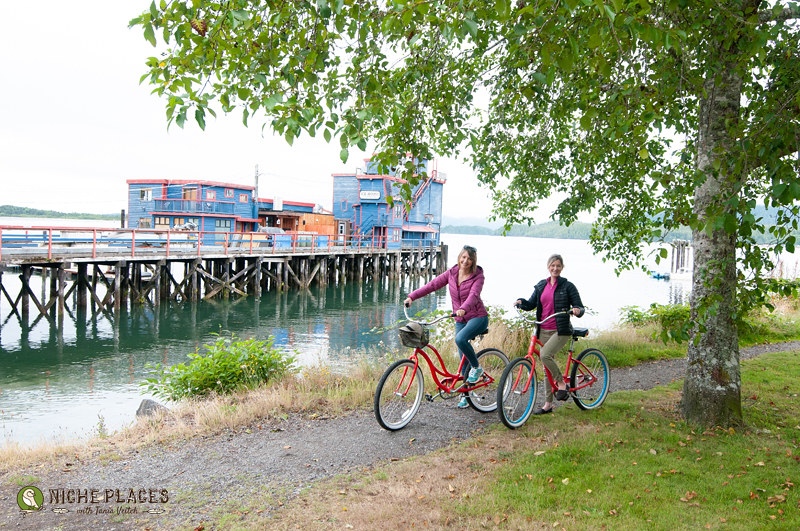 This was my first time riding a beach bike through the surf. Well, no. I had ridden a regular bike along the beach here nearly three decades ago, but I didn’t realize the harsh effect that the salt water would have on my wheel rims and spokes until a few days later. The bike was basically trash after that. Rust ate away at anything that used to shine. 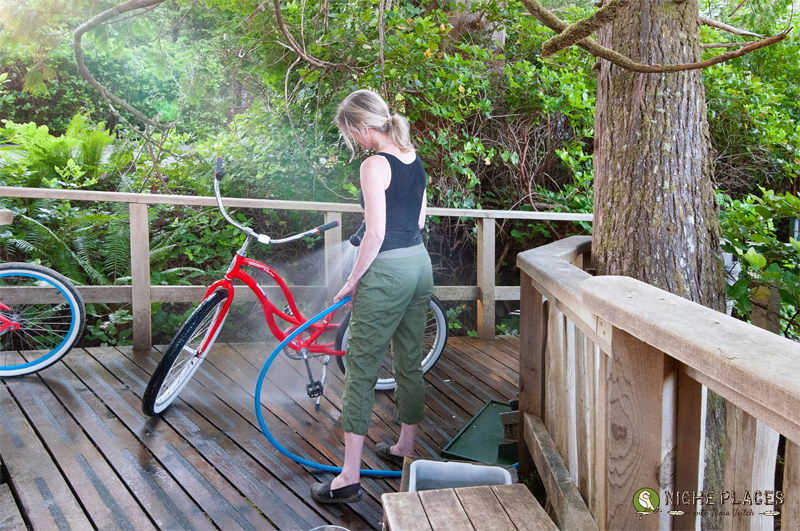 There’s a hose at the Wickinninish Inn to wash off

These beach bikes are not immune to the ravages of the west coast ocean climate either, but Tofino Bike Co. rinses and hand-cleans the bikes thoroughly when they come back. The chain is also cleaned and lubed after each use.

Furthermore, the bikes are regularly maintained so you’re guaranteed a good ride. Alyne, the owner/operator of Tofino Bike Co., says, “The beach bikes regularly get ‘hub services’, which is when the whole coaster brake hub is taken apart, new grease is added, and bearings or other parts are replaced as needed.”

“We are lucky to have a really awesome head mechanic,” Alyne said of Eliot, who for three years has taken great care of their bikes. The bikes are also replaced on a yearly basis so new ones are ready to go each summer season.

Bikes of all styles & for all ages

Tofino Bike Co. has loads of different types of rentals so whether you are into navigating rough steep terrain, cruising down the easy-going Pacific Rim Highway bike lane, or rushing through the surf and exploring miles of beach, you’ll find something suitable for your unique adventurous spirit.

You can rent child seats, chariots, kids bikes of all sizes, mountain bikes, 7-speed city bikes and beach bikes. I wish I could have seen this in action, but Alyne says they also have surfboard racks for their bikes. So cool! And if you want to team up with your best bud or partner, they’ve even got two tandem bikes available! 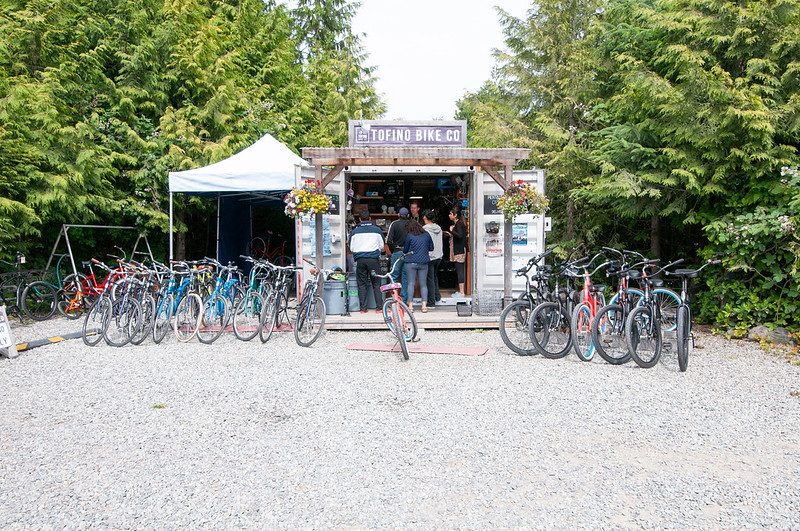 I was inspired by Alyne’s story, much because I too have taken a leap of faith from the high board of a comfy career into unfamiliar waters. Trying to find your own floatation device among a sea of people striving to do the same thing can be tricky. You’re competing with bigger fish that make bigger splashes in the world. But, I like to think of us smaller fish as maybe a little more colourful!

This is Alyne’s third career. She achieved a Science degree and worked in Environmental Assessment for many years until she gave it all up for travel. Oh, how I can relate! She got the surf bug while in Nicaragua and then moved to Tofino approximately ten years ago.

For a time, being a surf bum was great, but she became tired of it. She then decided to obtain an education in Web Development. Yep, me too!! She liked the idea of working and travelling, but even that gets old when much of your day is spent in front of a computer. I totally get this. Meee too!

Two years ago, a perfectly-timed conversation with a good friend (the previous owner of Tofino Bike Co.) led Alyne to her third career, taking over the business. Being a problem-solver who loves to learn and work with her hands, Alyne decided, “Okay, I am going to learn to be a bike mechanic now!” Hats off to you Alyne! I’m a fan!

Find Tofino Bike Co. in the Live To Surf Shopping Complex located at at 1180 Pacific Rim Hwy, Tofino next to Tacofino, Wildside Grill, Chocolate Tofino and a few other great shops!