A crackling fire burns in the sand under a sparkling diamond sky. The crashing surf ebbs and flows and lulls you into a parasympathetic state while the hypnotizing embers warm your cheeks. Stories, laughter, and a strumming acoustic guitar uplift your soul as you roast a s’more or a baked apple pie with one of those long-handled sandwich makers. That’s dessert after the satisfying roast and russet potatoes that were baking under a simmering beach fire all afternoon. 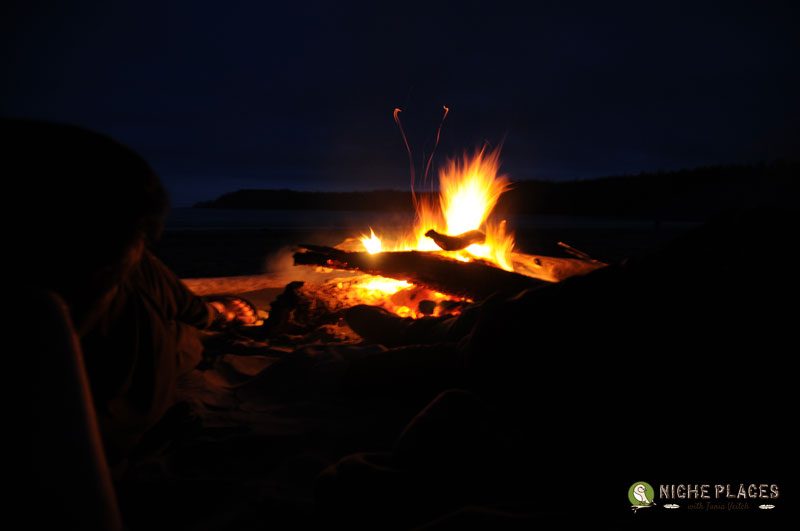 You have to admit that camping on an ocean beach creates good lasting memories if done right. Luckily Vancouver Island has many options, some beaches with easier access than others.

One great beach for camping on is Sombrio located near Port Renfrew along the well-known Juan de Fuca Trail. Although Sombrio Beach has easy access off the main road, it’s not well signed. You could easily miss the gravel turn-off just past the Loss Creek bridge.

The access road is a little rough, but a car like Silver, my Honda Civic, can still get in. It doesn’t take long. The parking lot is well kept, after all it’s a provincial park.

The path to the beach is well groomed and only a 15 minute walk. Even still you may want to skip hauling all the heavy stuff in if you’re planning to seek out a quieter camp spot. 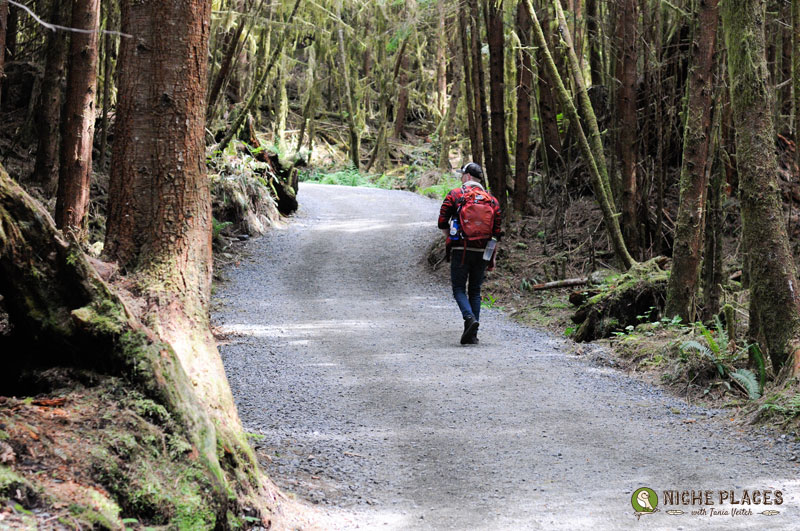 The beach is quite long, much of it an assortment of oval stones worn smooth by the surf. Some are speckled with gold and wrapped with belts of sun-bleached colour. 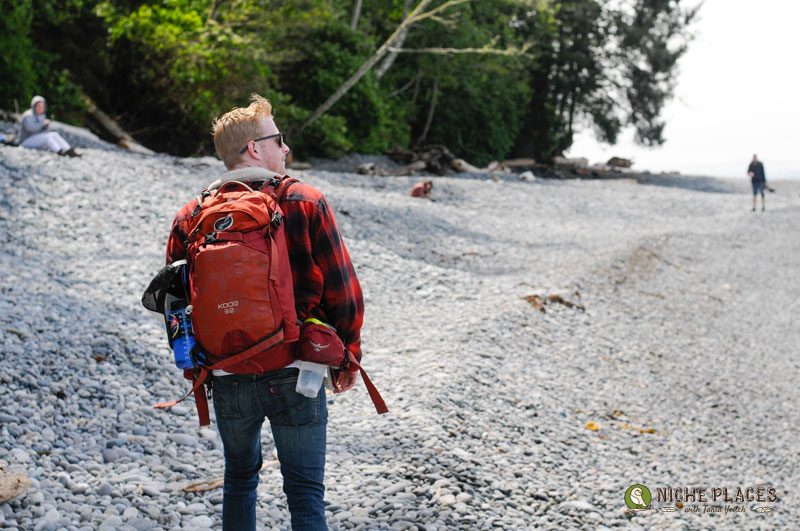 My son (above) is from Vancouver and had never been to Sombrio Beach before. Beaches like this are quite a novelty to those who don’t have easy access to the west coast open ocean. He will definitely be back with friends for some beach camping this summer!

I first experienced Sombrio Beach a couple of years ago when I hiked the Juan de Fuca trail with three friends. Sombrio was my favourite beach along the way.

We hiked directly to the east end. Martin said it would be quieter (as in people) being the farthest away from the parking lot. He was right, at least on this day. 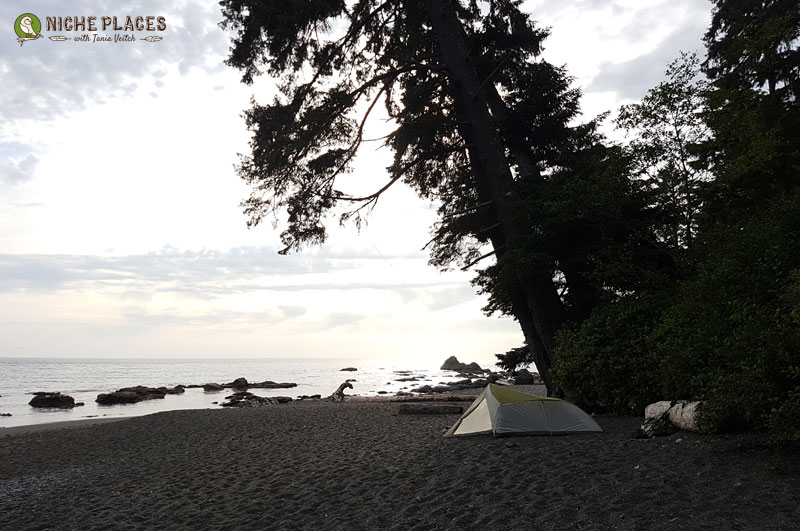 I pitched my tent at the back of the beach. The surf roared so loud in the night that I feared it would sweep me and my tent away and send us en route to Japan! I unzipped and poked my head out. The moon cast a silvery glimmer on the tumultuous surf, which was much closer and wilder than it was earlier. I was safe but thoughts of rogue waves did cross my mind. Yikes! 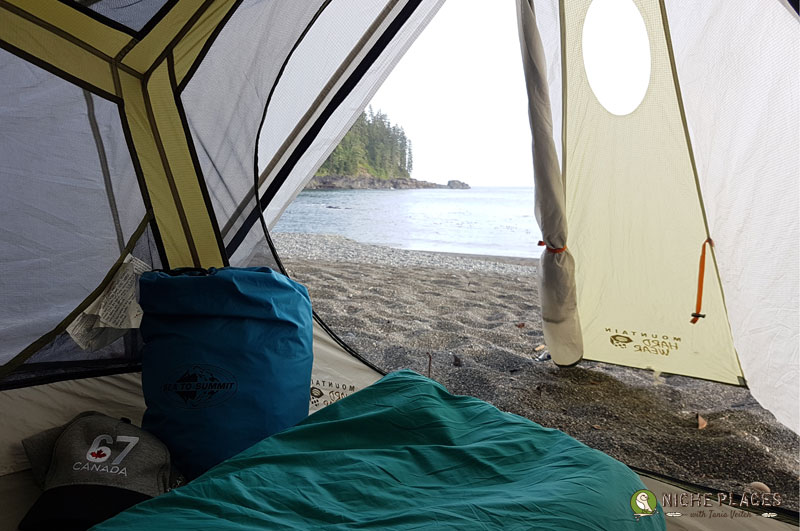 The tide wasn’t too close yet, but it sure got closer in the night!

There is an even better reason to camp at the east end of Sombrio Beach besides it being less busy. You’ve also got closer access to Sombrio’s hidden gem, a very cold and beautiful natural shower!

To find it, look for a stream that trickles down the beach from the trees towards the ocean. You can see where it has carved out a route before it disappears into the sand. 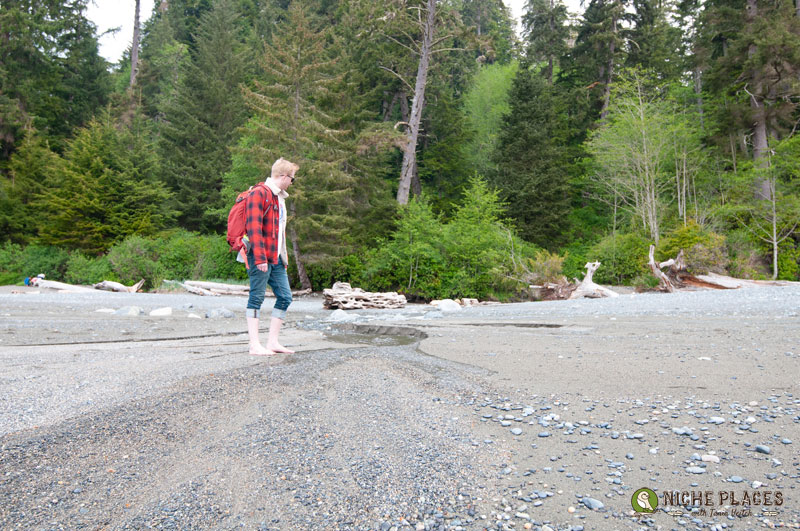 Follow the stream up through the trees and you’ll find a narrow trail which leads to a cave adorned with emerald shades of moss and small hanging ferns. 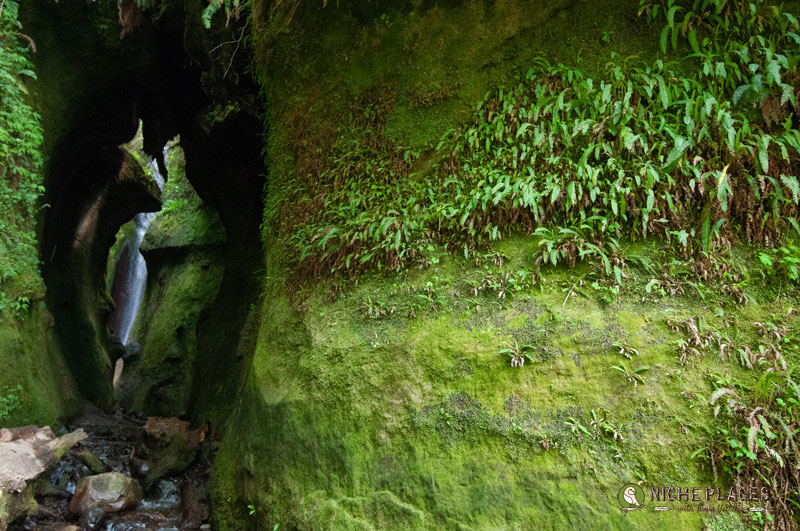 You may need to take your shoes off and leave them near the entrance in order to keep them dry. 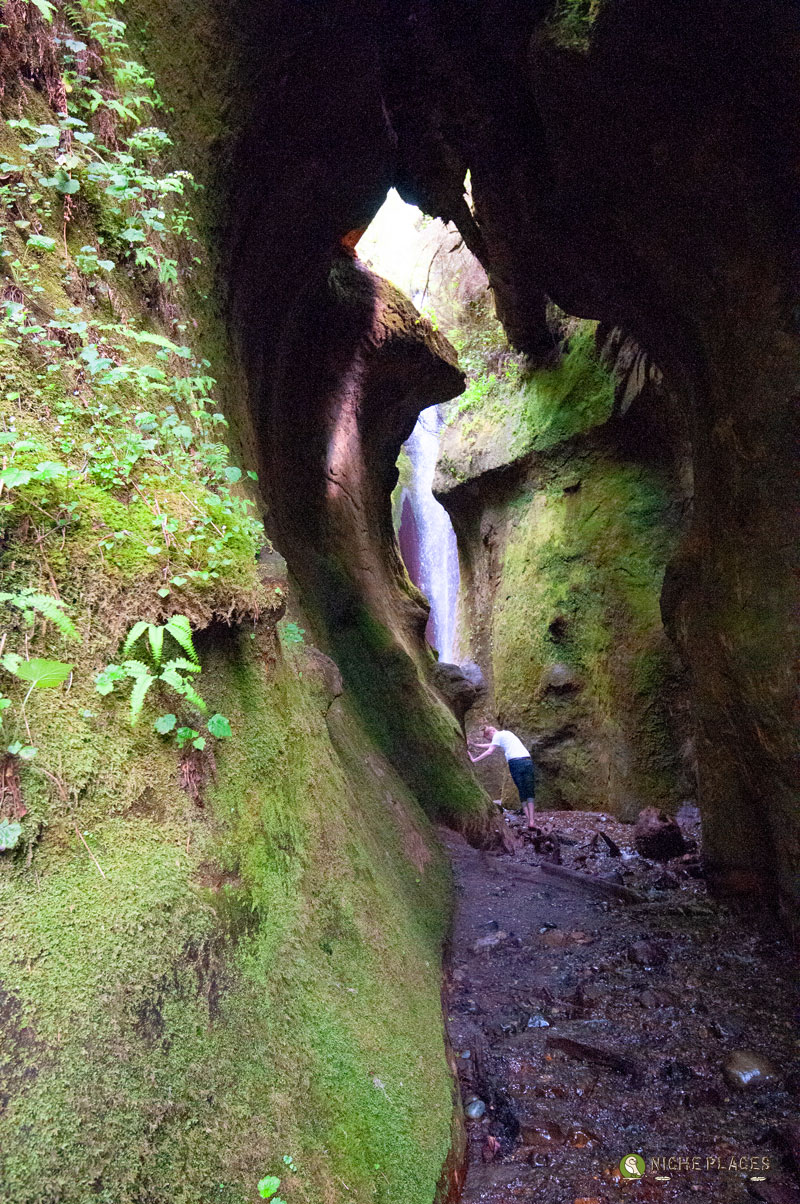 It’s a delightful find right from the moment you enter the cave. On a hot summer day, this would be a great place to freshen up. You may want to bring a bar of soap especially if you’ve been hiking for a couple of days. Just be prepared that you may have company at some point. 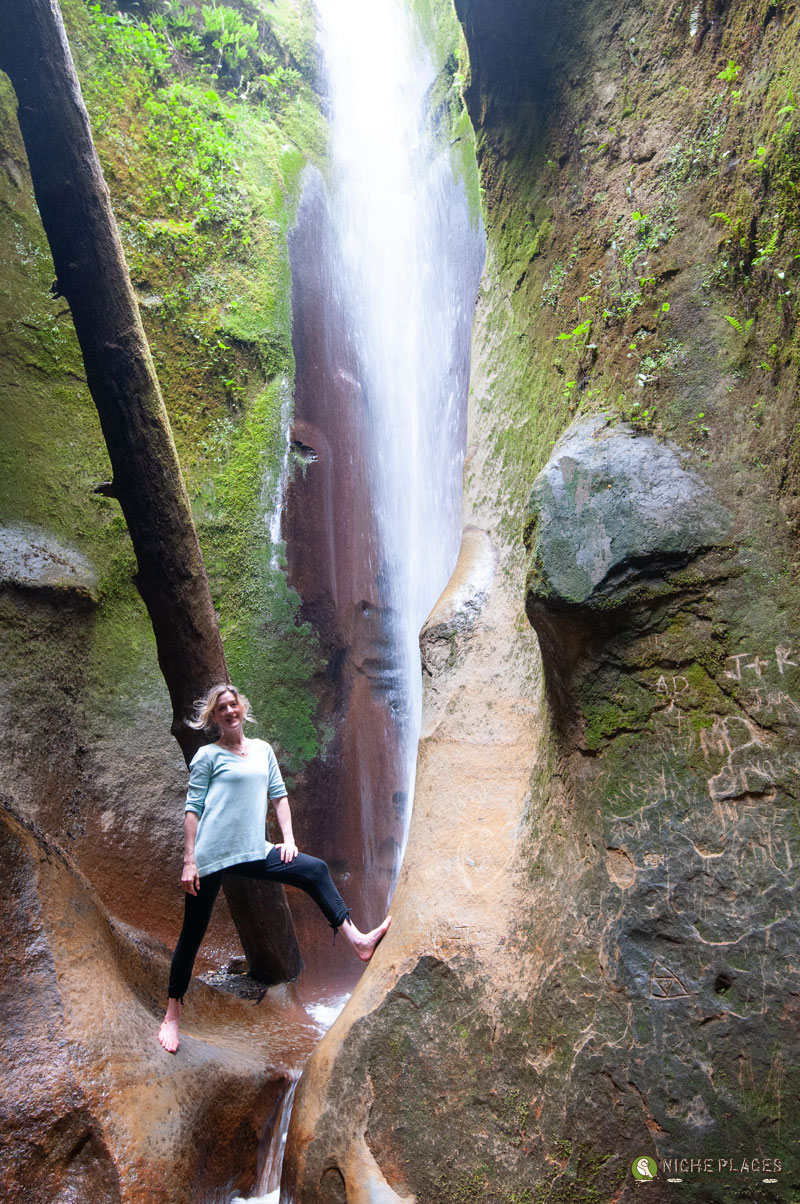 A Hidden Gem for Surfers

Although I did not witness surfers during my two visits, Sombrio Beach is a known hot spot for riding our west coast waves. This day would not have been ideal for surfers so if you’re going for that reason first check the surf forecast! 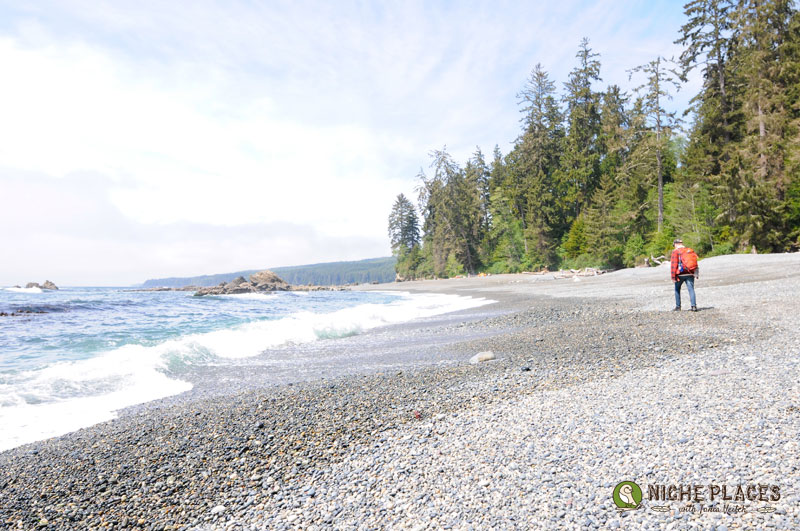 It’s good to remember that the west coast rain forest is home to large furry critters. For their own good and ours, it’s important not to tempt them with any food, garbage or other smelly things like toothpaste and deodorant. Keep it out of reach when you’re out exploring or sleeping. Another note, if you’re camping and cooking…don’t sleep in your cooking clothes! It would be like basting yourself and laying down on a thinly covered silver platter. Bears really do have sensitive noses.

Thankfully, though, Sombrio Beach has bear caches. Be sure to bring a garbage bag with you and haul out what you bring in. It’s wonderful to be able to camp in this pristine environment. Keeping it wild and clean is important for our wildlife and, of course, it’s the main reason we love it here in the first place! 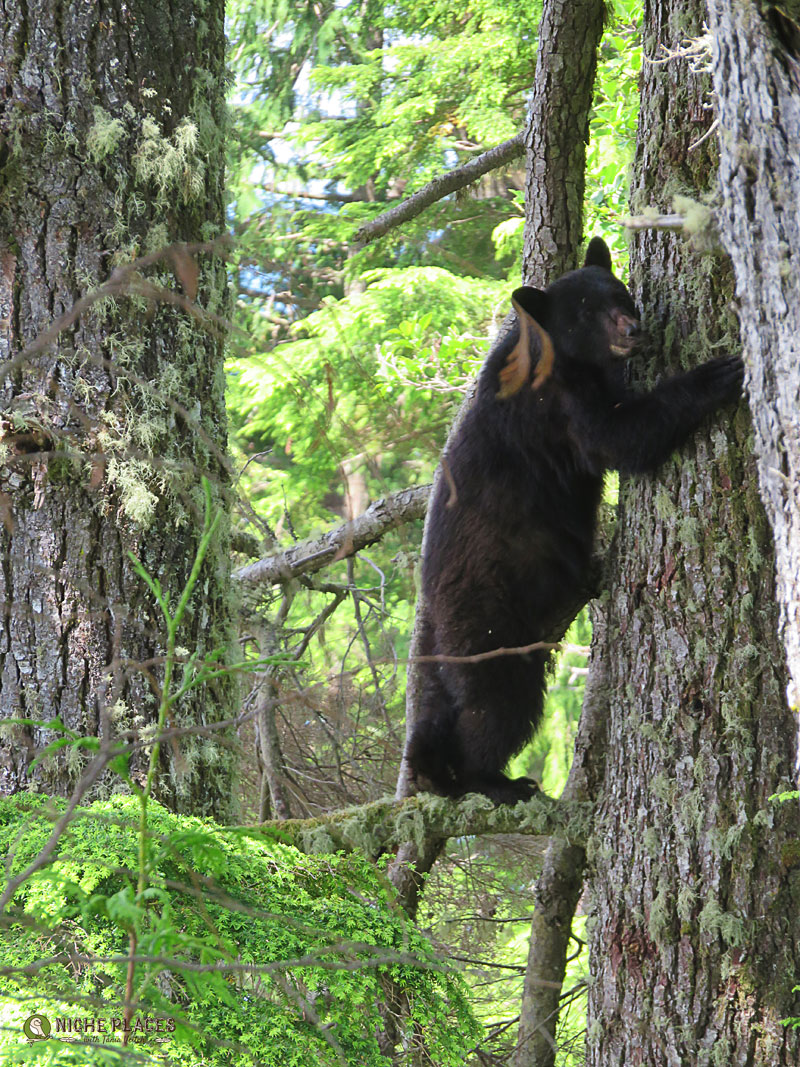 We passed this young bear in 2017 while hiking the Juan de Fuca Trail between Sombrio Beach and Chin Beach.

Best Beaches To Eat A Sandwich in Tofino