Little Red Corvette blared from my stereo speakers as I sang along slapping the steering wheel of Silver, my Honda Civic and partner in crime when I go off on these exploration adventures. It was Jack FM’s 80’s long weekend and it as my long weekend to take a step away from my desk and enjoy a little R & R.

We wove along tree-lined roads passing farm stands, lakes and spring pastures full of those little daisies my mom used to string into necklaces for me. 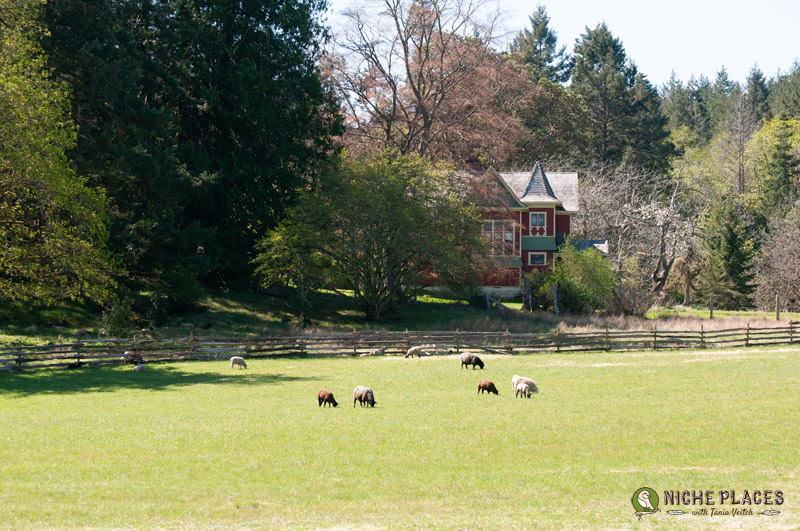 Sheep, lambs, turkeys, deer, and a few long-horned cows grazed on succulent emerald grass shoots. The warmish April sunshine draped the land in a golden hue. Sheep called out to each other in varying tones from mezzo-soprano to deep bass. 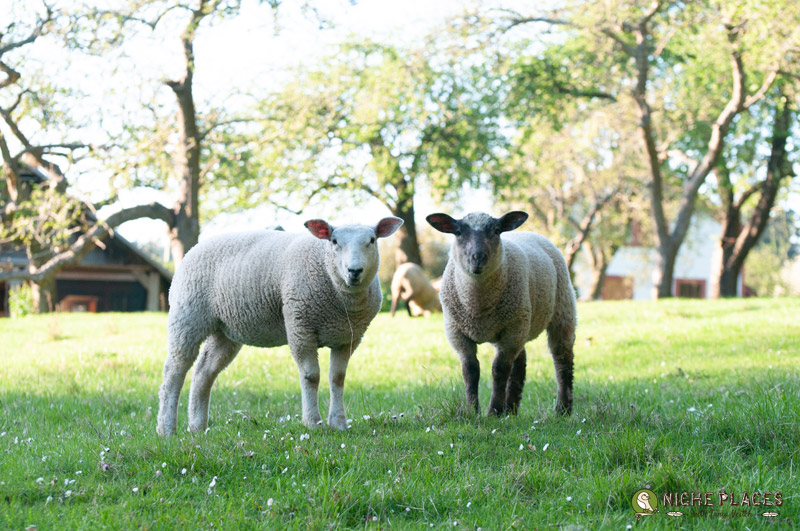 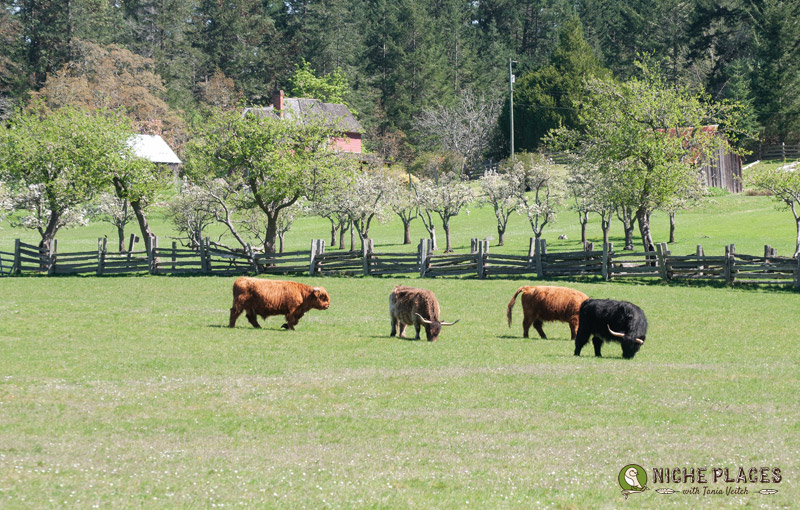 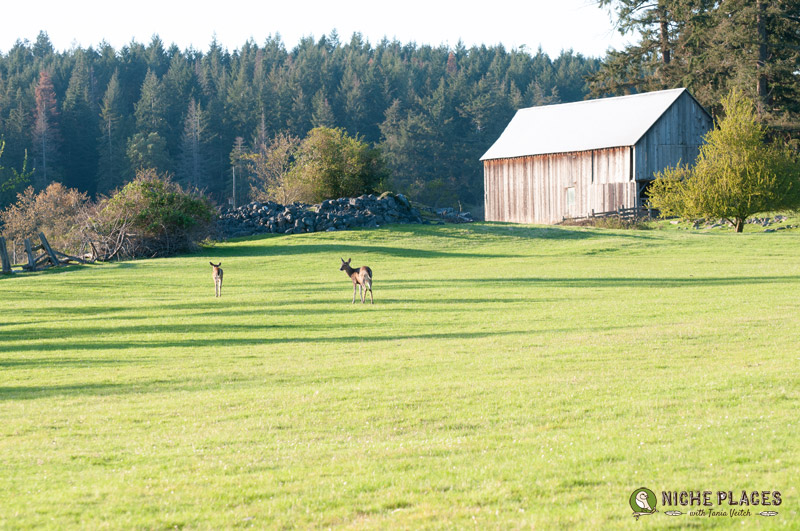 Turkeys fanned and shook their feathers and roamed freely along the road and forest trails. They were not shy! 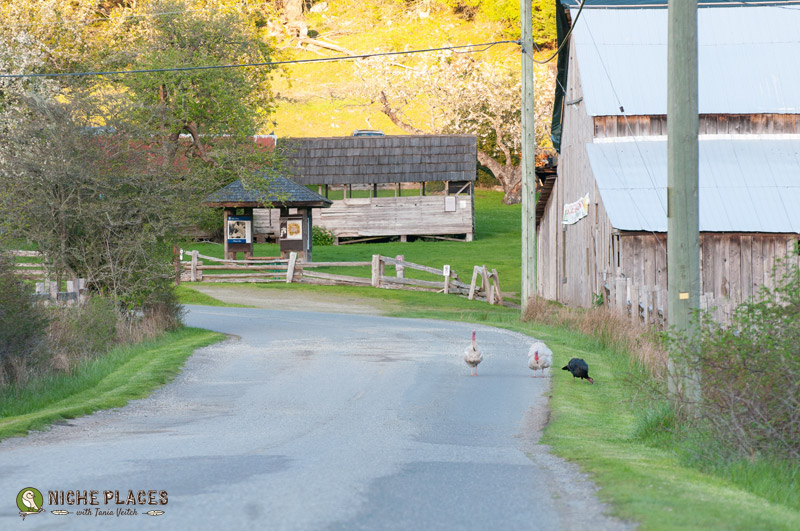 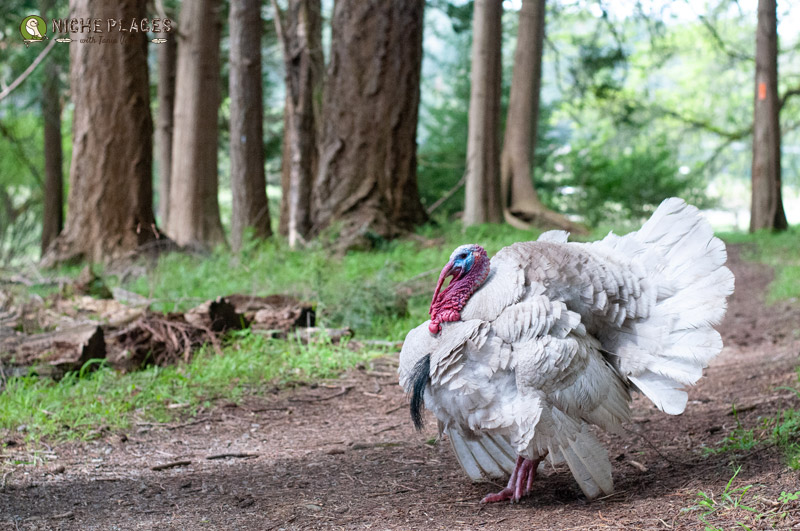 This was my first time visiting Salt Spring Island. I was excited when a group of friends, nicknamed the Dirty Pants Gang (that’s another story), decided to camp near Ganges on the Easter weekend.

Salt Spring Island has a relaxed vibe mixed with an eclectic air. Some of the locals seem easy to spot wearing hippy garb or felt hats. My friend, Murray, joked that this island seems to be populated with wizards and archers. Not quite, but there were a few uniquely dressed people.

The shops reflect the earth-conscious, healthy and artsy way of life here however nothing is cheap for obvious reasons like transporting goods, but also because there is money here and lots of it! 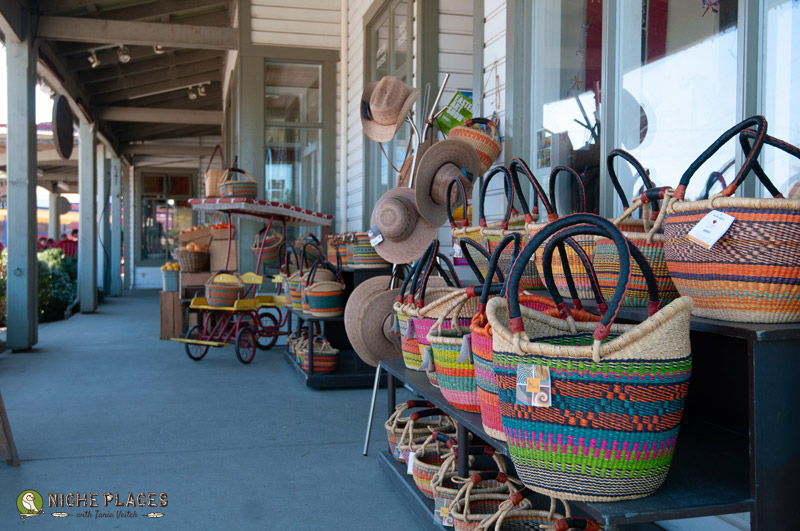 This island, although some may think to the contrary with its population of farmers, artisans and hippies, is very wealthy. My friend’s father who has lived on Salt Spring Island since 1994, says it has three banks. Impressive for a little island. To give you a comparison, Oak Bay, a rich neighbourhood in Victoria, has seven.

Salt Spring Island even has its own currency that trades on par with the Canadian dollar. It is issued by the Salt Spring Island Monetary Foundation for the purpose of promoting local history, art and goodwill. It’s marked with a $$ to differentiate it from a regular dollar and is adorned with important Salt Spring Island historical figures. You can get Salt Spring Dollars in denominations of $$1, $$5, $$10, $$20, $$50 and $$100 and it is accepted at most businesses on the island (Wikipedia, n.d.).

Famous people such as artist, Robert Bateman, musician and songwriter Steve Bachmann (The Guess Who), and a slew of other rich people including authors, CEO’s, and even a mathematician and a physicist, call Salt Spring Island home.

Unfortunately, for regular folks, the cost of living is right up there with Vancouver and Victoria and maybe even worse. Food is 10% higher than in Victoria plus you’ve got ferry costs in order to get to Vancouver Island and the Mainland (Salt Spring Island Foundation, 2018). 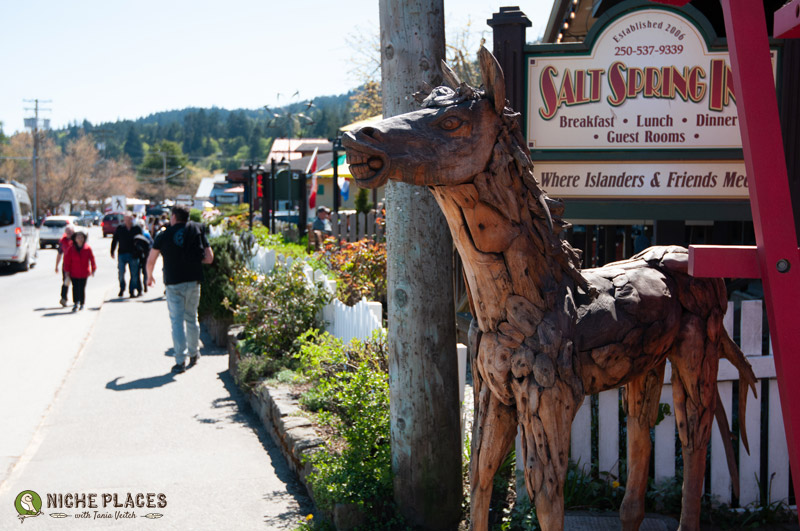 A Laid Back Place

I get why people come here though. Instinctively, I take a deeper breath. Salt Spring Island is even more relaxed than Vancouver Island which to Vancouverites is vacationland. However, Salt Spring takes ‘laid back’ to even another level.

A young woman skipped onto the lake dock exclaiming in a melodic voice to her quiet boyfriend who was sitting cross-legged in a colourful blanket-nest, “I’m surprised you’re not naked right now!”

That’s when her clothes whipped off and she plunked herself down beside him to sunbathe. She didn’t seem to care that I was standing there with my camera in hand. And no, I did not snap a shot. I was kind of stunned actually and didn’t know how to react besides just pretend that I hadn’t noticed while taking a panorama shot of the lake.

Apparently, this is a Salt Springish thing to do and likely to happen a lot in summer months.

The people I experienced here were extremely helpful. Mikala stopped to help Murray and I find a hardware store. Not only did she point the way, but she even walked us there to make sure we found it.

Additionally, Salt Springarians are big on the honour system. Roadside stands selling baked goods and flowers are everywhere and I imagine in the summertime they are also full of fresh berries, fruit and veggies. Nobody mans these booths. You just take what you want and leave the correct amount of change. 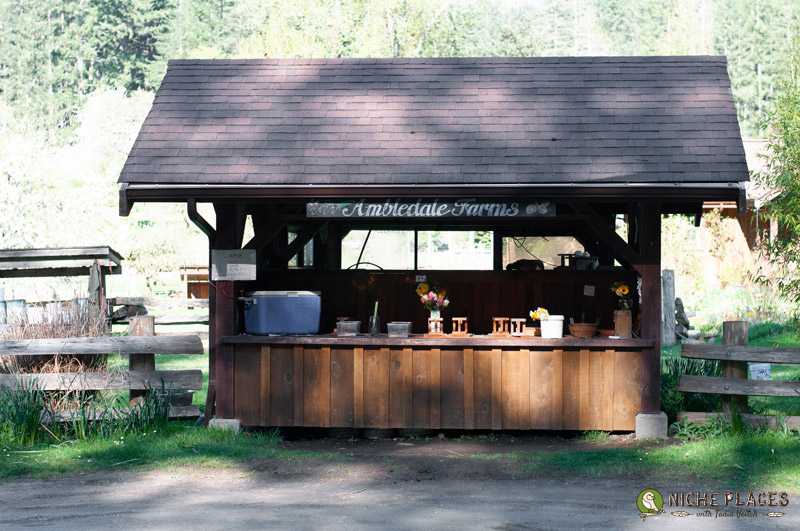 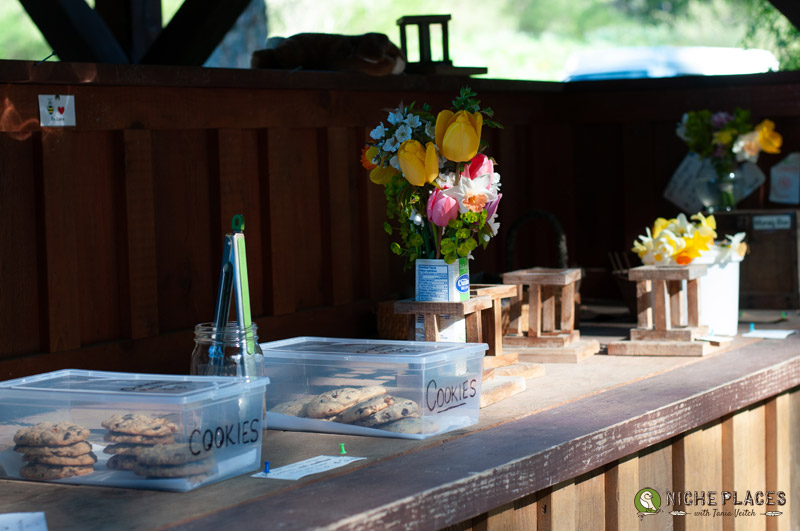 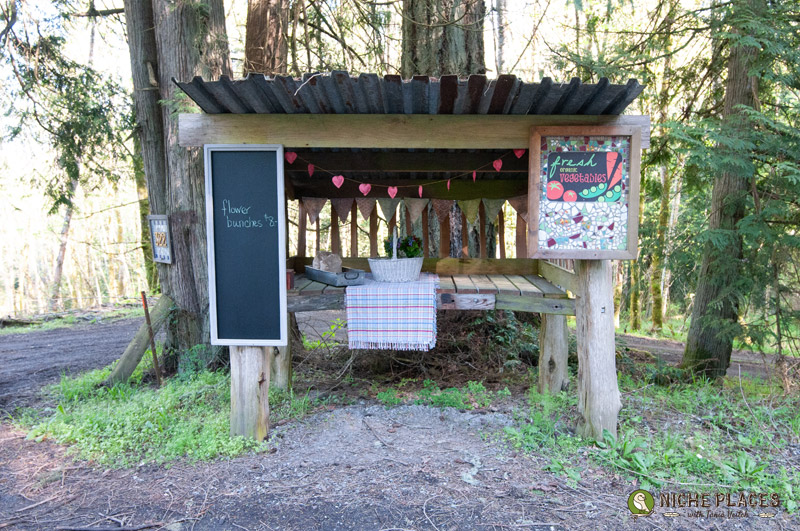 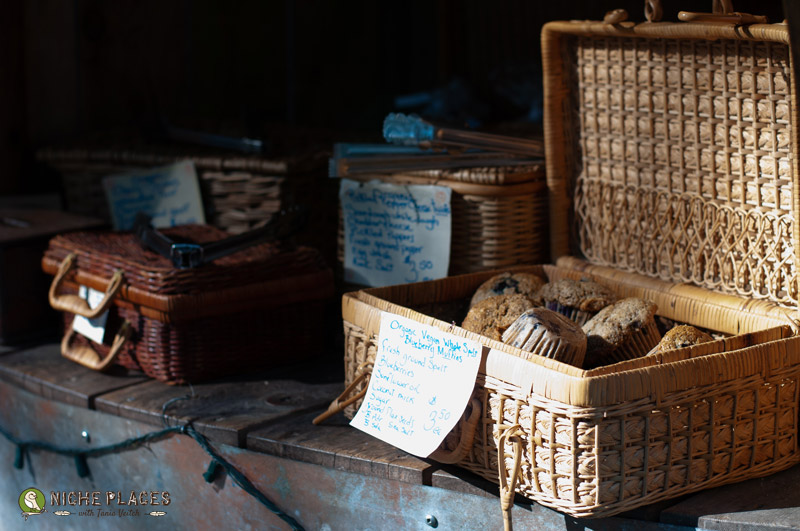 Salt Spring Island has neat “hole in the wall” places or more like “hidden gems in the trees”. For instance, Kizmit Cafe, which sells espresso beverages and baked items, and Humsa, a cool little food truck, are two such places nestled in the woods. You’d never know they existed if it wasn’t for the sandwich board sign sitting at the road.

My curiosity led Silver and I down the drive and I was pleasantly surprised by what I found. This place is definitely niche and totally immersed in the essence of Salt Spring. The next time you vacation on Salt Spring Island, this experience is a must! Check out my Kizmet Cafe & Humsa Food Truck post to learn more! 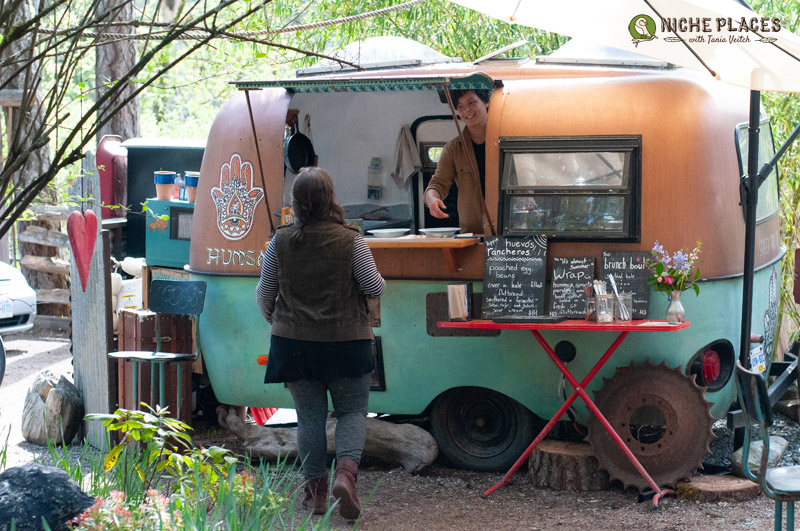 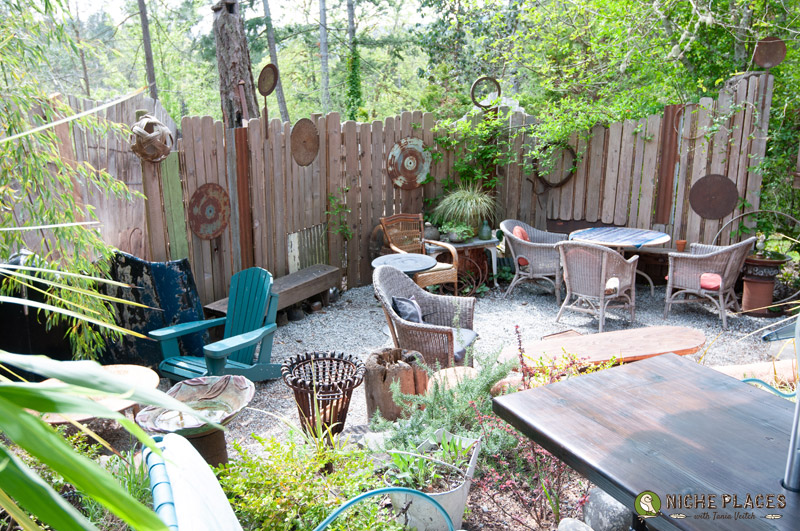 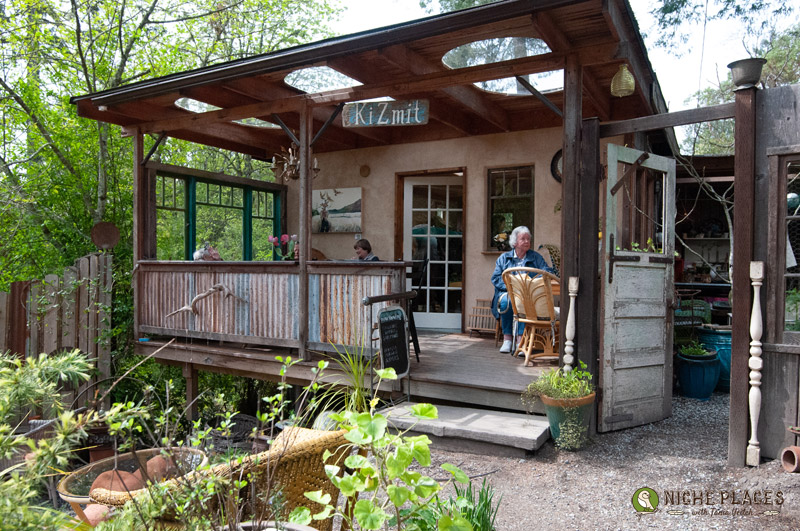 There are many options for accommodations from camping and yoga retreats to quaint vacation homes and B & B’s, including an absolute luxury one.

Again, my curiosity had my head whipping over my right shoulder into the back seat after passing a large Stonehenge standing behind an iron gate. I’ve never been to England but I could have convinced myself that I was all of a sudden there. Lucky for me, the gate was open on one drive-by and I took the opportunity to find out more about it.

I met two women and a large Borzoi dog named Merlin. Get that, named after a wizard. There really are wizards here on Salt Spring! Wink-wink! Unfortunately, I missed my opportunity for a photo of him, but he was tall with a long wavy chestnut coat and long narrow snout. He was as grand as the place itself.

I felt lucky to receive a short tour of the main floor before the next guests arrived. The living area was open with comfy seating and large windows facing the ocean. Fine artwork adorned the place from paintings to a unique acrobatic-like sculpture hanging from the ceilin over a grand piano. Sorry, no inside pics, but you can check out their website at Stonehouse B & B to get an idea!

It would be easy to just breathe and relax here no matter what the weather. The exquisite bedroom suites had large bathrooms and deep soaker tubs. Just imagine the R & R opportunities! On a sunny day like this one, you can explore the expansive grounds and relax with a glass of wine at one of the several flowered outdoor seating areas. And of course there’s the the reason I ended up here in the first place, the Stonehenge with the fire pit in the middle. Imagine that with a loved one, a blanket, and a fancy hot beverage on a clear starry night!

I can only imagine how delicious and creative the breakfasts must be here. Clearly, this B & B delivers a uniquely tranquil experience. 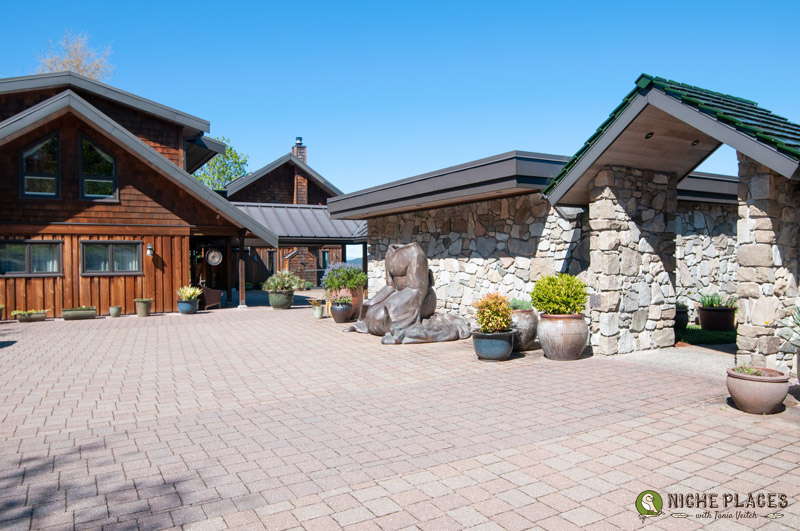 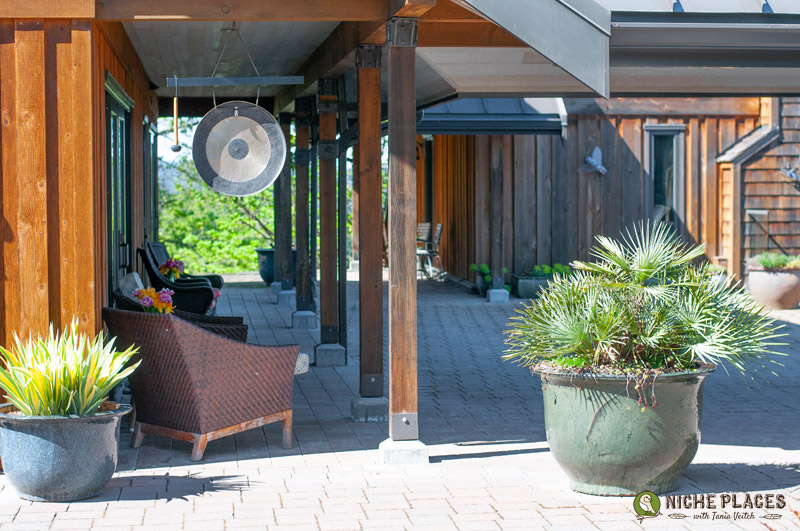 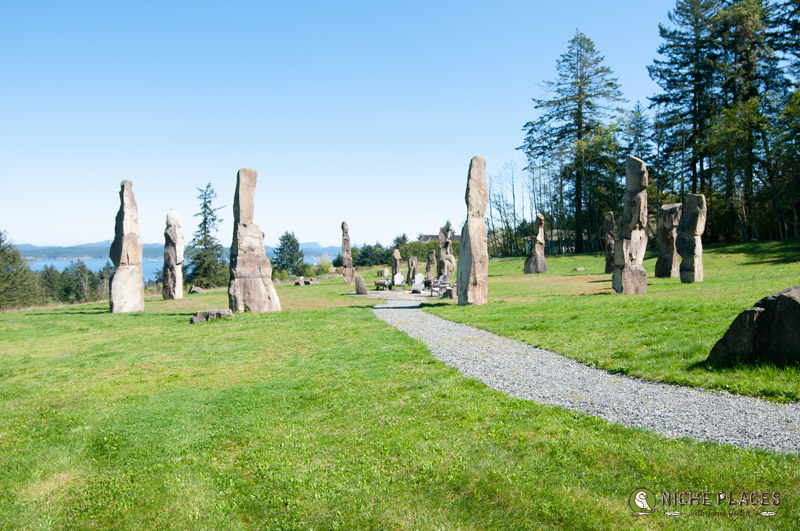 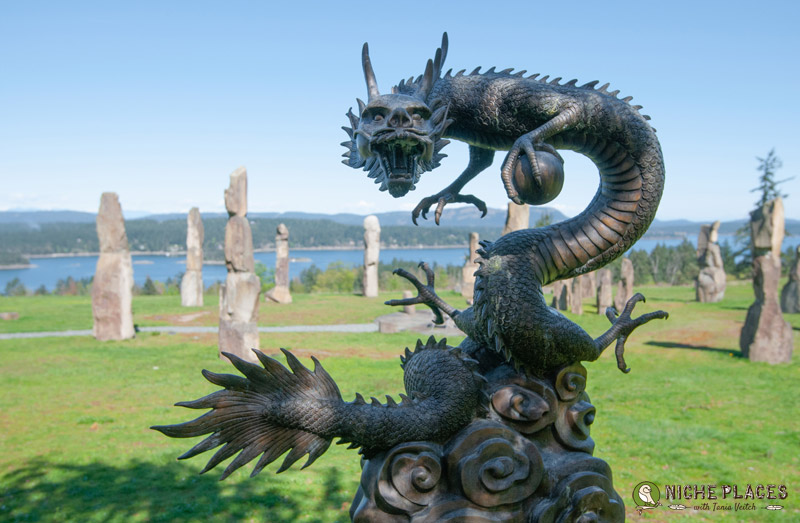 If this doesn’t fit your budget, there are other less luxurious options. This weekend, for instance, I stayed at Mowhinna Creek, a forested campground near Ganges with flush toilets, coin-operated showers, electrical hook-ups and even cables already attached to trees for easy tarp set-up. The caretaker even lent my friend, Martin, his bottle of maple syrup. Again, those friendly Salt Spring Island people! 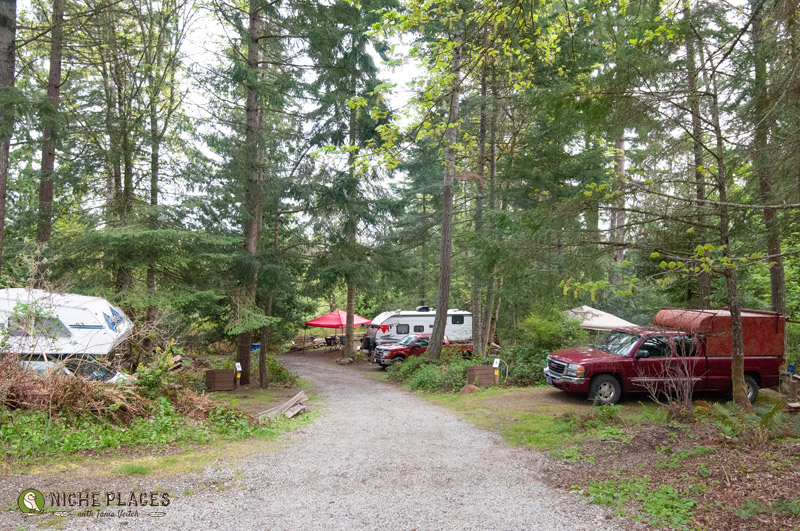 If having the amenities aren’t a big deal to you and you don’t mind walking a short distance, there is also Ruckle Point Provincial Park where you can pitch your tent and have ocean front property for a few days. There are also a few RV spots in the parking lot. 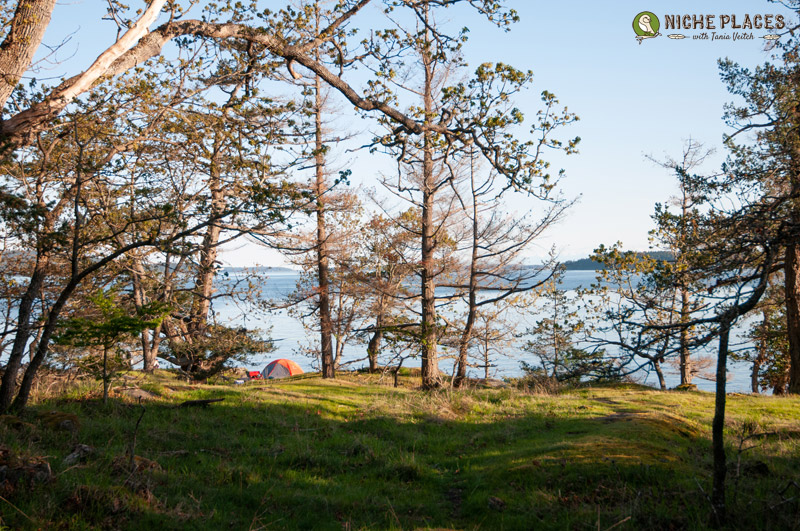 The sites have picnic tables, but no fire pit. There is, however, a communal fire pit. Just imagine the songs and stories to be shared! 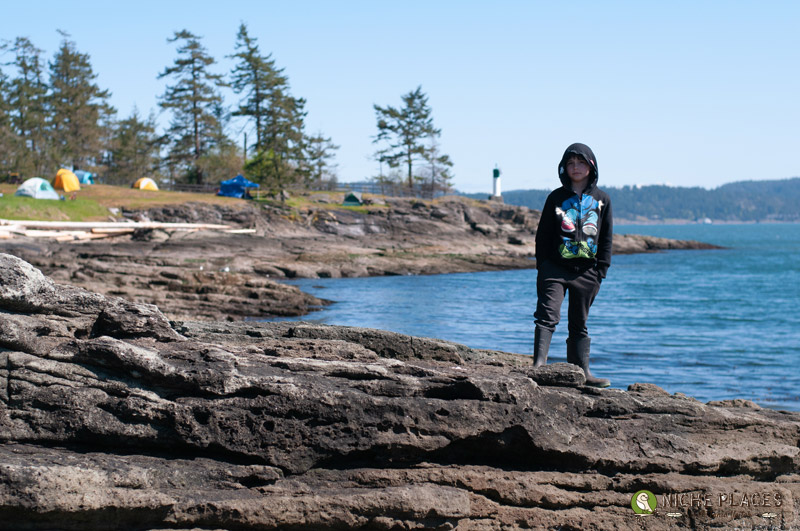 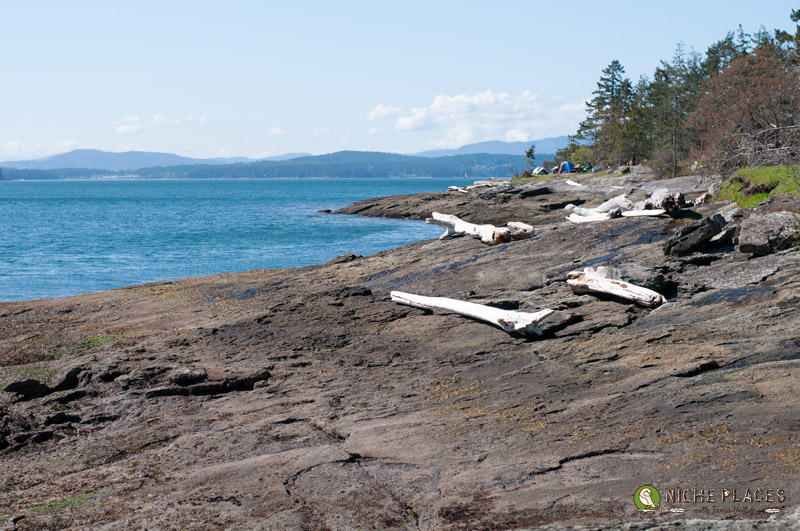 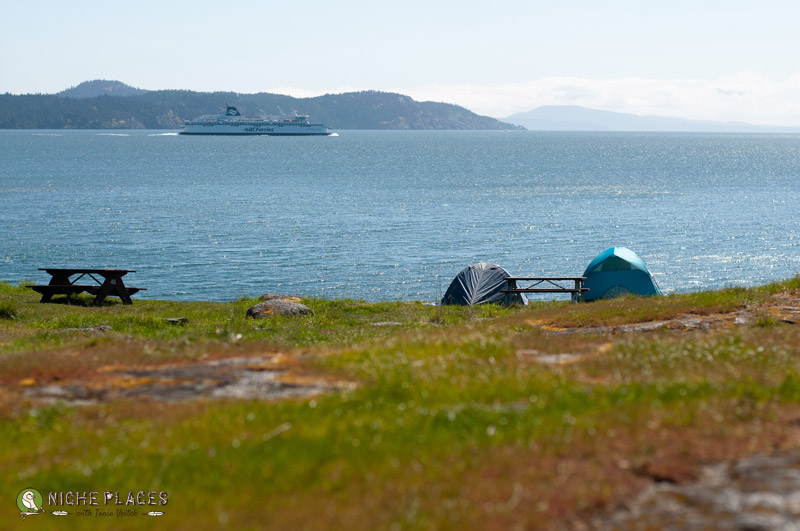 For things to do, you can walk the trail to Ruckle Heritage Farm where you’ll see sheep and may even be greeted by a curious turkey or two. There are also a few lovely spots along the way to sit and read or even fish. 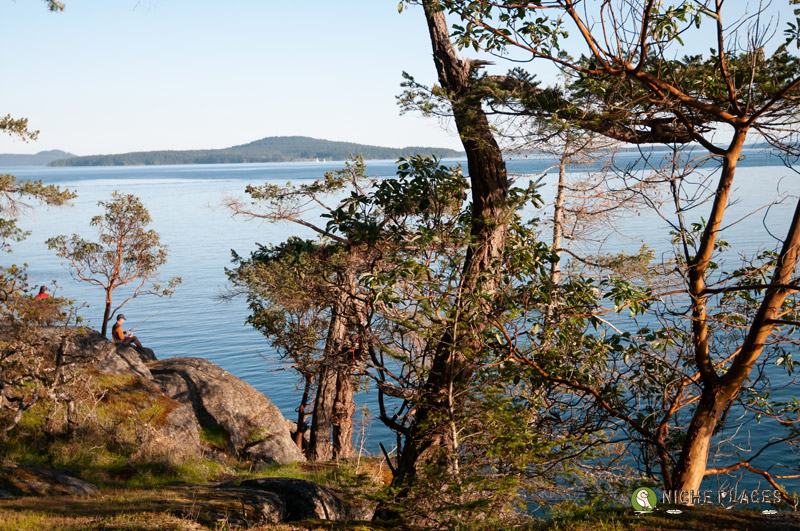 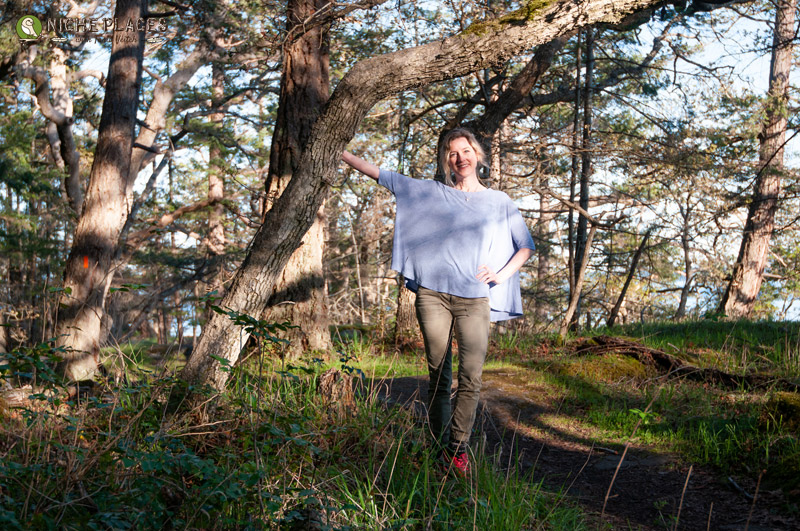 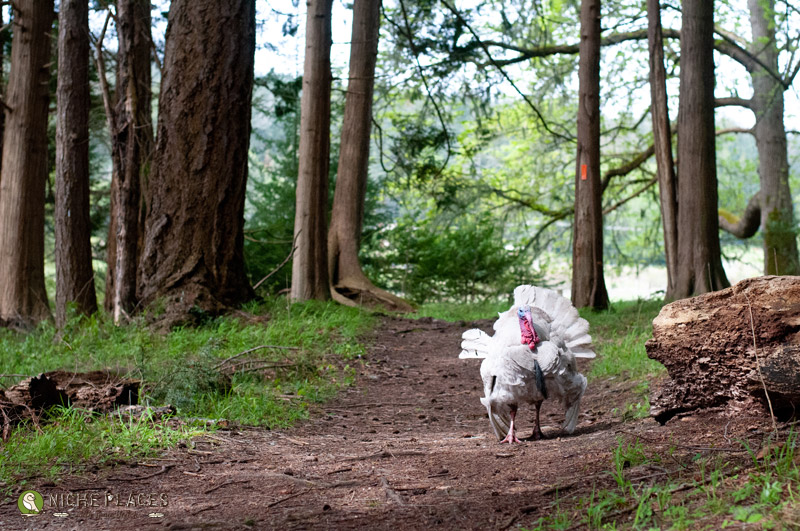 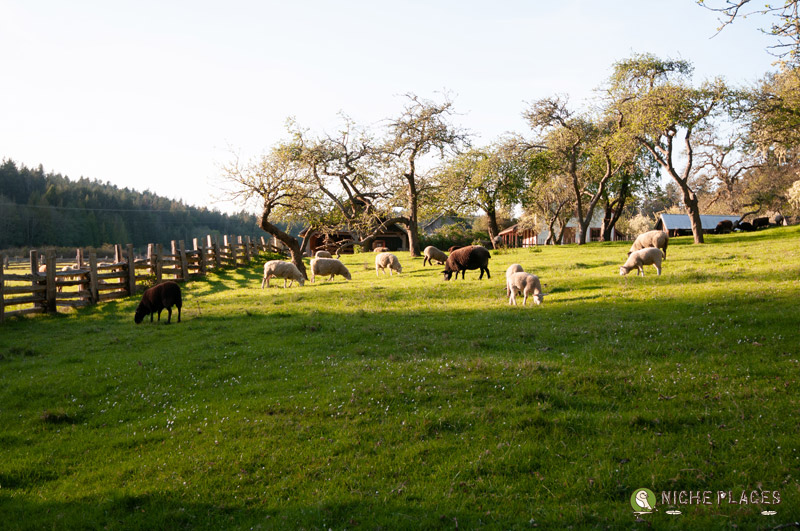 Salt Spring Island has a way of wiping my memory clean of the hustle and bustle outside of it. It transported me to another time in which people lived simply and when life seemed a little less complicated. And ultimately, isn’t that what we’re looking when we choose an Island get-away?

If you’re interested in visiting Salt Spring Island and any of the other Gulf Islands, you may want to pick up a BC Ferries Experience Card to access the islands at big discounts.