Best Beaches To Eat A Sandwich in Tofino

What better way to spend a day in Tofino than at a beach. What makes it even better is a deliciously satisfying picnic sandwich. This summer I have enjoyed some pretty amazing RedCan Gourmet sandwiches at some equally amazing places! Here are a few pairings.

My friend, Jen, and I were off to the Radar Beach trail head to tackle the gauntlet of roots, mud, and a steep rocky decline made easier by ropes. We actually needed to take our flip flops off. Yes, I know, it was a bad choice of footwear. It was massively easier hiking this with bare feet. 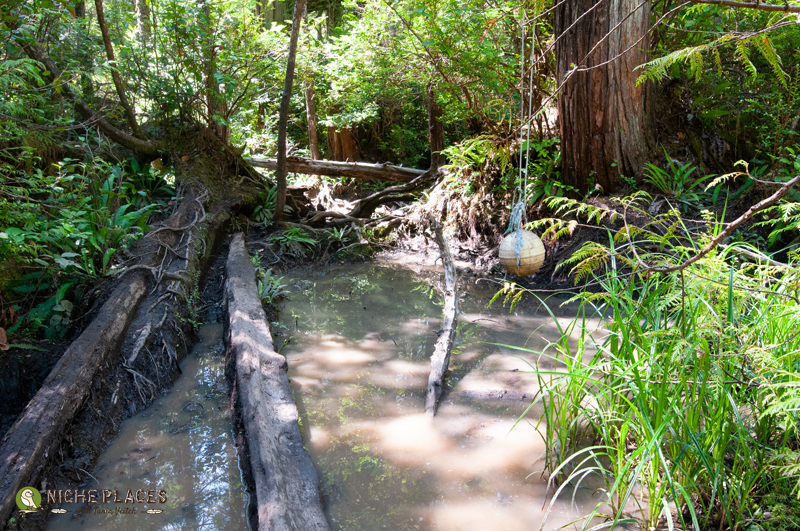 Our reward at the end was a spectacular series of beaches linked by short wooded trails and a scrumptious Turkey-Brie Sandwich made with a baguette fresh out of the oven that morning. 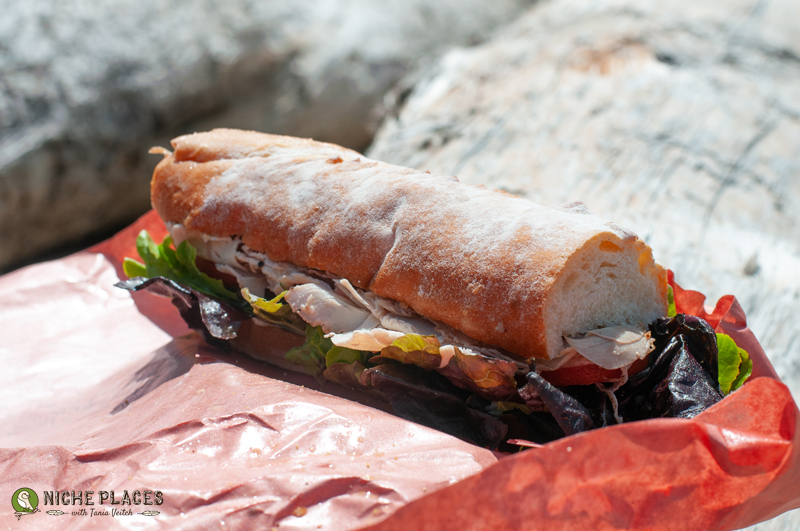 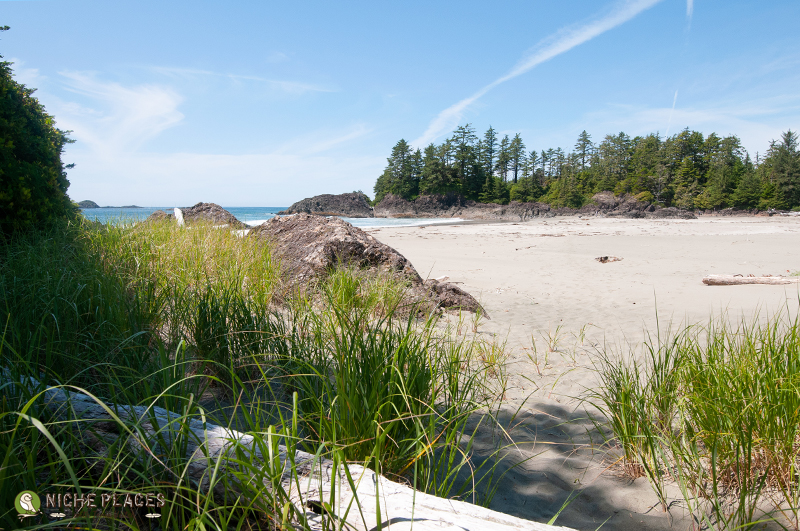 The second sandwich I enjoyed is called the Canadian Supermodel. It’s loaded with freshly sliced shaved meat including beef, turkey and ham as well as crisp lettuce and tomatoes, and cheddar cheese. A tasty mayonnaise spread includes horseradish if you want it. The chef always gives you an option. You can also get the Italian or European Supermodel versions. 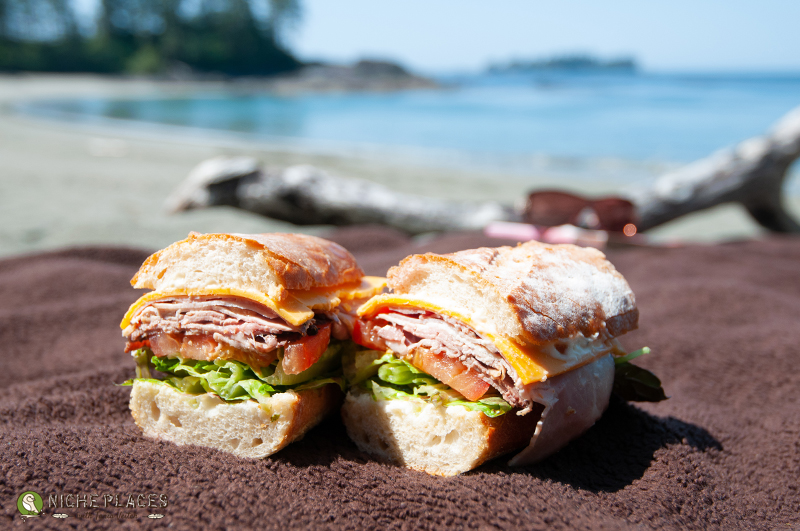 Halfmoon Bay is at the end of a tranquil one-kilometre walk through the woods along a trail and raised boardwalk. To get there drive a short distance past the junction towards Ucluelet. Turn right at the Wya Point Resort sign. The trail head is a short drive up a gravel road. Be sure to have a Parks Canada parking pass! 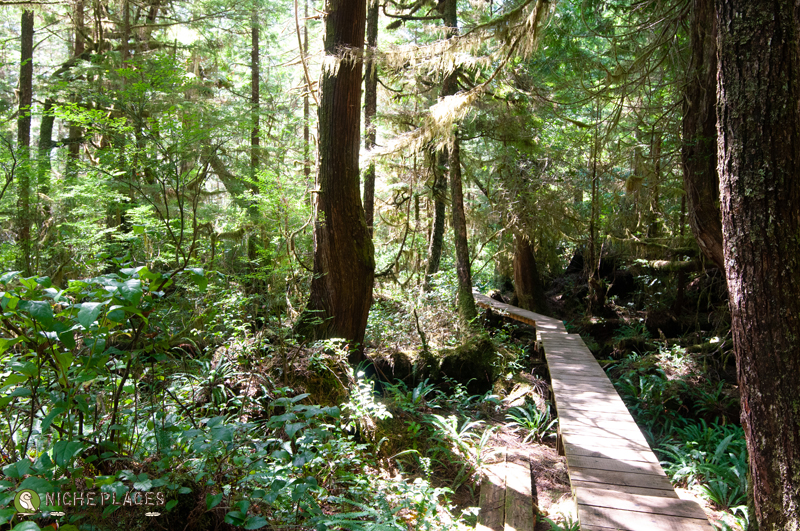 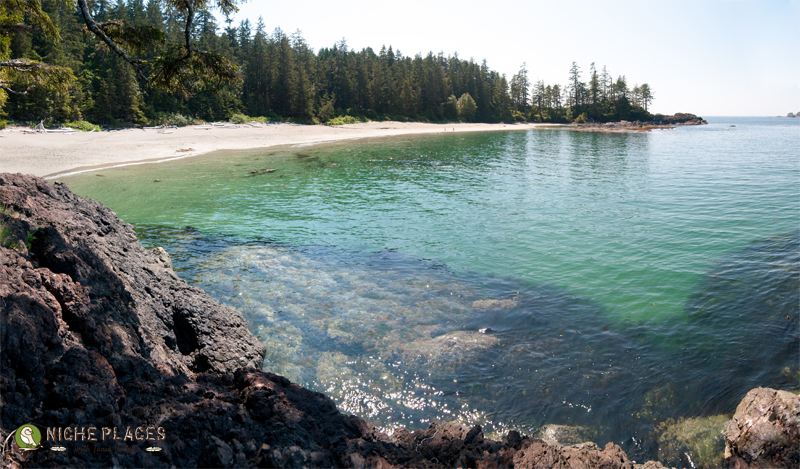 Red Can Gourmet also prepares hot gourmet sandwiches! It’s comfort food made to satisfy the belly and warm the soul. The first one I tried was the Beef Brisket Sandwich. This one is best eaten right away and with several napkins however you can make it to nearby Middle Beach. 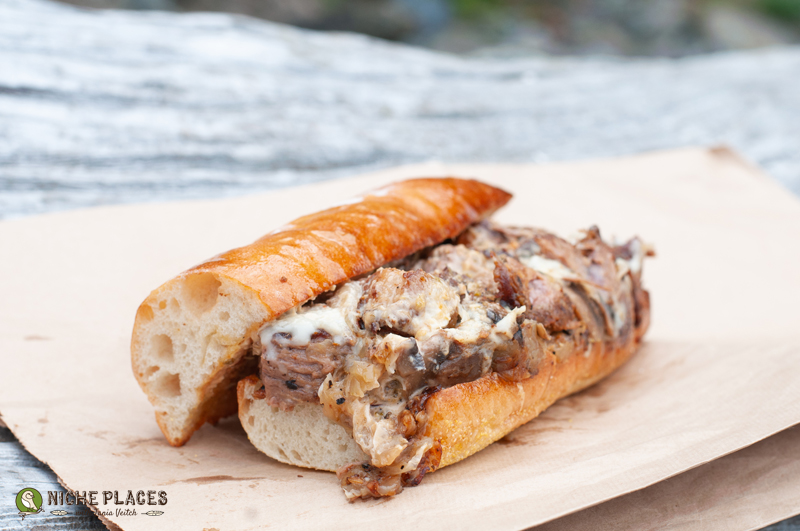 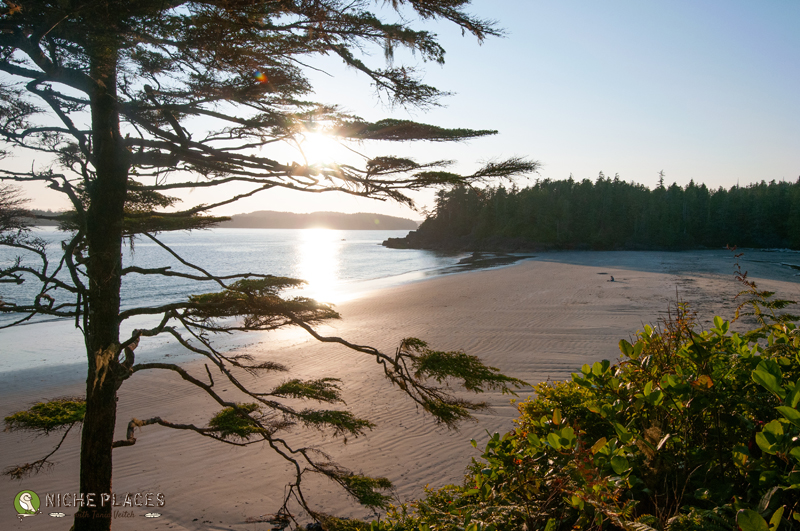 I’ve enjoyed the Beef Brisket sandwich twice so far. I highly recommended it to a fellow standing in line. He was watching me photograph this one while it was being prepared. 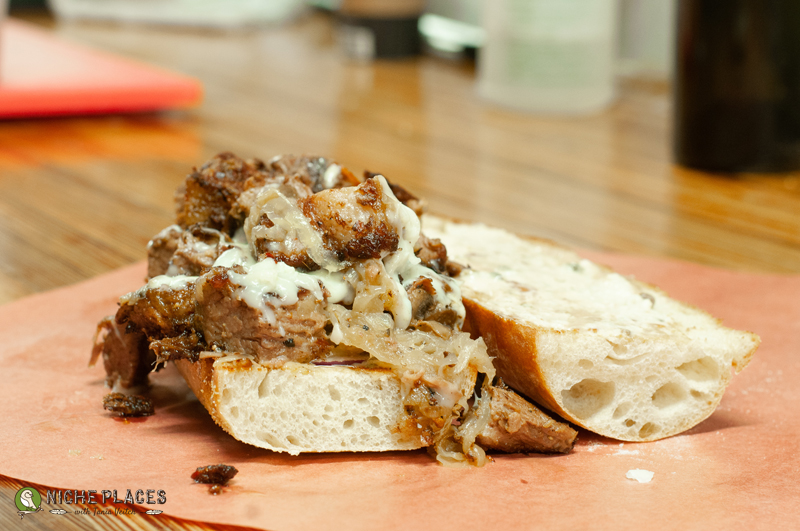 The beef is incredibly tender and juicy. It’s sauteed with carmelized onions and mushrooms, and topped with grated cheese.

The day I devoured the flavour-packed Beef Dip Sandwich I didn’t go to a beach. I was just too dang hungry! Luckily, RedCan has picnic tables if you’re ravenous like I was and can’t wait.

This amazing sandwich fits into my comfort food category. It has so much flavour and substance! 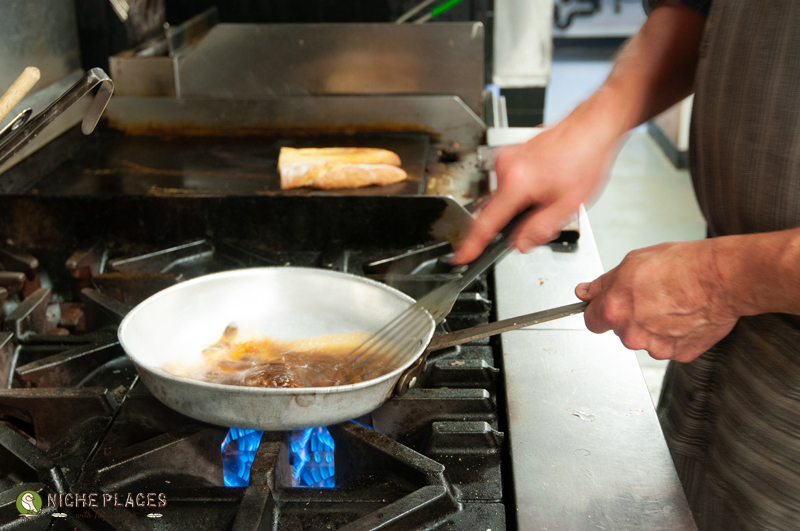 It’s prepared with a veal glaze, chicken stock, drippings from the roasted beef brisket and other braises and then sautéed with oyster and shitake mushrooms, and shallots. 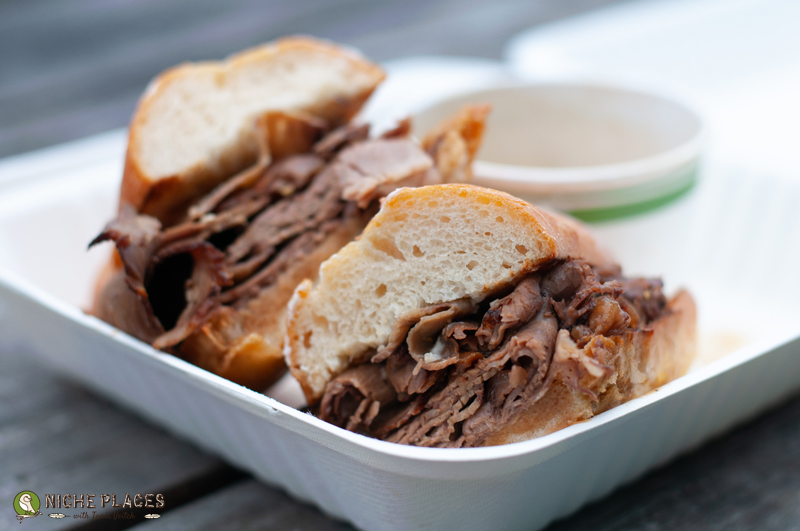 Beef Dip at one of the Red Can Gourmet picnic tables!

“The slower you cook things, the more tender the final product is,” says Tim, who has been cooking for thirty-seven years. Tim’s formal training also includes a background in French Cuisine.

Eighty per cent of the meats Red Can Gourmet uses for sandwiches are prepared on location. Whole turkeys are brought in and broken down and then roasted and sliced. Beef sirloin is cut into three sections, tied, roasted in the oven and sliced. The only thing they don’t prepare is the salami. 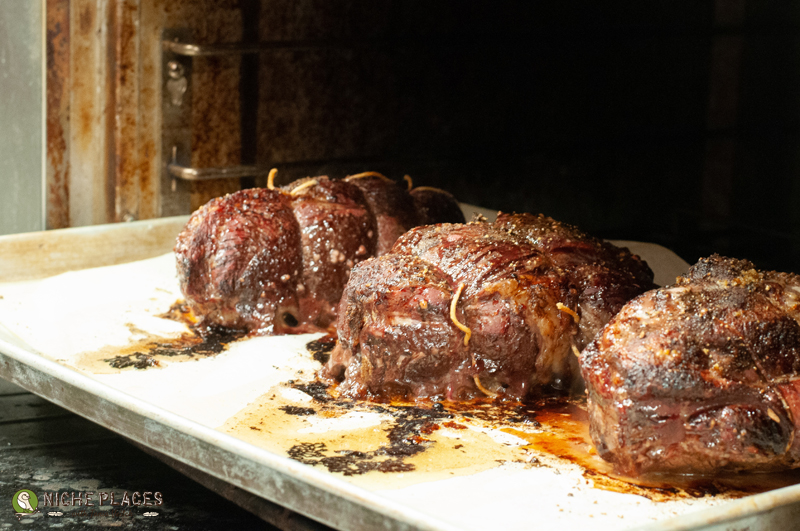 To make the beef brisket so tender, it is first dry-rubbed and then baked slowly in a 225-degree oven for twelve hours. 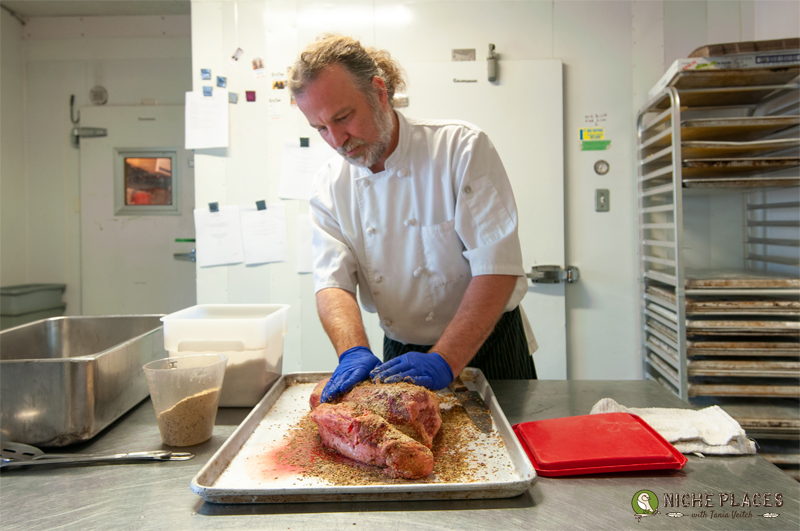 Chef Andrew Giesbrecht applying a rub to a beef brisket

Ingredients are sourced from various suppliers on Vancouver Island and the Mainland. The Tofino-Ucluelet Culinary Guild supplies a great variety of the products they use.

You’ve got to admit that the quality of the bread can make or break a sandwich, right? 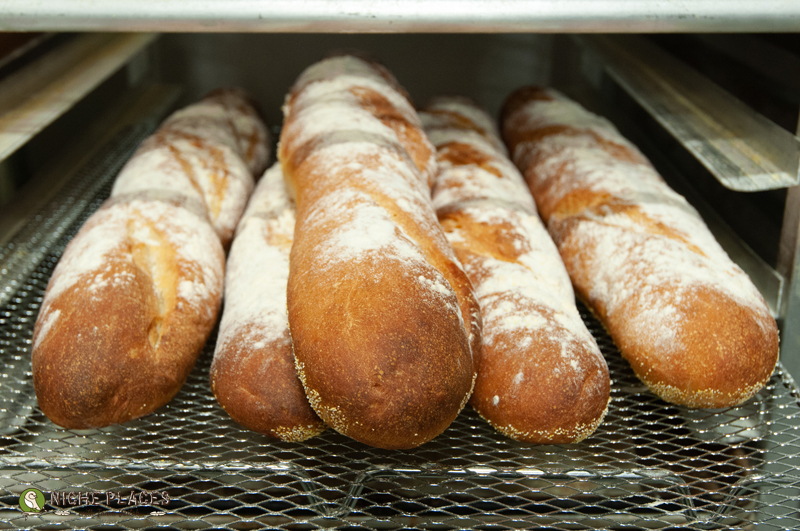 Well, at Red Can Gourmet you can be guaranteed good, fresh bread. Tim prepares and bakes his baguettes daily and I was lucky to witness the process! 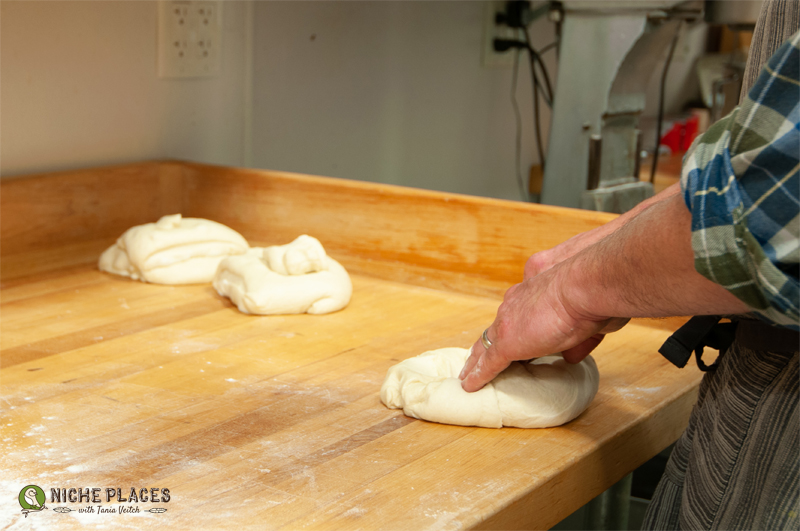 After the dough is prepared, it is cut into sections and weighed. 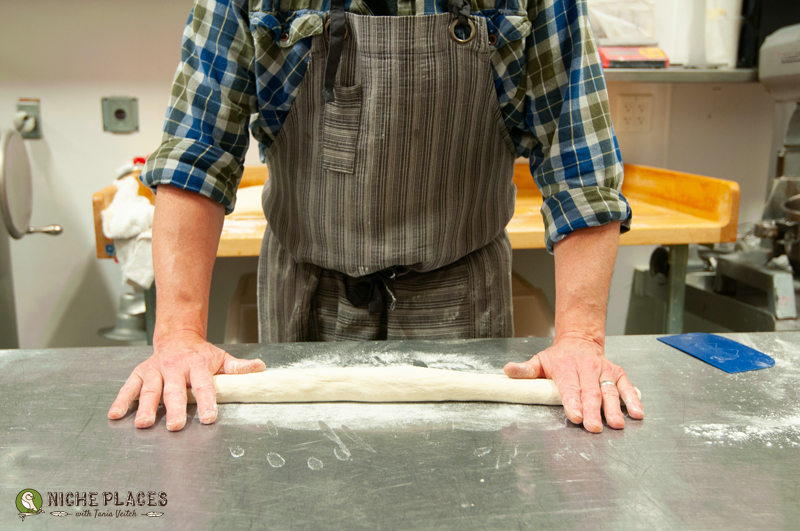 Then it is rolled into long baguettes which are then placed on sheets sprinkled with cornmeal. 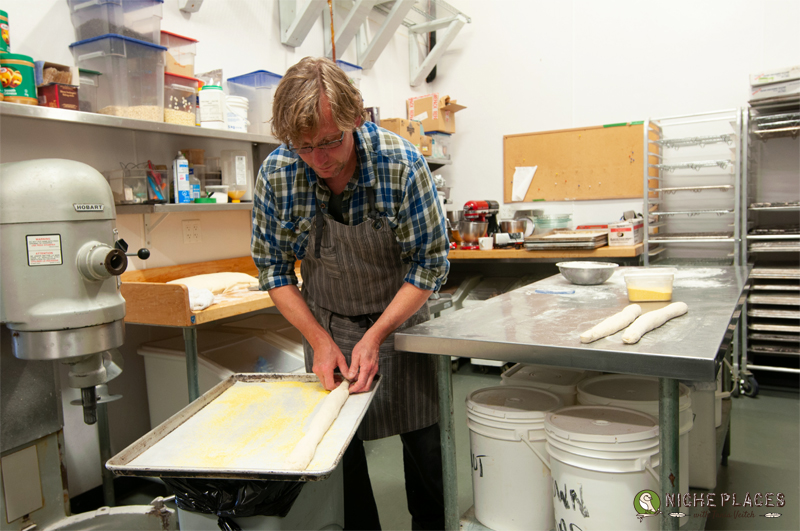 They need to sit for a while in a warm place so the dough can rise. 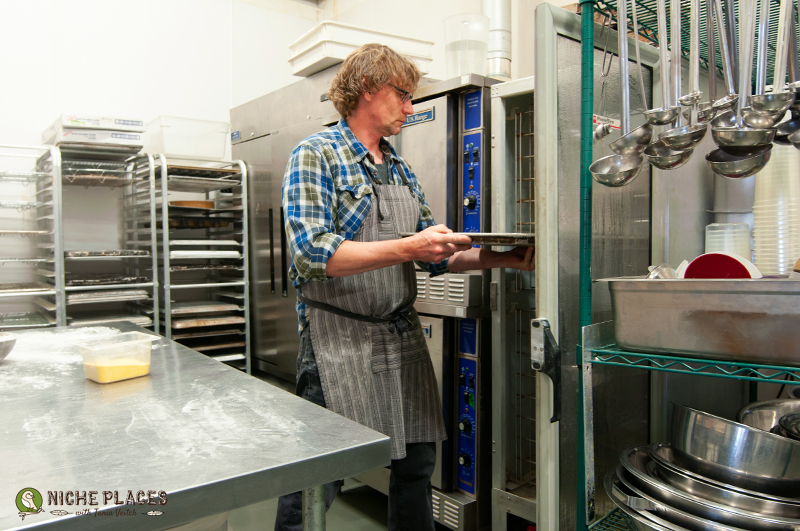 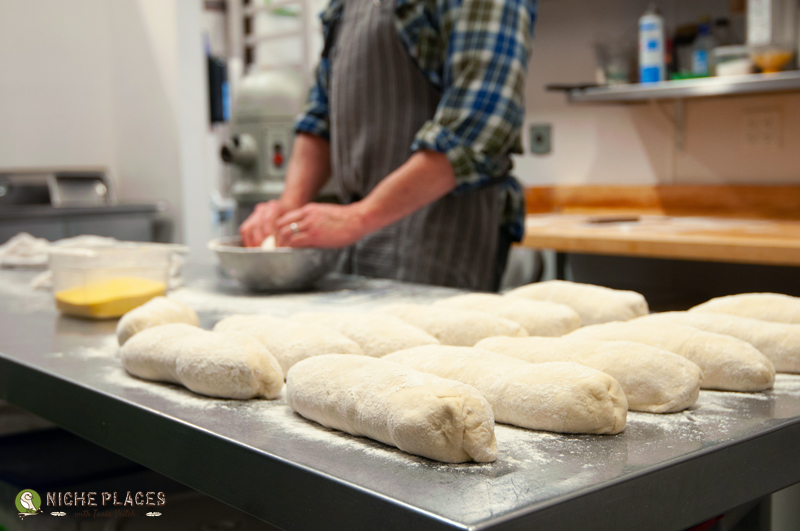 After the dough has risen, the baguettes are sprinkled with flour, rolled out again, and placed onto a baking sheet where the last preparations are made. A few slices with a knife and a sprinkling of flour and they are ready for the oven. 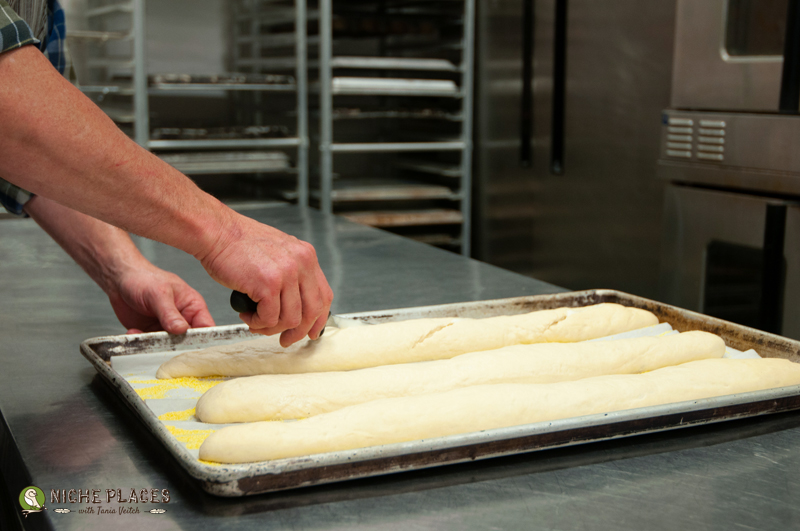 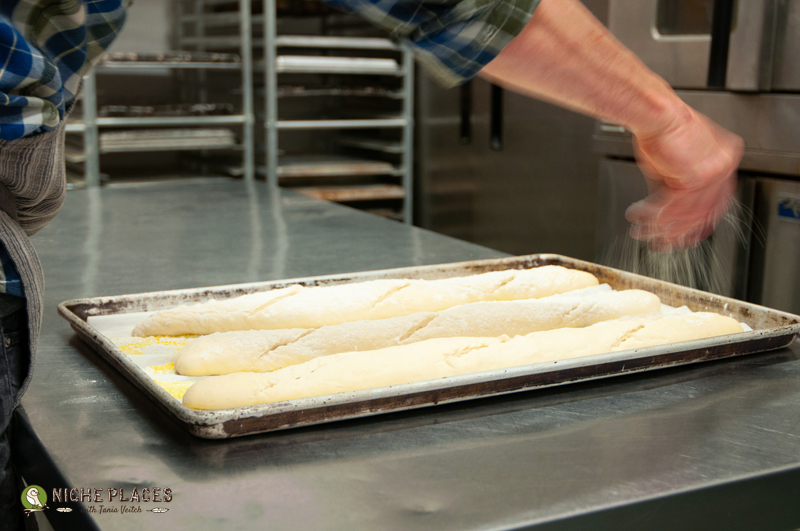 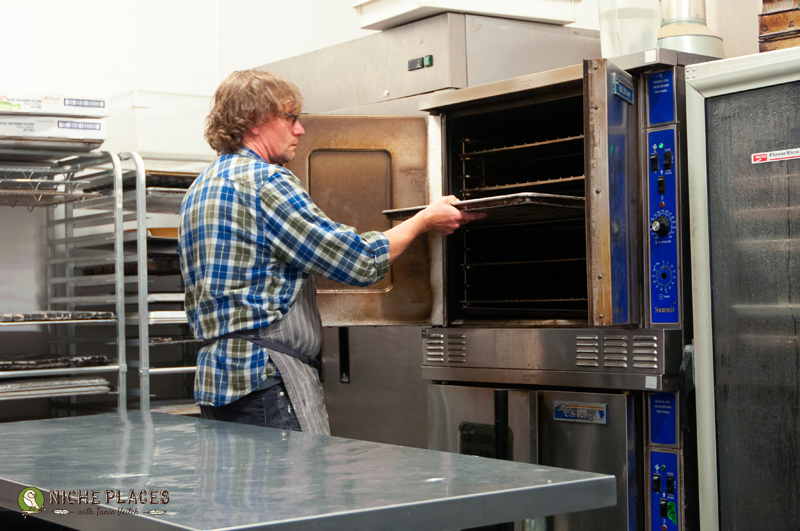 Adding water to the bottom tray ensures a hard golden crust around a soft and fluffy middle. 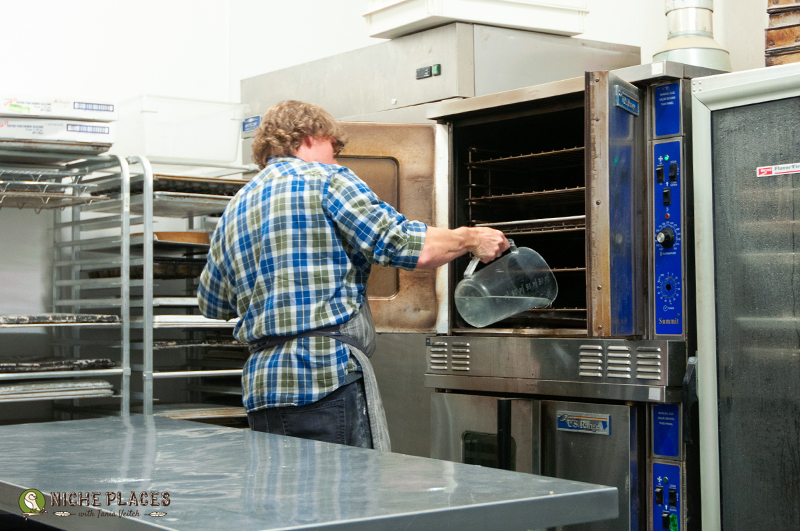 About Chef Tim May

Imagine hitting a bright red buoy with your boat on the way to a place called Deadmans Island. Perhaps, one might consider that an omen. On the other hand, the impact could lead to great inspiration! That’s the case for Chef Tim May and Red Can Gourmet after he hit the “red can” on the way home from hockey one evening. 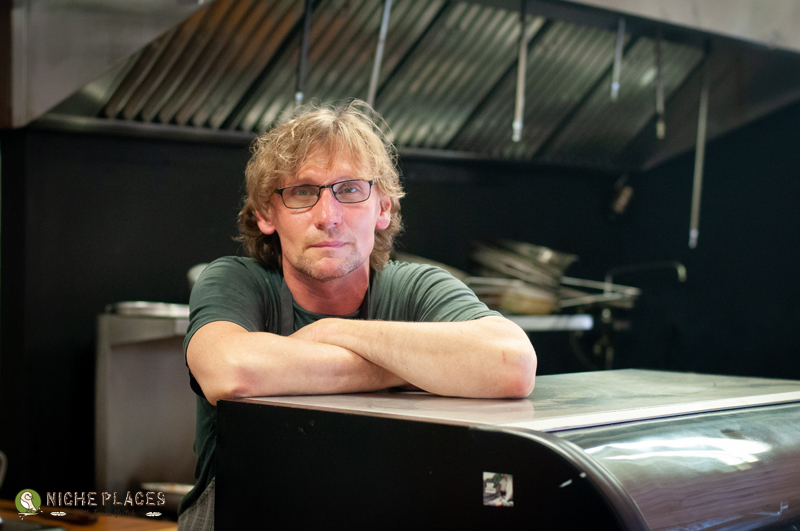 Chef Tim May is originally from Toronto and moved to Whistler in 1990 where he learned all about farm to table food preparation at Chateau Whistler Resort under Chef Bernard Casavant and Chef Rodney Butters.

He has worked in major hotels over the years including thirteen years at Clayoquot Wilderness Resort where he created their food and beverage program. Later, Tim opened Red Can Gourmet which offers catering for groups between six and three-hundred people.

Tim’s catering business has taken off. Tofino is a hot spot wedding destination and a travelers paradise. People request him for cooking demonstrations and even as a personal chef!

The deli is open between 11:00 am and 8:00 pm from Wednesday through Saturdays most weeks if you want to get a sandwich to go. They even make pizzas! Find RedCan Gourmet at 700 Industrial Way, Tofino, BC. Visit their website or contact them at 250-725-2525. 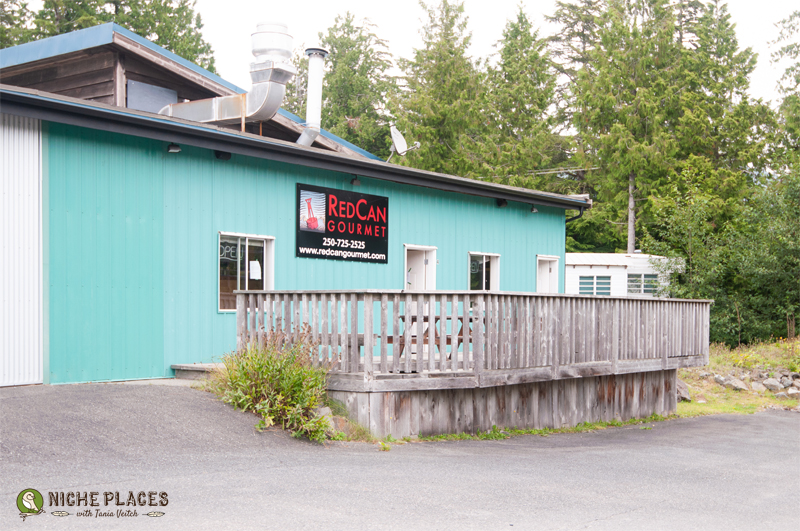 A Must-Visit Cafe Loads Of Personality And Tasty Treats

You’ve Got This! Learn to Surf the Right Way!