As I write, I’m laying on the top bunk of an albergue in Logroño in the most nasty, achy muscular pain. I’m so stiff after a 28 kilometre day today.

This morning I headed out on the road from Los Arcos with Ian from Brazil, the drunken guy who tried to strike up conversation with me and Andrew last night in the attic. Thankfully he was not too badly hung over this morning.

Ian told me a funny story about the albergue we stayed in last night. It had a masseuse, so he took advantage of the opportunity before he went out on the town and got liquored up on Rioja. The masseuse did a good job of relieving Ian’s aching muscles, however as the session was ending he asked him if he wanted it to be a happy one. You know, a “happy ending”.

Ian was quite surprised and declined the extra service. He had warned Andrew earlier yesterday evening just in case he was considering a massage for himself. Andrew told me about it last night, but I forgot to mention it.

As Ian and I walked today, I got to hear a few additional details to the story. During the night Ian had gone downstairs to the washroom and, poof, like a genie the masseuse appeared at the urinal beside him – an awkward moment indeed.

Ian turned out to be a nice young man in his early thirties. It’s always tough to judge someone’s personality when they are slurring drunk and having difficulty keeping upright, so I’m glad we got to walk and converse under more sober circumstances today.

Although Ian is originally from Brazil, he currently lives in Dublin, Ireland and has a nine-year old daughter named Yasmin. Her name is tattooed on his left arm. He is hoping that Yasmin will walk the Camino with him one day. Like many of us Ian is walking the Camino to figure out the next steps to take in his life. He believes in God, but does not follow a structured religion. 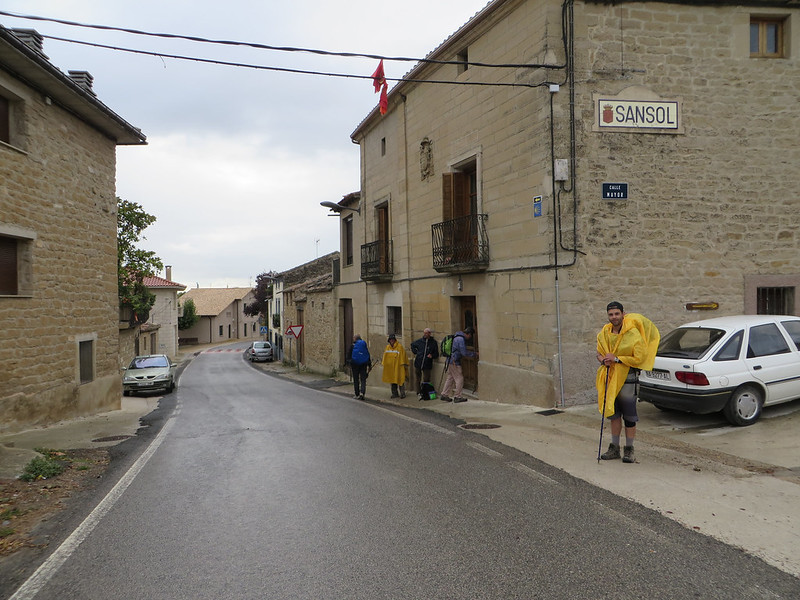 We walked into the small village of Sansol where we detoured down a side street to buy some fruit, bread, cheese and olives. It was only 10:30 a.m., but we decided to have an early lunch under a covered patio to stay dry. It was beginning to rain. We visited with some other pilgrims while we cut up a baguette and some cheese for sandwiches. 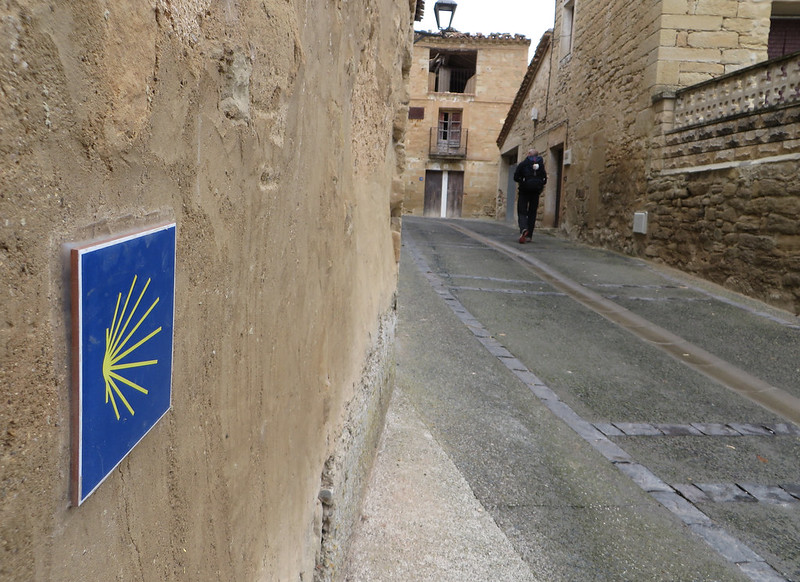 After leaving Sansol we raided a vineyard and continued walking, talking and munching on grapes until we reached Viana, Ian’s stop. 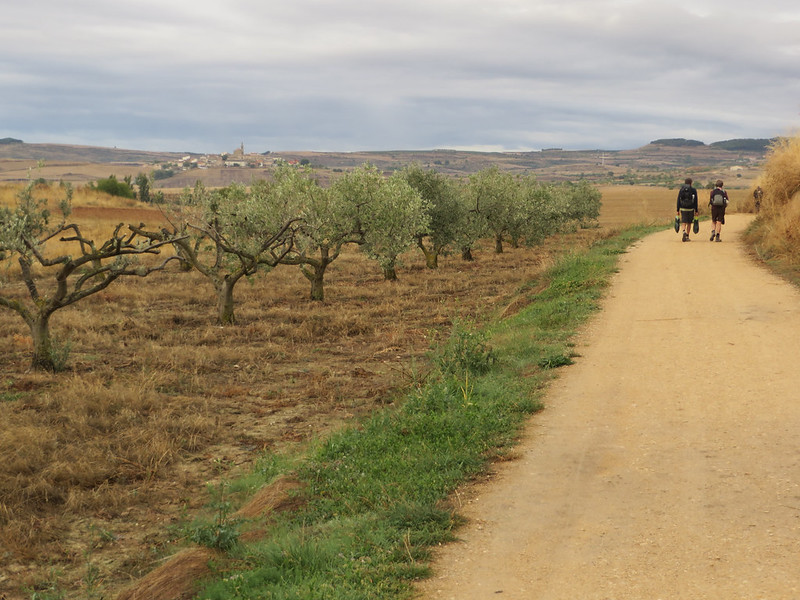 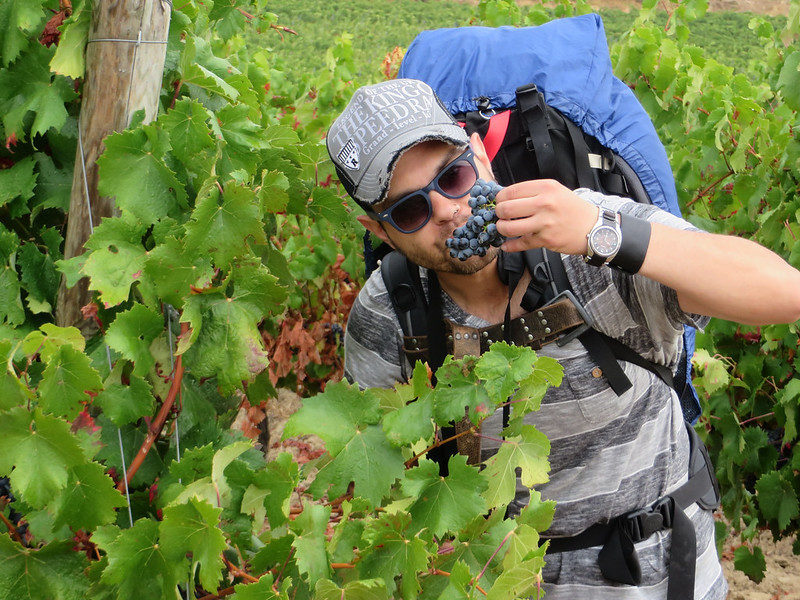 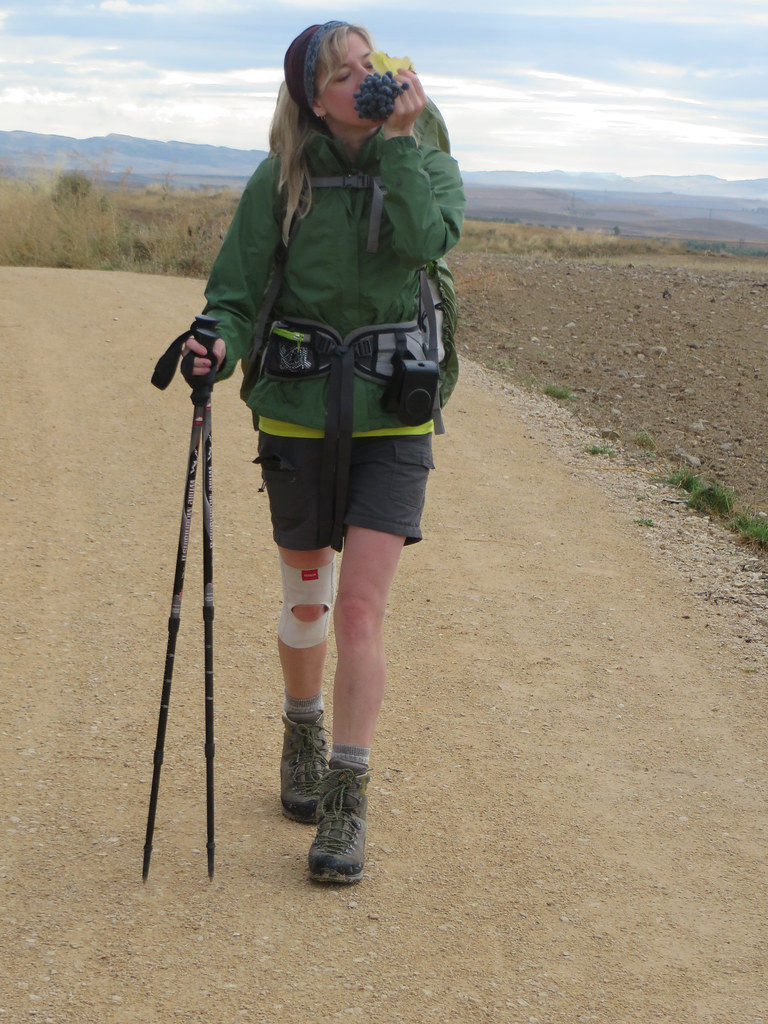 The scenery along the way was spectacular. 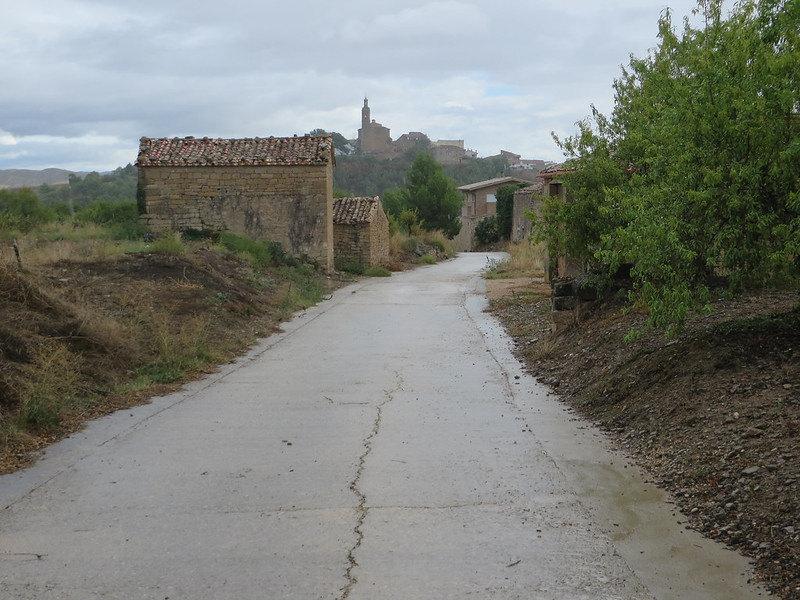 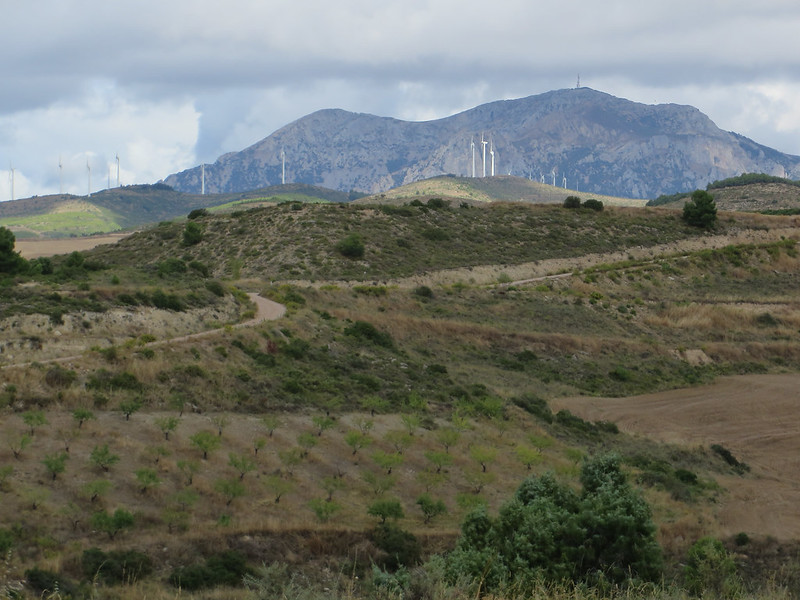 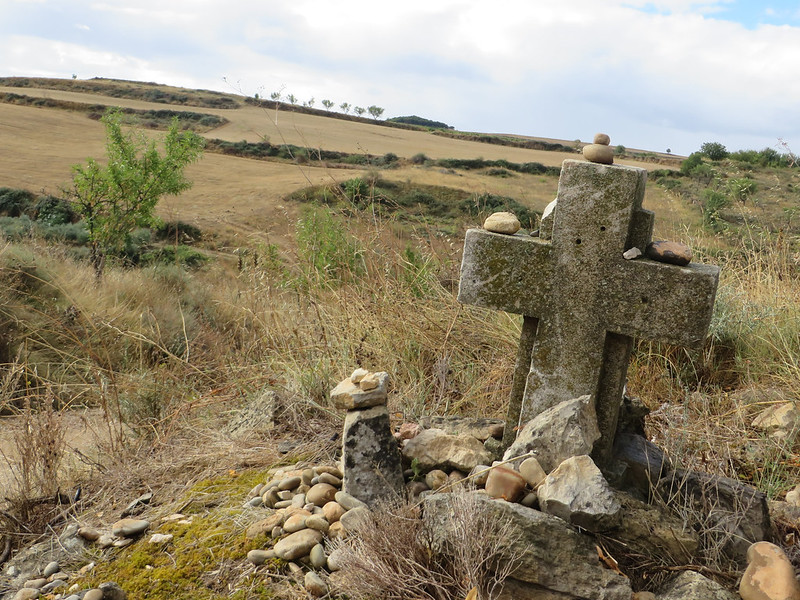 However, sometimes you need to walk along roadways or cross a highway via an underpass or overpass. 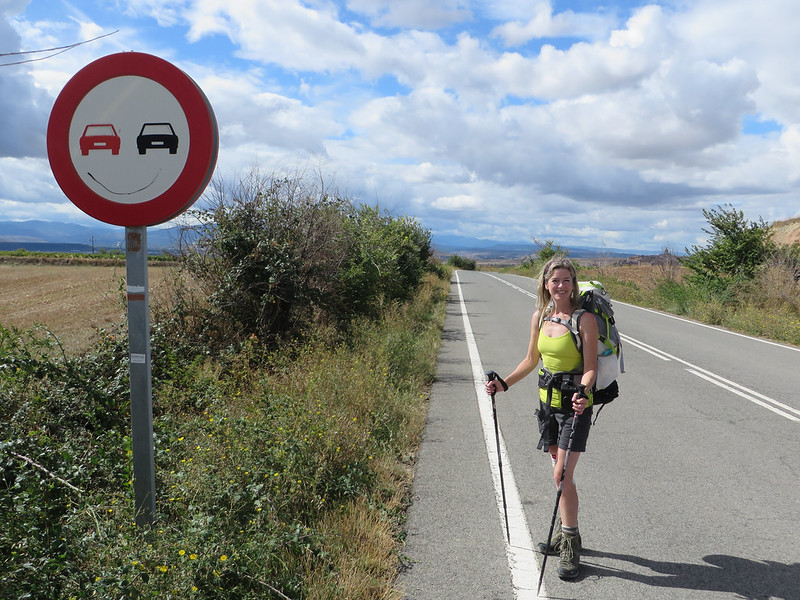 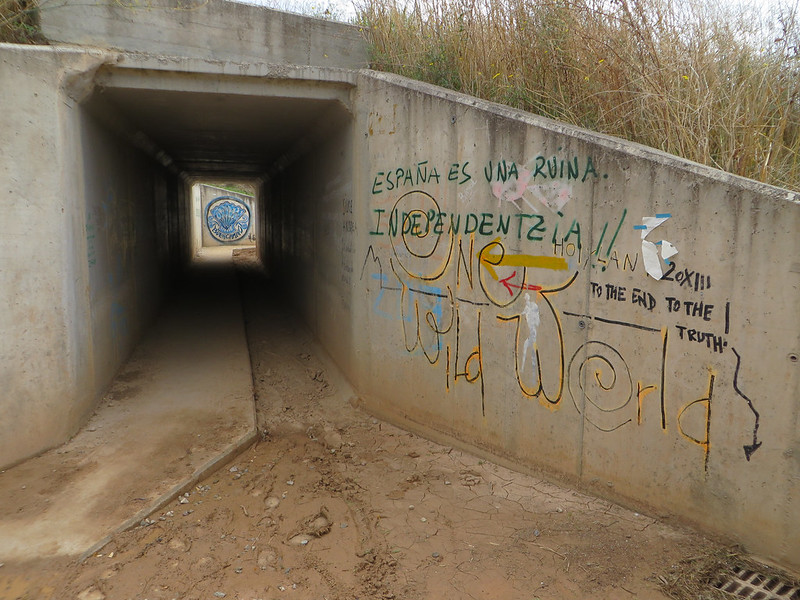 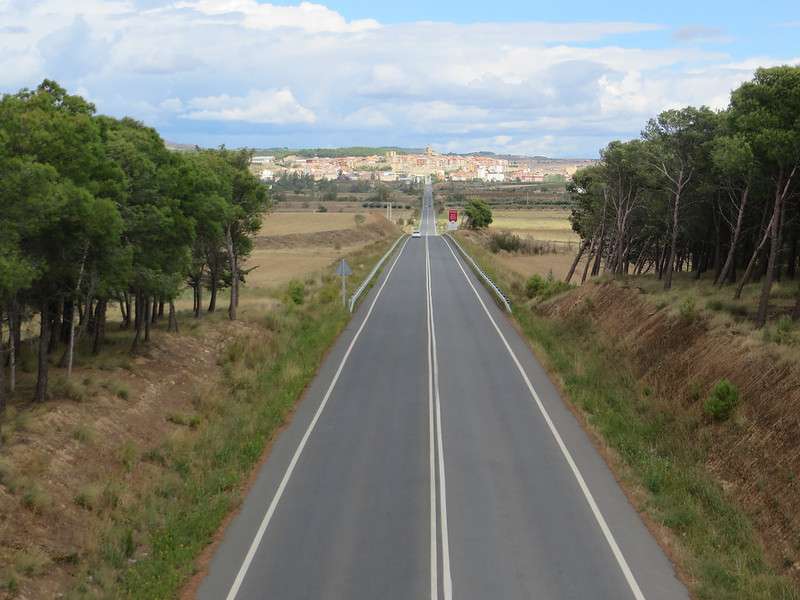 But much of it was along a relaxing gravel path sometimes shared with the local sheep herds. 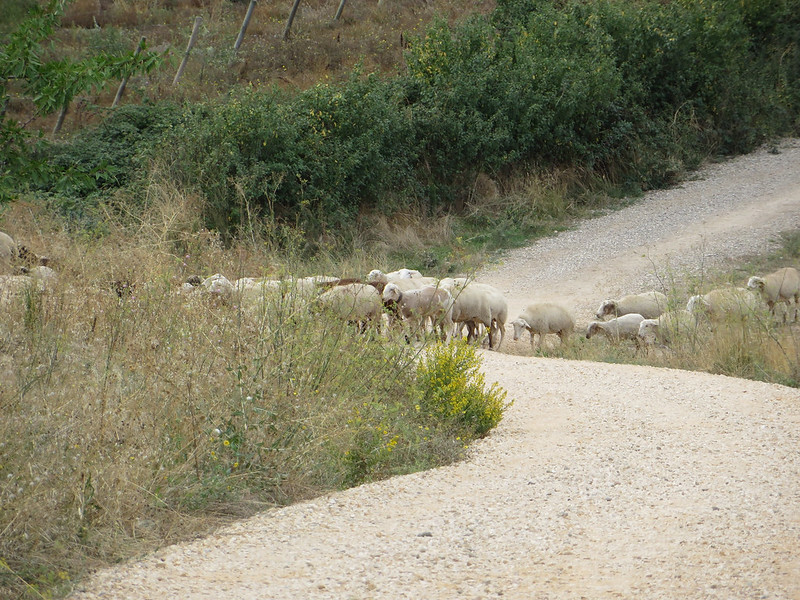 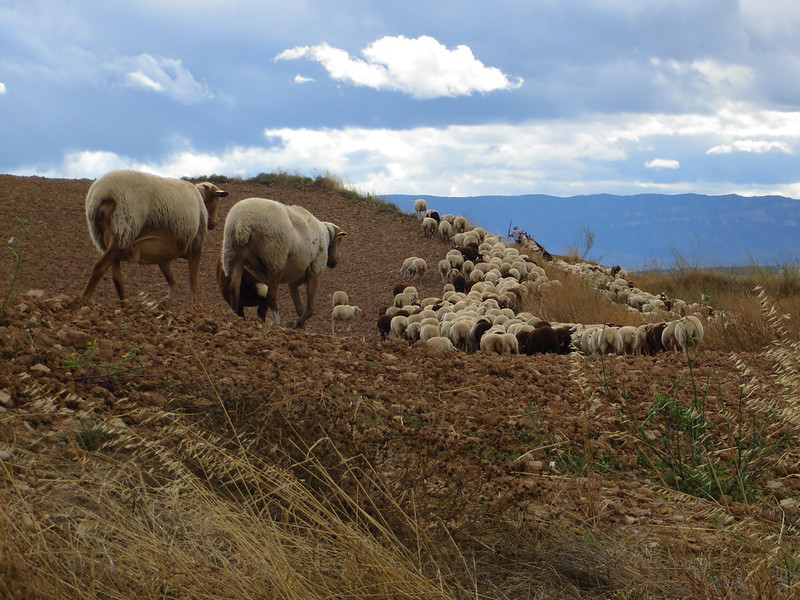 It was time to say goodbye to Ian. He had asked if I was going to stop too, but I was set on getting to Logroño. 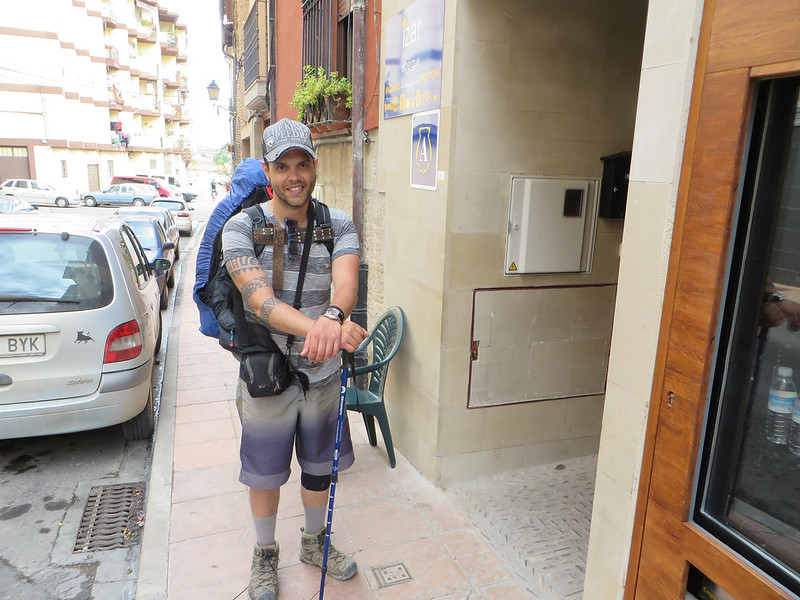 Viana is a small, medieval-looking town with a large plaza surrounded by bars. It would have been an interesting place to stop and explore, but I was on a mission. 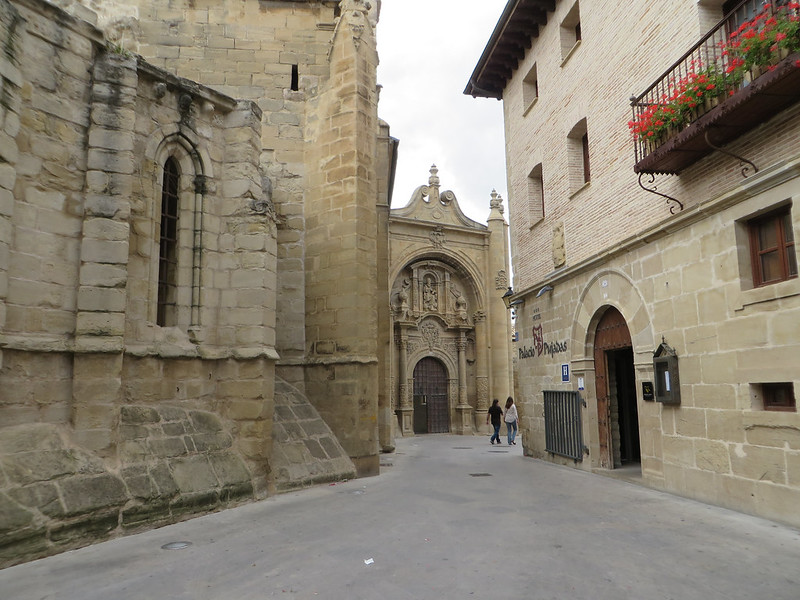 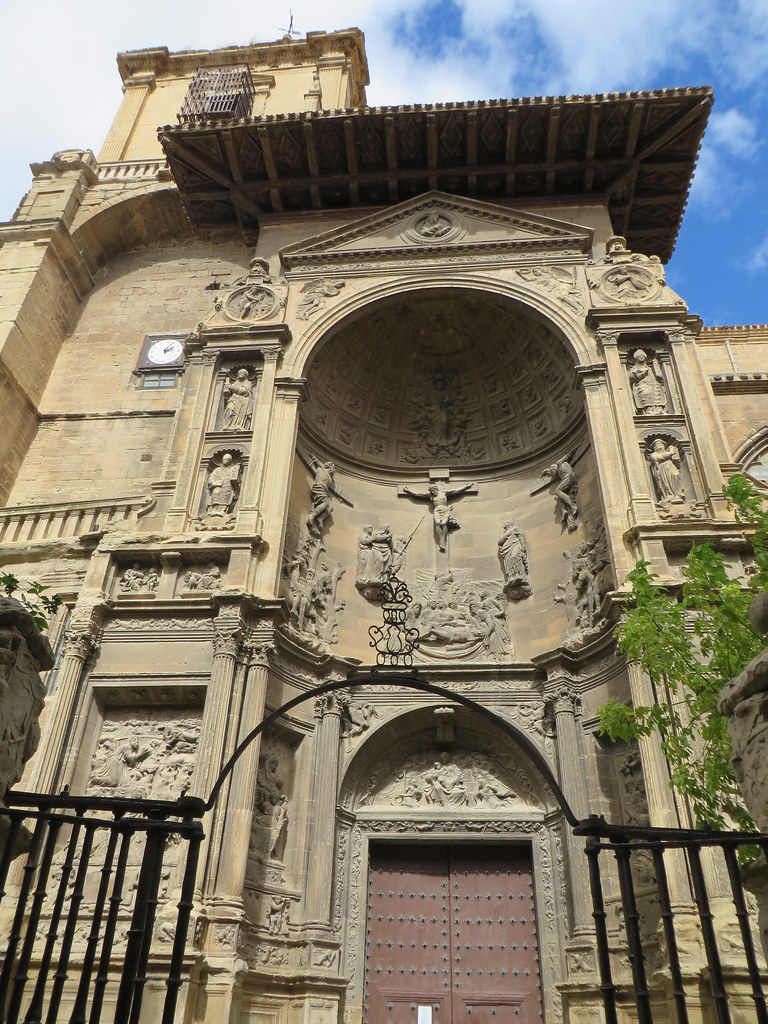 As I paced along a sidewalk on the outskirts of Logroño I observed an interesting-looking fellow crossing the street. His eyes hid mysteriously behind dark aviator sun glasses. He wore a backpack and carried a small classical guitar – obviously another pilgrim. 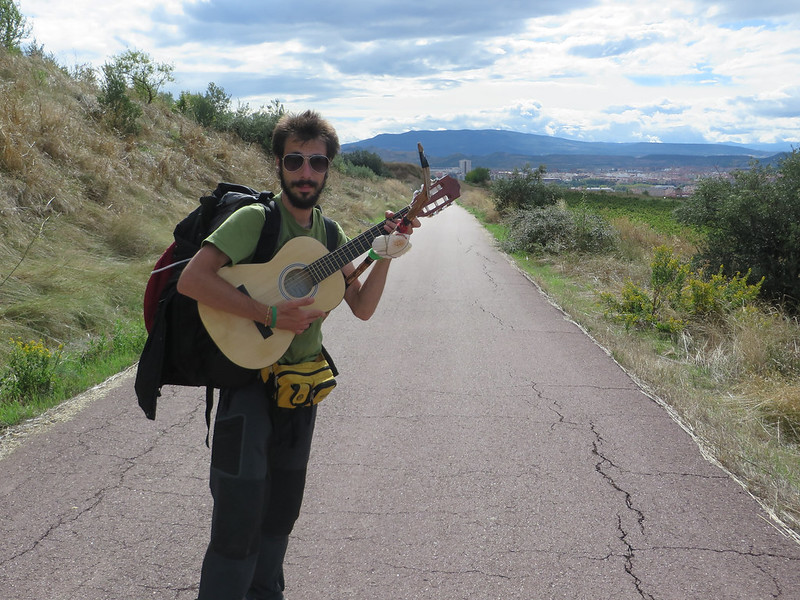 We arrived at the same point along the sidewalk and naturally fell into stride together.

His name is Peter, from Tuscany, Italy. Peter is part of a band back home and is walking the Camino looking for inspiration to write music. He bought his guitar along the way in Pamplona. He also carries a tent since he is on a low budget of 18 euro per day. To save money he has been camping in fields and purchasing food from supermarkets.

It’s interesting to talk to other pilgrims and find out why they are walking and the different ways they experience it. There are many ways depending on time, money and physical ability.

When we reached the city limits of Logroño we wished each other buen camino and then I watched him, with guitar in hand, walk into a field of long grass where he would pitch his tent for the night.

Although, walking the Camino in this way is more economical, it’s not how I would want to walk it. It would be sad to miss out on all the camaraderie in the albergues, however it would definitely be quieter – no snoring.

I sat down on a bench and fished the guide book from the outside pocket of my backpack. Stage seven had some advice on recommended albergues to stay at in Logroño.

This is also the city where I mailed three kilos of my belongings to from St. Jean Pied de Port so, I also needed to find out where the post office was. The plan is to send the parcel off again, but this time the remaining distance to Santiago and with more weight added. I am done with carrying 12 kilos! 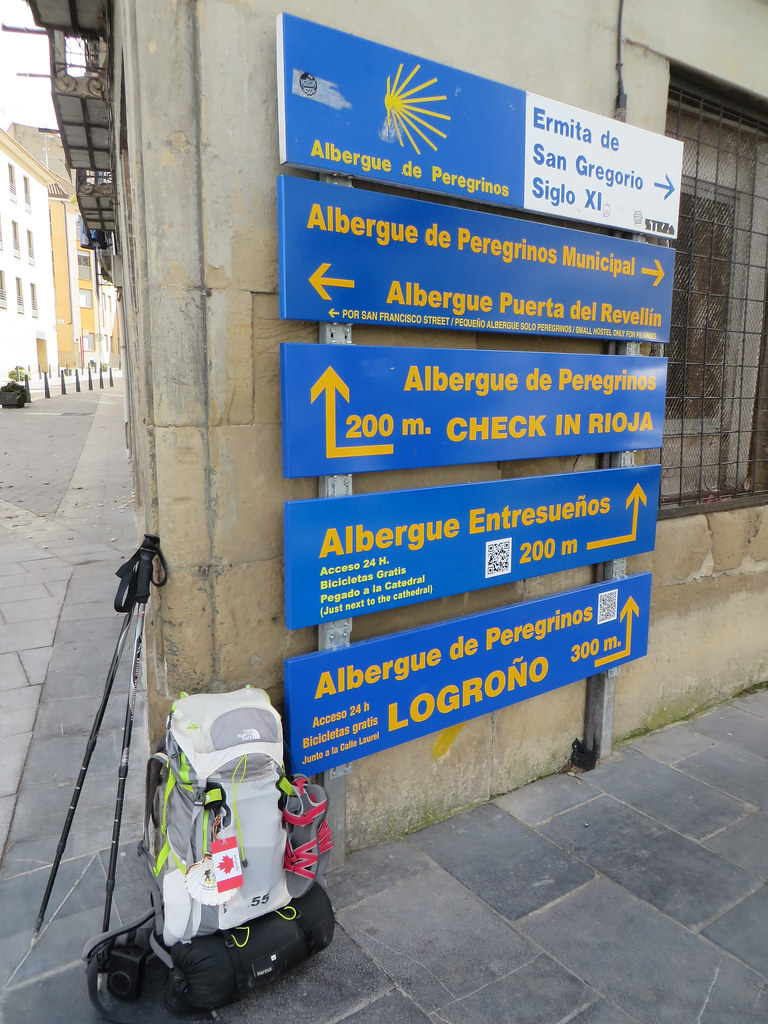 I dragged my sorry butt into the city centre and tried to find an albergue. Many were full. A woman stopped and said, “You look lost,” as I stood bent over trying to put most of my weight on my poles. My hips and feet were so achy! She gave me a card to where she was staying, the Estresuenos. It’s quite nice. 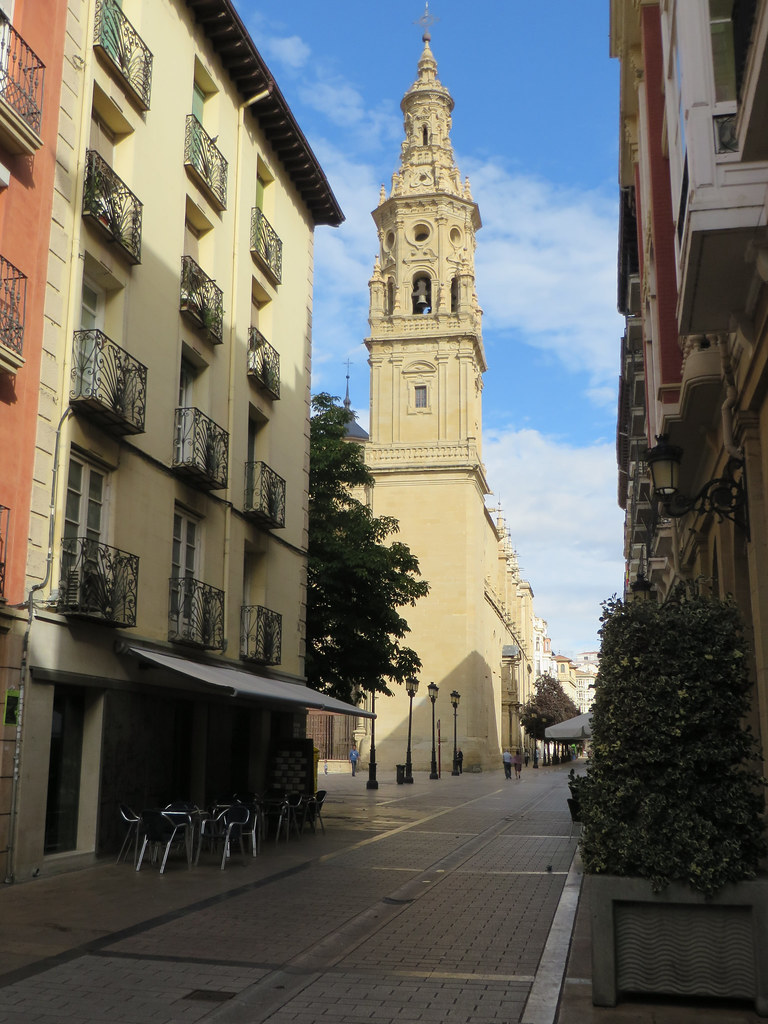 After I squared up with the hospitaleros, I stiffly made my way upstairs to the dorm, offloaded my pack and then pain-stakingly retrieved my clothes, towel and toiletries for a much needed shower.

Slowly, I shuffled across the granite floor to the washroom where I had a difficult time opening the door. After turning and pulling the knob for a couple minutes with no result, I sat down on the floor and waited for someone to open it from the inside. I was so tired of standing. A woman eventually came out, shook her head and cooed a few words in French at the sight of me. I think she felt sorry for me.

After my hot shower I dragged myself back to the dorm, climbed into my top bunk and here I am. I have met some great people from South Africa, however I’m so dead that I can’t remember their names. They asked if I wanted to go for dinner with them, but I thought I should lay here for a while and let my body somewhat heal. I told them I would be out later and keep an eye out for them. Oh, and it’s funny, the lady who gave me the card to this place is sleeping right beside me!

Alright, I’m heading out now. I’m very hungry and I’m hearing someone outside singing at the top of their lungs in another language. Maybe there’s a party tonight! Adios for now!