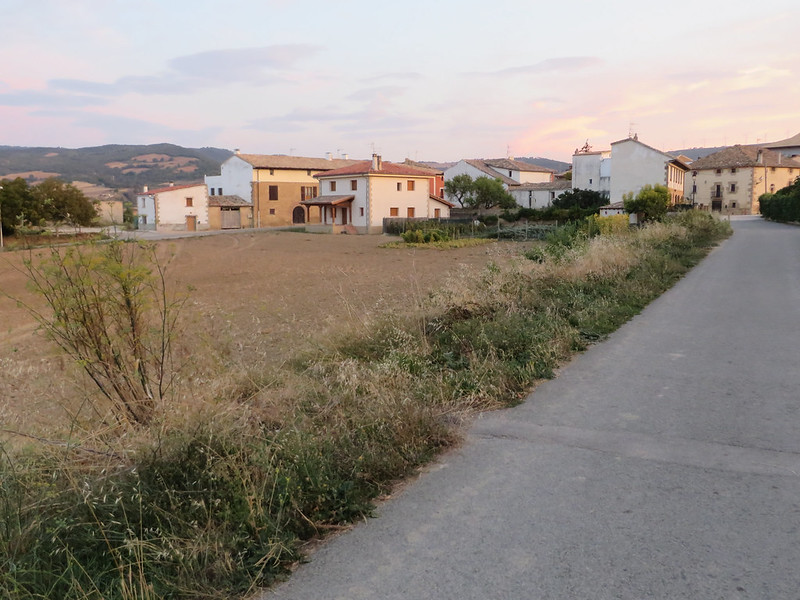 It was another sunny day promising to be as hot as the last ones, 32°. It’s nice to start off early to try and beat the heat, but I haven’t yet made it out before 8:00 a.m. like other pilgrims.

My palms get so sweaty when I grip my poles, but thank God for them. They take a lot of the pressure off my feet.

I caught up to Ariana, Monique and Brett who were detouring to see the Templar Church. They asked if I wanted to come, but I declined since it would have added a few extra kilometres to the day. My hips would have killed me plus I was starving.

Breakfast wasn’t an option at the last albergue and restaurants didn’t open until 9:30 a.m., so I stopped for breakfast at a bar in Puenta la Reina where I had the best cup of coffee ever, some freshly squeezed orange juice and a chocolate filled pastry – so good!

Puente la Reina, was a picturesque old town with a magnificent old bridge. The town is actually named after this bridge, Puente la Reina meaning “Bridge of the Queen”. 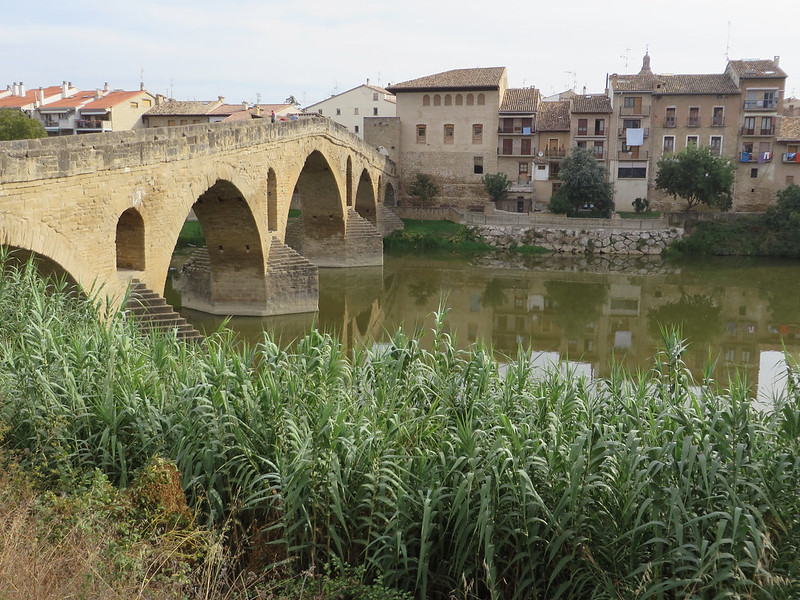 I found some more “Running of the Bulls” themed toys. 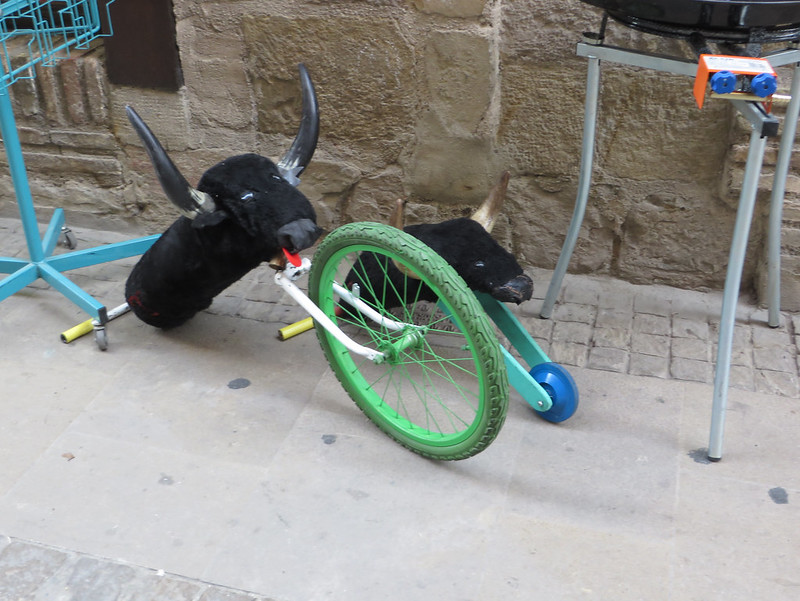 I caught up to Andrew again in Mañeru. He must have passed me at breakfast since he left the albergue later than I did. He was suffering with his blisters, poor guy! He decided to ditch the sneakers that caused them and put his hiking boots back on. However, the hiking boots had previously caused his Achilles tendon pain hence the reason he had bought the sneakers. He can’t seem to win. In a last ditch effort to fix things, he tried switching the insoles from his sneakers to the hiking boots to see if that would make a difference with both problems. 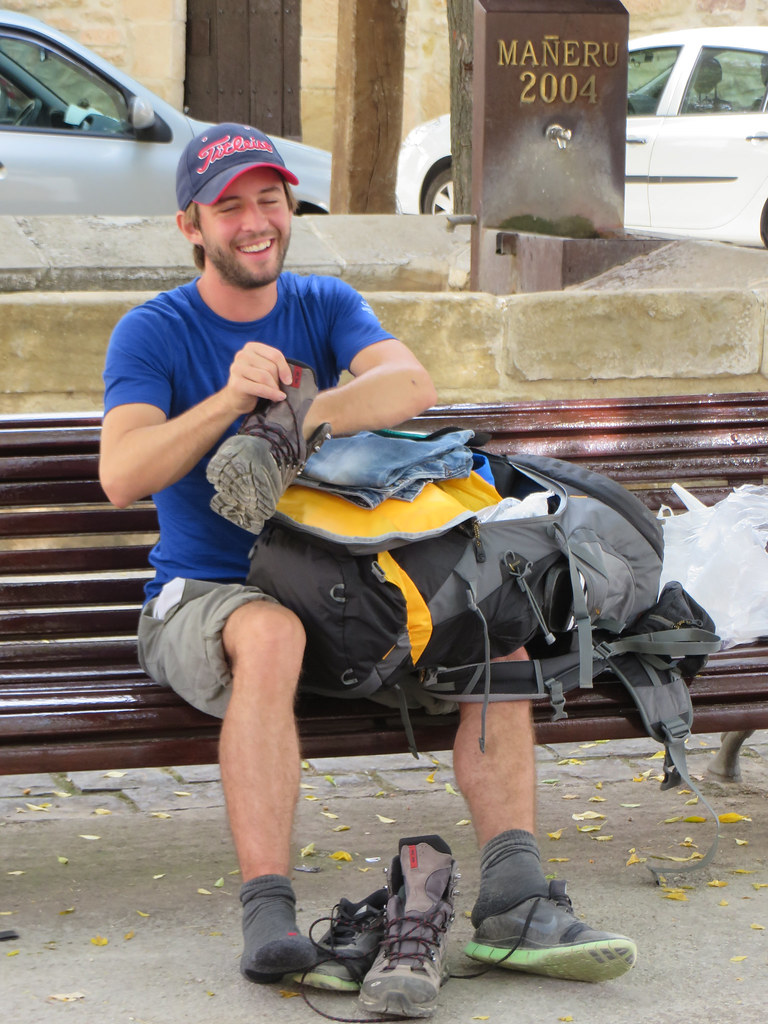 Bitter-sweet would be an appropriate way to describe the repercussions of my curiosity as Andrew and I taste-tested the fruits of the orchards and vineyards along the way. Until now I had never in my life seen an olive tree. 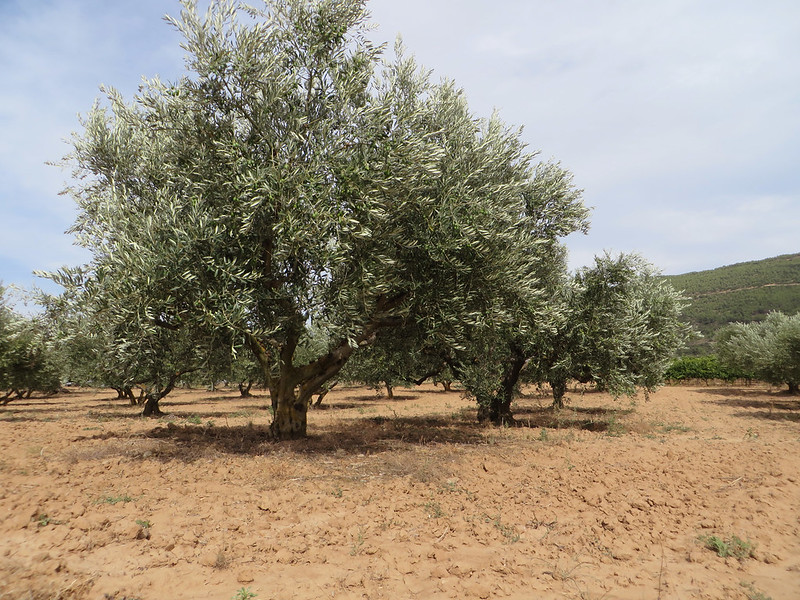 I remember reading about them years ago in a James Michener story that took place in the Galilea and since then I have always wondered what an uncured olive would taste like. My opportunity stretched out before me in acres of short, round, leafy trees full of plump green olives. This was my chance! 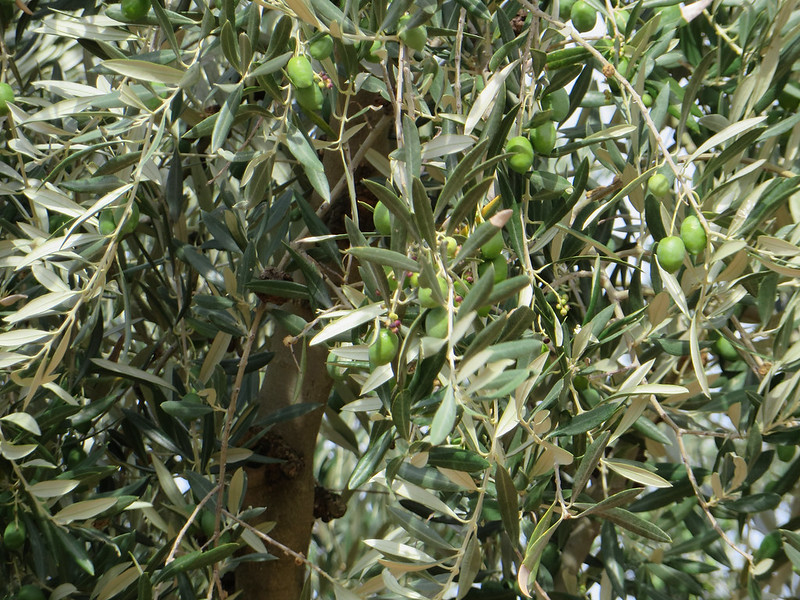 Well, take my word for it and don’t ever eat one. Needless to say I spent the next few minutes trying to spit the nasty taste out of my mouth. 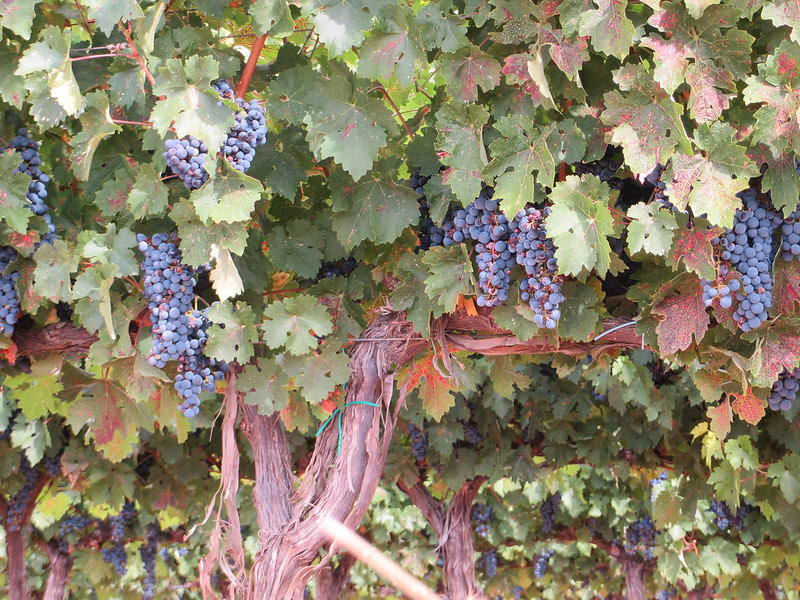 In an effort to clean the bitterness from my palate we raided a vineyard and picked a bunch of plump, sweet grapes. 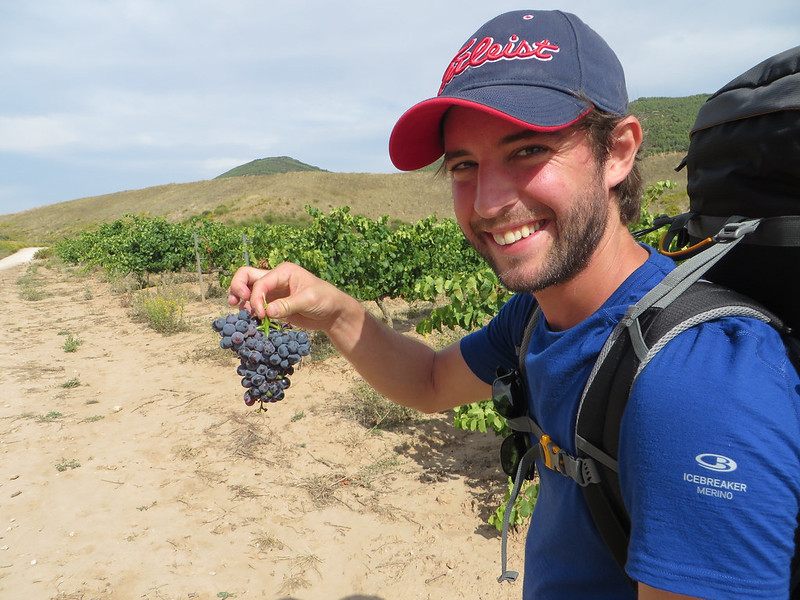 We took turns plucking the fruit from the stems as we walked and talked along the dusty dirt road until the bunch was just a mere skeleton.

The scallop symbols and yellow arrows led us into the hilltop village of Cirauqui and then through a passage where a table was set up with a stamp. 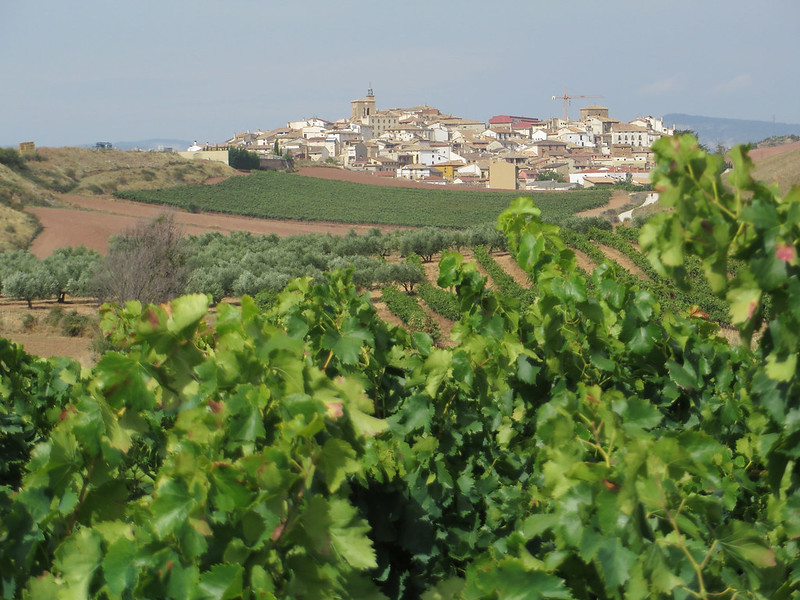 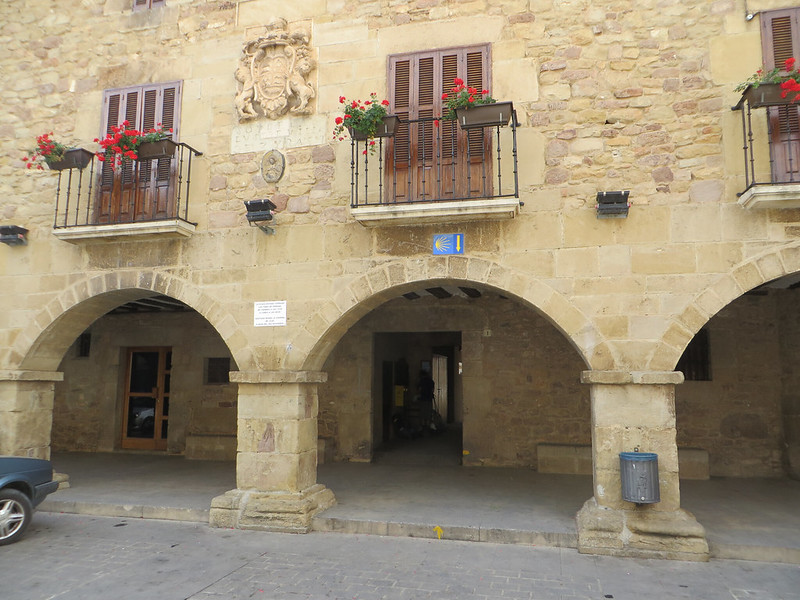 We added another stamp to our credencials. 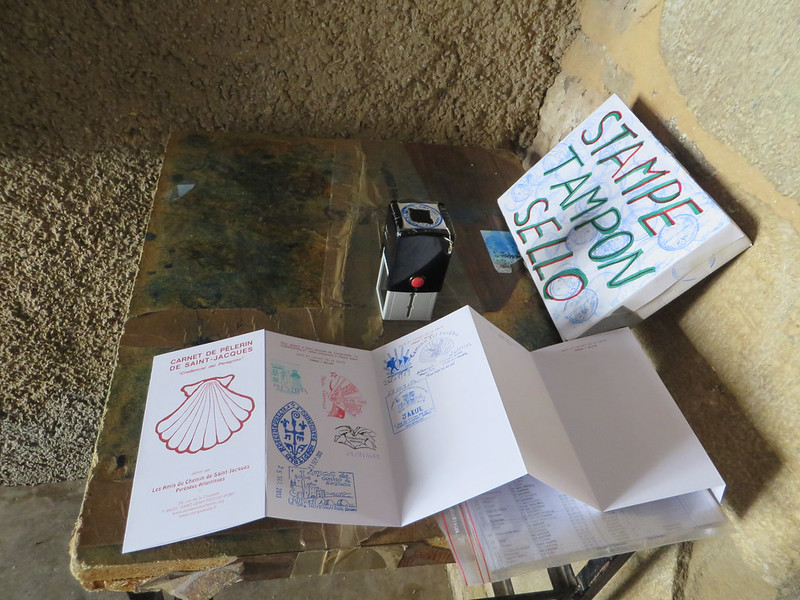 I might have thought it was a mirage if it wasn’t that Andrew saw it too. It was a pool – turquoise, fresh and sparkling. Our talk of raiding a vegetable garden and jumping into a pool seemed ages ago even though it was only the previous day, but there it was – our vision projected right there in front of us. I could only imagine how refreshing it would feel to swim a few lengths in it. 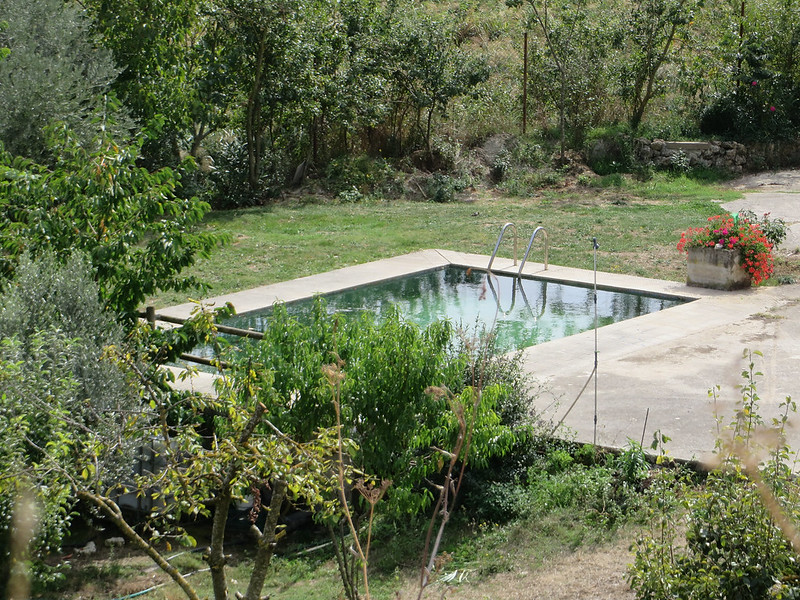 We stood there on the road looking down at it and then looked at each other smiling. The only thing separating us from the pool was a grassy bank and a small yard with a few fruit trees.

The house was slightly visible and a dog was barking, although we couldn’t see it. Andrew was skeptical of the idea of trespassing. What if the dog attacked us or what if there was someone sitting down there out of sight? Maybe with a gun we joked. Andrew suggested that I go down there and jump in while he watched from the road, but after contemplating the idea for a few moments and unsuccessfully convincing Andrew to join me, I gave up and we kept walking. At one point I stopped and pleaded, “Come on, let’s do it! We can turn around. When will this opportunity ever come up again?” It did no good. I guess I was chicken too.

We were hungry when we reached Lorca. Our grape appies and, well, the attempt at eating the uncured olive, were the last things we snacked on. We stopped at a bar and ordered a plate of properly cured olives with our lunches. 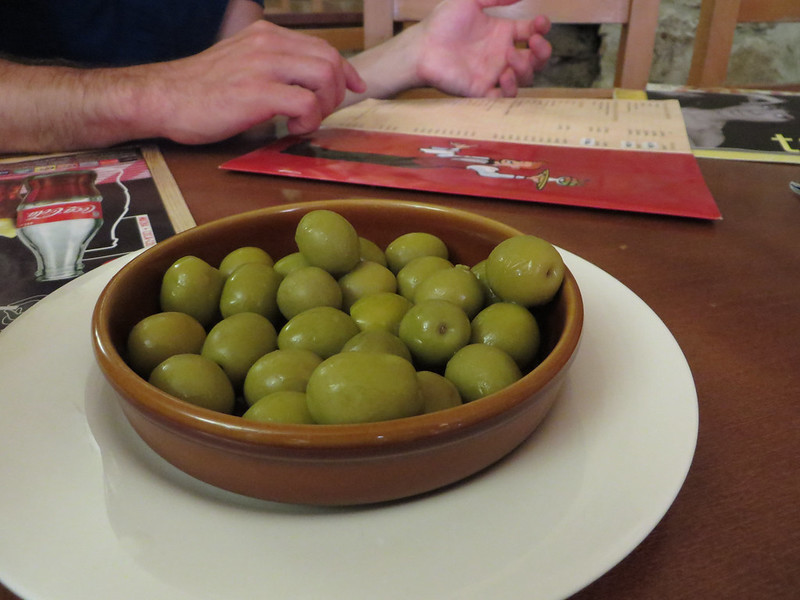 We freed our aching feet from our boots and Andrew showed me his blisters. Nasty! 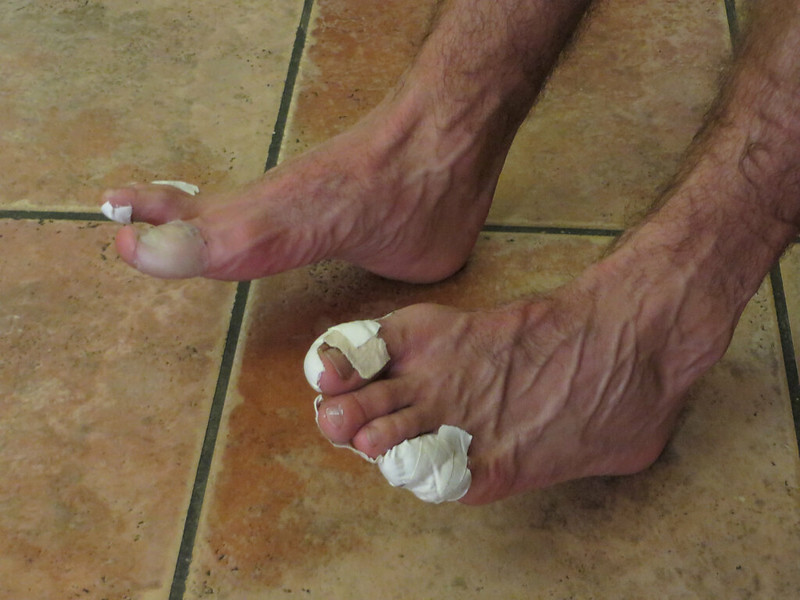 He had done what he could to protect his blisters from getting worse by adding some Compeed and tape, but I’m not sure it’s working.

We made it to Villatuerta that day. A man who was pruning his rose hedge cut us two roses. 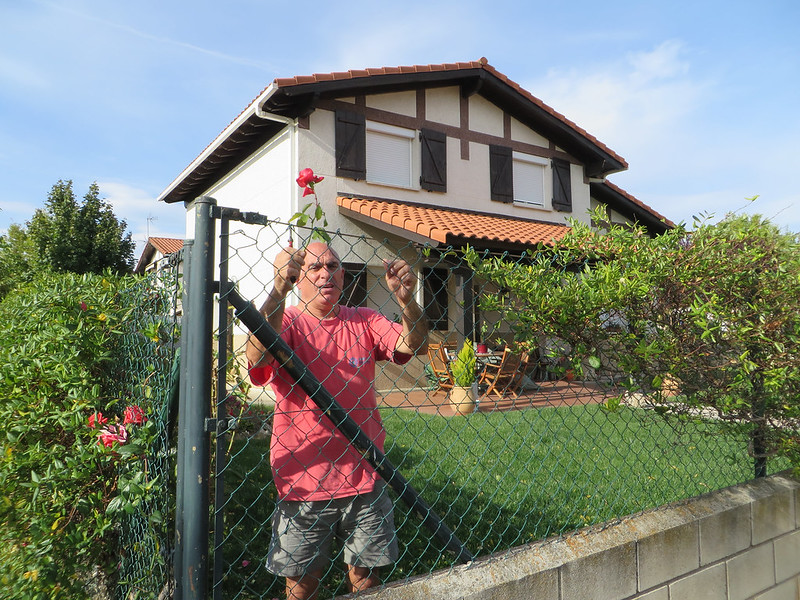 One was supposed to be for Andrew, but for some reason he wouldn’t walk with it.

Three Spanish girls were playing outside a farmacia, so I gave the roses to them. They would be able to enjoy them for longer than I could. I also gave them some Canadian flag pins that I had stashed in my pack. 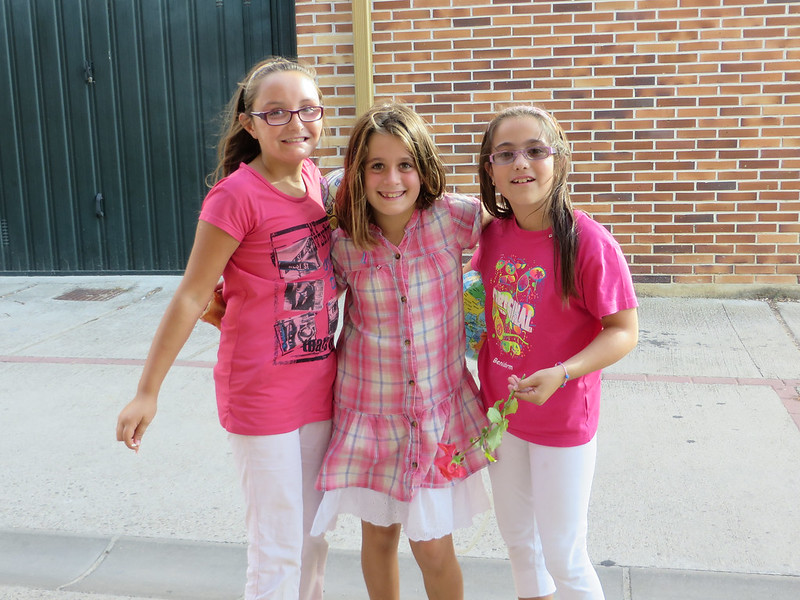 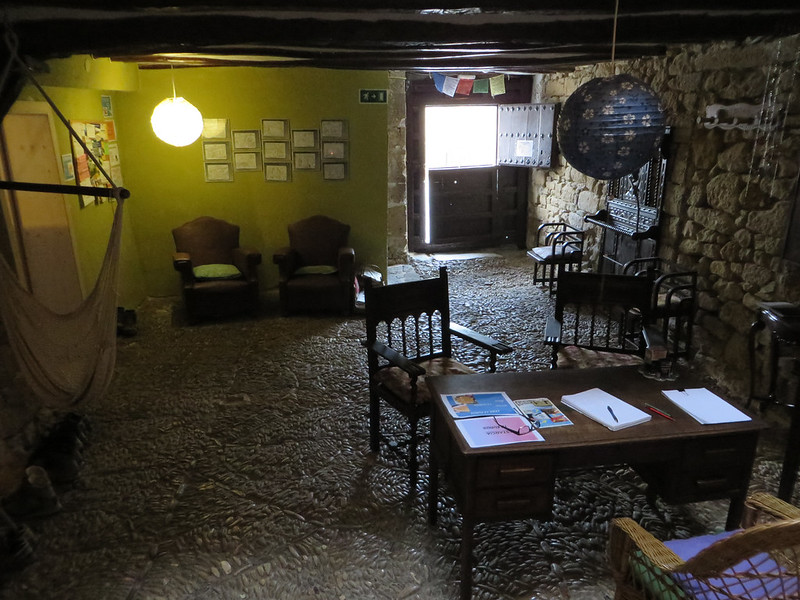 There were only six of us. Yay! That meant hopefully a more restful, snoreless night although it only takes one to ruin a good night’s sleep.

This albergue, along with its quaint style, was extremely clean. Everything was spotless – the bathroom, dorms, kitchen, dining area and even the very rundown looking courtyard below the patio. 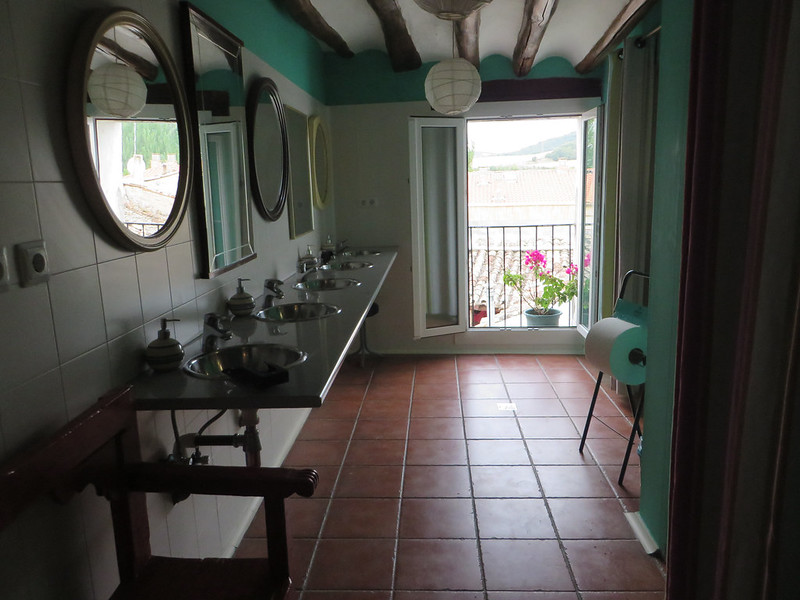 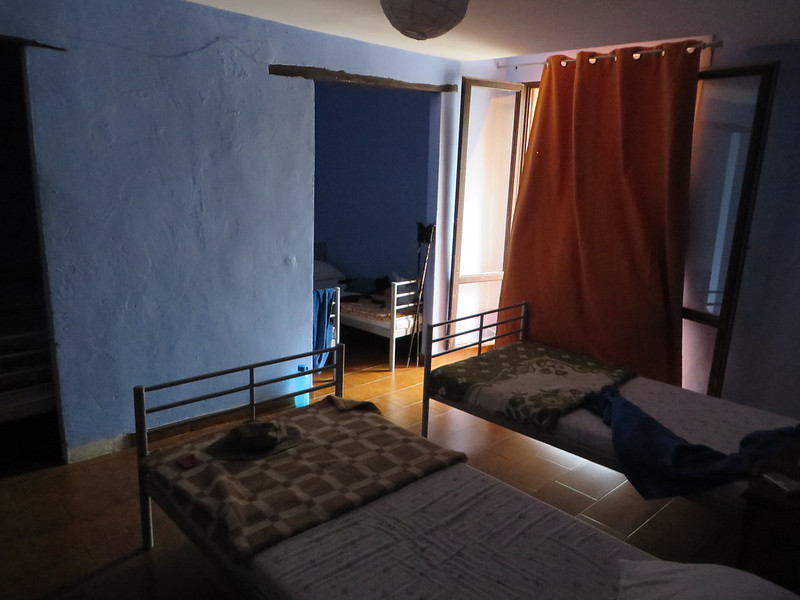 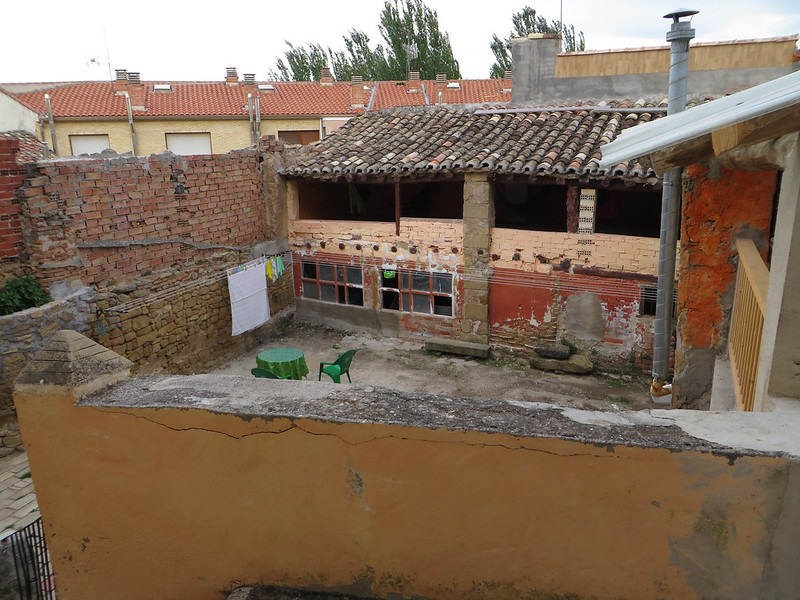 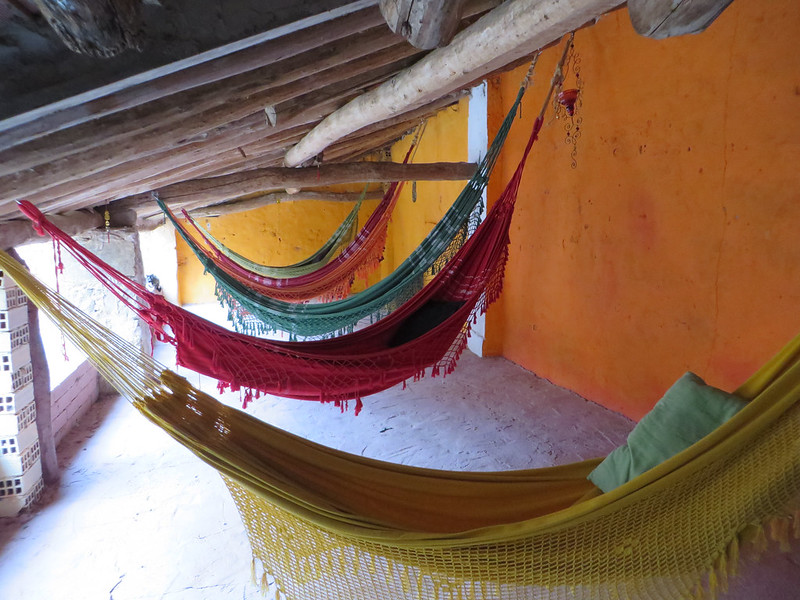 The hospitaleros were busily working cutting vegetables in the kitchen and cleaning. 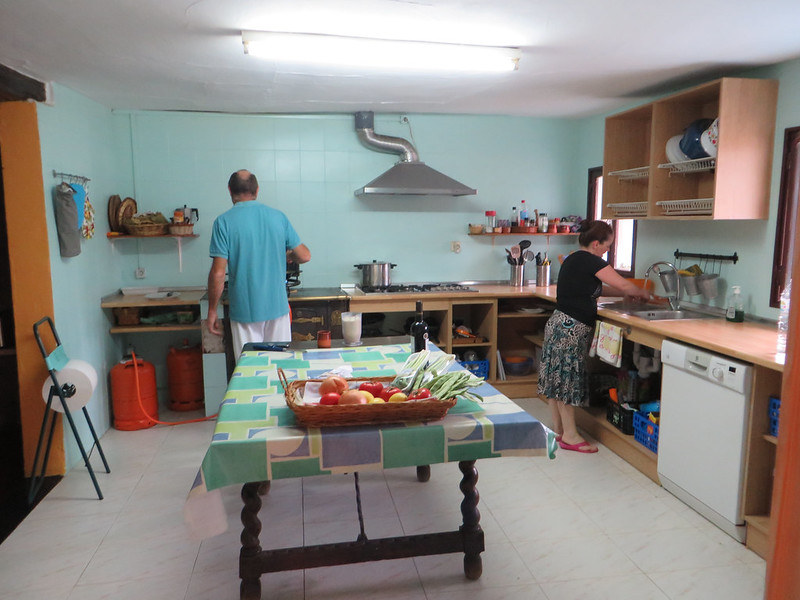 Dinner was fabulous – a delicious vegetarian paella including prunes which added a touch of sweetness to the savory flavour. Along with a fresh salad we also snacked on olives, pickles and some tasty hot peppers. 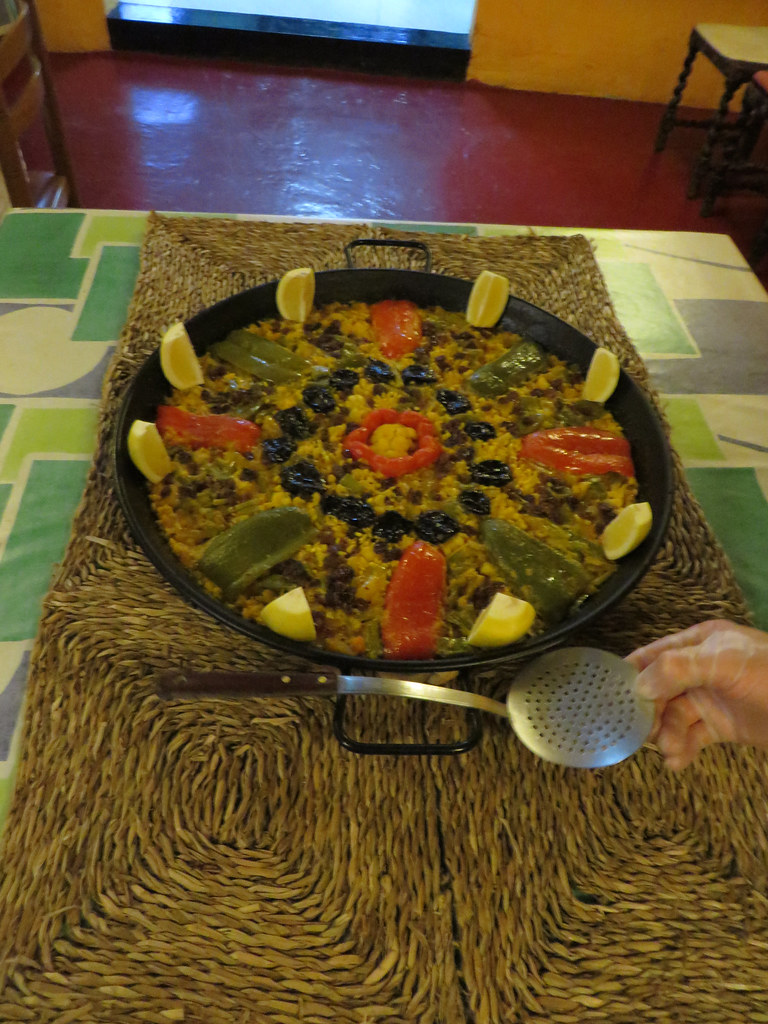 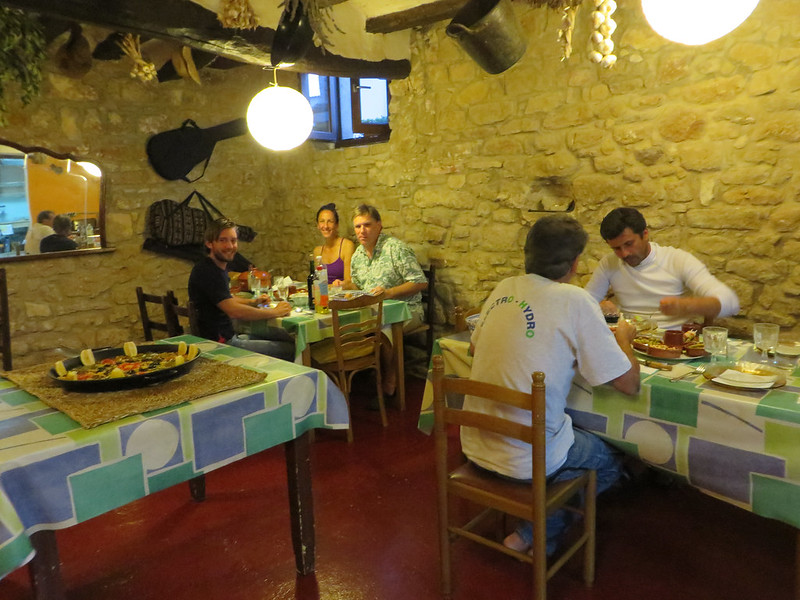 This was kind of funny. The guidebook had said La Casa Magica had a masseuse and a healer, so when we were on the outskirts of town trying to decide on a place to stay I said to Andrew that we should stay at this one so he could get his feet healed and I could get a massage for my aching hips.

As it turned out, yes, there was a masseuse and a healer, but it wasn’t the hospitaleros that the treatment came from. It was one of the pilgrims, Thomas from California, who just happened to be an MD specializing in massage therapy. His girlfriend, Christina from the Cayman Islands, was his apprentice. What are the chances?

Andrew took advantage of the opportunity and had some ‘minor surgery’ done on his feet, or more like his blisters cut and drained. 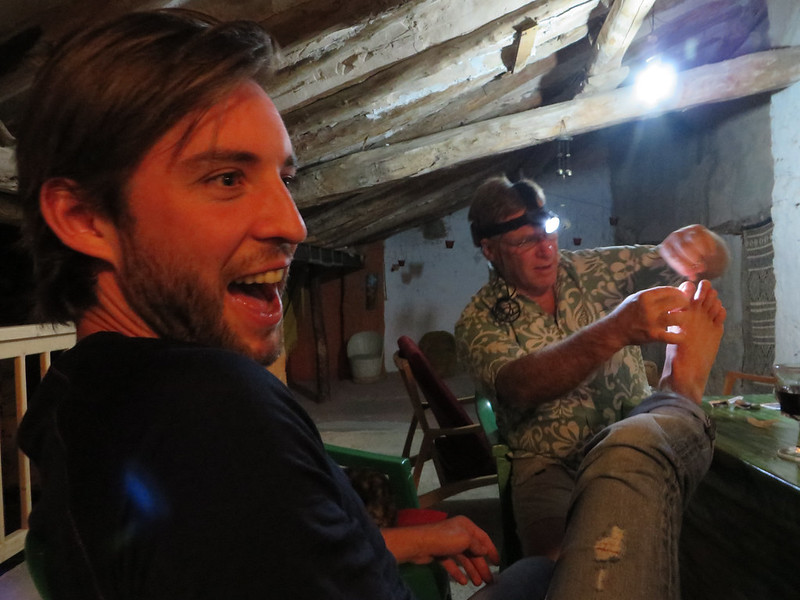 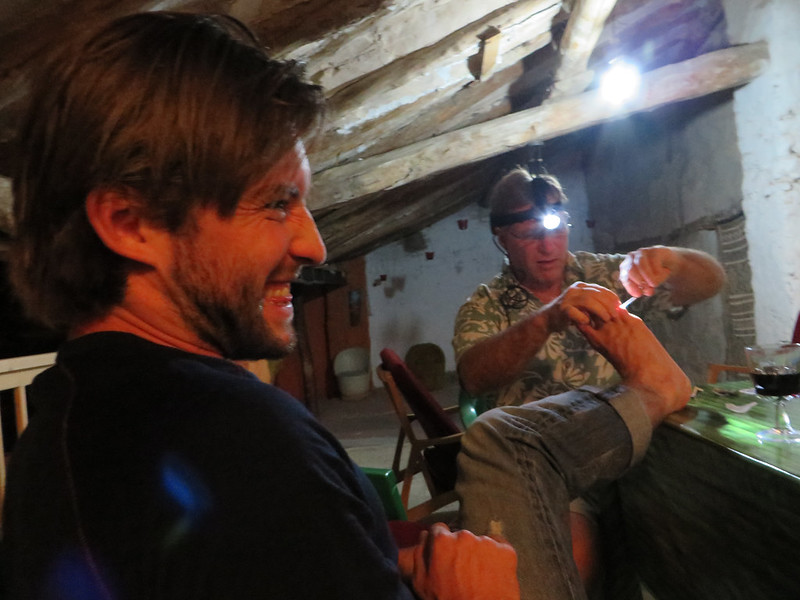 Thomas offered to do chiropractic treatment on my knee, but again, what if it went sideways? There was no way was I going to take a chance on that and besides, my knee has been good so far. If it ain’t broke don’t fix it, right? Unfortunately, I missed the opportunity for the massage on my aching hips – the offer of the chiropractic treatment scared me off.

Since this albergue also had laundry machines I gathered up our dirty clothes and started a load in the washer which took a painfully long time to complete its cycle. You definitely have to take advantage of machines when the opportunity arises since they are not available at every albergue.

Andrew sat back with his blistery feet soaking in a pail of cold, salt water while I dealt with the laundry. 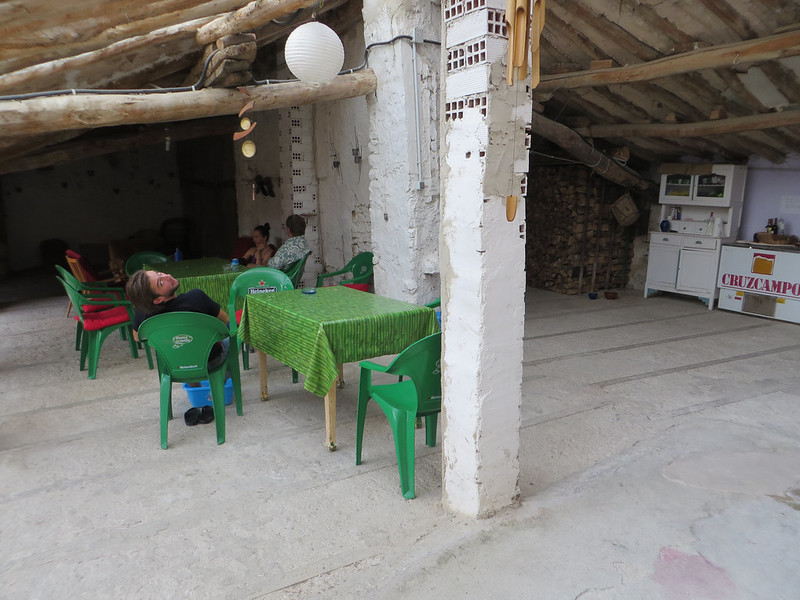 He seemed to be quite happy to have me doing his dirty work and mentioned something along the lines that this is great and you might be worth keeping around.

For the remainder of the evening we sat and talked with Thomas and Christina as well as Frank and another Andrew, both from France, and finished off a couple bottles of wine. Then I had the best sleep ever! No snoring!