The band had the crowd hopping to the beat, dancing and screaming. It was nuts! I have never seen a bar this packed – standing room only. No fire code here! You couldn’t sit unless you were part of the band. 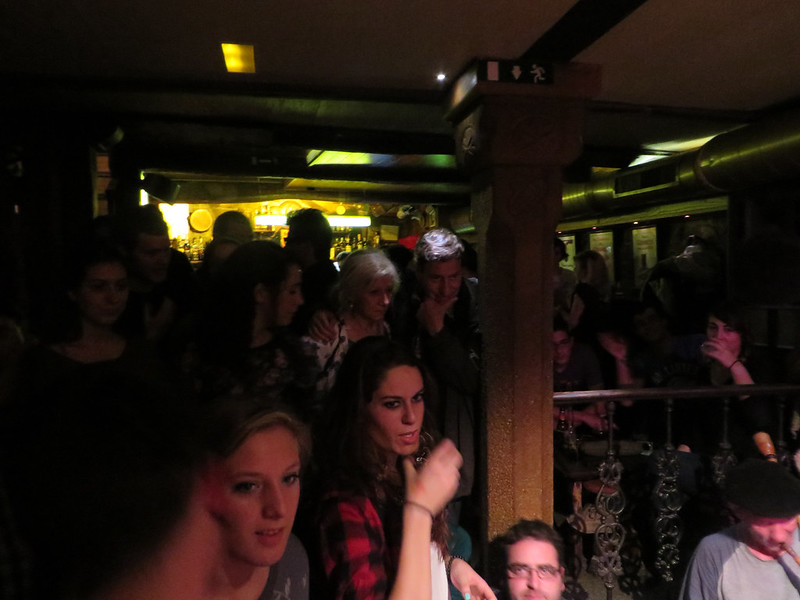 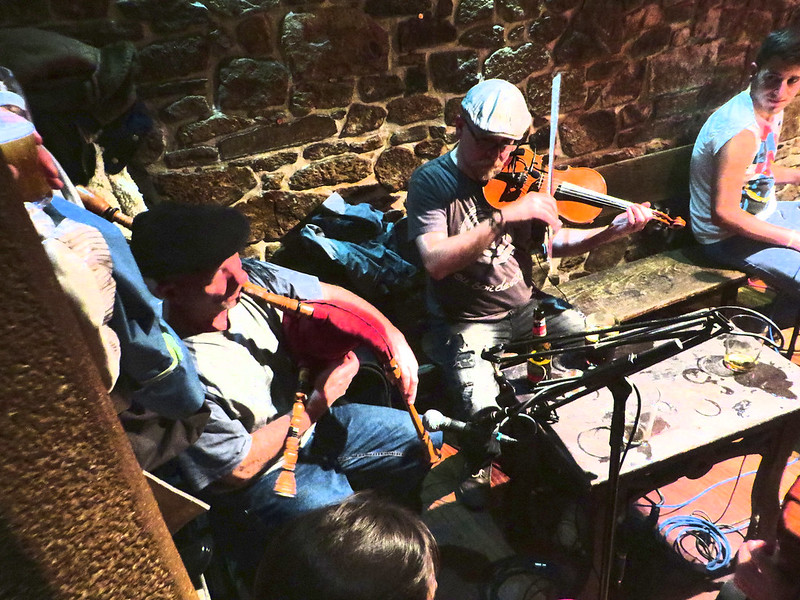 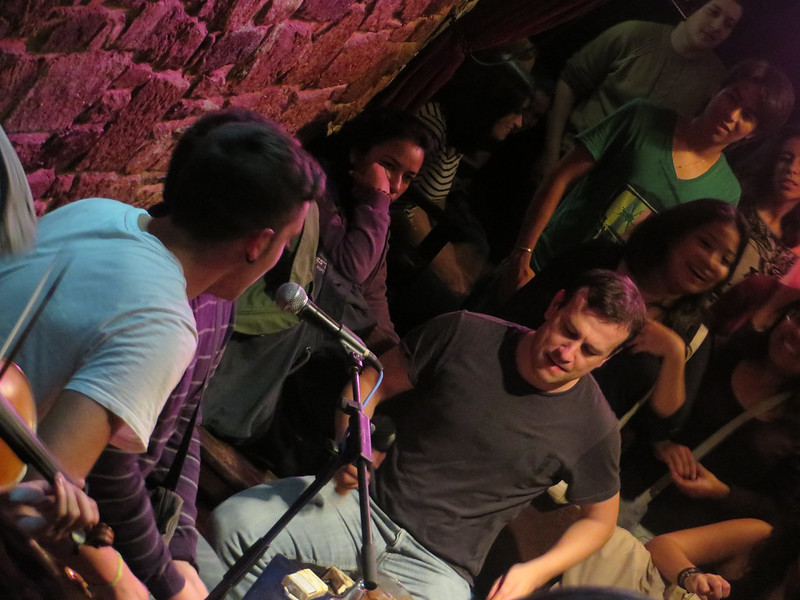 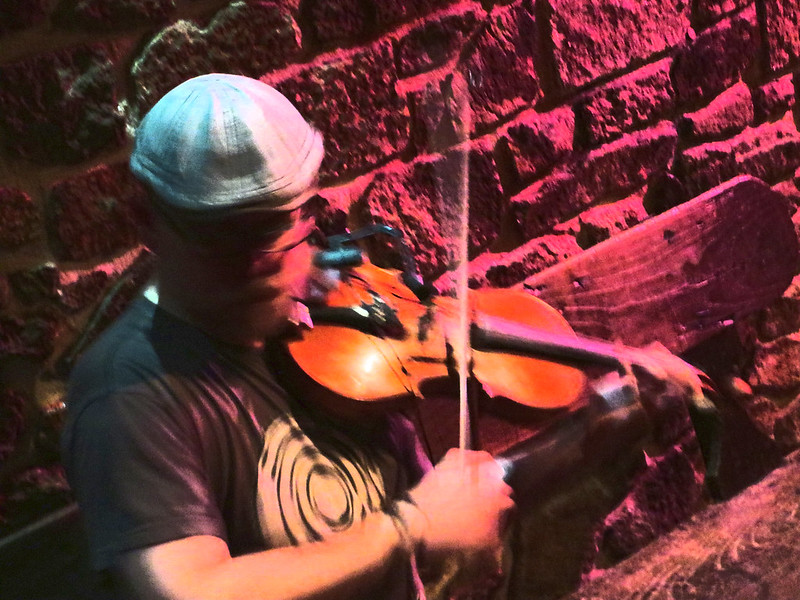 Everyone was packed together like sardines, pushing against each other vying for a better view of this Spanish-Celtic nine-piece ensemble.

The band played with energy and interacted with the crowd. The communication between its members and the display of talent was phenomenal. The drummer stood on his chair pounding his drum and clashing his cymbals. 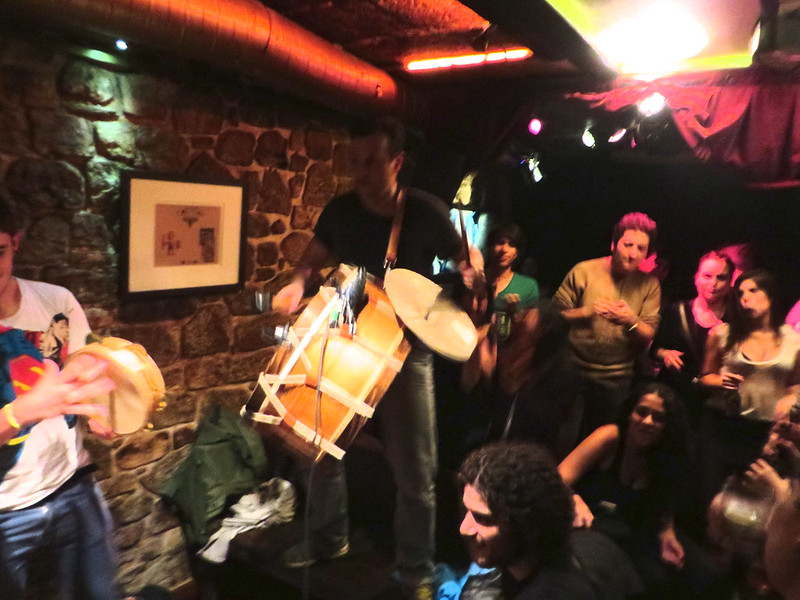 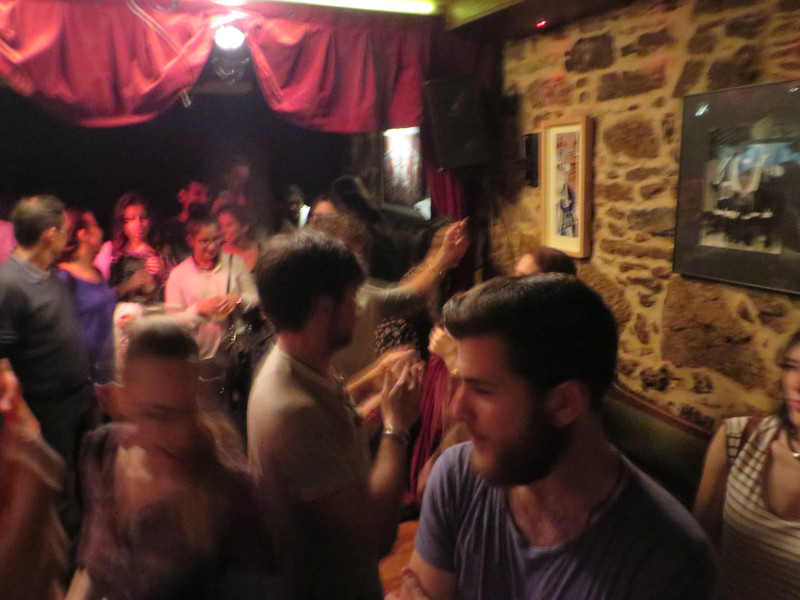 The beer went down fast. It was hot and the crowd hopped to the fast and steady tempo of the drumbeat accompanied by an accordion, some bagpipes, a fiddle, a couple of guitars and a tambourine. The lead singer’s vocals carried a hint of Morocco – a reminder that Africa was not so far to the south. 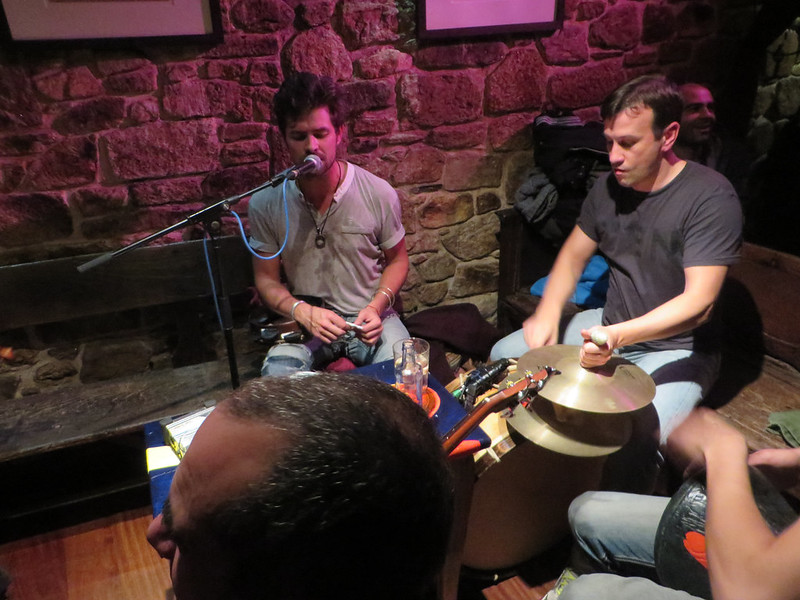 The tempo changed and the crowd chanted lower and softer along with the band. We crouched lower and lower too until the tempo changed again bringing us up. We chanted louder and our voices soared higher while our crouched frames extended steadily upwards, hands reaching for the roof, until we were all jumping and breaking out into loud roaring cheers. I kept yelling, “This is so amazing!” throughout night. It’s no wonder I have no voice now! 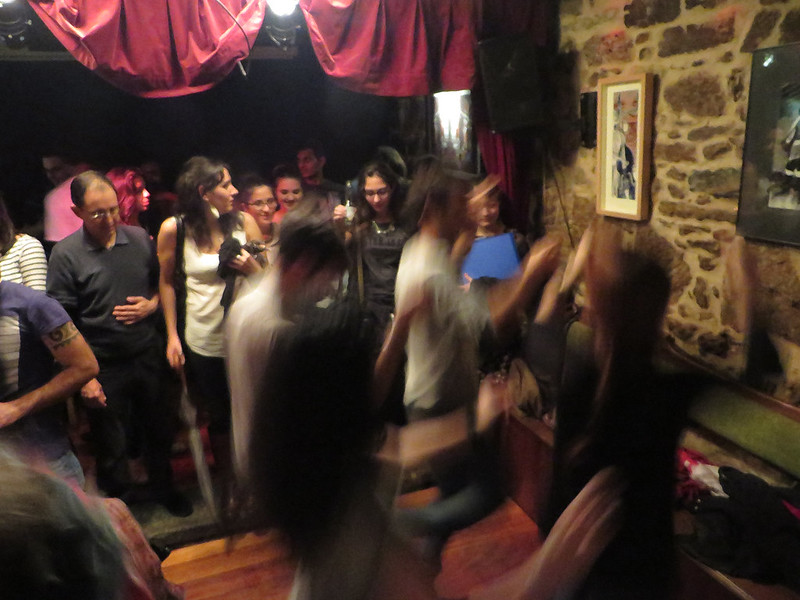 Earlier in the evening I had met Shelby, from Austin, Texas while we were both getting ready for the night in the hostel washroom. We struck up a conversation and made a connection instantly. 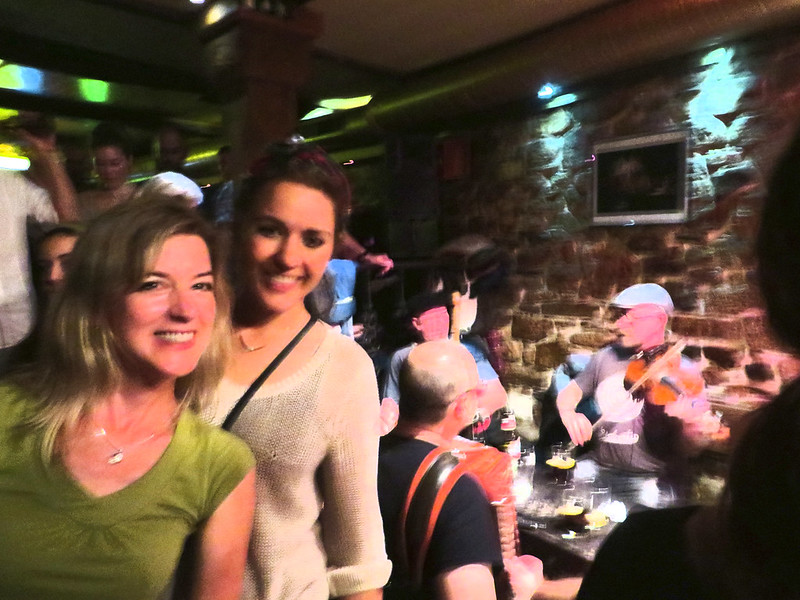 She’s a well-traveled young woman, 22 years old, who has aspirations to teach English as a second language in South America. Admirable and brave! I can tell she’s a strong woman and can handle herself well. She had intended to walk the Camino, but fell ill and could not continue. She’s better now, but with her other travel plans she will have to walk the Camino another time. She came to Santiago anyways and good thing because we had the time of our lives last night!

Shelby said that a couple of live bands were playing just around the corner from the hostel, so together we ventured out for a night of celebration. We sat at a bar with some wine and talked for a while first. Shelby typed some Spanish translations she thought I could use onto my iPhone’s notepad. I needed to ask the bartender for some water so I recited, “Quiero un vaso de agua, por favor”. He brought me a glass of water.

Next, we watched a Spanish rock band perform “Highway to Hell” – simply amazing! The lead singer wore a hat just like Brian Johnson’s and danced around with the energy of Angus Young.

Then we found the underground bar with the high energy nine-piece Spanish-Celtic band. Quite incredible! 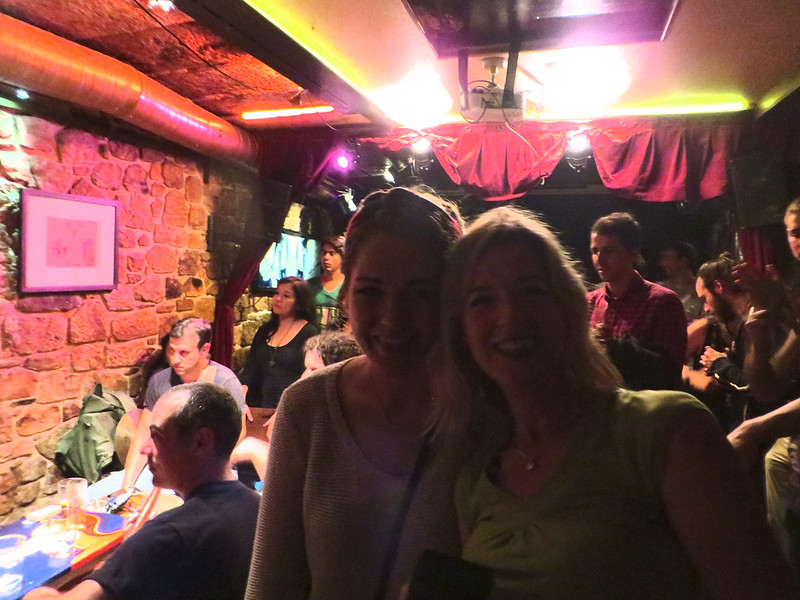 During a break in the set Shelby needed to get some money from the bank machine, so we left the bar with drinks in hand. We even walked passed a police car with its lights on, but the officer didn’t give us one look. I still think it’s so funny that you can wander the streets with open alcohol here and that children can hang out in bars. At the first bar we visited, a toddler-aged girl stood on top of the bar counter. I think she belonged to the bartender. It’s just so different here. 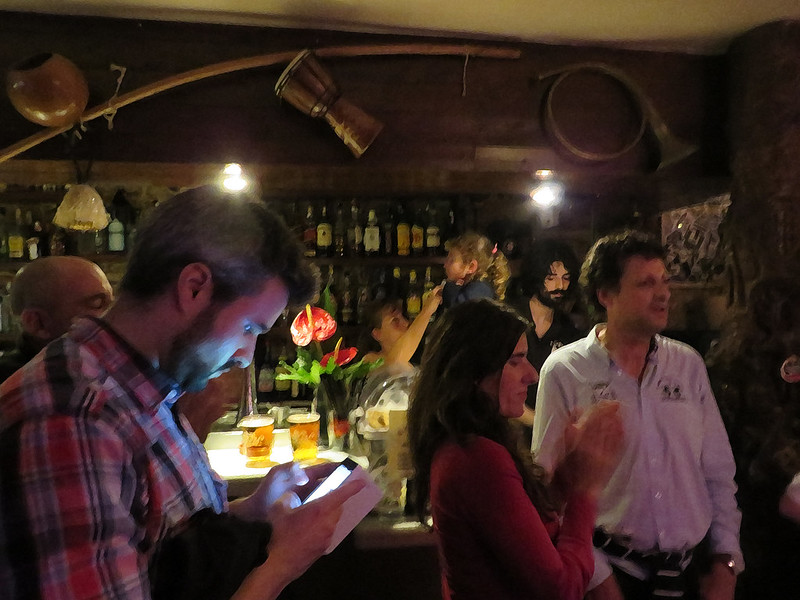 The last bar we ventured into was a revolutionary style bar. 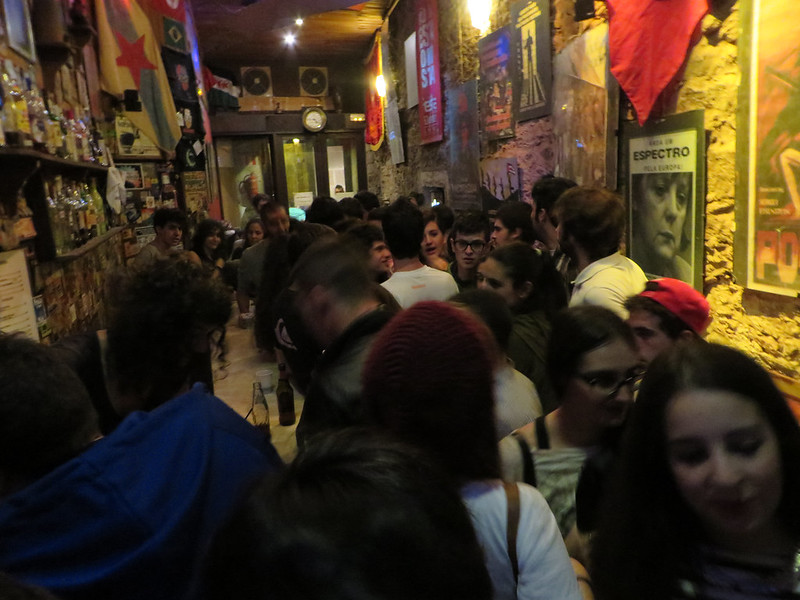 Political posters decorated the walls and passionate young people danced and sang with hands in the air. During my days spent walking I discovered there is some political unrest here in Spain. Signs of it were spray painted on the concrete walls of tunnels, “Freedom for Basque Country”. Certain regions wish to be independent – the Galician, Basque and Catalonian. Regardless of the political turmoil, the mood of the party-goers was upbeat and happy and it wasn’t long before the dance floor became a mosh pit. Trying to stay afloat was a challenge, but Shelby and I managed to ride it out happily with drinks in hand.

It was a late night, but it was so much fun. I haven’t partied like that in ages! It’s a crazy accomplishment to have made it this far, 800 kilometers. Not only that, but to have overcome all of the challenges along the way. It’s only fitting to celebrate like crazy.

Day 14 AM: The Children From Madrid