The fever broke at some point in the night, but before it did I kept waking. The back of my eyes felt hot and my skin felt sensitive. Strange dreams and images appeared to my mind throughout the night. Instead of yellow arrows, I had to follow crosses. I remember feeling worried in my dream that I wasn’t going to make it to Santiago and woke up feeling scared.

It was dark in the room and I could hear the rain outside – and the wind. That’s what frightened me the most. It was a deep foreboding howl, mournful and depressing like someone moaning in a lot of emotional pain. The agonizing sound made me feel nervous about my walk this morning, but when I stepped out into the daylight with my pack and poles I didn’t feel scared anymore. There was no howling wind or rain, there were bright patches in the overcast sky and the air smelled fresh.

Now that I’m in the Galician region known for its rain I need to be prepared. 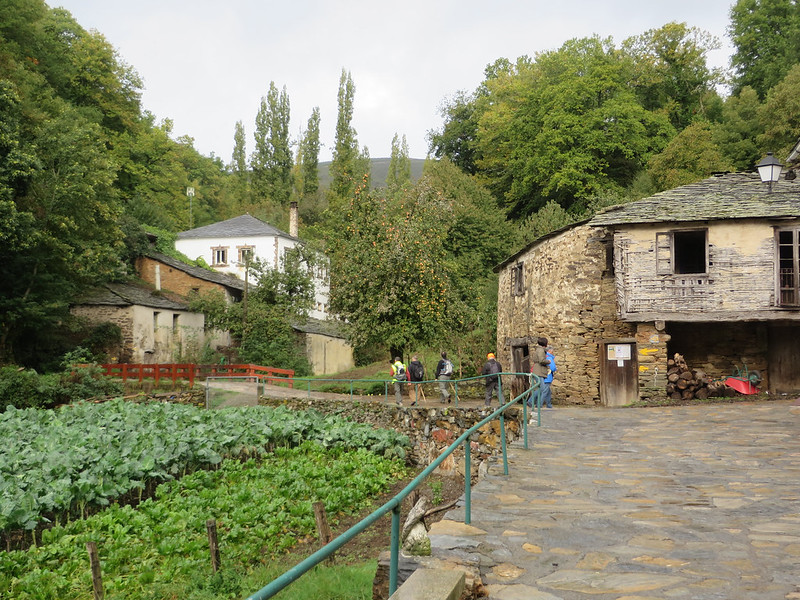 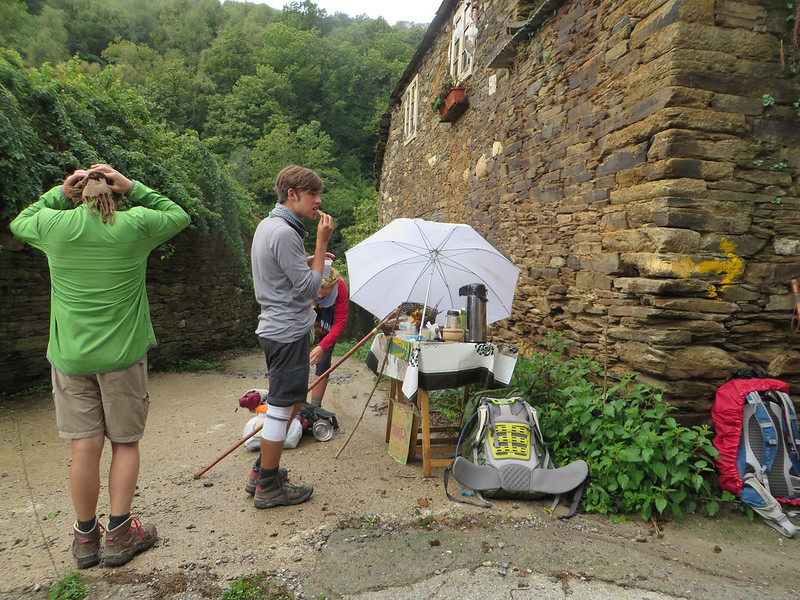 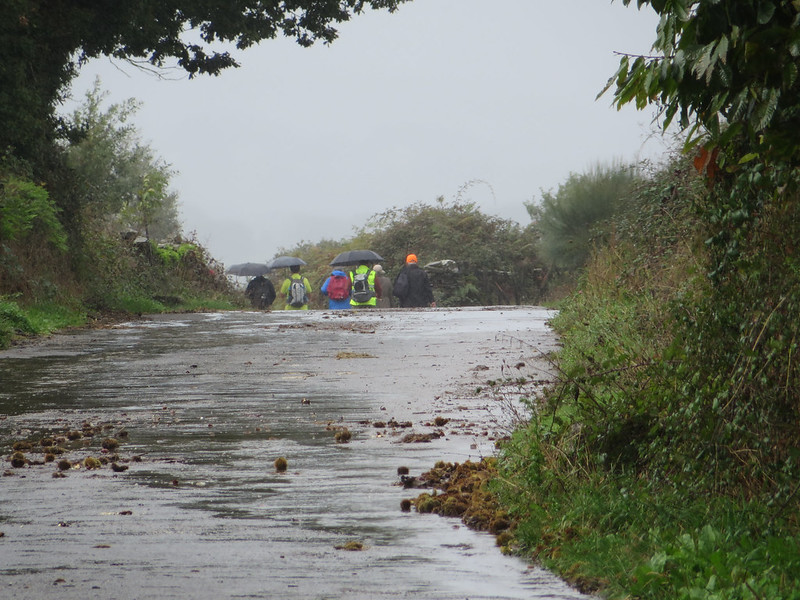 My plan was to power through to the next town since I started feeling pretty good half way through the day, but as I trudged up a long hill on the outskirts of Sarria a nagging thought kept telling me I should turn around and stock up on euros. Some of the small villages don’t have bank machines and I am not sure what’s in store for the next few days, whether another big town or a string of small villages.

I turned around. It was raining and I had to backtrack quite a ways. It took me a while to find a bank machine, but once I did the sun was shining and I bumped into Sue from New Zealand. I was so happy! She is the one who nearly lulled me to sleep with her beautiful singing on my down day, remember? She gave me directions to the albergue she is staying at tonight. She said there will be sing-along around a fireplace later on. 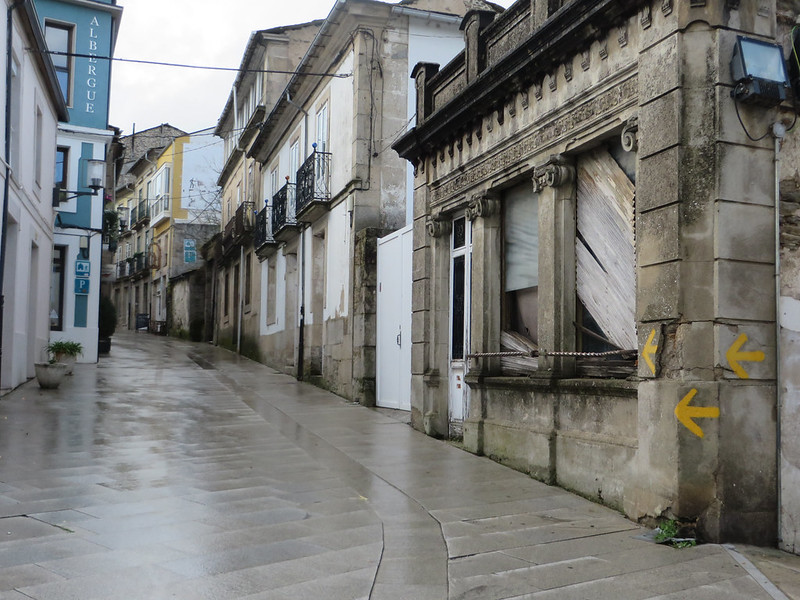 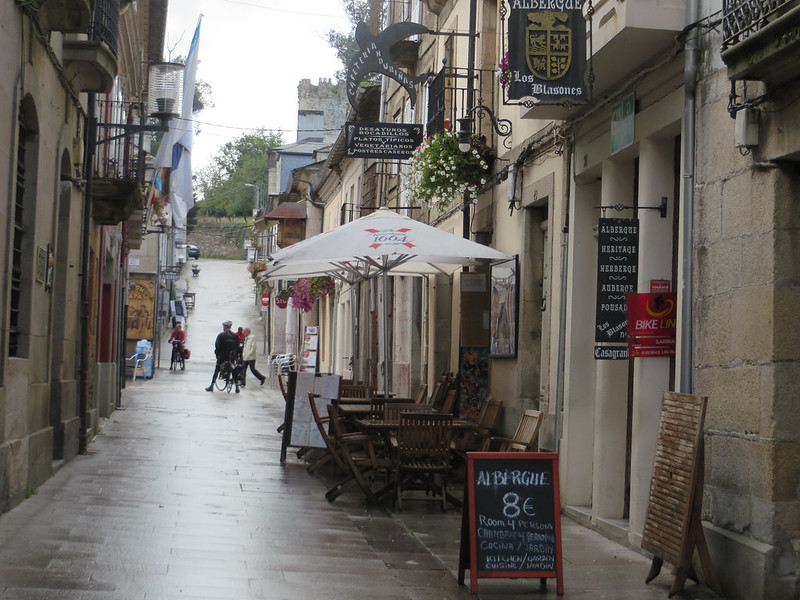 After squaring up with the albergue’s hospitalera I got the grand tour by her four year-old’ish daughter. She took me by the hand and led me to the kitchen, then out the door and into the courtyard.

The little girl stood looking up at me with her big brown eyes and pointed at the outdoor laundry machines. Very firmly she issued instructions in fluent toddler Spanish. I responded with an animated “Si, gracias!” Then, still leading me by the hand, she showed me an outdoor sitting area and a stone room with a fireplace. Her assertiveness was amusing to me and her mother who watched and smiled from the kitchen door. She was a hostess in the making!

The little hostess and her mother led me to the dorm where I would sleep. It was for female pilgrims only tonight – a nice change. Sue and her two Kiwi companions plus two German girls were bunked here too. There was also a small private bathroom with a shower. Nice! I unpacked my sleeping bag liner, laid it on my bunk and then pulled out my bag of laundry. After receiving specific instructions from the little Spanish girl I shouldn’t have any problems with the machine here. 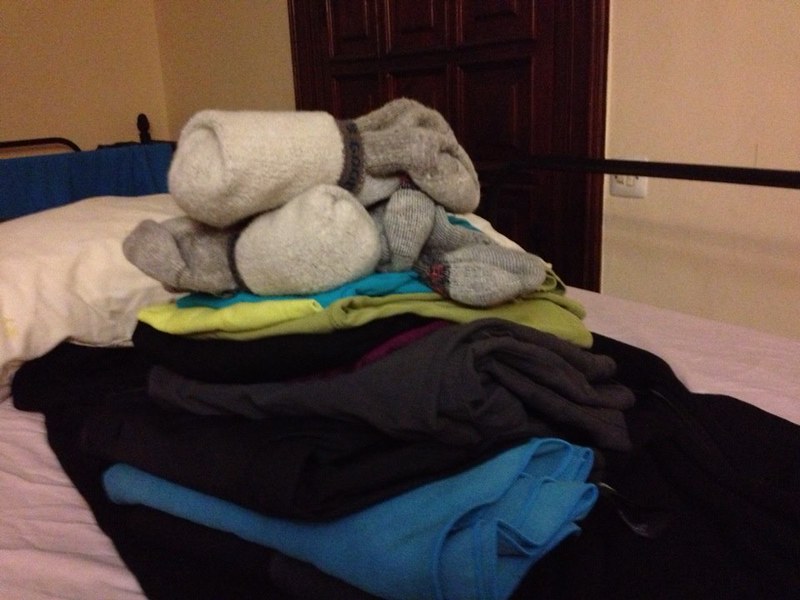 I dined at a small Italian restaurant that Sue had recommended. It had a comfortable ambiance. The only thing I regretted was ordering the pizza. It was just more bread and sparse in the way of toppings. The tea was heavenly though – regular tea with milk and sugar. Now that was luxury!

It’s interesting how a journey like this makes you appreciate not only the little things like tea, clean laundry, a bath tub and a comfy bed, but also the friends and family you can normally call up for a visit. It’s so easy to lose people out here! Each pilgrim has a unique journey including a predetermined time to get to Santiago, however therein lies the challenge. The mind pushes forward wanting so desperately to reach that destination, but the body sometimes resists and puts an unwanted block or curve in your path.

The Camino is like life in many ways. We all have unique journeys in this world, not one is the same, and each one of us will eventually reach the end. We want so badly to hurry up and find the happiness that lies just around the next bend, always searching in things, people and places for the answers, yet sometimes our bodies don’t give us the time we need to find the contentment we seek. But maybe the answer was always right there – in the here and now – the journey.

Update: After the Fireplace Sing-Along:

A young man was strumming his guitar and singing when I quietly let myself into the stone room with the fireplace. Orange flames danced on a pile of logs in the open pit. 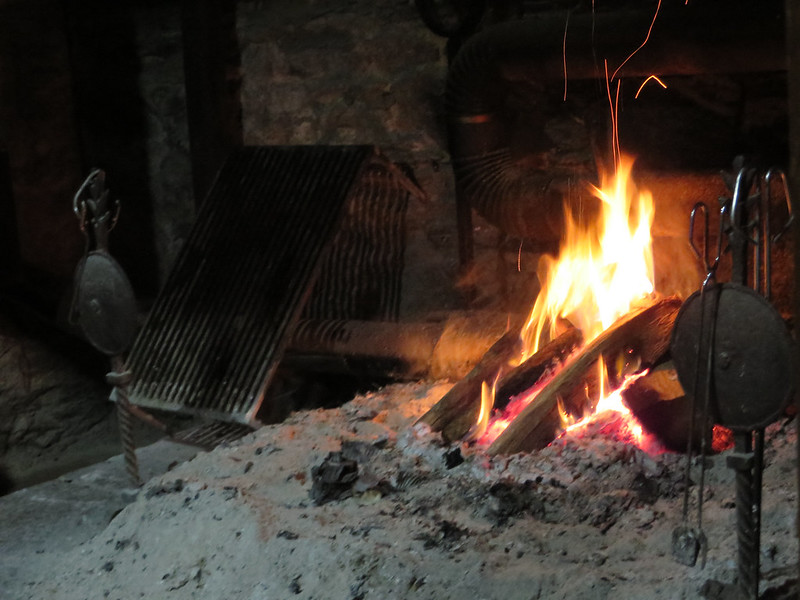 The orange light flickered on pilgrims’ faces as they sat silently listening to his clear, deep voice deliver the song Hallelujah. 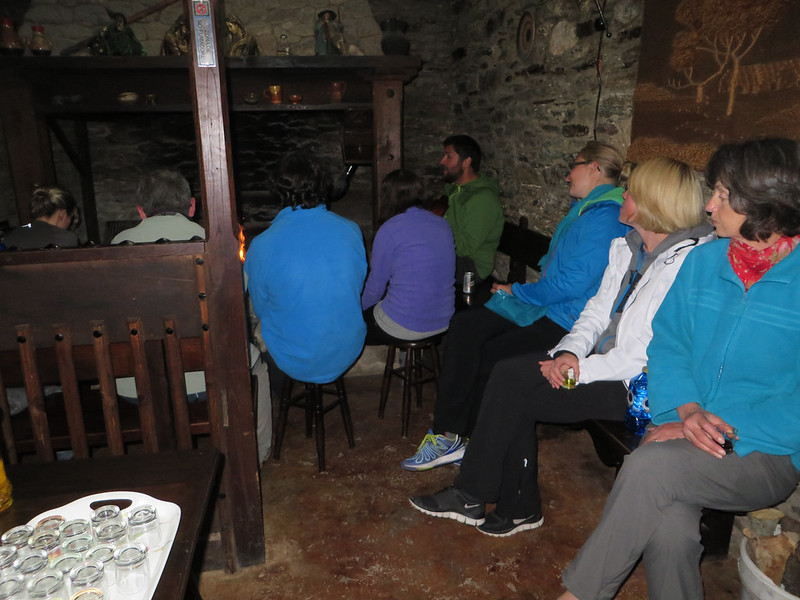 His name was Greg from Toronto. What a talent! I got goosebumps when Sue joined in and harmonized with him. The music was so beautiful and soothing. My shoulders relaxed. Greg even recited a song he knew in Spanish. 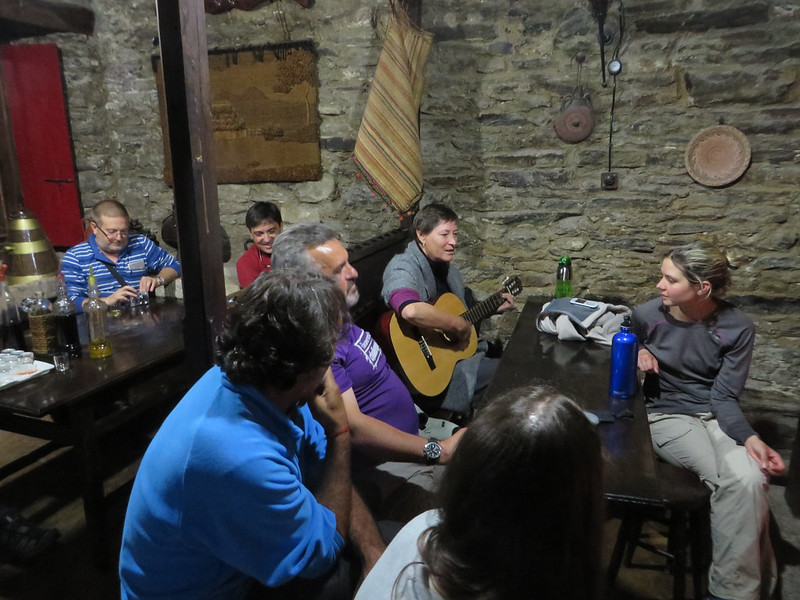 Pilgrims from different countries including two from Spain sang along as Sue played “Let It Be” and “Imagine” by the Beatles, as well as some Eagles and Elvis gospel. We changed some of the lyrics of “Stand by Me” to “On the Camino Walk by Me.”

Small glasses of Orujo were passed around for sipping – very strong and very warming, but don’t worry, I went easy on it and had just one tiny glass. I don’t want to push my luck! 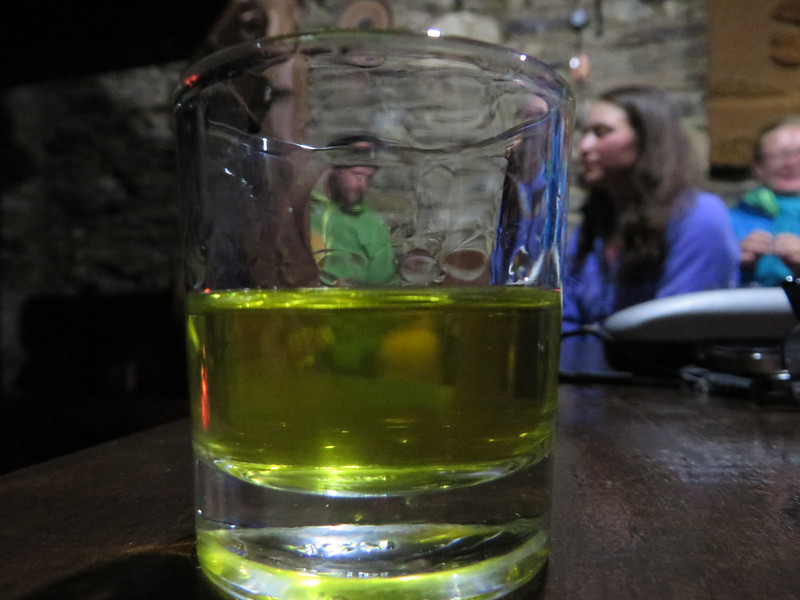 Andrew made it to Santiago and is now on his way to Finisterre! If all goes well, I hope to meet up with him again in Santiago on the 24th before he fly’s back to Germany. I want that big hug he promised me. He’s the Camino buddy I definitely miss the most.