Today, the second half of the 61 kilometres I walked since I last posted, was a hard day. I’m beat! It involved 1200 meters of accumulated elevation gain. 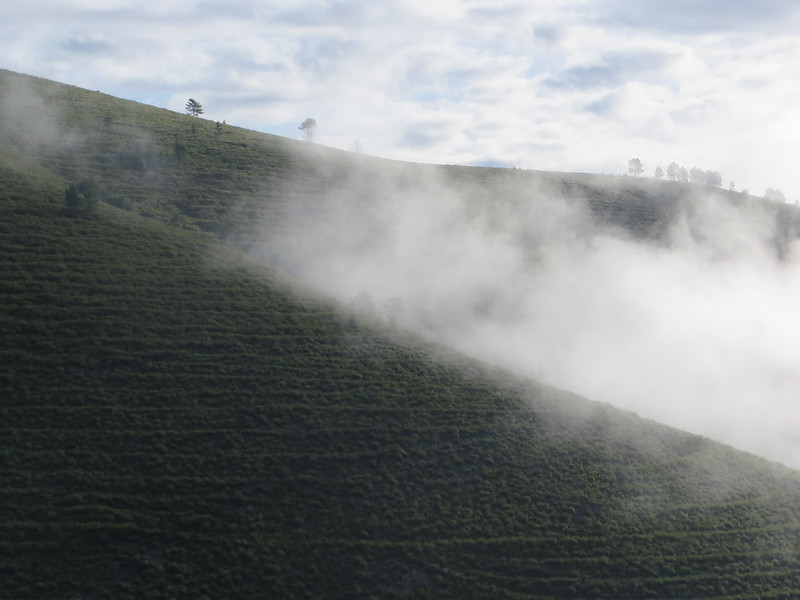 The scattered clouds of mist, as I climbed higher into the mountains from Villafranca del Bierzo, floated aimlessly around the landscape like ghosts, sometimes engulfing me and other pilgrims as we walked. 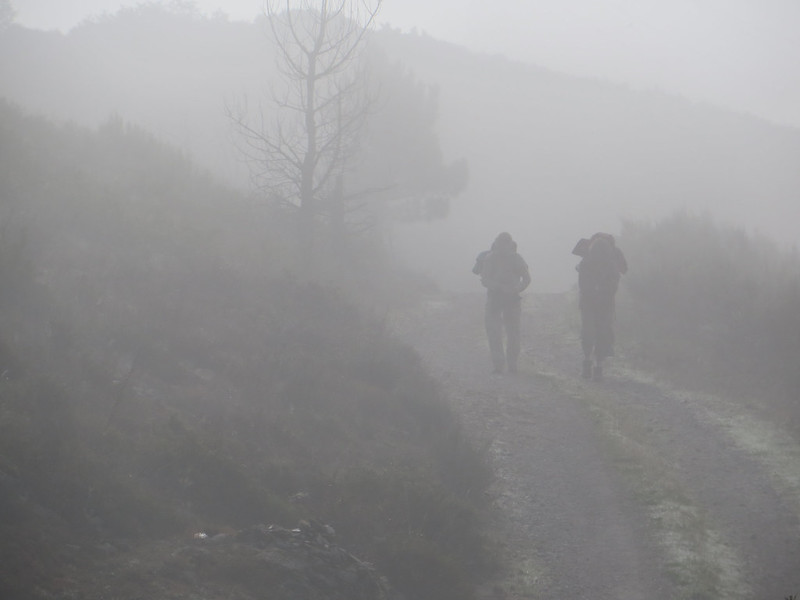 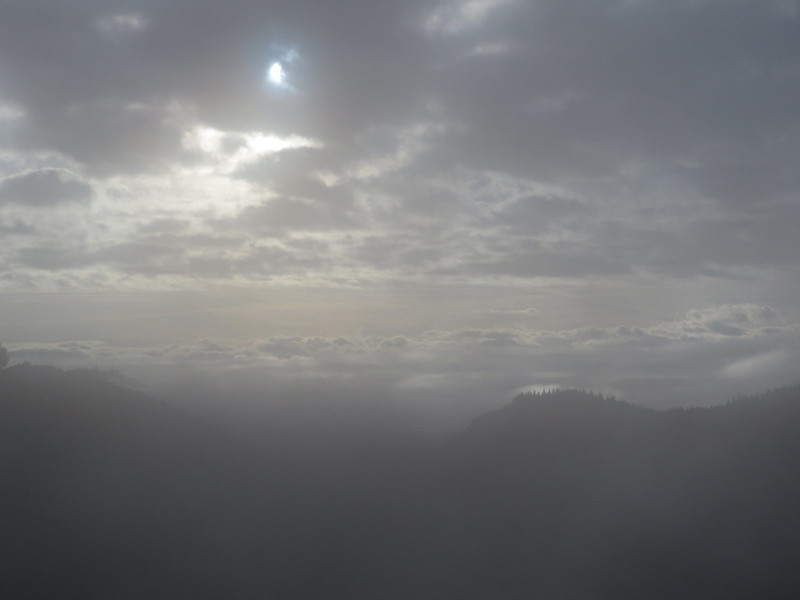 Eventually as the day grew warmer the ghost-mist retreated and evaporated into the atmosphere. 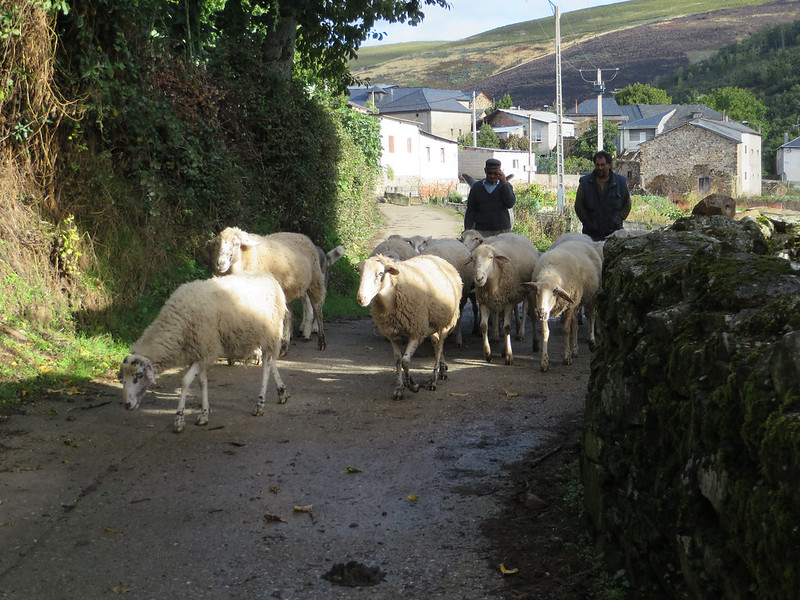 I stopped in a tiny farming village for lunch, but not before an old Spanish man stopped to talk to me. This was another moment when I wished that I knew Spanish. He had a donkey and was herding some sheep. He was insistent on telling me something even though I told him no entiendo. 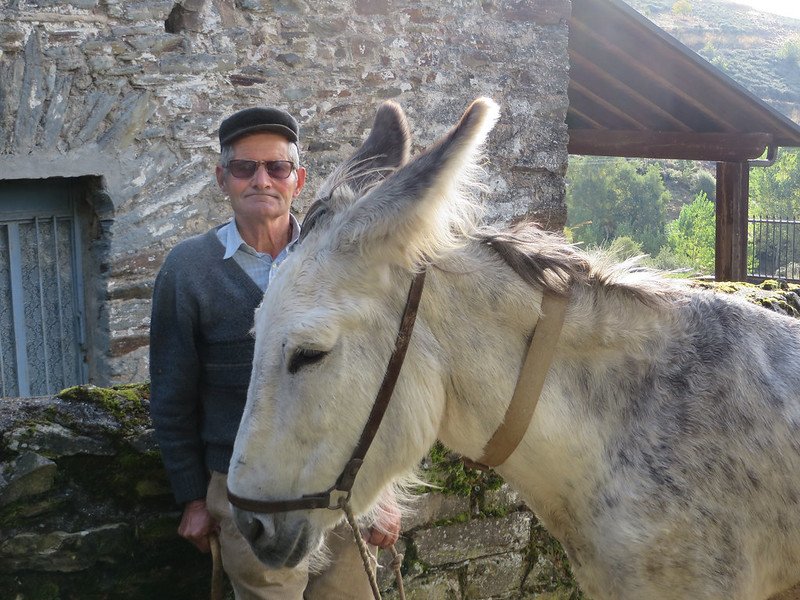 Eventually, we gave up and each continued on our separate ways. 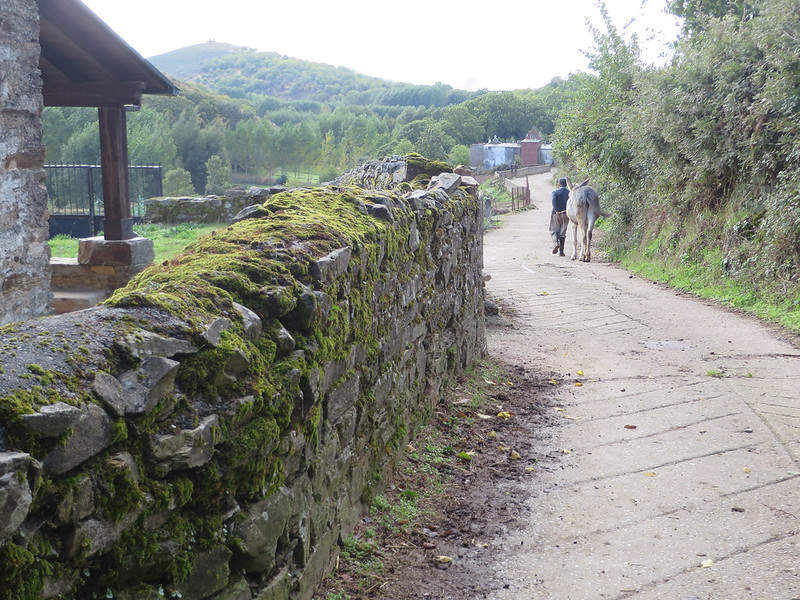 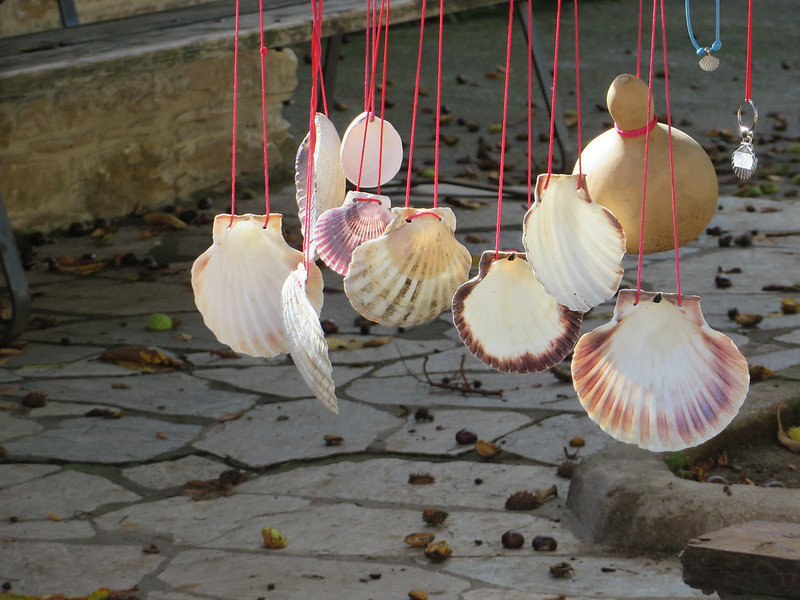 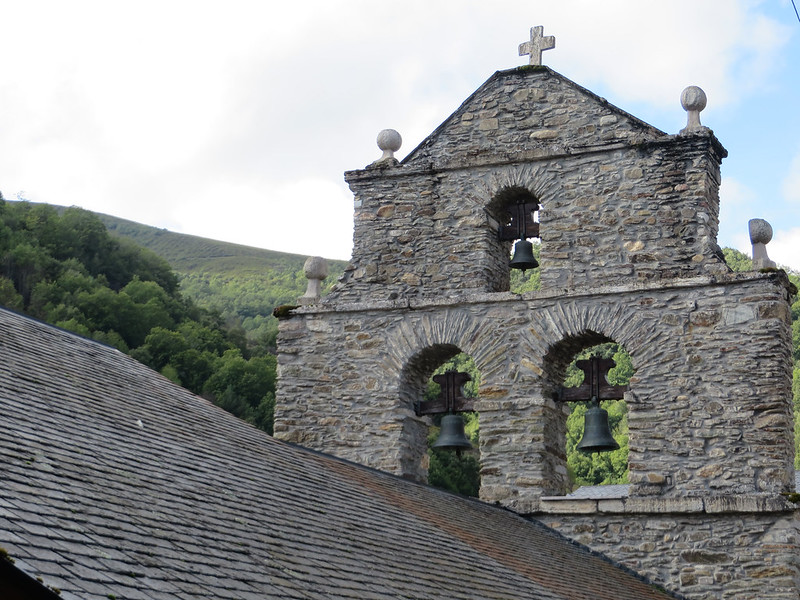 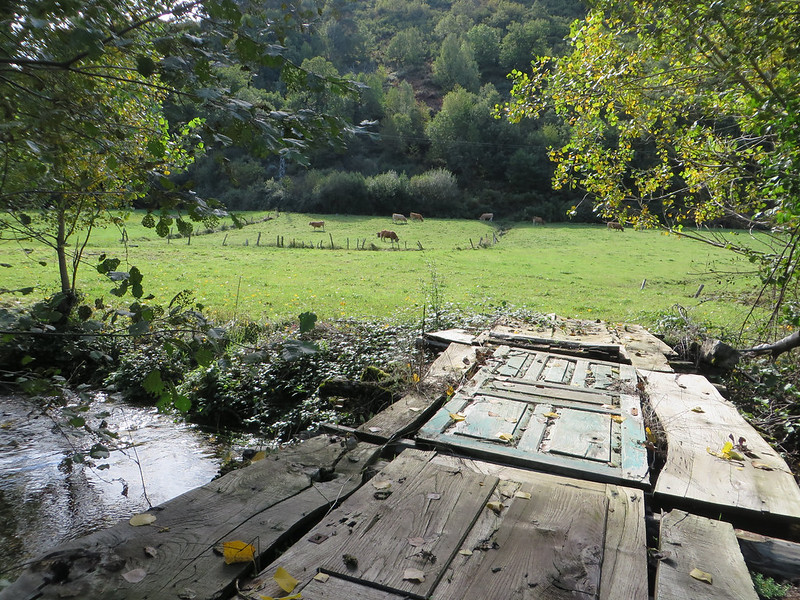 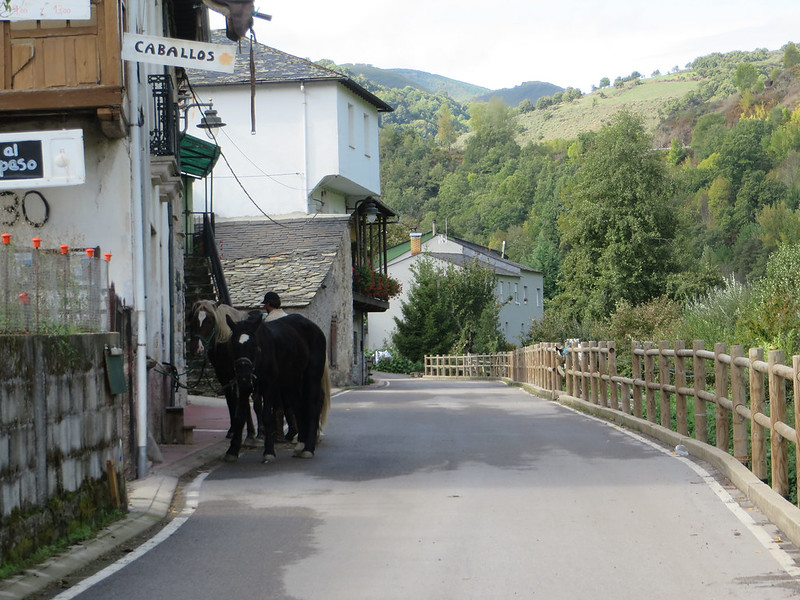 The air became heavy and muggy. I could feel the sweat dripping down my body again and I needed to strip down to my tank top. The gravel crunched under my feet as I climbed the big hill past Herrerias. It was during this section that I had a power struggle with the flies. They go for the eyes, nose or mouth it seems – so frustrating! I learned a lesson not to swat at them while the loop of the pole is still around my wrist. I clocked myself pretty good in the eyebrow with the butt of the handle. The rest of the time, I walked with two poles in one hand so I had a free hand to wave around my face.

I was so distracted by the flies, that I lost the Camino waymarks. Instead of taking a left, I went straight which added a few kilometres to my 30 kilometre day. The flies relentlessly taunted me and buzzed around my face. Frustrated, I threw my pole at them. I’m not sure why I thought that would work. The pole only landed in a muddy ditch and I had to fish it out with my other pole. So, as karma would have it, I had to hold the wet, dirty handle of my pole and silently accept my defeat.

The views opened up the higher I climbed. 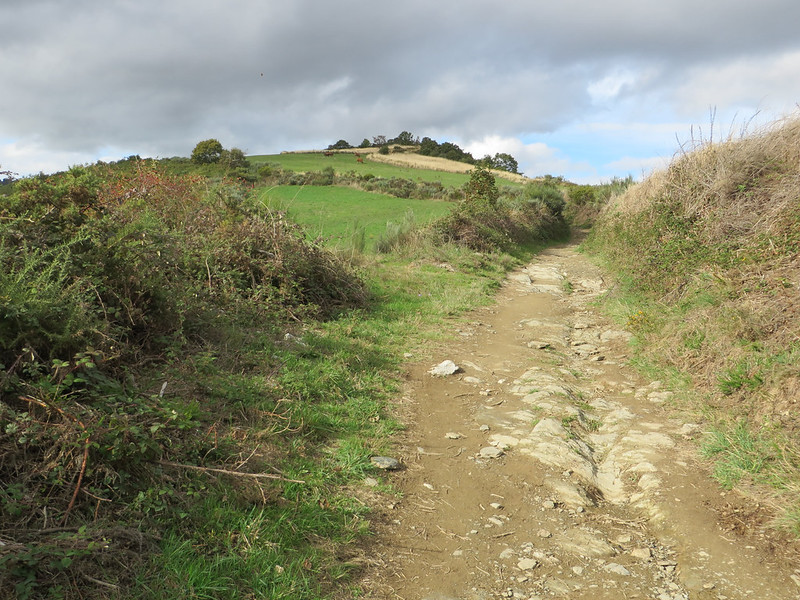 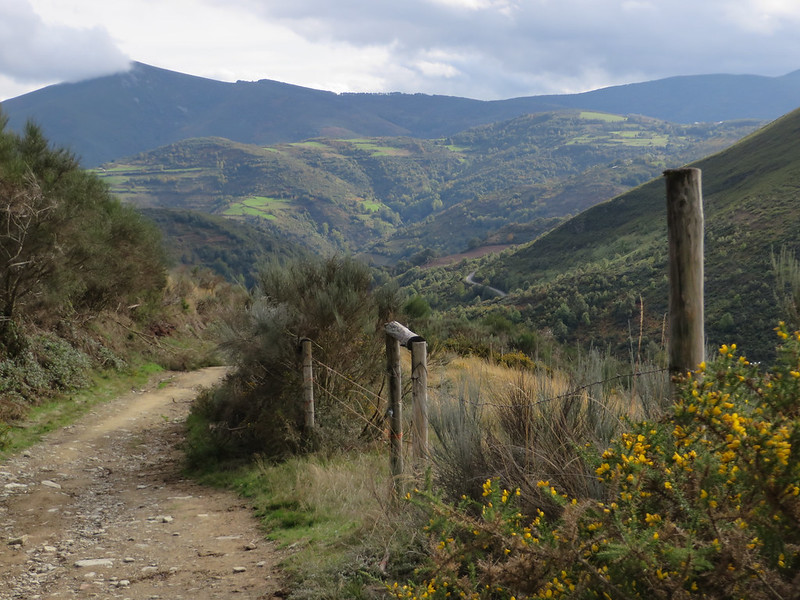 A retired Aussie couple I often see along the way was sitting at a café-bar, so I joined them for a much needed glass of vino tinto. 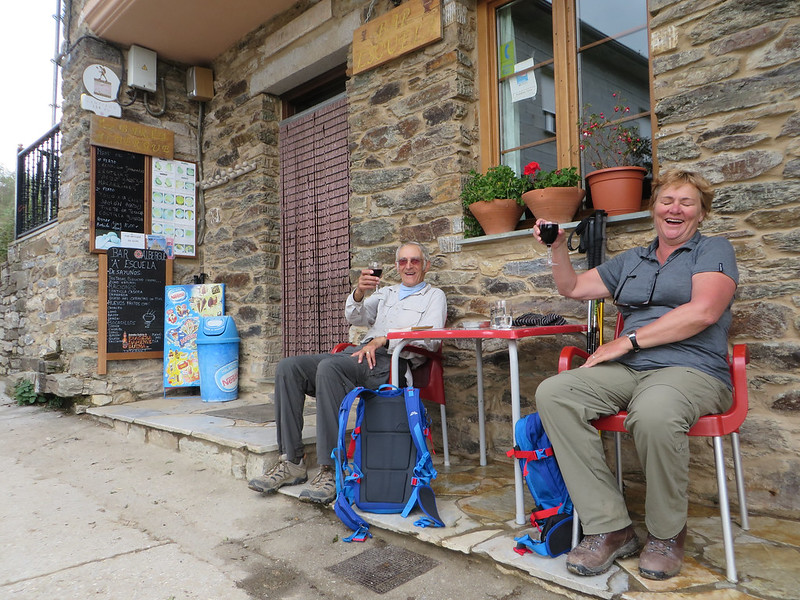 It was a relief to finally make it to O’Cebreiro, a small, but beautiful stone village nestled at the top of the mountain. 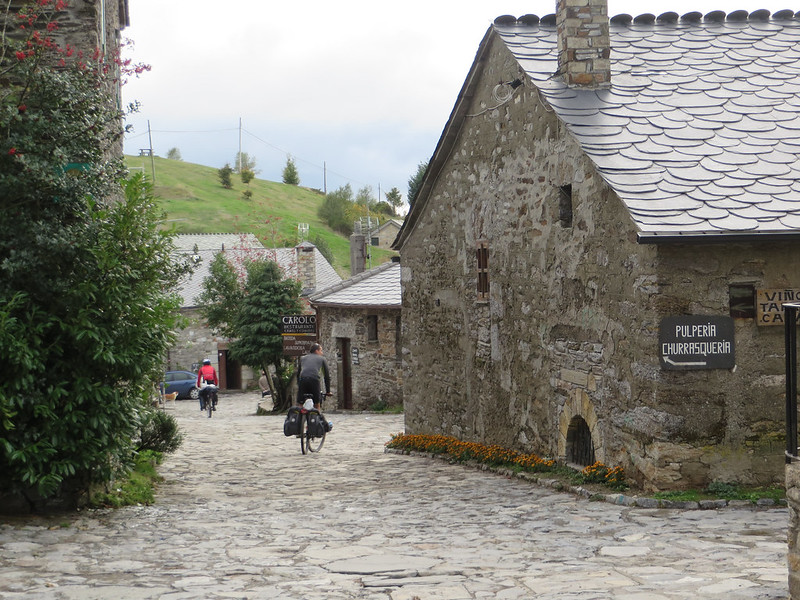 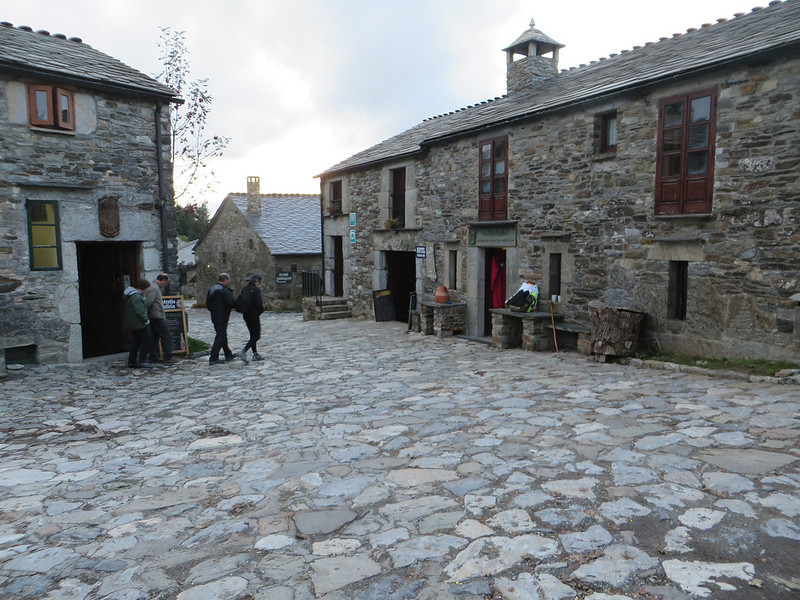 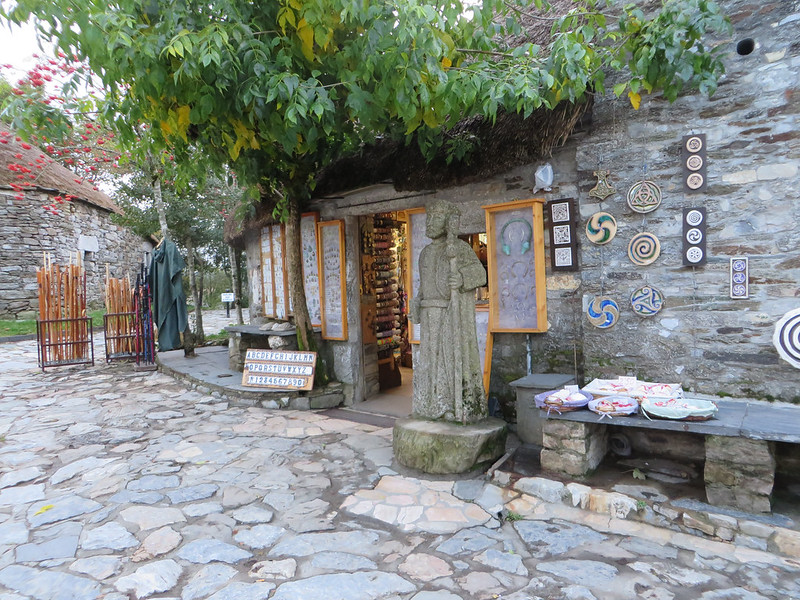 Everything is stone: the streets, the buildings and a lovely old stone church. I wandered into the church at the same time that a crowd was leaving. There must have been a mass. 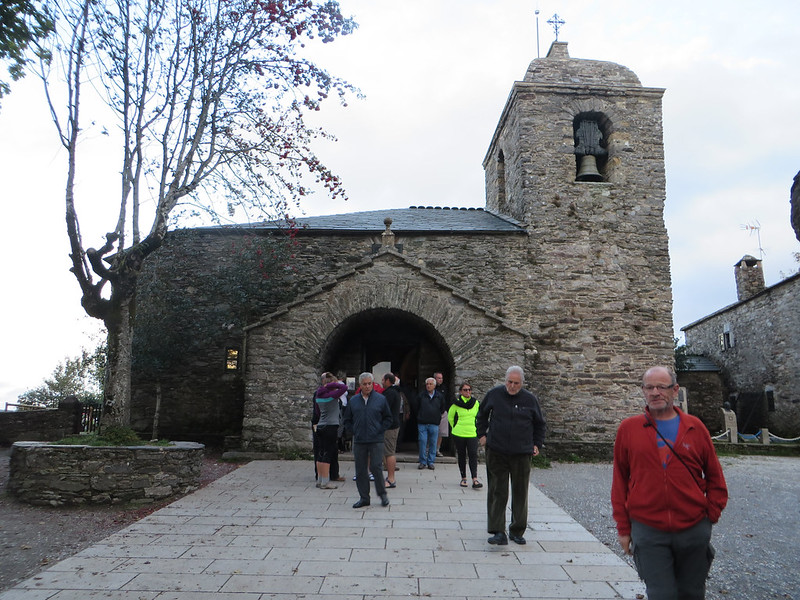 The church was empty when I took a seat in the second pew. I soaked in the tranquility. Music played softly. I’m not sure how to describe it other than it was fitting for a church. I closed my eyes and prayed again with the small brown rock that the Spanish man gave me in the palm of my hand. Some things came to my mind that I should have prayed about at Cruz, so I prayed about them here. 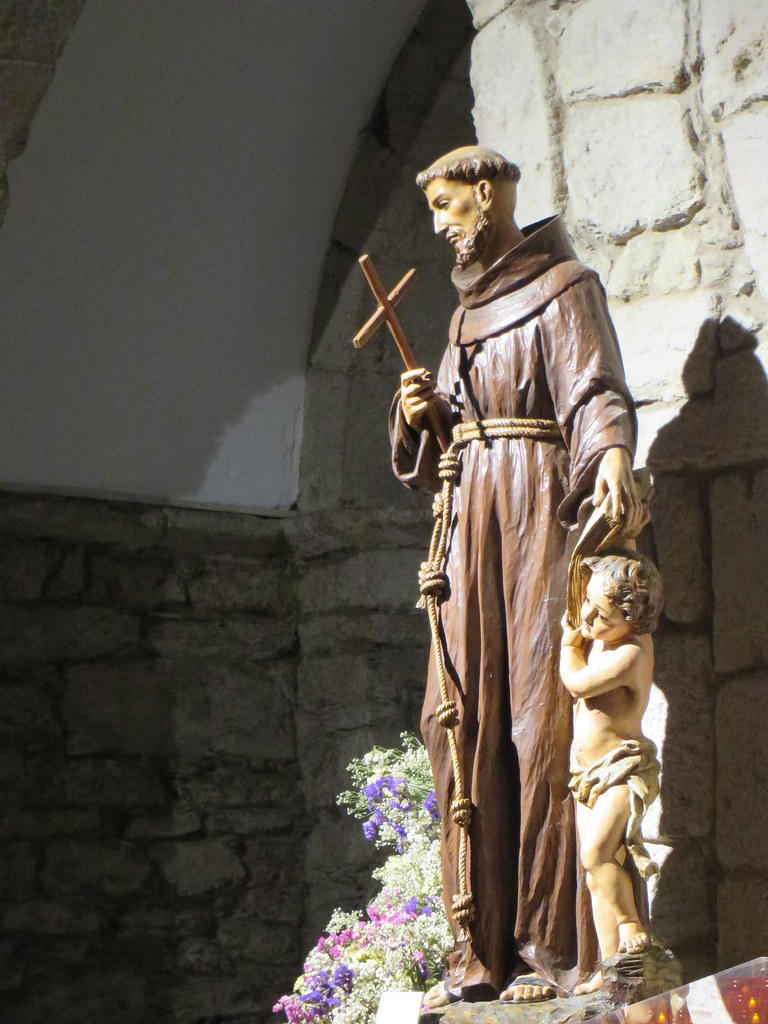 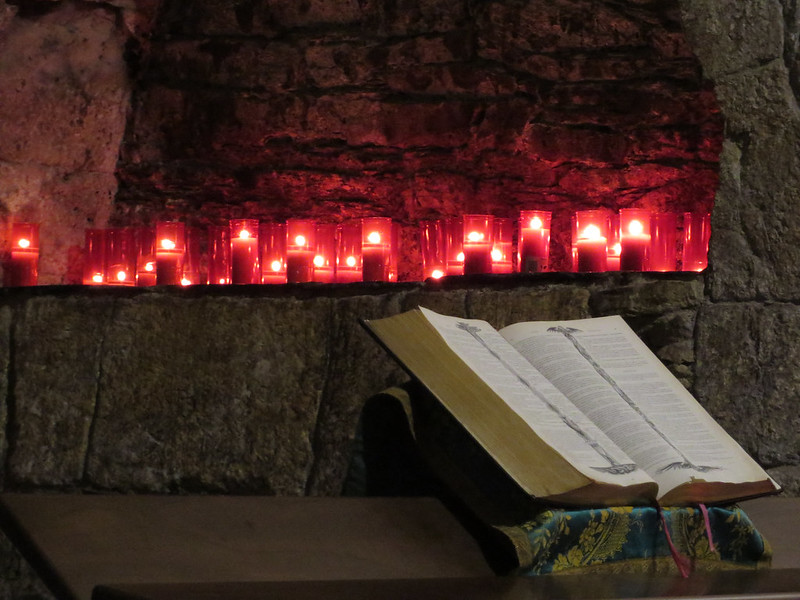 Three men suddenly opened up in Spanish prayer, sometimes one, then all three together. The sound of their voices was soothing. I didn’t understand anything they said except “Camino” and “Amen”. It didn’t matter. Just being present listening to their voices was enough. When they finished I stood up and approached the statue of Our Lady holding the child. I lit another candle and placed it with the others. 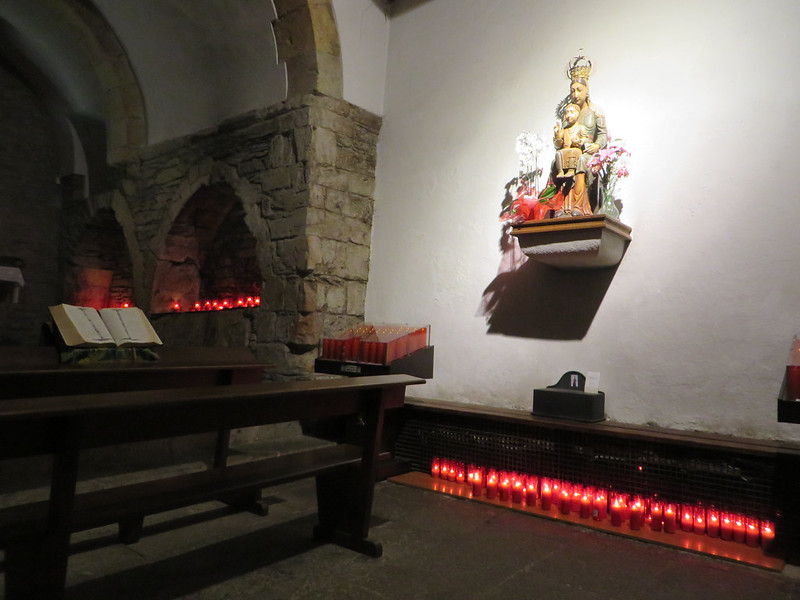 When I left, it was dark. I realized that I had been in the church for quite some time. 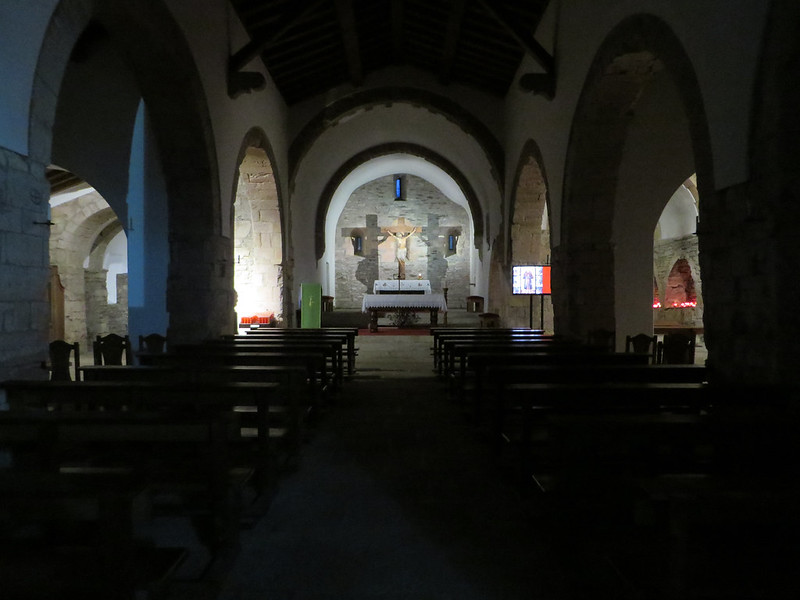 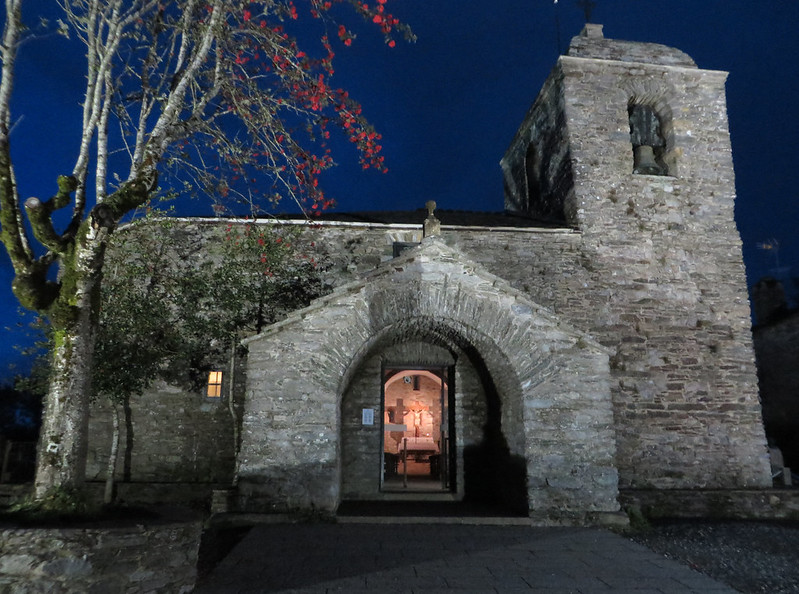 A nearby restaurant was teeming with pilgrim activity and many familiar faces. The Aussie couple I walked with for a short time today invited me to sit with them for dinner. 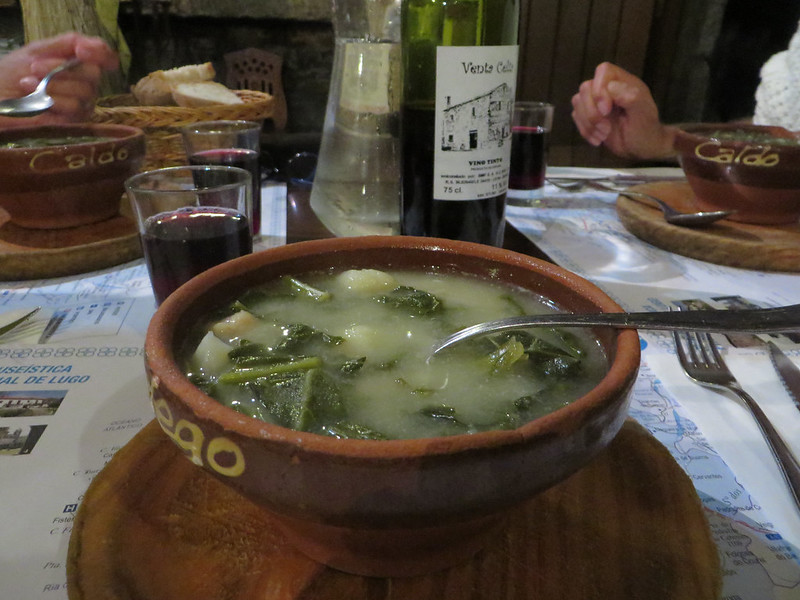 They told me they had met rowing, both out of other marriages. He was from England and she from Australia. Now, they live in Australia together and, after the Camino, plan to visit his grown up kids in England. Since I have bumped into them quite frequently, they have adopted me as their away-from-home daughter. When I told them I had a son who was 22 years old they were shocked.

Now, it is time for a good night’s sleep as I journal from a comfy armchair in the albergue foyer with my sleeping bag liner covering my lap. It’s late and all the pilgrims are in bed – I can hear the snoring from here! Unfortunately, there are no extra blankets, so I’m all clothed up and ready to nestle into my sleeping bag liner. It’s a big, loud and stinky dorm tonight. Earlier, while I was in there, I could smell the ripeness of pilgrim sweat from today’s climb. It may be a long night!