Currently, I am enjoying the most flavourful apple I have ever sunk my teeth into.

This morning I met 23 year-old Nathan, from San Diego, California. He and I decided to raid apple trees on the outskirts of a small village called Santibanez de Valdeiglesia. 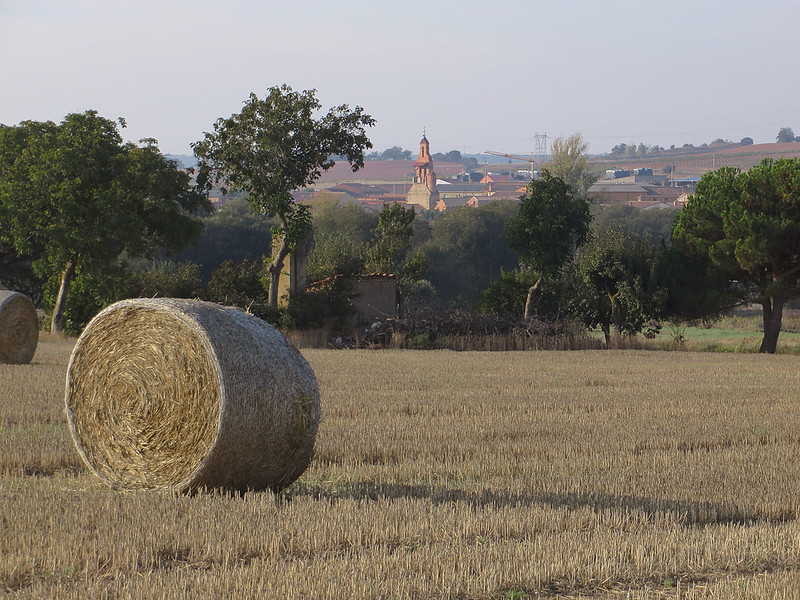 The trees were alongside the road and full of nice sized apples which were accessible via fence post. Nathan pulled some down off of a low-hanging branch while I climbed the fence post to get at the higher, but bigger apples. 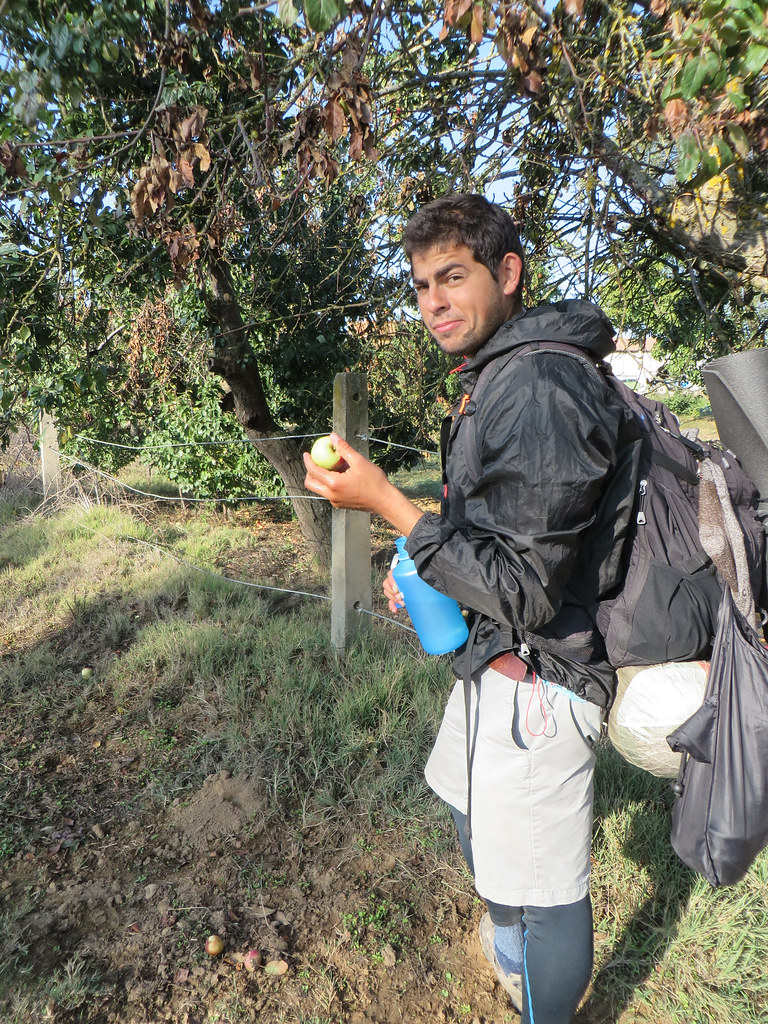 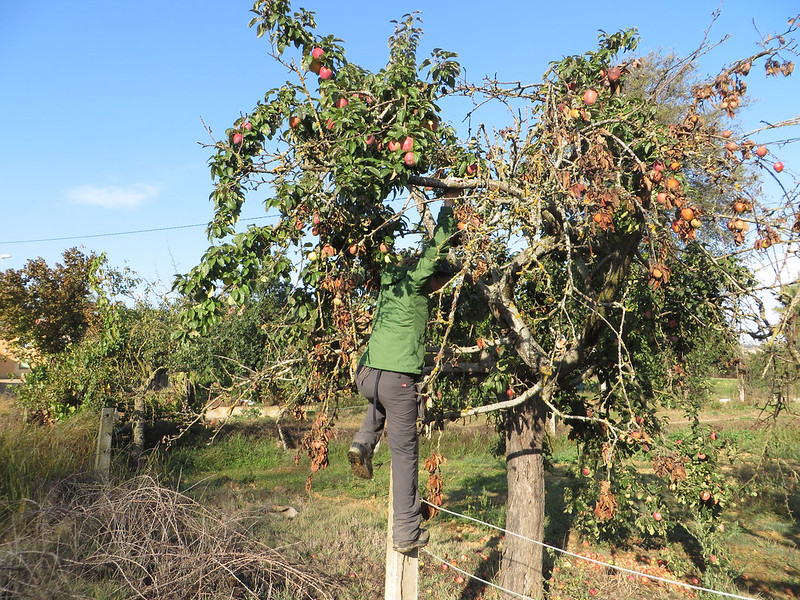 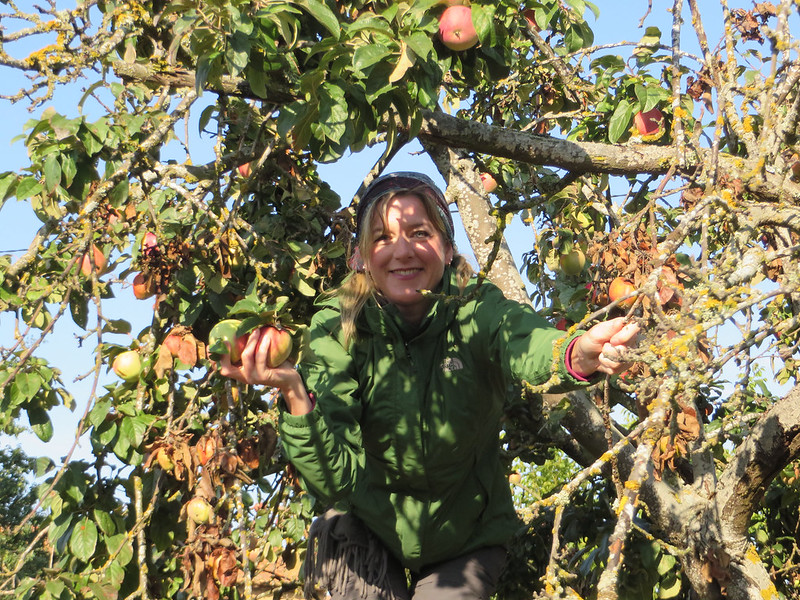 They will likely be my dinner tonight since I splurged on a pilgrim’s lunch for nine euro this afternoon. The dinner at the albergue is another 13 euro, so I would rather eat apples and save my money for tomorrow.

Nathan began his Camino in north central France. He is an art history major with a concentration in medieval studies, but before he settles down into a career he wants to experience the world. He is Jewish, but like many of us his reason for walking the Camino is about figuring some things out in his life. 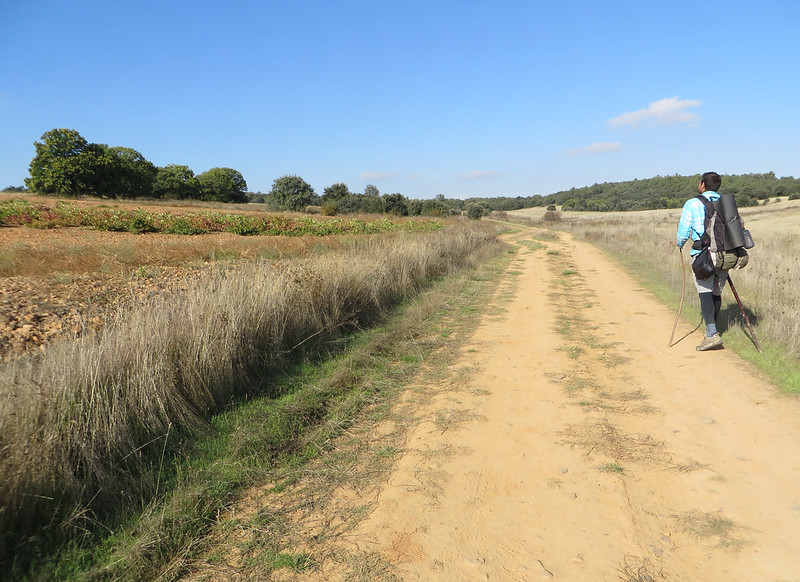 Nathan enjoys gourmet cooking. All of the talk about his favourite savory dishes, like the one with roasted red pepper sauce, was making me hungry!

We reached a little cantina approximately six kilometres before Astorga. 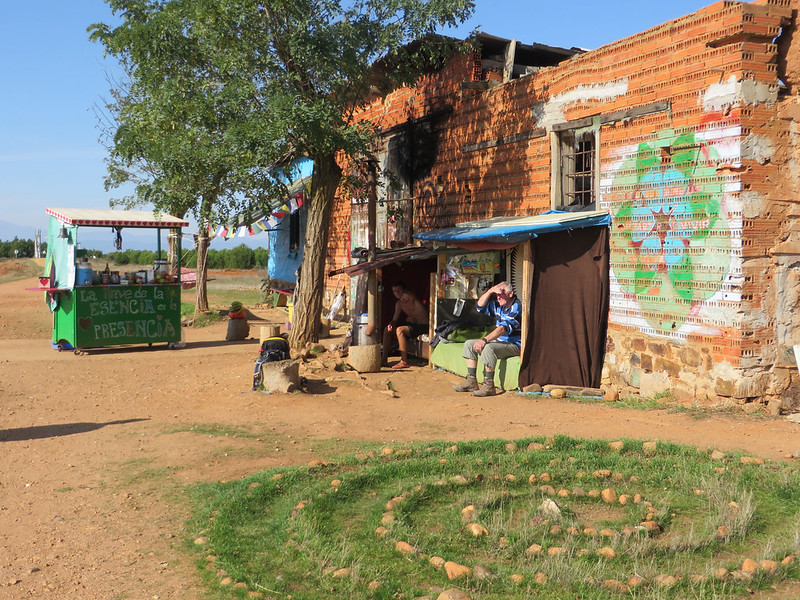 It was the highlight of my day actually. The cantina provides shelter, food and drink for pilgrims all for free! It includes fresh water, a variety of organic juices, fruits and teas with biscuits and different spreads. 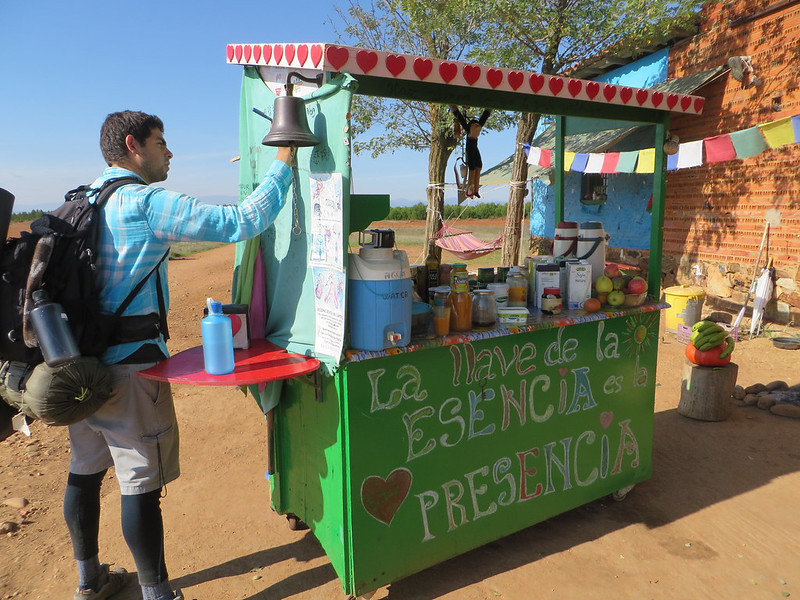 I couldn’t believe it! The facilitator, David, has lived here and run the cantina for four years. 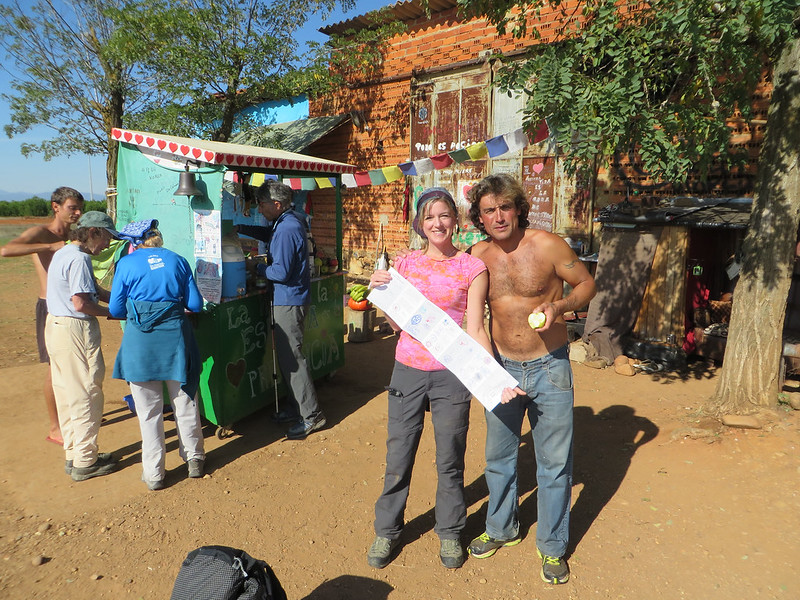 The cantina is called The House of the Gods and its purpose is to serve the pilgrims, to provide nourishment and to share. 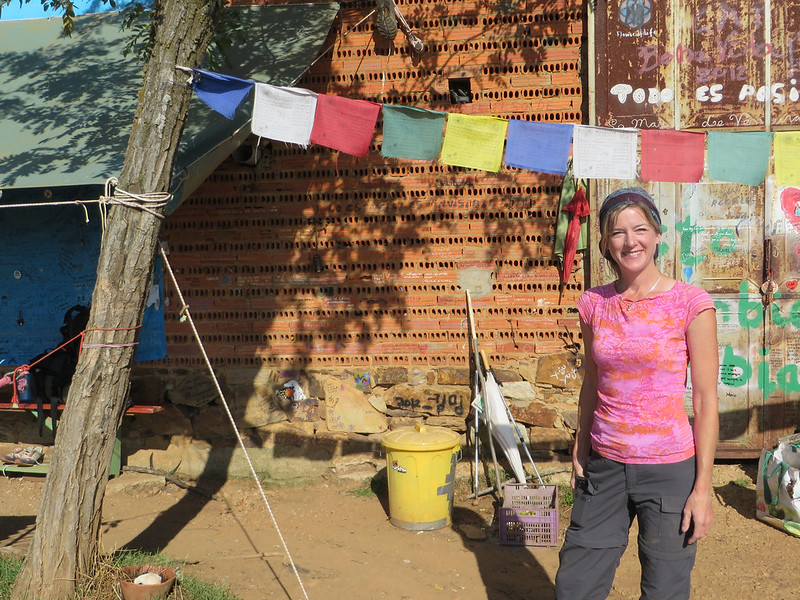 The walls are decorated with painted artwork and pilgrims’ messages of encouragement and love. 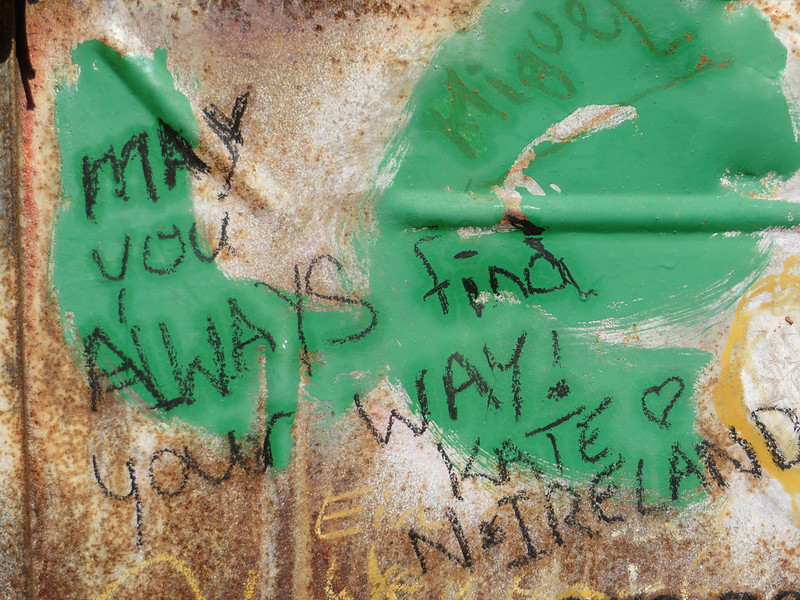 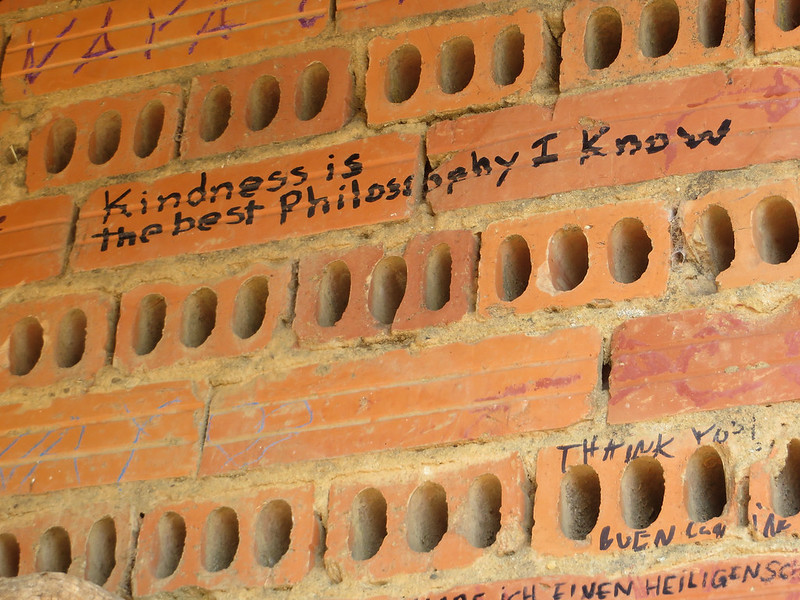 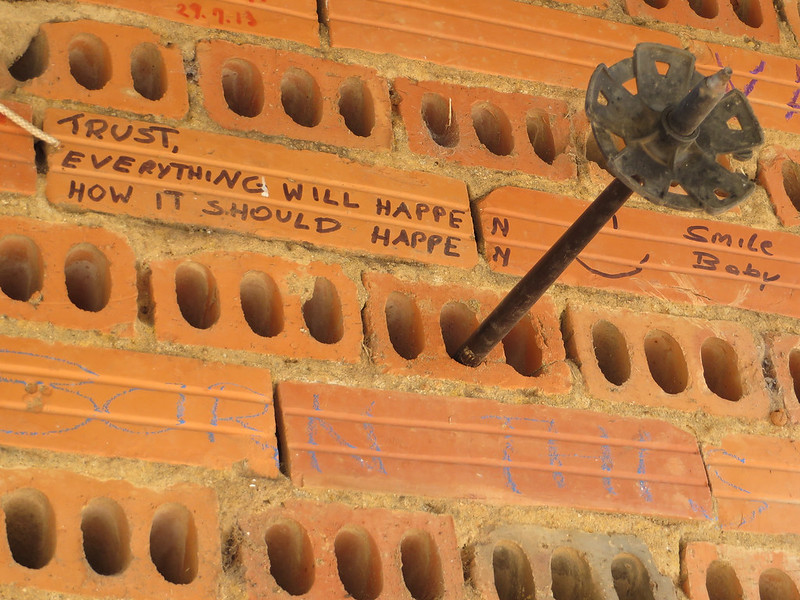 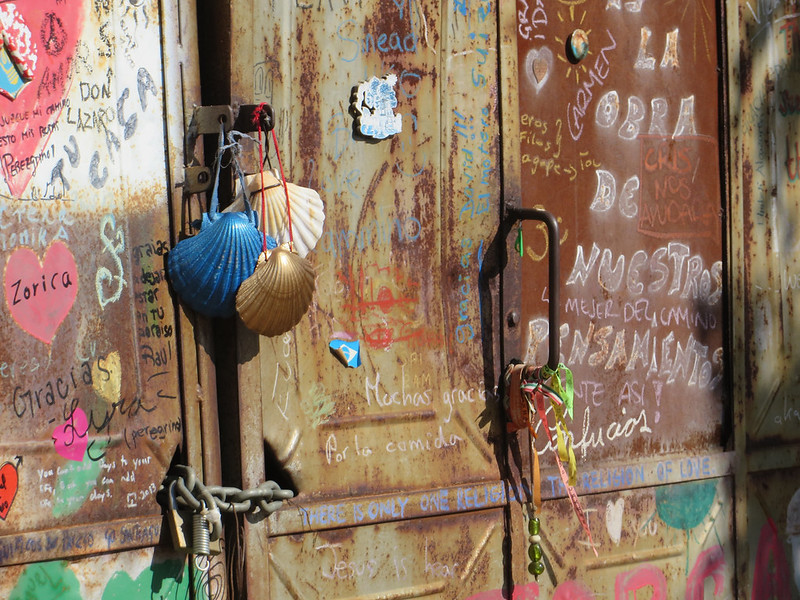 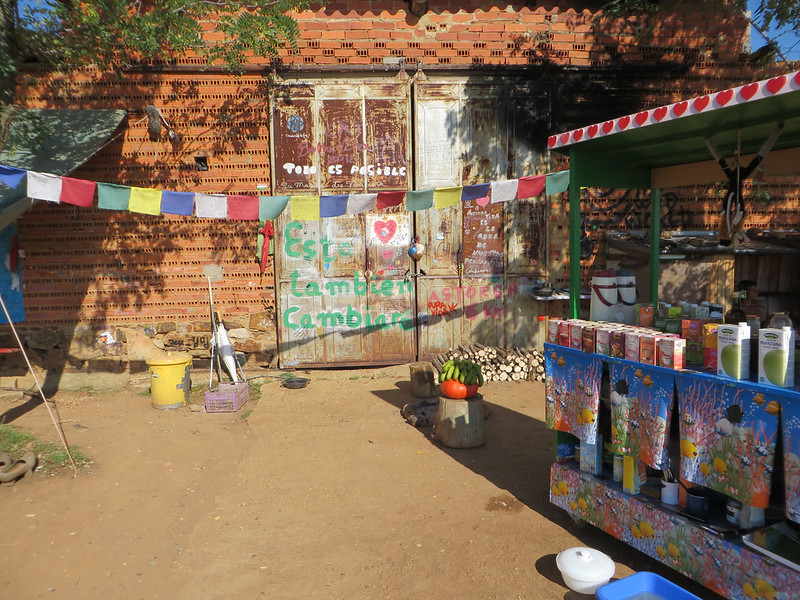 Cozy covered benches provided a welcoming space to rest and visit for a while. 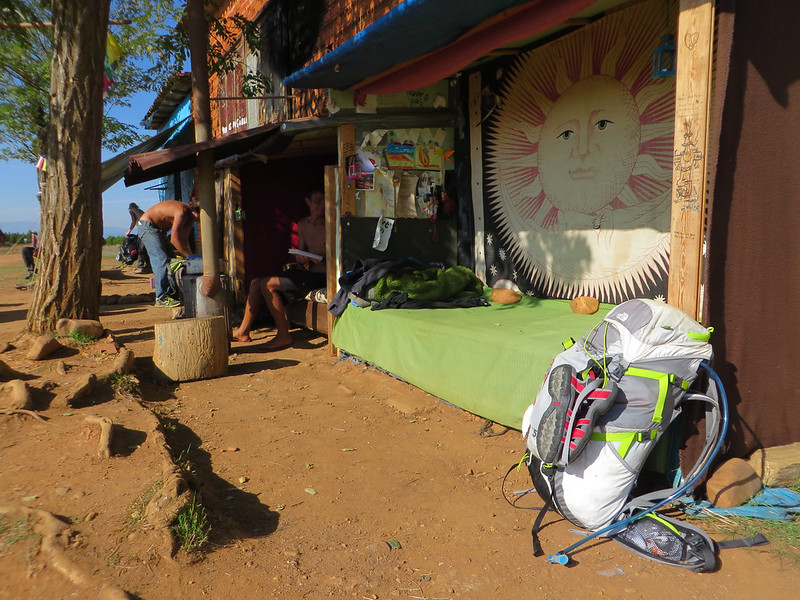 Both Nathan and I were in awe, so we off-loaded our packs and shed our hiking boots for a while. This place was worth spending time at. Nathan was even planning to spend the night.

I spoke mostly with Andrei, a resident of the cantina who has been living there for two and a half weeks and who plans to stay indefinitely. 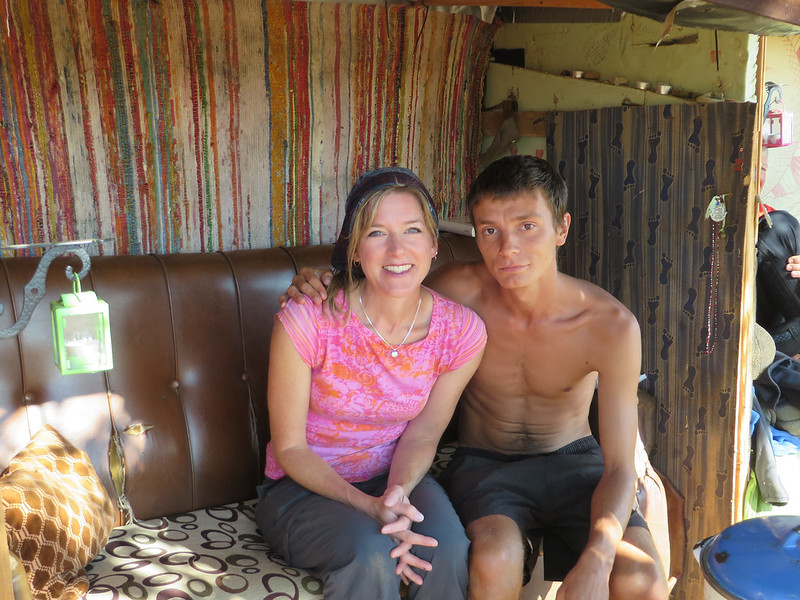 He says he has everything he needs and the only thing left to do is share. 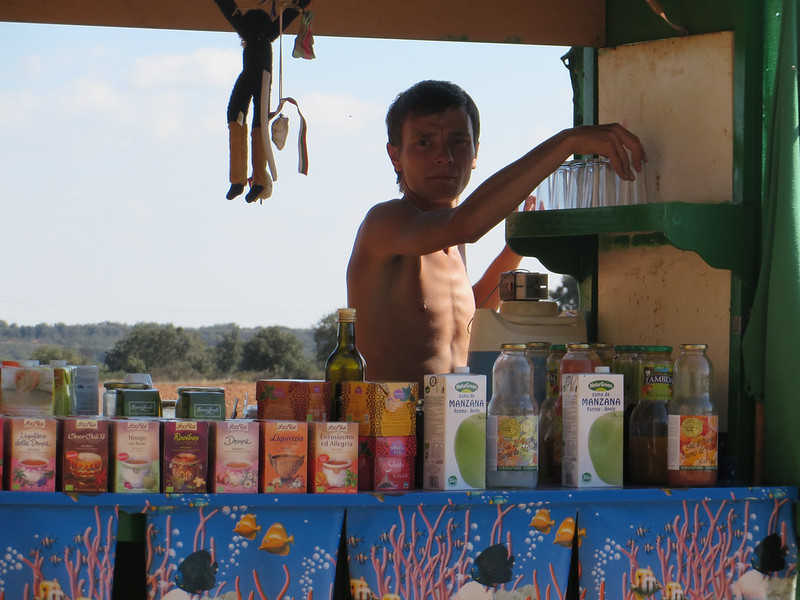 Andrei first discovered this place last year on his first Camino and was so inspired by it that after he arrived in Santiago he returned for two months.

He eventually flew home to Transylvania, Romania to appease his worried mother and to settle things in his life. He spoke with his family about his intentions to live at the cantina, then sold most of his belongings and set back out on the Camino for a second time. Now, after his latest finish he has returned again, but this time he intends to stay for much longer.

Andrei is young, but seems so wise and at peace with life living with less – a rich man in many ways. He often spends time in meditation. He said it saved him from an angry mind – very Buddhist-sounding to me. 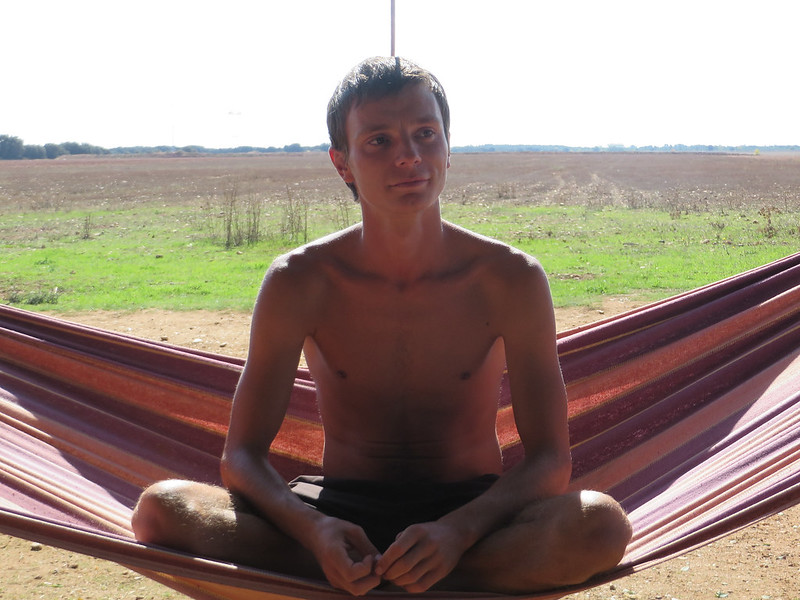 He says, “When you speak God listens and when you listen God speaks.” It is a very powerful message and it made me think about the odd little things that have happened along the way like receiving the rock from the Spanish man, noticing the 555 kilometre distance post to Santiago after asking the rock for something, the appearance of the white wolf in my dream, the song Somewhere Over the Rainbow resonating out of the bar the morning after I wrote the journal entry about my red sandals comparing them to Dorothy’s ruby red slippers – little things that wouldn’t mean anything to anyone else, but which are significant to me.

I said thank you and goodbye to Andrei and rang the bell at the cantina stand. 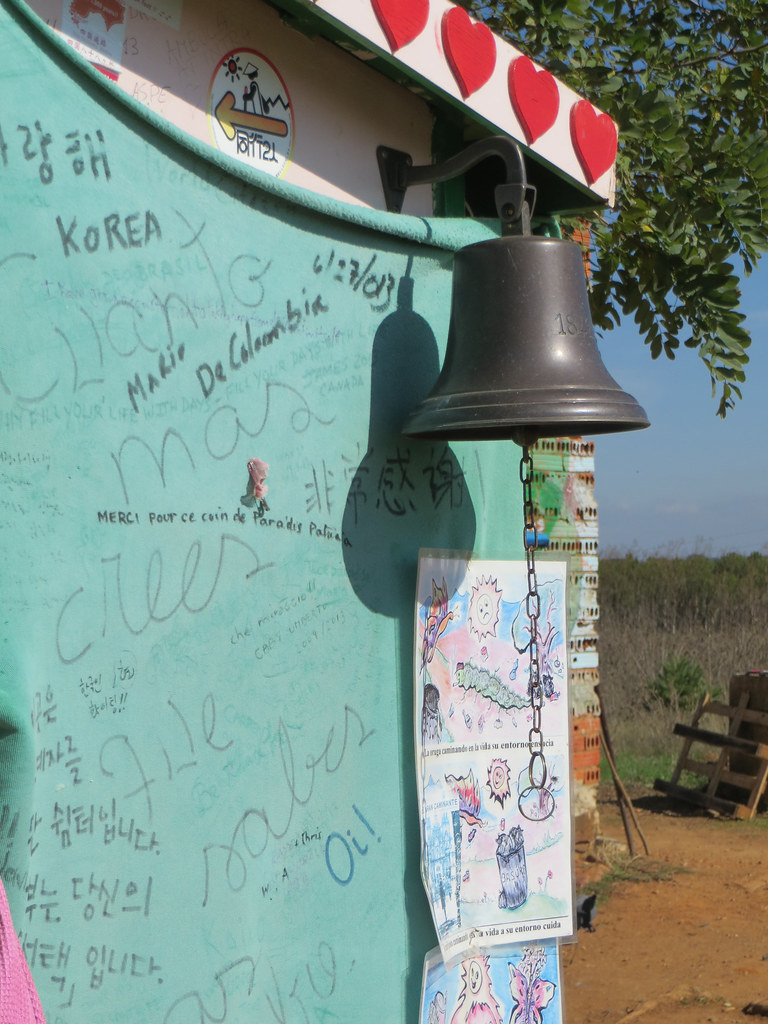 I shouted, “Buen Camino!” to everyone as I headed off towards Astorga. 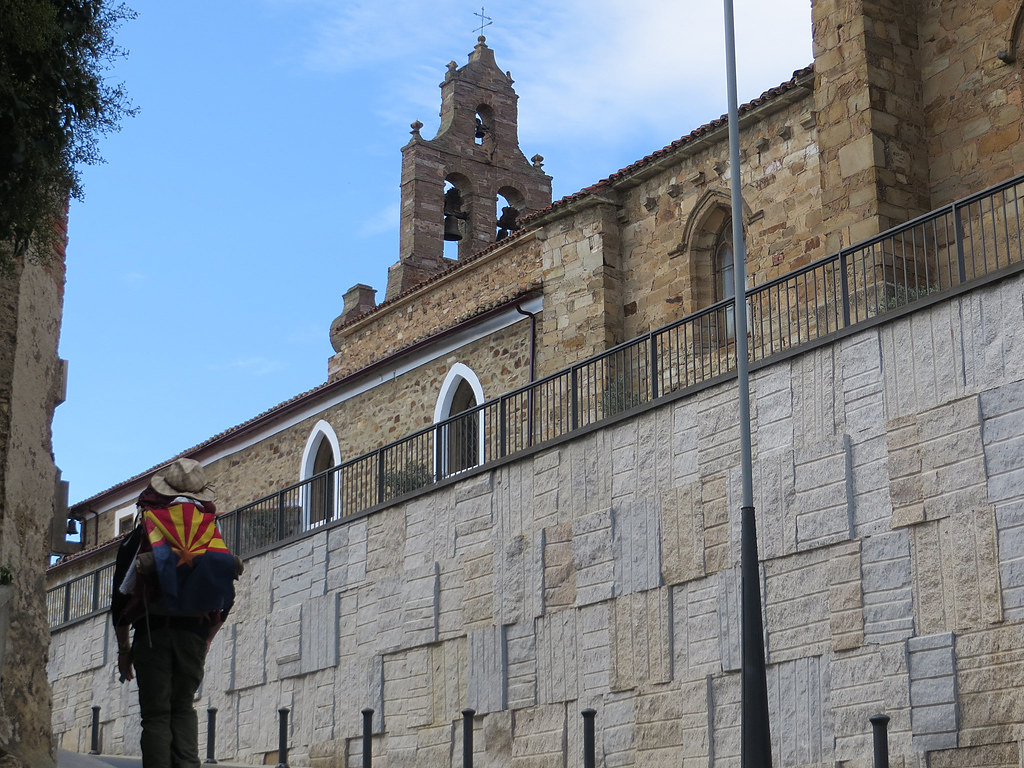 Eventually, I began walking with Joey from Arizona. He is a photographer documenting the Camino who also organizes art exhibitions. 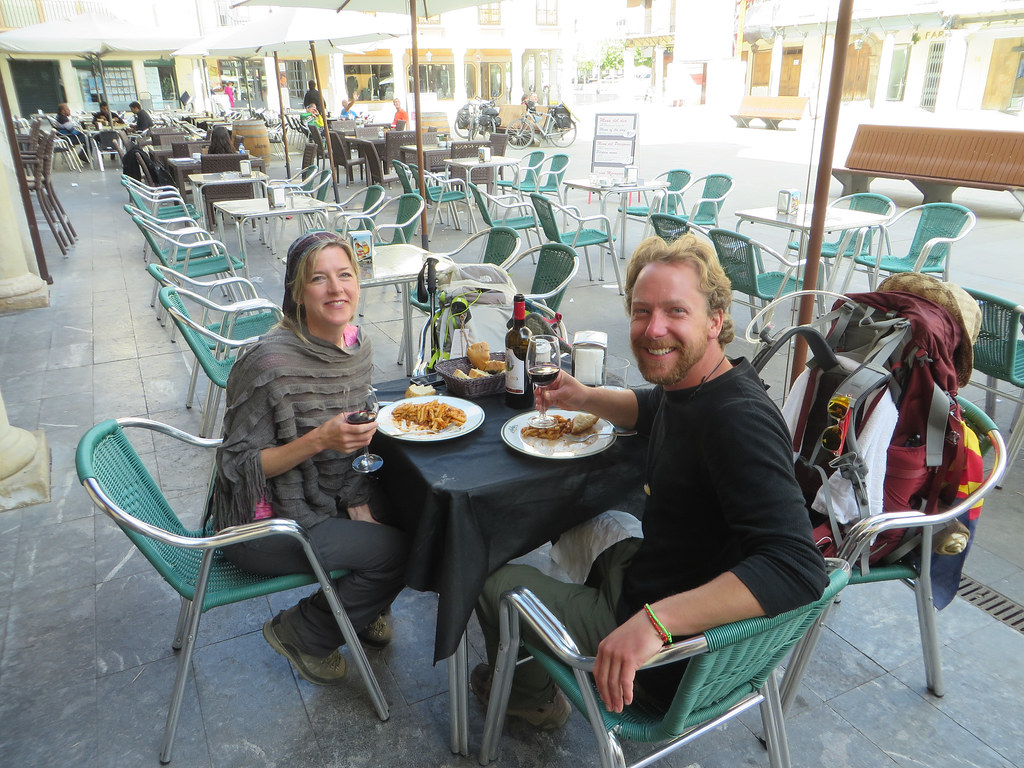 In Astorga we stopped for the pilgrim’s lunch in the plaza which of course included a bottle of vino tinto. 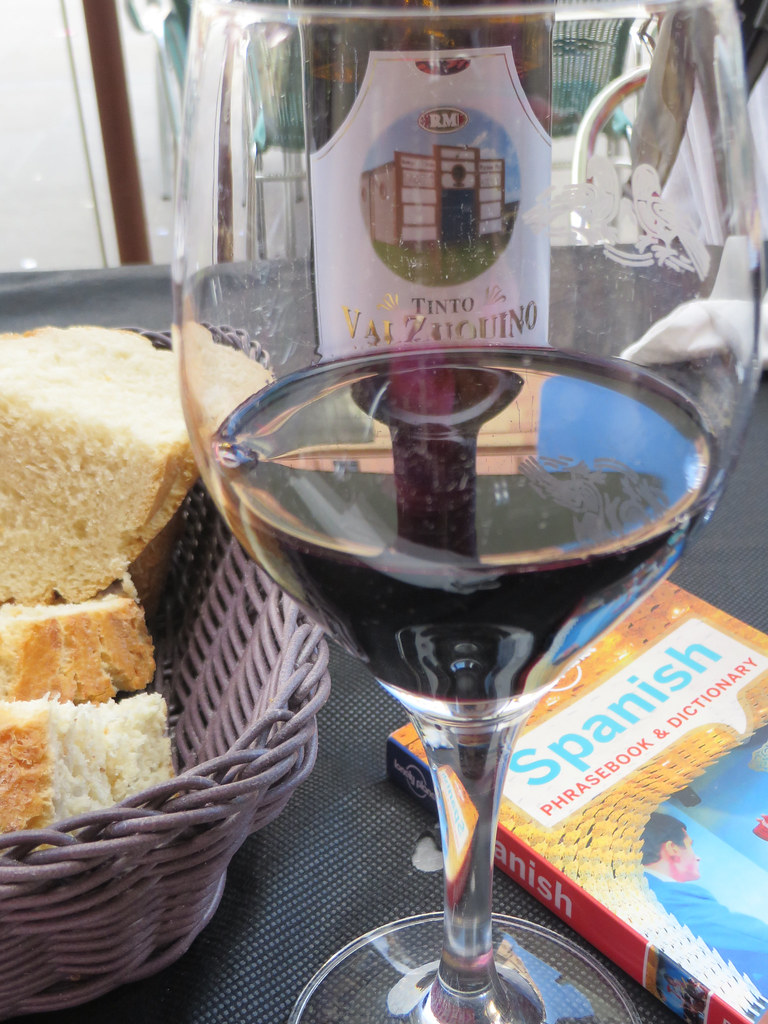 Tonight, at the albergue, I have run into language problems again trying to sort out laundry. Joey and I shared a load to save money. We got the wash going no problem, but when I returned later to put our clothes in the dryer the machine wouldn’t start, so I asked the hospitalero for assistance.

To make a long and frustrating story short, I discovered, through the help of a translator, that the hospitalero is the only one with the power to start the machine. Putting coins in the machine doesn’t make it work, although it accepts them anyways.

Earlier, the hospitalero had taken our laundry out of the washer and placed it in a basket on top of the machine in order to start another pilgrim’s laundry. Apparently, the other pilgrim had first dibs on the dryer (even though the dryer was not currently in use) because he paid the hospitalero four euro before we did. I’m still a little confused about it.

The hospitalero said he would put our wet things in the dryer once the other pilgrim’s clothes are dry. It won’t be ready until approximately 11:00 p.m. tonight. Ahhh well. At least I will have clean things tomorrow. It’s all good!

Time Lapse: It’s 12:40 a.m. and I just finished folding laundry in the rainy courtyard by the light of my headlamp. I laughed to myself as I stood under the awning in my long johns folding Joey’s socks and underwear, some guy who I had only met this afternoon. Where is he? you might wonder. He’s nestled inside his sleeping bag fast asleep. He doesn’t seem very concerned about the outcome of this. It’s a good thing he’s got me to save him from being a human clothes line tomorrow.