It was 4:30 p.m. in Carrion de los Condes when I first began writing this post. The late afternoon sun warmed my skin as I sat on a garden bench in front of another old stone church these Spanish villages are built around. 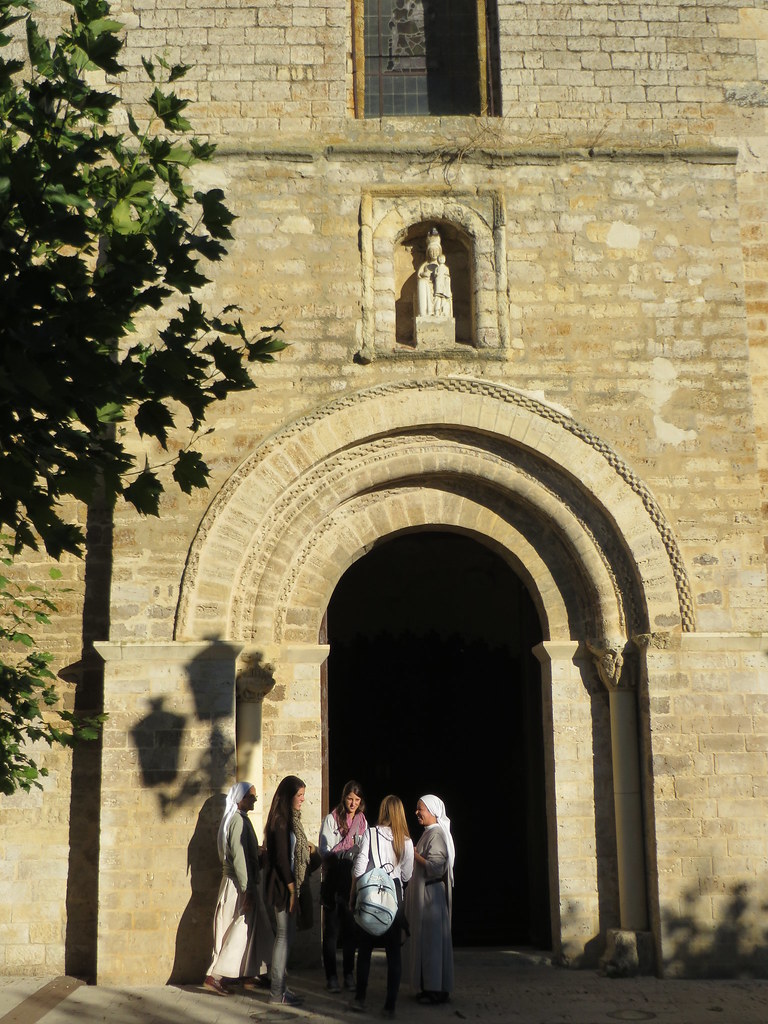 Opera resonated from an open apartment window and a couple of nuns wearing white habits stood quietly chatting with three young women under the church’s arched doorway, the carved figure of Our Lady holding the Child sitting protectively above.

The dramatic aria danced around me while I wrote. It enveloped me and swept me away to another time until a Katy Perry tune from a nearby bar brought me back to 2013. The contrasting sound of a traditional, emotional and dramatic composition mixed with popular American top forty sounded strange.

It’s been a busy afternoon and evening, so I have had to stop and start writing again many times. Currently, I am sitting upright in bed number eight, a top bunk, journaling on my tablet. Lights are out and a few pilgrims are rummaging through their packs, the only light being cast by a few electronic devices like mine.

Beginning back at the bar in Castrojeriz, I said goodbye to the bartender. Before I left, I used my translator app to find out how to say, “Thank you. This has been a great morning.” You say it like this, “Gracias! Esta ha sido una buena manana.” We shook hands. My efforts were appreciated.

As I walked down the street towards the farmacia a Spanish man from the bar ran out and called after me in English, “Thank you very much for the pins and tattoos for the children!”

We stood along the road chatting briefly before I continued on my way feeling very elated at the wonderful morning I had just experienced. When I saw that the farmacia was still closed at 10:30 a.m. I didn’t care. It was Sunday. It would not likely open at all, so I continued out of town. 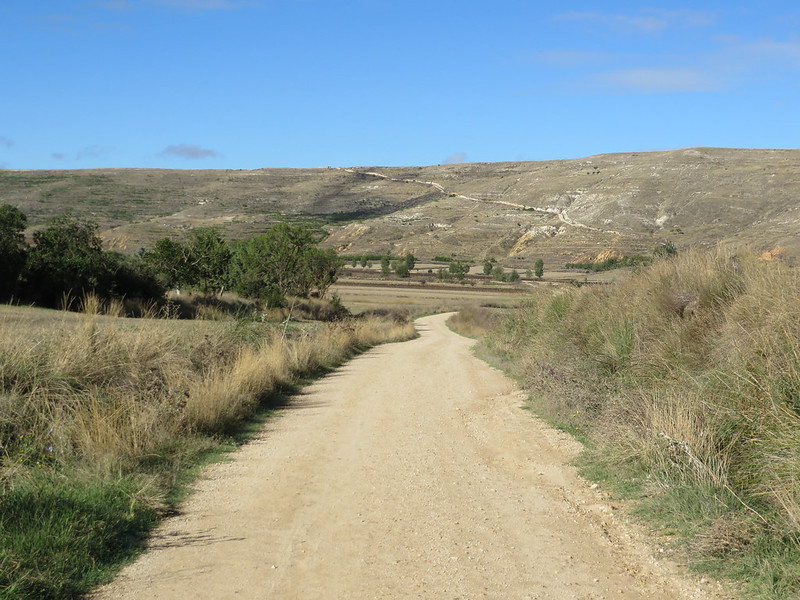 It took me nearly all day to get to Boadilla del Camino. As I climbed the dusty dirt road, I passed Torbin from Denmark who was resting near the crest of the hill savouring his last glimpse of Castrojeriz nestled against the hill crowned with the medieval ruins of the 9th century Castelo de Castrojeriz. 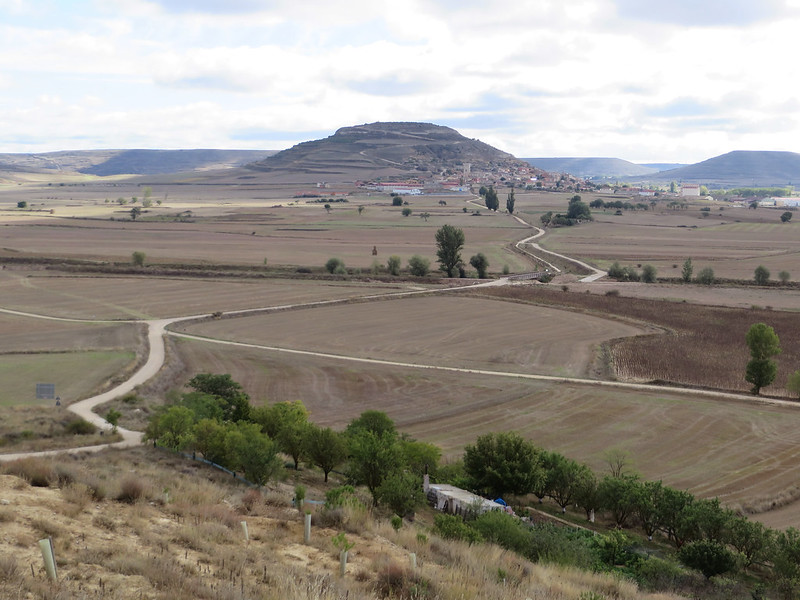 He was taking it slow today too and enjoying the peace and solitude of his morning.

The landscape rolled out before me on the other side of the hill. The dirt road weaved its way between the wrinkles in an endless blanket of dry grasslands. 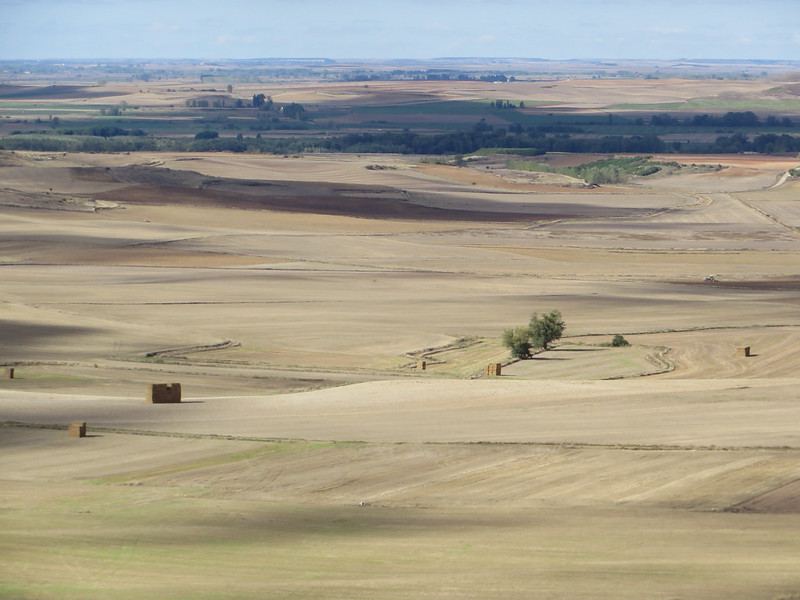 Perfect for the Dances with Wolves soundtrack, so I plugged in my ear buds and let the symphonic composition gently move me across the Spanish plain. 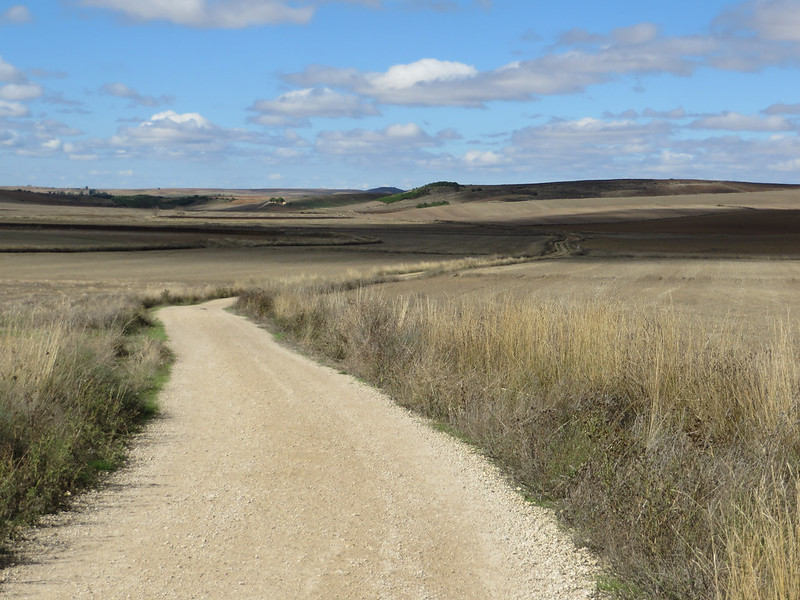 At one point I looked back and saw Michael, Hedi and another pilgrim. 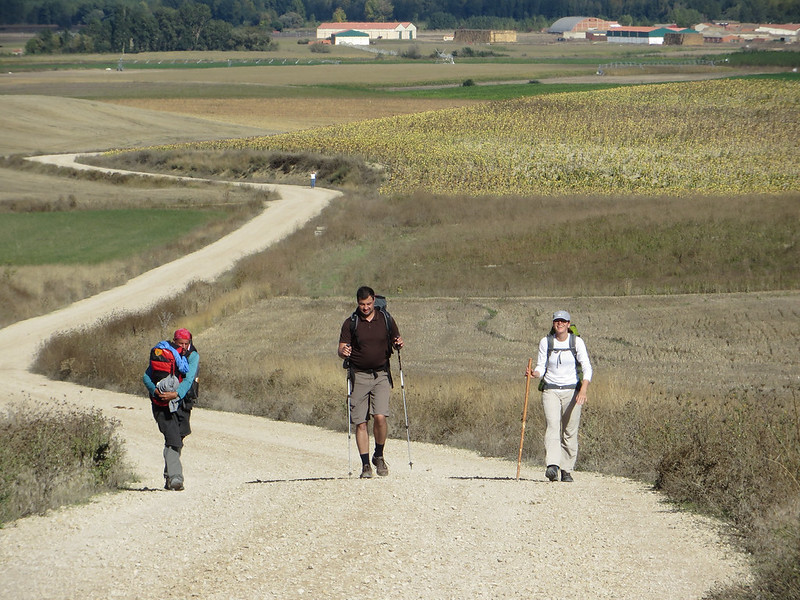 They must have stayed in Castrojeriz too. The new pilgrim was carrying not only a pack on his back, but one on his front too. His name is Alex, a lawyer from New York. His partner, Svetlana, from Russia, was trailing quite a distance behind, obviously not prepared to carry a heavy weight for long distances. 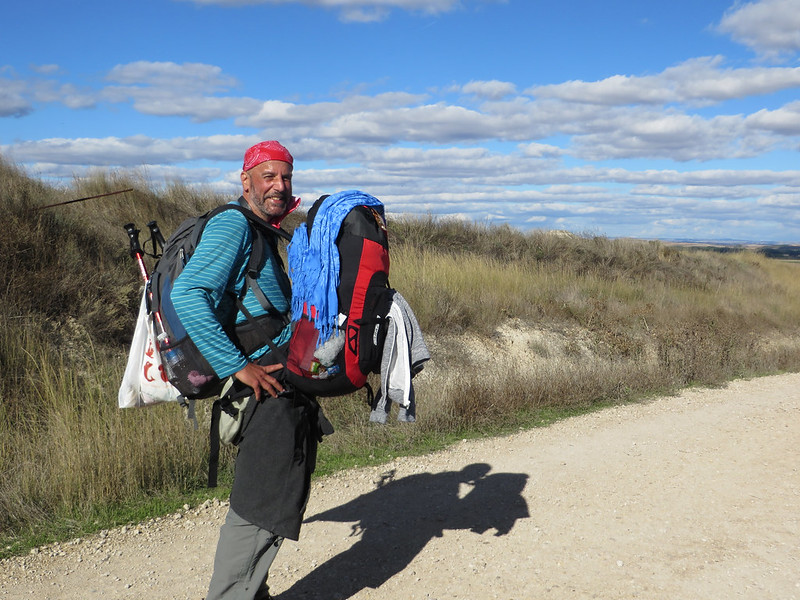 Poor Alex looked like he was the pack horse on this journey. Everyone carried on ahead while I walked slowly favouring my left leg.

Michael and Hedi were sitting on a patio when I arrived in Itero de la Vega. So was Philip (below) from Hamburg, Germany who I had met on my way out of Burgos. 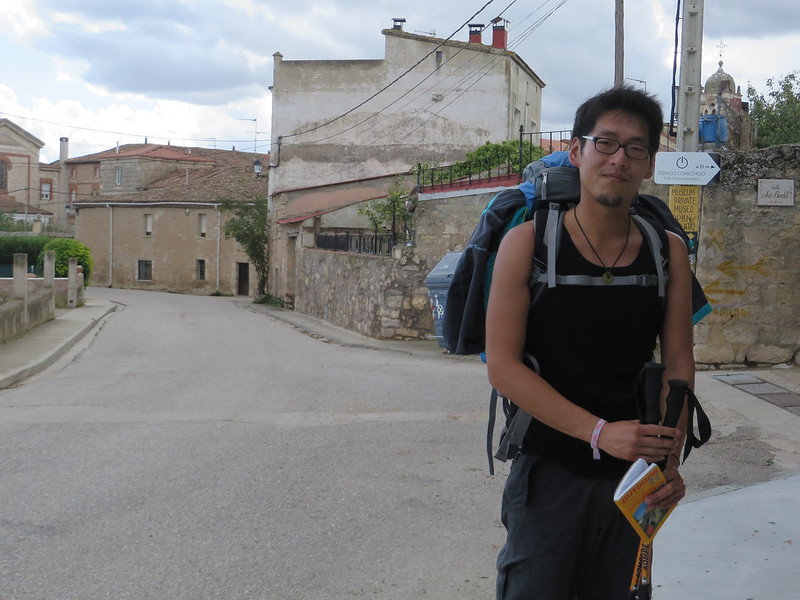 I joined them with a hearty bowl of lentil soup and a basket of sliced baguette.

They all showered me with concern over my bandaged leg. Hedi, being a nurse, re-wrapped my leg with the elastic bandage I was wearing, but had to put gregarious Michael firmly in his place. He had all kinds of his own advice to share, his best idea being to drink a whole lot of wine to numb the pain.

Phillip gave me his roll of first aid tape since he is at the end of his journey. He has run out of time, but will begin again from here next year. We said our goodbyes and then I carried on.

Upon arriving at Albergue En El Camino in the small village of Boadilla del Camino, I was surprised and delighted to see so many pilgrims sunbathing and lounging on the grass. Seeing the camaraderie made me wish I had arrived earlier so I could have taken part in it all. Not only that, but that clear blue swimming pool would have been so refreshing to jump into during the heat of the day.

As much as I wish I could have walked faster to have experienced this sooner it wasn’t a sacrifice I was willing to make. I’d rather be the slow and steady tortoise than the overly confident hare sitting by the pool all day, but who doesn’t make it to the end because of a lame leg.

Among the many faces were Xavier from Australia, the Aussie girl who had been bitten by bed bugs in Hornillos del Camino, Suzanna from New Zealand, Alex the New York Lawyer and his partner, Svetlana, as well as Michael and Hedi from Bavarian Germany.

As quickly as I could, I climbed the stairs, dropped my pack beside a lower bunk, showered and then squared up with the hospitalero so I could join everyone by the pool, but when I returned the yard was near empty. 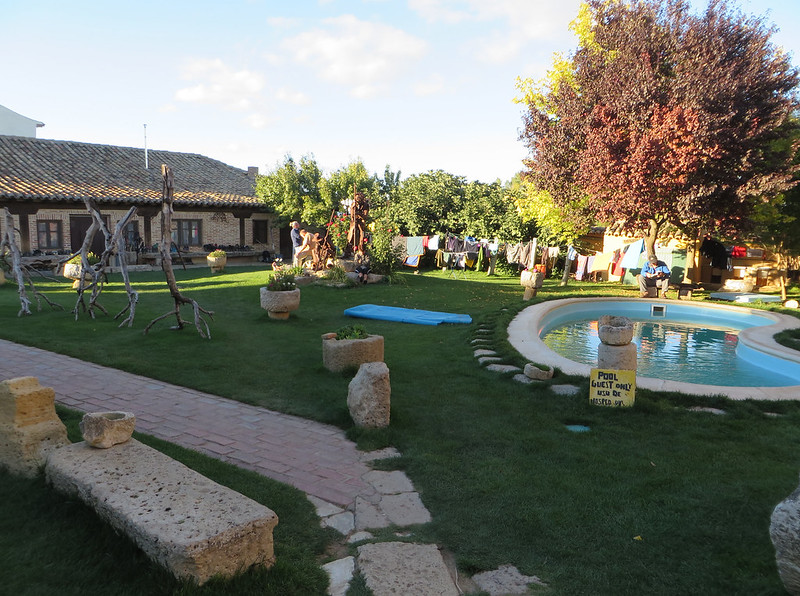 Some had gone in for dinner, but thankfully my familiar Camino friends had moved to a patio table for a drink. I ordered a glass of vino tinto and joined them. 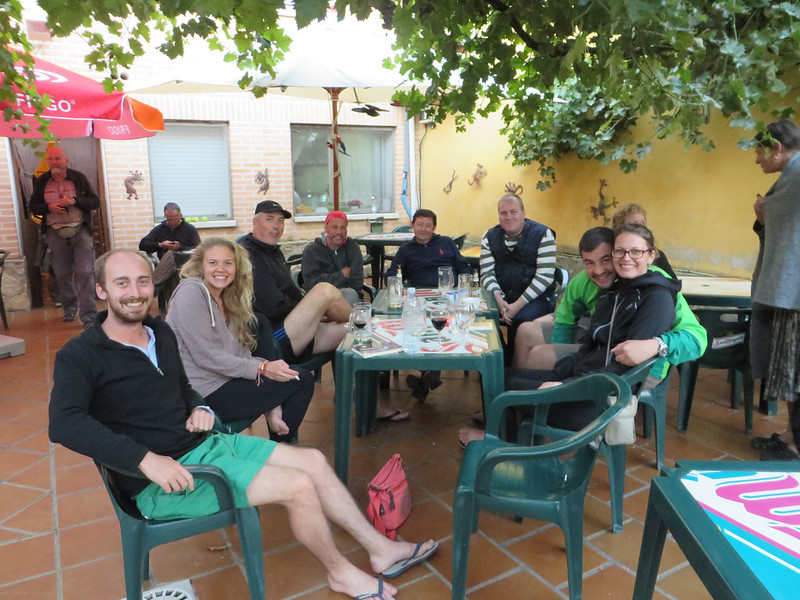 A Spanish man sitting at our table was feeling generous and paid for all of our drinks for the remainder of the evening. The dinner was also fantastic and included three varieties of soup and stew before our main course. 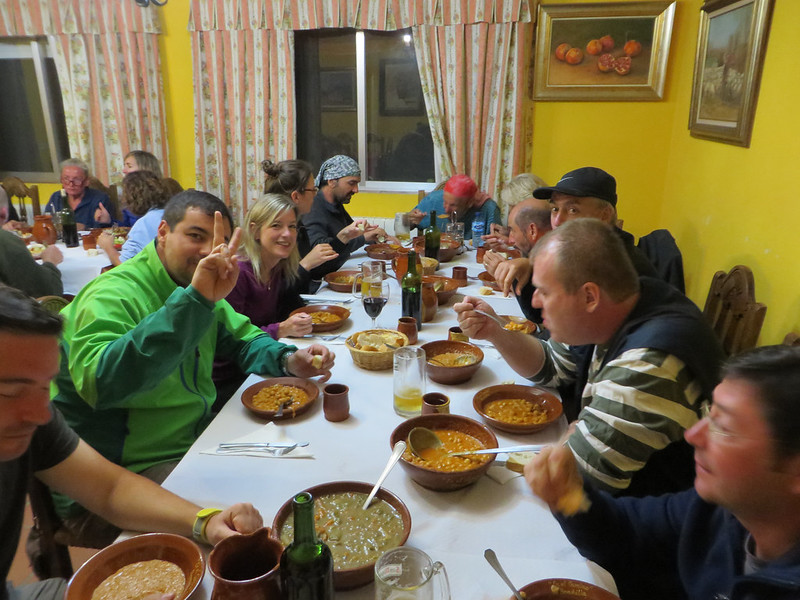 It turned out to be a satisfying evening with lots of lively conversation and laughter.