Just a couple of hours ago I was experiencing one of those helpless Camino moments that seem to creep up when I push myself to the limit.

Because of yesterday’s long walk into Burgos from Villafranca Montes de Oca, 40 kilometres we determined, my left shin is paying for it now. It’s been sore all day, so I walked very slowly with a limp to get here, Hornillos del Camino, only 21 kilometres from Burgos. That’s a distance I used to think was a good haul, but now consider only a short day.

Now, here I sit resting my leg on the warm baked concrete of this large patio with my back against the wall of an old stone church. 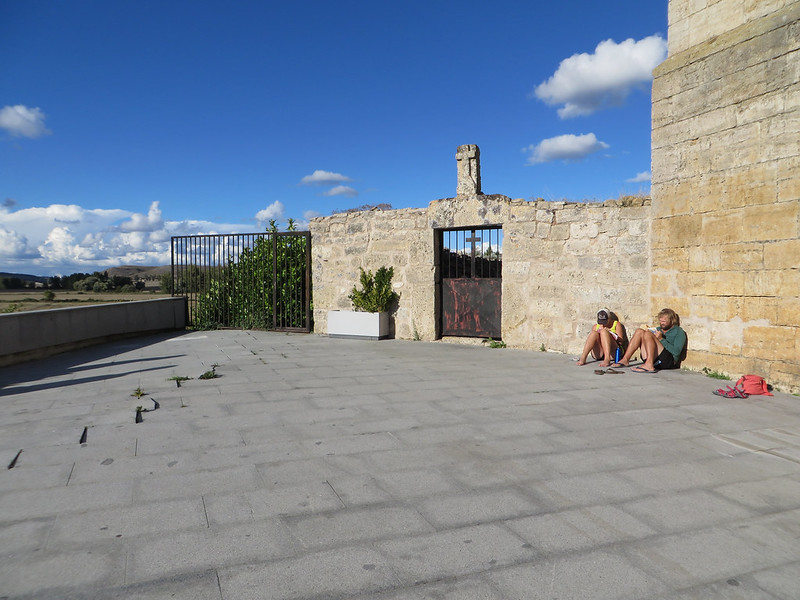 This morning in Burgos, the hospitalero startled me out of an exhausted sleep as he barked at me to get up and get going while he poked the bottom of my feet. I was the only one left in the dorm laying face down on my top bunk fully clothed, even in my rain gear.

I finally finished drying my clothes at around 6:00 a.m. after getting some change from another pilgrim. He was happy to give it to me without expecting me to pay him back. He said he would see me at some point along the way; however, I know that can never be guaranteed. When I saw him ordering breakfast at the bar across the street I insisted on paying the bill before he had a chance to. We laughed about it and hugged.

Andrew smiled as he witnessed the exchange. After breakfast, he and I, and the Bavarian couple we socialized with last night, explored the Gothic cathedral before we walked.

I could feel the heaviness of God and the Catholic history as I walked under the high domed ceilings, through arched passageways and along corridors depicting religious scenes carved into the walls. 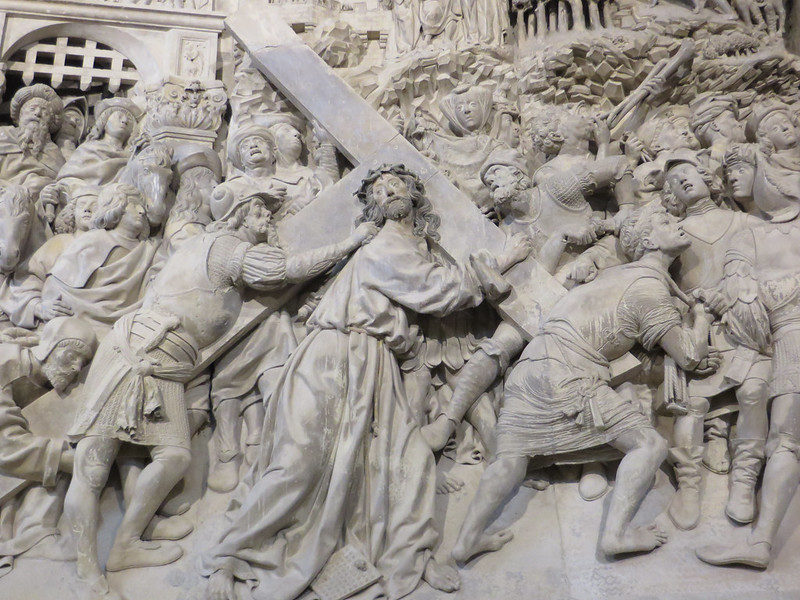 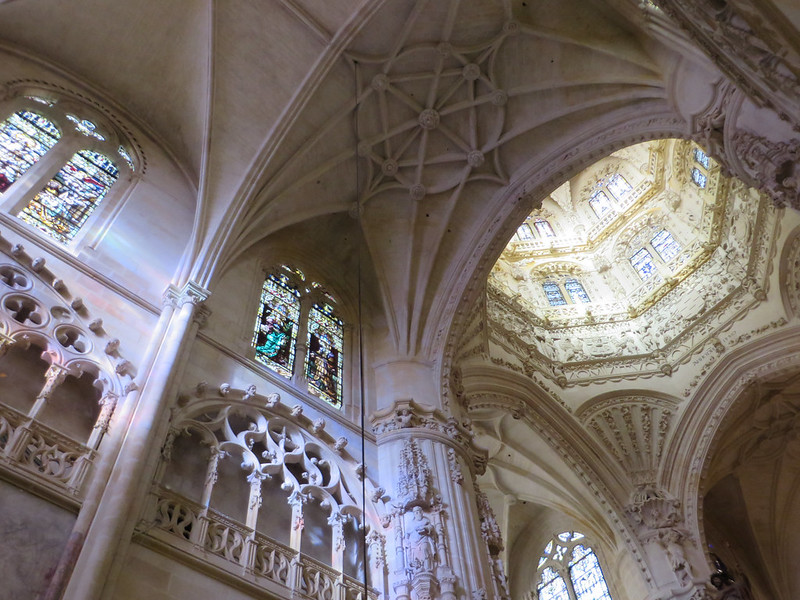 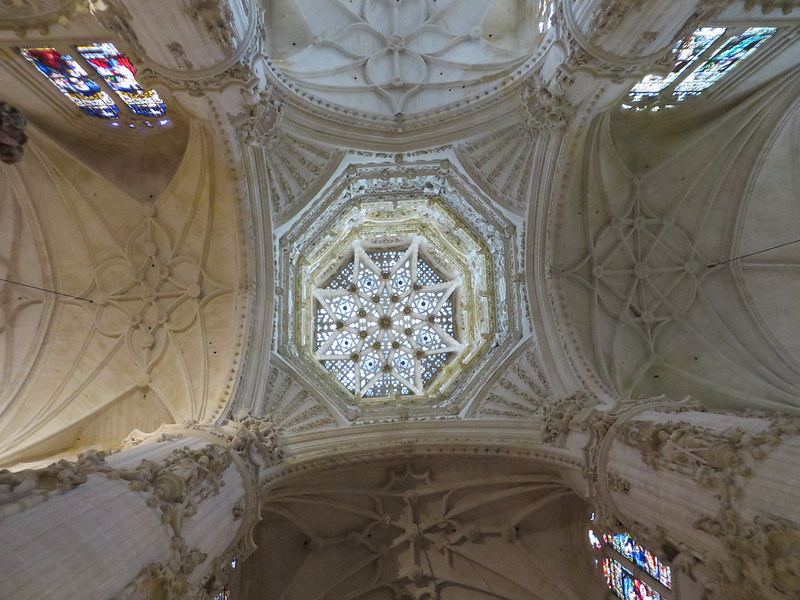 In the centre of the cathedral was a chapel – one of many scattered throughout this enormous house of God. 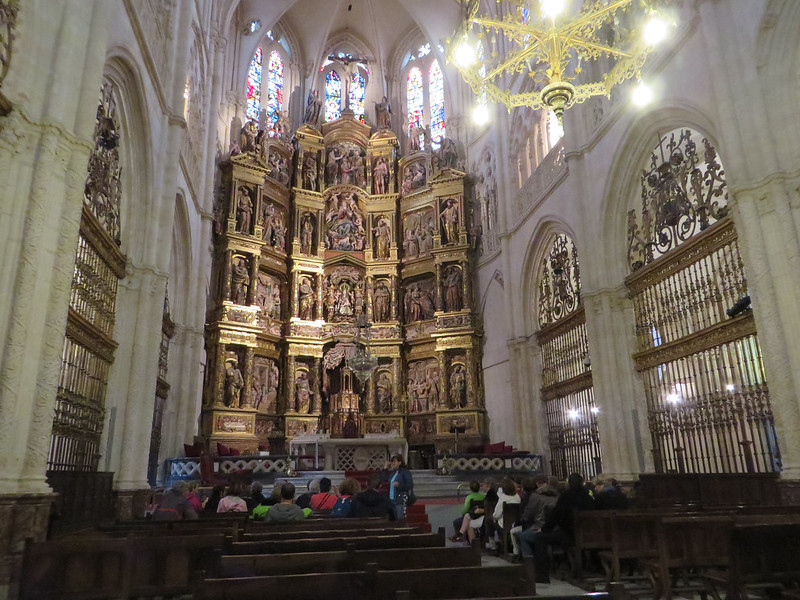 Andrew sat in one of the pews. I noticed that he traced the sign of the cross on his body before he sat down. It’s something I respect and feel like I should do here, but because I didn’t grow up with religion it feels foreign to me. 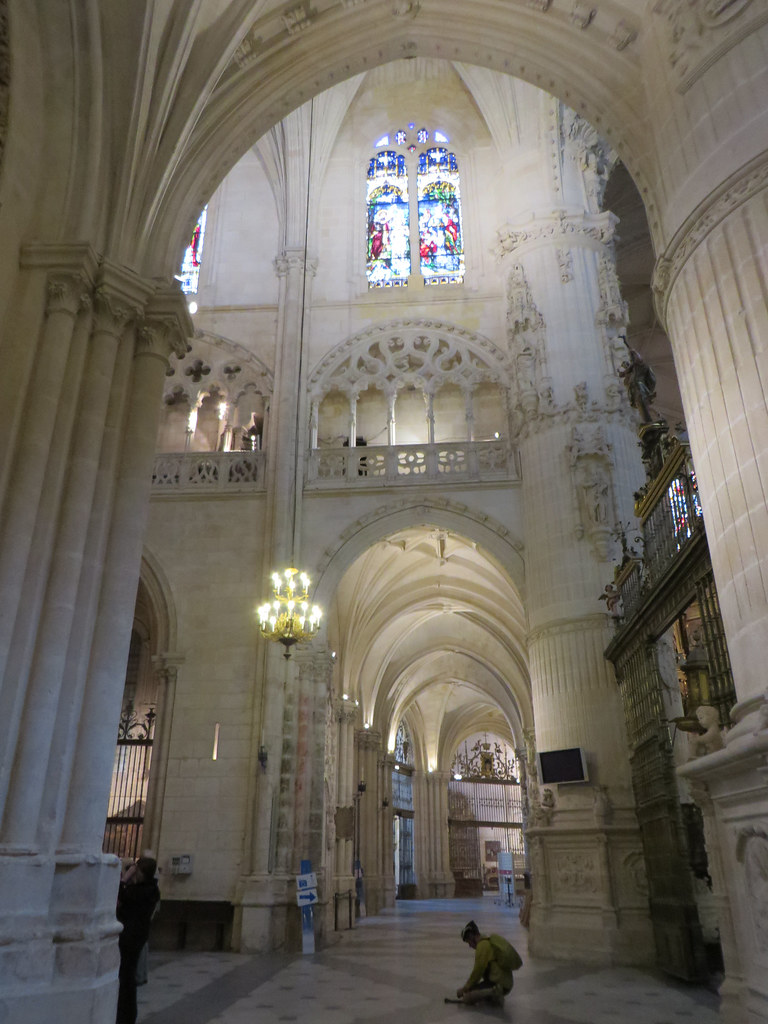 Andrew and I began walking together out of Burgos, but separated as we each dealt with body aches and pains. Andrew’s blisters were still bothering him plus he is developing a sore knee and I was beginning to realize that the pain developing in my left shin could be a bigger problem than I first thought. 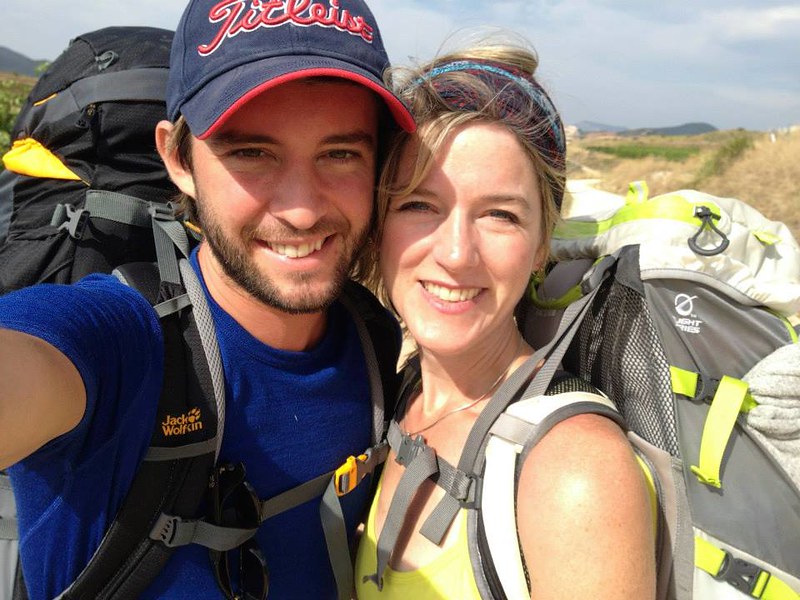 We took a break under a highway overpass and ate some fruit, but Andrew seemed off. He said I would probably not want to be around him today, that he was “pissed off”. So, I stood up and, without saying a word, put my hand on his back and then continued walking. I understood. It was time. He had his own work to do and, in my mind, whether I’m right about it or not, we had already gone over this and there was no sense in questioning it.

We stopped for lunch in Tarjados after purchasing some Arnica gel from the farmacia. The gel is supposed to help with inflammation although I have my doubts about its effectiveness. As we sat eating lunch I began feeling off too realizing that my shin splint could possibly affect the rest of my journey.

Andrew tried to lift my spirits. He made me laugh with one of his funny translations and then stood up and strapped his pack on. He told me he would see me up ahead although I knew I wouldn’t. He turned and I watched him walk away, my Camino buddy with his blisters to bear, until he disappeared around the bend on the long road to Santiago. 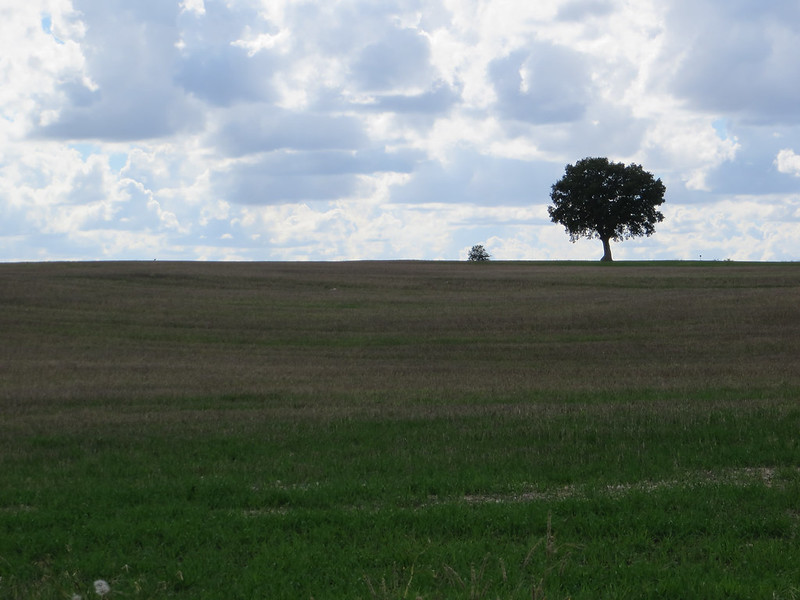 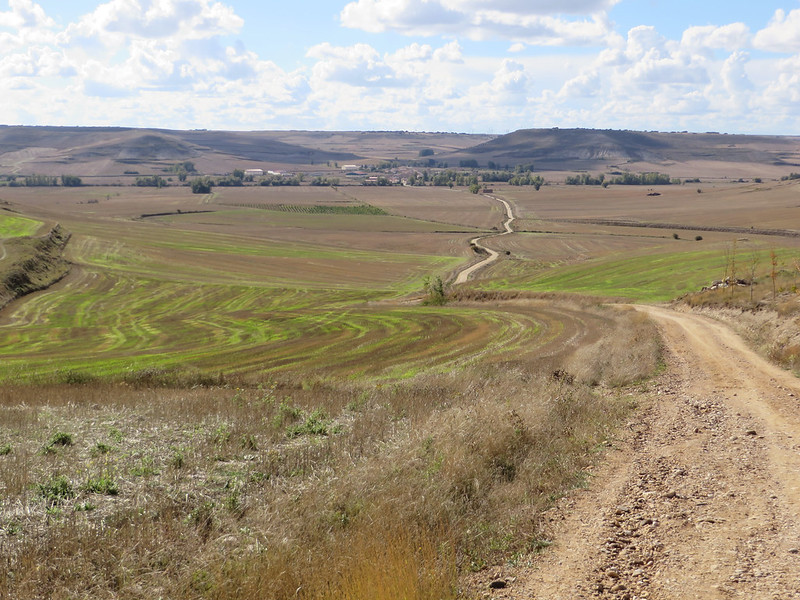 It took forever to get here with my limp. I passed one albergue with a ‘no vacancy’ sign hanging on the door and then another – same thing. They were both full.

I took my pack off, sat down on the sidewalk and laughed at my seemingly hopeless situation. Before long my laugh turned into a sob. Again, I let the tears come. It seemed like the beginnings of another tough Camino moment.

I knew I wasn’t going to make it to the next town another five kilometres away. It would be dark by the time I got there in the state my leg was in. I imagined myself sleeping in a field or breaking into someone’s shed. I wasn’t going to let that happen, so I got up and kept walking. 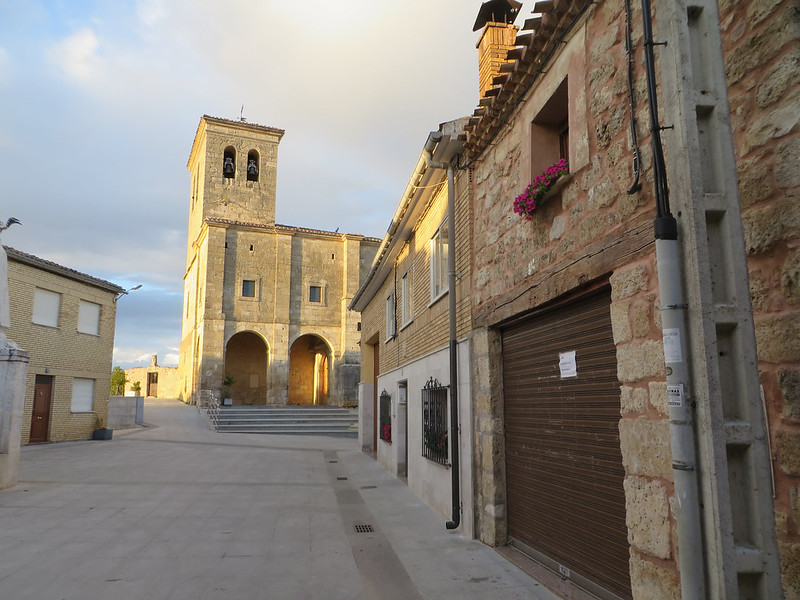 Thankfully, I found a third albergue. The hospitalera, sensing my desperation as I stood before her, smiled at me, reached out and embraced me in a warm hug. There was space. She took me to a dorm where I selected a lower bunk at the back of the room and gladly dropped my pack for the night.

As I rest on the patio against this stone wall, the farmland is bathed in a warm glow as the evening sun prepares to nestle into a bed of distant hills. 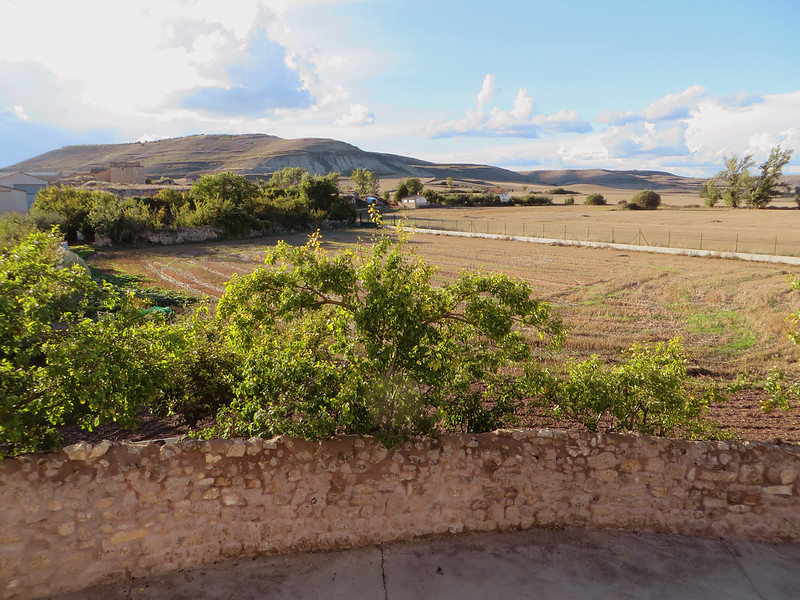 A couple of pilgrims from Tennessee and New Zealand gave me some anti-inflammatory meds for my leg. I sure hope it works. For a while I will walk shorter distances – 20 to 25 kilometre days instead of the over 30 kilometre distances I have been walking.

Now that I’m a day ahead of my schedule, I should take it easy otherwise I’m just going to wear myself out and lessen my chances of making it to Santiago – a scary thought!