I’m going to be so tired tomorrow, or more like today now. It’s 3:00 a.m. as I sit here journaling in the main floor sitting area of this huge six-floor albergue. It hasn’t been easy to sleep and this time it’s not because of the snoring.

Today, was a very long walking day and I’m physically beat. It was 7:15 a.m. when I left Villafranca Montes de Oca in the dark with my headlamp on.

As I climbed into the hills through an oak forest, the canopy opened up and I could see Orion’s Belt sparkling through broken cloud – a beautiful sight. The moon, only a silver sliver, hung in the dark sky and frogs croaked from within the dark woodlands around me.

Someone was silhouetted by their headlamp up ahead. I didn’t know who it was other than likely another pilgrim. Many leave while it is still dark. That way you get to your destination early to secure a spot in one of the better quality albergues before they fill up.

The rising sun unveiled the landscape around me and I saw that it was one of the three Frenchmen up ahead that I always seem to run into. The other two were up ahead as well. They are friendly and funny although I have no clue what they are saying. The black Frenchman knows a little English – not much, but he always tries to communicate with the little he knows.

The other Frenchmen are always smiling, laughing and chattering away to me in French while using hand motions in hopes that I will understand them. One of them shared his chocolate-almond bar with me – so delicious! I made a mental note to pick one up the next time I hit a supermarket. 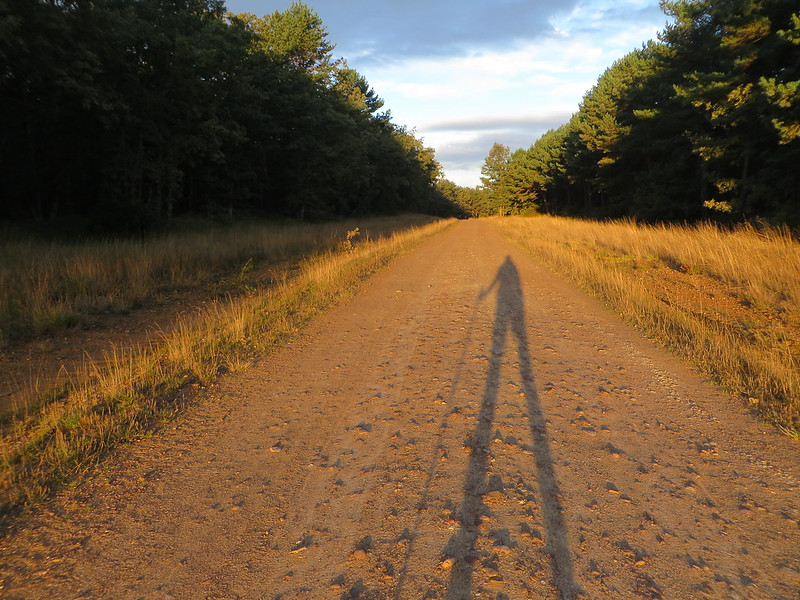 One thing I observed while I was walking is that when you push yourself beyond your comfort zone that’s when those emotional releases happen, like on my first day.

I also made up a song. First, I came up with a tune and then added some lyrics. My walking sticks were like a metronome as they clicked the pavement creating a steady beat for my Camino melody.

Lost in my zone, I marched alongside roads and paths, through towns and over hills humming and singing my tune. 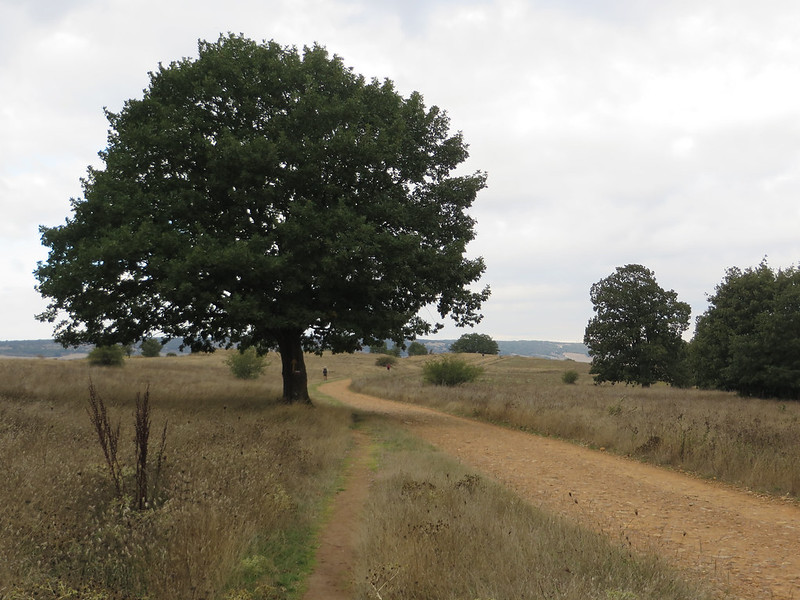 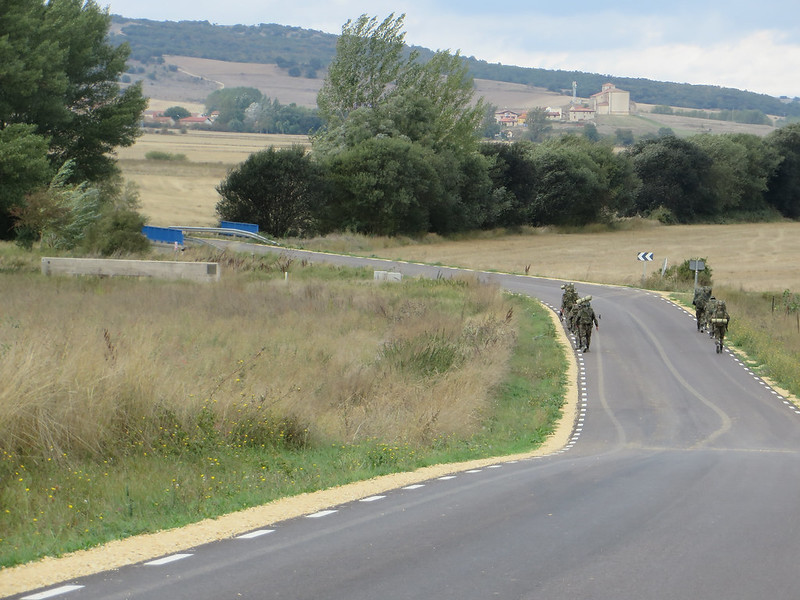 Because I started early, I walked a long way early in the day. I caught up to the three Frenchmen again. The black Frenchman asked where I was headed to. I didn’t know at that point. They were headed to Burgos. I calculated that from Villafranca Montes de Oca it would be 33 kilometres, which I later realized was an inaccurate prediction. 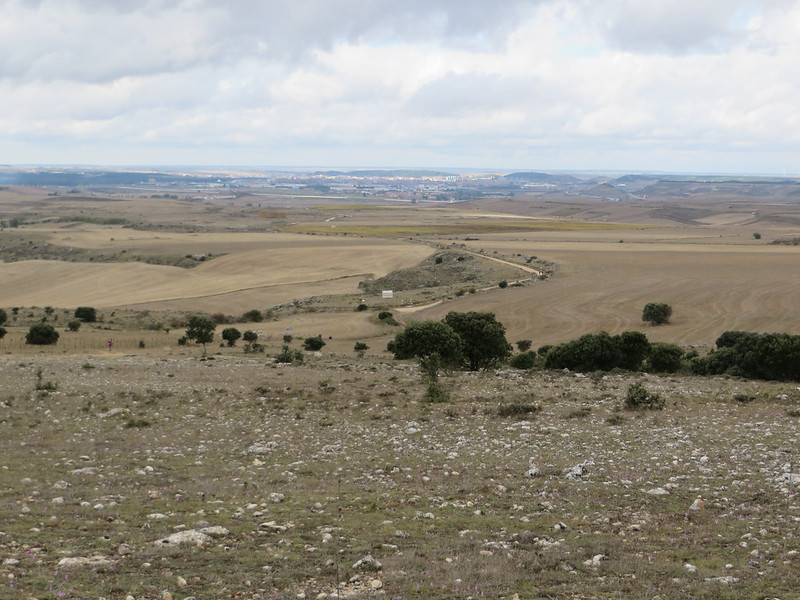 When I saw the city from a hill-top I decided to go for it. I would be a day ahead of schedule, but I could always stay an extra day somewhere or I could go to Finisterre.

The industrial area on the outskirts of Burgos was a long stretch of pavement. 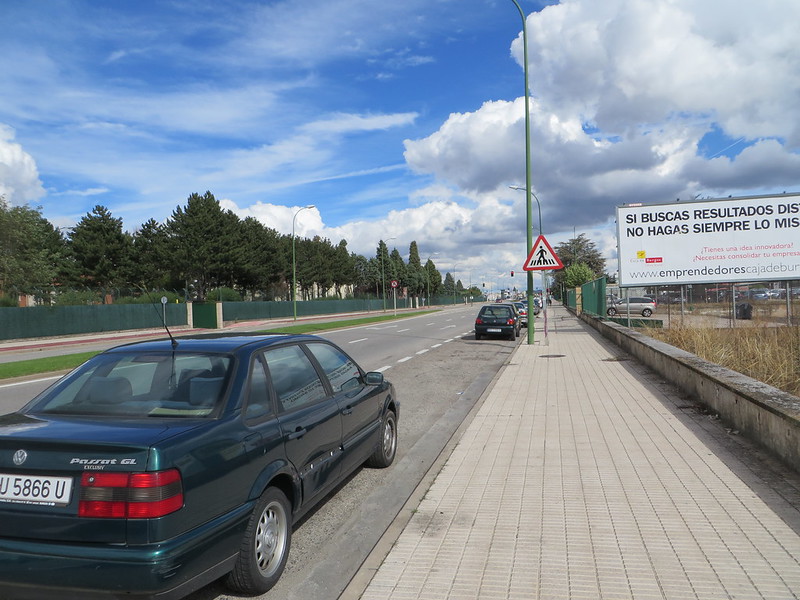 I heard that some pilgrims take the bus through this part, but I didn’t want to do that. In my mind, I would only be cheating myself. No matter how ugly or difficult some sections of the Camino were I was going to walk through them. And besides, I was curious to see just how bad it was and why pilgrims sometimes bypass it.

It seemed never-ending. I couldn’t believe how many blocks the Bridgestone factory alone carried on. It must have been for at least a kilometre. This section of the Camino was just a lot of straight, flat concrete littered with factories and big box stores.

The occasional rig would pass, horn honking, and through the windshield I could see the driver smiling and waving. Many of the locals are very proud of their famous pilgrimage route and very supportive of pilgrims’ efforts. The common greeting along the way from both locals and pilgrims is “Buen Camino”, which means “Have a good walk.”

On my second day out of Roncesvalles, I remember the emotion in an old Spanish man’s eyes. He took one of my hands in both of his, kissed my cheek and wished me buen camino. The Camino obviously meant a great deal to him and I wondered if he had walked it at some point in his life.

Once I passed the industrial area it was a long way before I finally reached my destination. The pavement kept going like a never ending roll of red carpet. 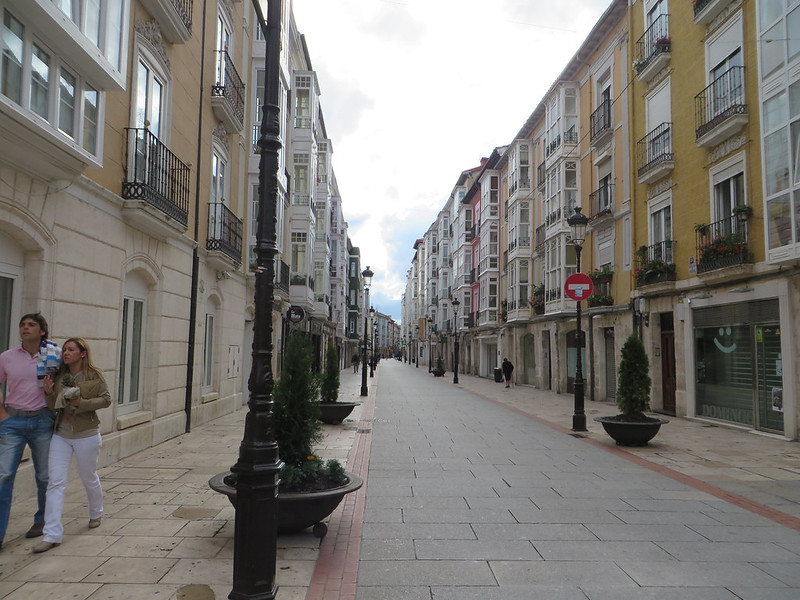 One that eventually led to the most beautiful cathedral I have ever seen. It was difficult to take my eyes off it. 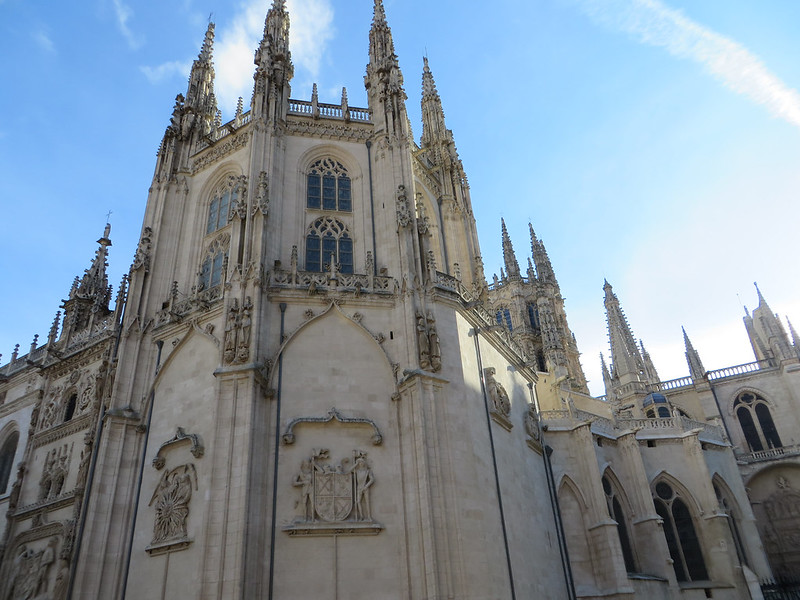 The architecture was Gothic style. 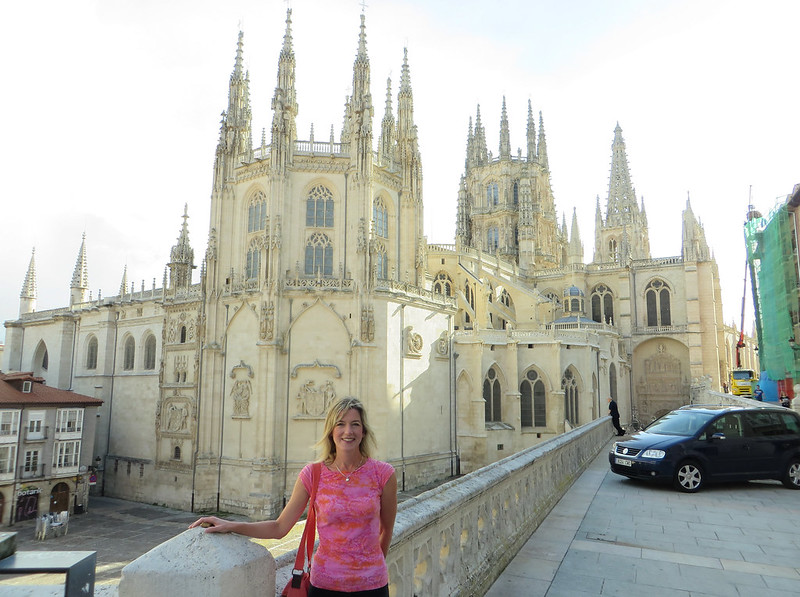 A pilgrim stopped and pointed me towards the albergue which I had walked passed while gaping in awe at the cathedral’s intricate detail. It was located directly across the street.

I was delighted to see the three Frenchmen again. As usual we greeted each other and celebrated our arrival with charades and woo hoo’s!

Then a familiar voice called my name, but I couldn’t see where it originated from. It yelled to look up. It was Andrew hanging out the window of the albergue calling out to me in his German accent, “I can’t believe it! You made it! You’re crazy!”

He came downstairs and gave me a hug. He told me he had walked 40 kilometres the previous day, but his feet suffered, so he called it a short day today. He was searching for new walking shoes again and was on his way out to find an outdoor store.

Xavier from Australia is also staying at this albergue. He is the one I shared the taxi with from Biaritz to St. Jean Pied de Port. We caught up over a beer on a balcony. Andrew motioned through the glass that he had found some shoes. Thumbs up for him! I sure hope he has more success with these ones.

Later on, I joined Andrew, and the lively group he had met along the way, for dinner and a beer in the bustling plaza. 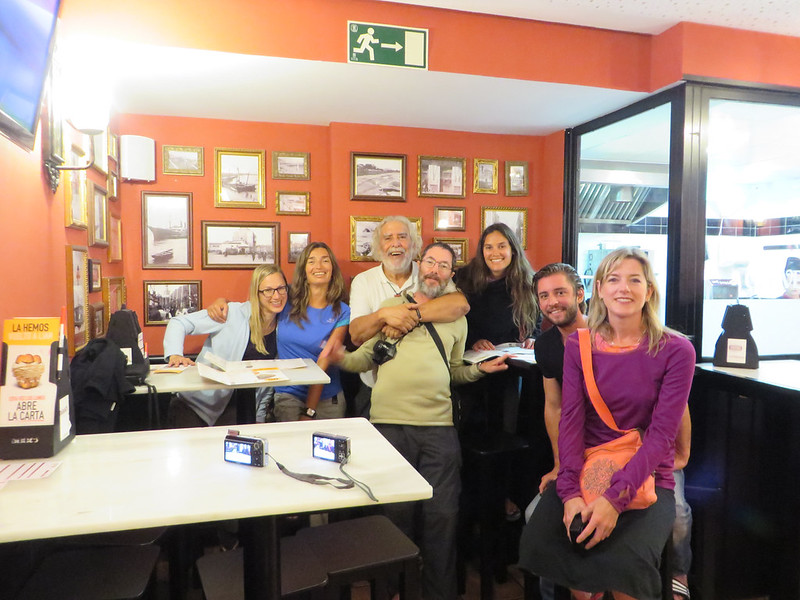 On the way back we stopped for another beer at the bar across from the albergue. We sat at an outside table with a German Bavarian couple who had also walked all the way from Villafranca Montes de Oca today. Because of how big Burgos is, we determined we had actually walked 40 kilometres, not 33 kilometres like I had originally thought.

Soon we were summoned by the hospitalero who was standing at the door looking at his watch and beckoning for us to hurry up and come in. He was locking up the albergue for the night. We brought our beers with us and the four of us hung out in the main floor sitting area where I’m journaling right now. Eventually we were told to quieten down and go to bed.

This brings me to now, 3:00 a.m. and unable to sleep again. Normally, I do not suffer from insomnia, but when I climbed onto my top bunk and laid there in my clothes with no sleeping bag and no blanket, sleep just wouldn’t come.

This albergue doesn’t supply blankets. And, to make matters worse one of the windows in the dorm is open. I swear this city doesn’t sleep. I can’t blame the people. I didn’t want to come up here and go to bed either, but I had to obey the hospitalero.

I tried to ignore the noise outside, but when you’re cold and missing the security that top layer, even if it is just a sheet, it makes it doubly hard to nod off.

Instead of fighting the insomnia any longer, I decided it would be a good time to do laundry. There would be no line-up and I thought that I may as well be productive.

As quietly as I could, I climbed down the bunk ladder and retrieved the bag of clothes from my pack. I cringed as the elevator made a loud dinging noise and then again when the door slid open shining bright light onto the sleeping pilgrims nestled in their warm sleeping bags.

Now, my clothes are in the washer and I’m sitting here wearing only my long johns and my yellow tank. I’m cold, but I need to wash my warm things because they really stink. At least the things I’m wearing now I had washed just yesterday. They didn’t quite dry all the way last night, so I had to tie them onto my pack. 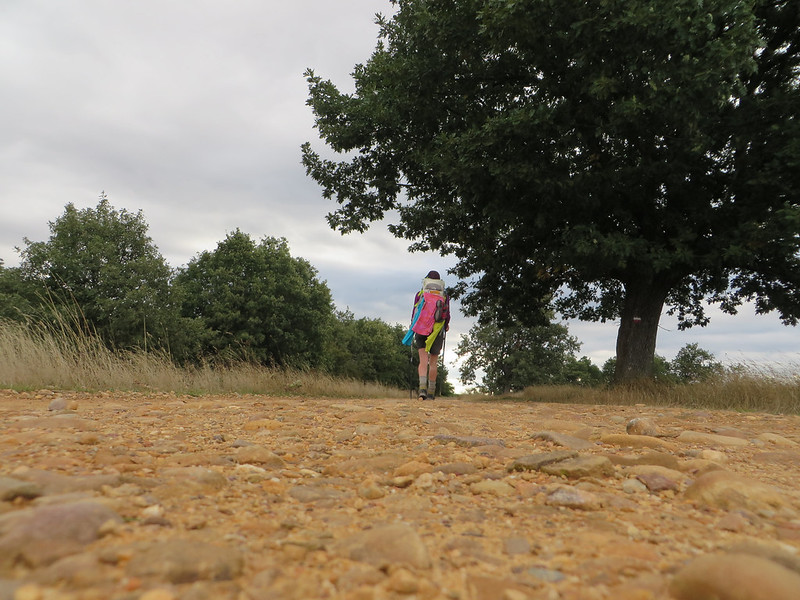 Today, I was a walking human clothes line. It was a funny sight, but regardless of how it looked my clothes needed to dry otherwise they’d just get sour in my pack.

My only issue now is drying the clothes that are currently in the washer. I don’t quite have enough change. Double crappy! Brrrr…