The comforting aroma of cedar and the warmly-lit ambience of the Coastal Bliss Yoga studio reminded me of the Pan-Abode log house I lived in for ten years and of the days when I relied on the natural heat of a wood-burning stove. 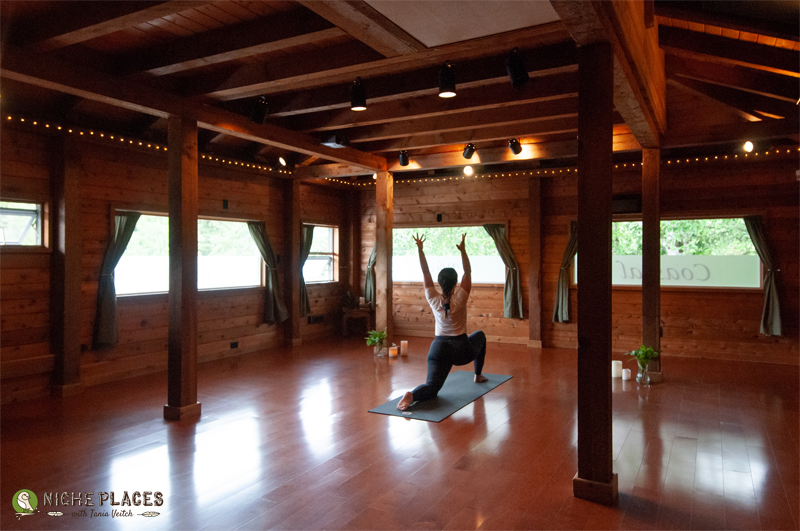 There was no stove here, but interestingly enough this studio used to be an apartment. I would sooo live here!

A few candles flickered beside vases full of cedar boughs and salal branches, typical west coast foliage found here in Tofino. Pin lights around the perimeter of the room cast a subtle warm glow. It all created such a peaceful and comforting atmosphere. 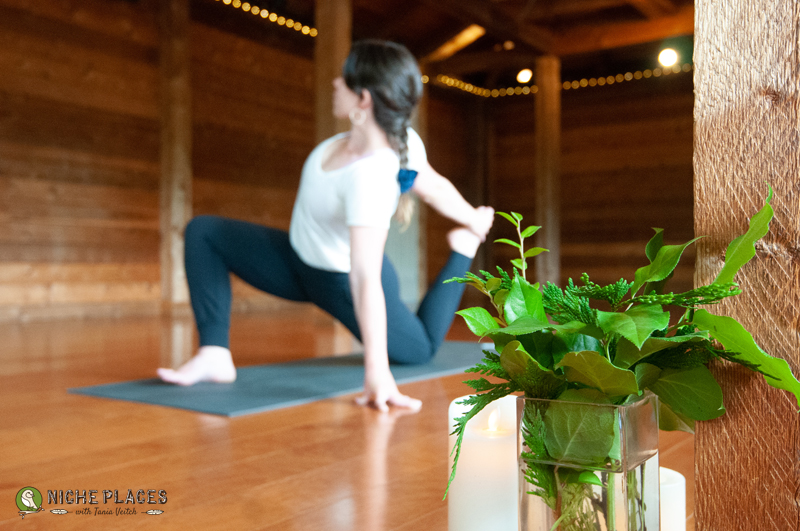 I was here for a 90-minute Vinyasa Flow class. It was a summer cooling class to help off-set the heat and energy present at this time of the year. Jacky, who has taught here at Coastal Bliss Yoga since 2013, described the class as connecting with the natural elements of summer and water here in Tofino.

The class was very well attended by a combination of locals and vacationers. We shuffled our mats around a couple of times to accommodate for late-comers. We were a full house but it didn’t take away from the ambiance in the room. With mats staggered it was still easy to flow through poses without bumping your neighbour.

Fresh ocean air gently wafted in through open windows. Throughout Jacky’s class, her soothing voice guided and encouraged. She slowly made her way around the room giving gentle instructions and reminders to relax any tense muscles. I immediately unclenched my teeth, a subconscious habit that I’ve developed over the years.

We practiced deep breathing techniques using humming and the sound of Om. These vibrational sounds, I learned recently, are good for toning the vagus nerve which is critical to our parasympathetic system and ability to handle stress.

We flowed between standing poses, lunges, forward bends, and various floor poses using the breath as a guide. My mind became meditative. I felt an inner calm as my breath became one with my mind and body movements. I was overjoyed when we did my favourite floor pose, Pigeon, and when we relaxed into Child at times. It always feels so nurturing. 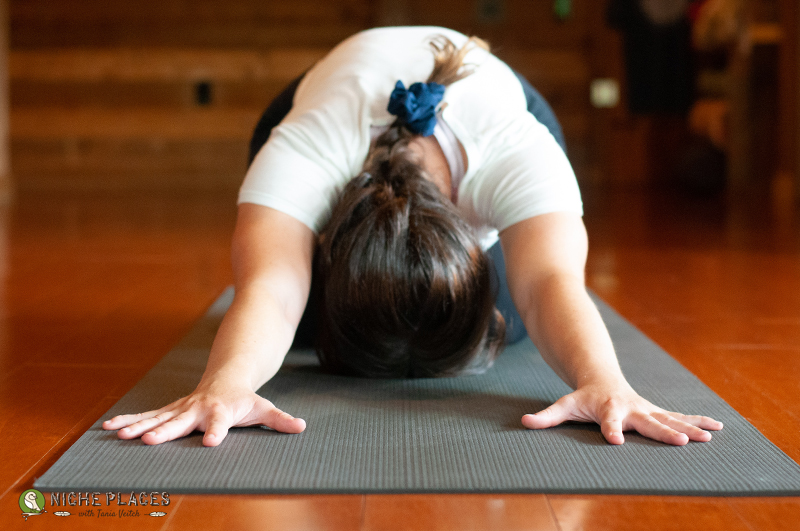 It felt great to be back in a yoga class. Yoga used to be a regular practice for me in the winter and something suggested by my naturopath at the time. I had been functioning in a constant sympathetic state. Not knowing when to take a break was one of the biggest challenges I faced, and still do sometimes, as a freelancer. Yoga helped me to balance work and life and to handle life’s stresses in a healthier way.

Jacky is the owner and manager of Coastal Bliss Yoga studio. 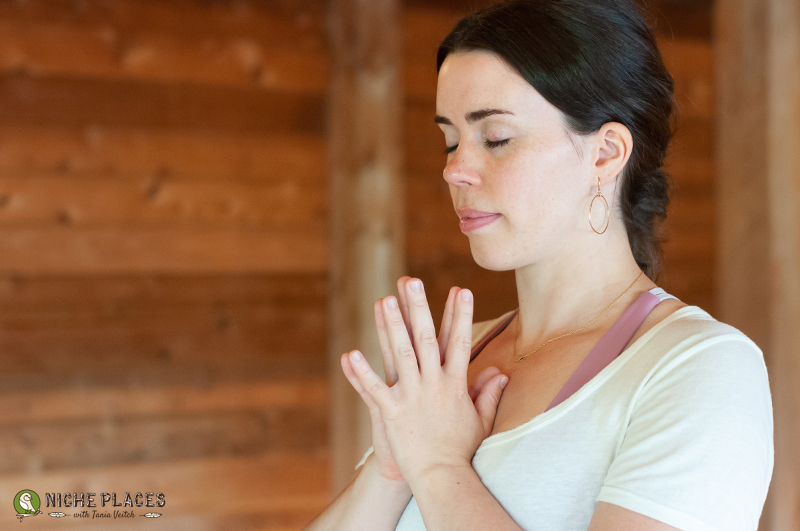 She first began practicing yoga over a decade ago while attending OCAD University in Toronto, Ontario. She was curious if yoga and mediation could help balance the high stress levels of being a university student. 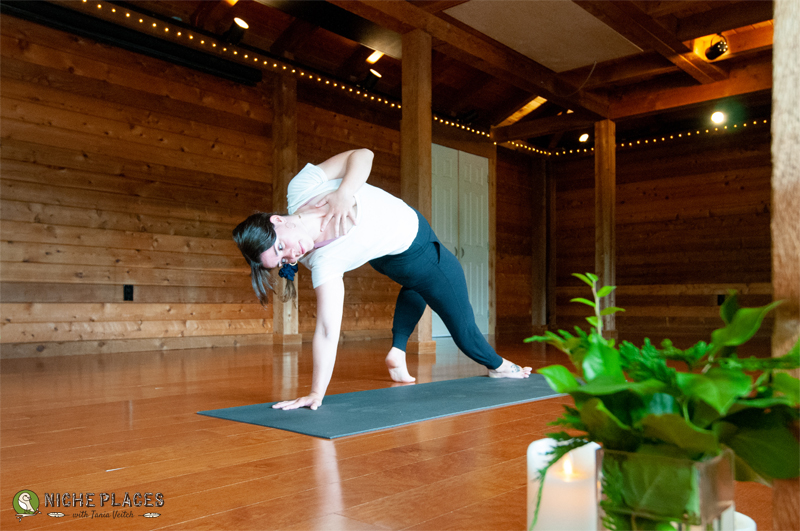 Jacky eventually moved to Tofino where she practiced under teacher, Natalie Rousseau.  Natalie was one of the lead teachers and the manager of Coastal Bliss Yoga at the time. Natalie began practicing in the late 90’s and teaching in 2002. Her background is rooted in the Ashtanga, Anusara and Vinyasa Yoga traditions. 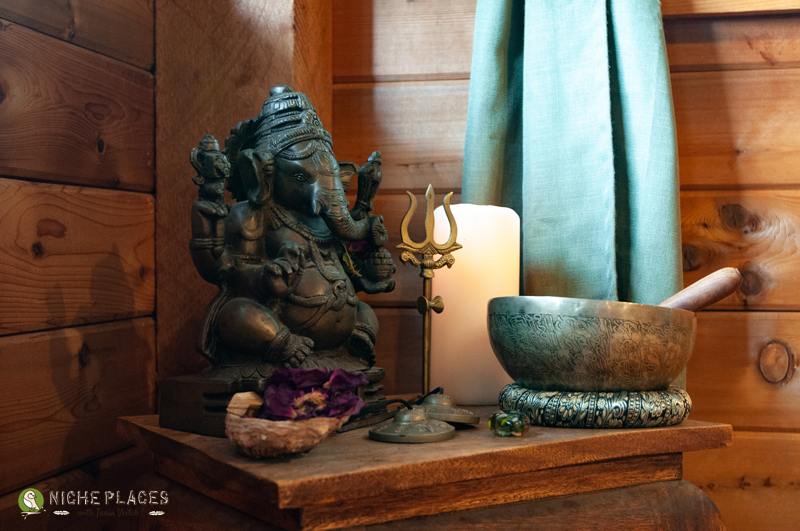 When Jacky learned that Natalie was offering a Teacher Training Program in Victoria, BC, she immediately enrolled. She was inspired to take her practice to the next level and share her passion for yoga with others.

In 2013, following Jacky’s teacher training, she began teaching classes at Coastal Bliss Yoga. She also quickly took on the role of assistant manager. 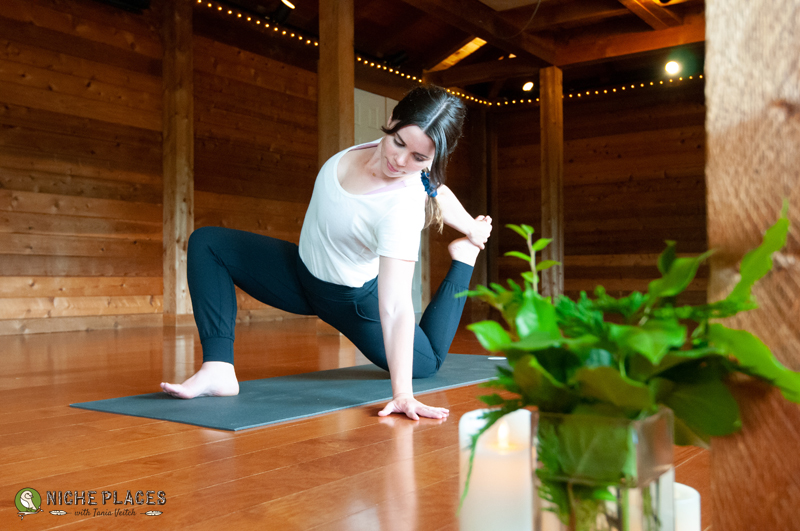 Pascale Froment, the previous owner of Coastal Bliss Yoga, became Jacky’s business mentor and, after starting a family in 2016, asked Jacky if she would like to purchase the business. Pascale still lives in Tofino and practices at Coastal Bliss Yoga often! She is co-owner of Live To Surf (Tofino’s Original Surf Shop) which was opened by her family in 1984.

Coastal Bliss Yoga opened in 2010. Currently, they have twelve registered yoga teachers, who all have a minimum of 200 hours of yoga teacher training. Most have 500+ hours of training and have been teaching for between five and fifteen years. 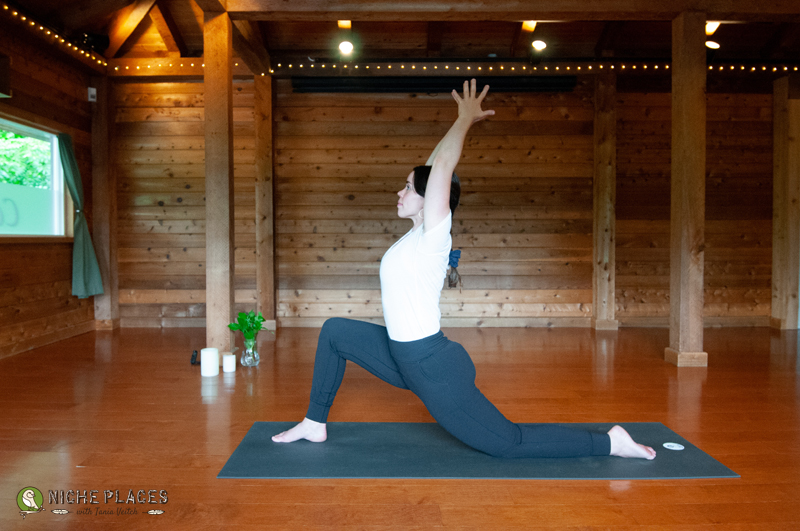 The classes at Coastal Bliss Yoga run several times per day in the summer, so if you’re on vacation in Tofino, you don’t need to worry about interrupting your yoga practice. Just drop in! There are plenty of mats, bolsters, cushions and blocks to use.

Please note that the Beach Yoga Program, which is run in partnership with Tofino Paddle Surf at Mackenzie Beach during the summer months, is not currently being offered. They will start up again in July, 2020.

The yoga schedule is consistent all year long. The busiest time in the studio is fall, especially in November during the bi-annual 30-Day Yoga Challenge. 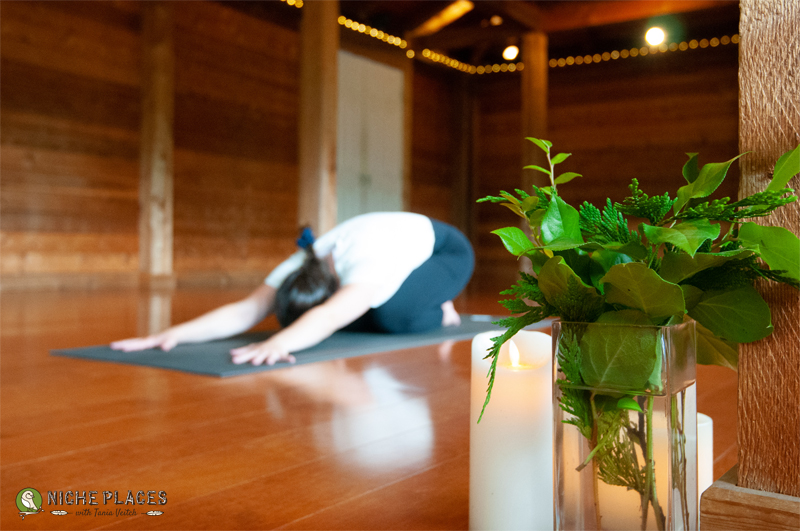 Should you feel inspired to add to your yoga collection you can also check out their small studio shop! 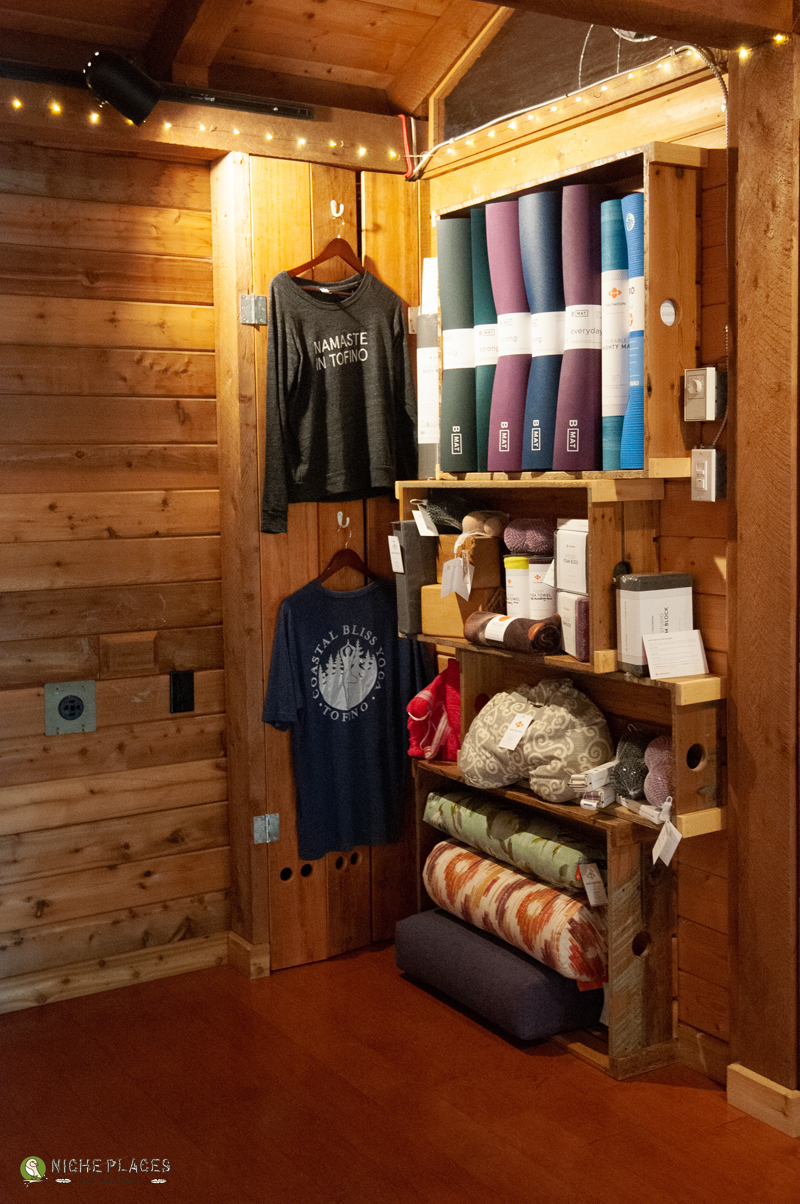 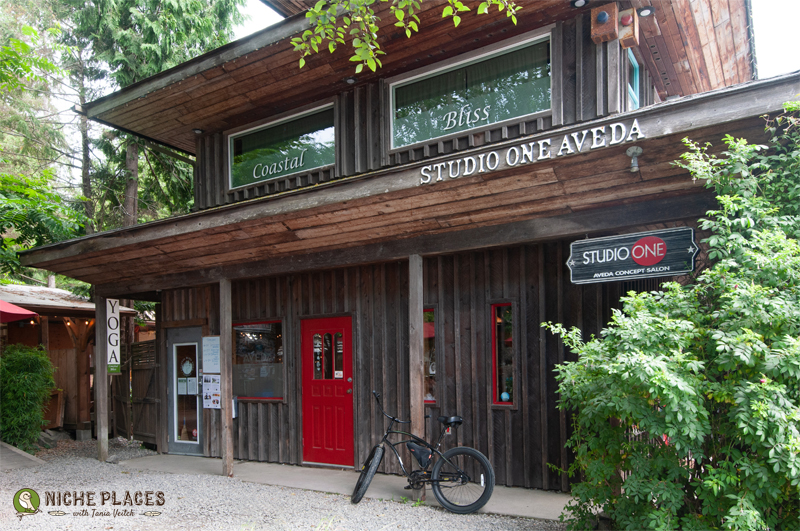 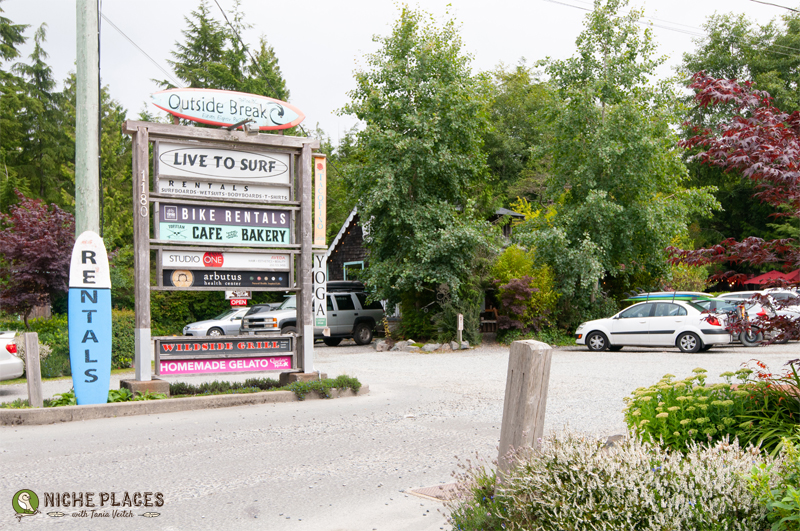