Two years ago, me and a friend did a kayak tour with Black Bear Kayak in Tofino. Our experience with them made a lasting impression on both of us so I was excited, upon arriving in Tofino for the summer, to go on another adventure!

Back then, my friend and I had chosen the Meares Island 4-Hour Kayak Tour over the Bears By Kayak trip partly to experience the diverse and lush old-growth forest containing some of the oldest red cedars in British Columbia, but also because my friend, having never encountered a bear in the wild before, was understandably a little nervous about it.

This time around, I chose Bears By Kayak and discovered that experiencing bears in this way is actually very pleasant and safe.

Essentially, Black Bear Kayak’s Mothership Tours are like a moving “base camp” in hiking terms, only the mothership drops you off at one location and picks you up from another. This makes sense when special nature and wildlife experiences exist in more remote locations.

Bears By Kayak is one such tour and another is the amazing Floating Gardens in Freedom Cove which is a fully sustainable, off-the-grid living environment. Apparently, the owners even fish from the living room’s removable glass-topped coffee table! Now that’s pretty cool!

Before we headed out, we were equipped with safety gear including a life jacket and skirt to cover the kayak’s opening where you sit.

Jess gave us a lesson on how to hold the paddle correctly, how to safely get in and out of the kayak, and how to bail should the kayak flip over. This is very rare to happen on one of these tours, but I appreciated that they covered all the safety bases just in case.

TJ’s guides are all certified in accordance with the Sea Kayaking Guide Alliance of British Columbia (SKGABC). They are also trained in first aid and equipped to perform rescues.

With our double kayaks secured onto TJ’s boat, we journeyed to Fortune Channel to begin our Bears by Kayak paddling adventure! 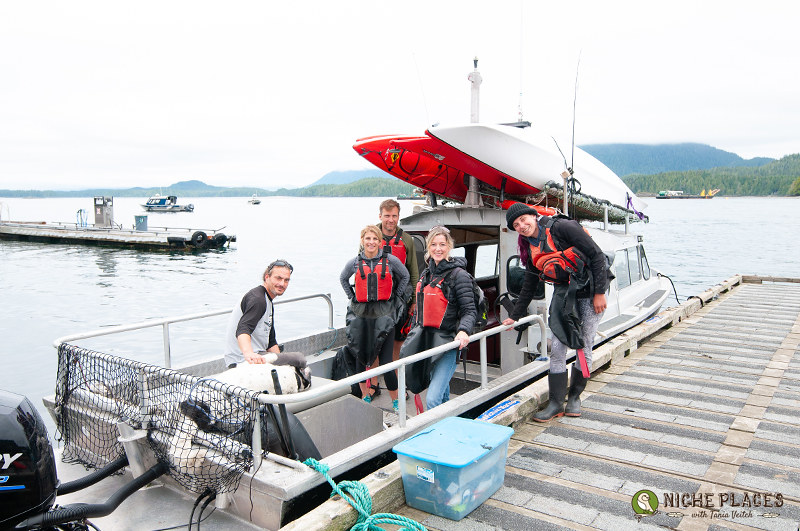 TJ, Black Bear Kayak’s founder, on the left and Jess, our guide, on the right

My paddle blades dipped into the smooth tidal waters of Fortune Channel. The tide was at its lowest point before switching gears and becoming more turbulent. A wide brim of barnacle and seaweed-covered rocks lay exposed along the shoreline.

Each low tide brings a new smorgasbord of fresh seafood. This is when bushes start to rustle and black bears emerge from the treeline. Although their eyesight and hearing are not great, black bears have an incredibly keen sense of smell at 2100 times better than ours! At low tide their noses easily sniff out shellfish and crabs hiding under rocks.

It’s neat to see black bears at work casually tossing boulders aside. It’s a visual reminder of just how powerful these animals are. 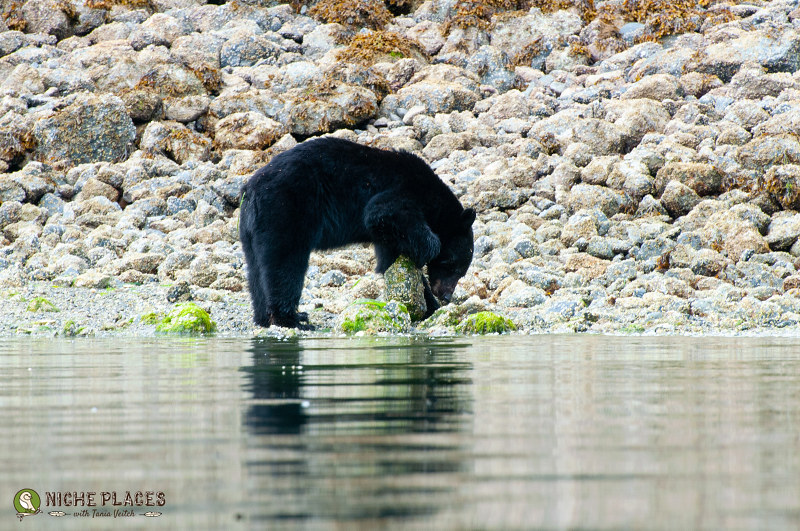 Photos were taken with a 300 mm lens 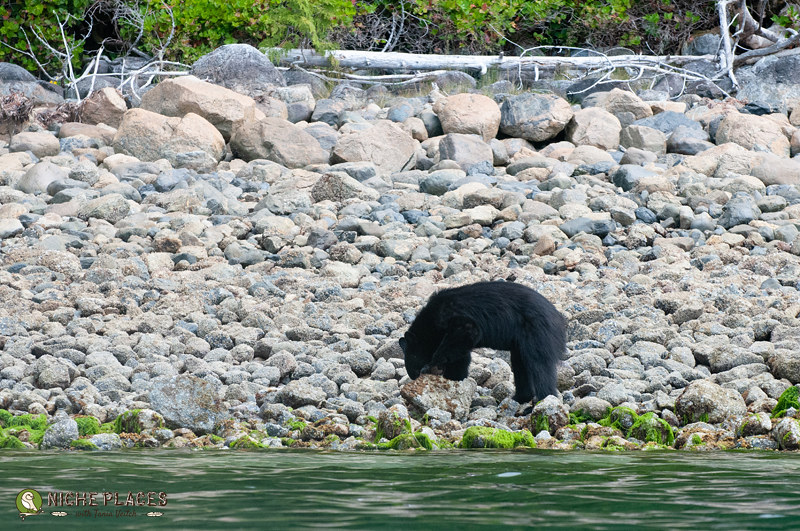 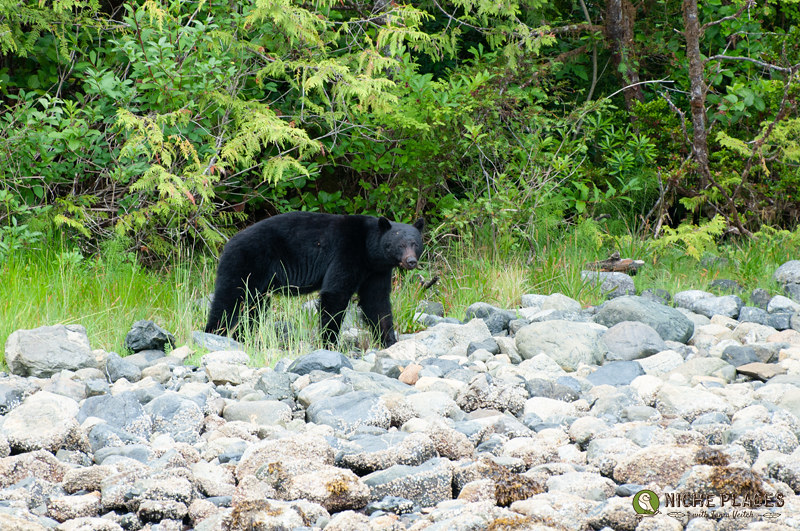 Jess was equipped with a radio so we were in the loop whenever bear sightings were reported by other vessels. While en route to Crooked Bay a reported bear sighting had us quickly diverting our course towards the far side of Big Bay. 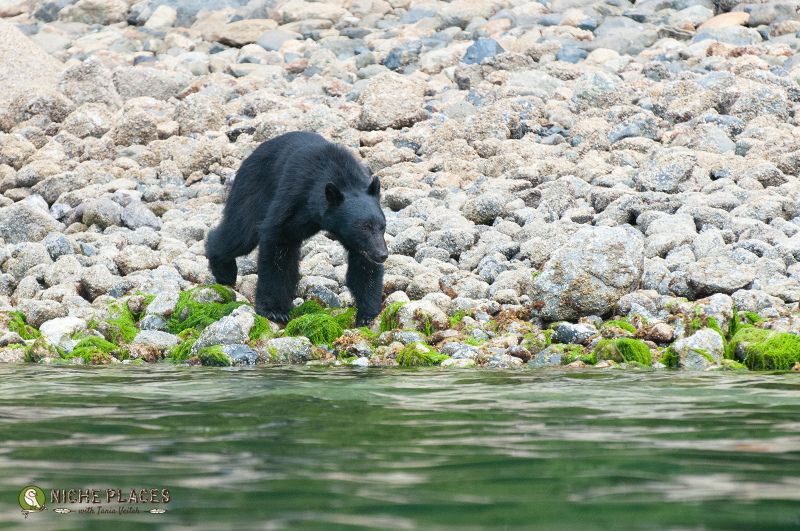 Female bears, like this one, are typically thinner than the bulkier male bears. 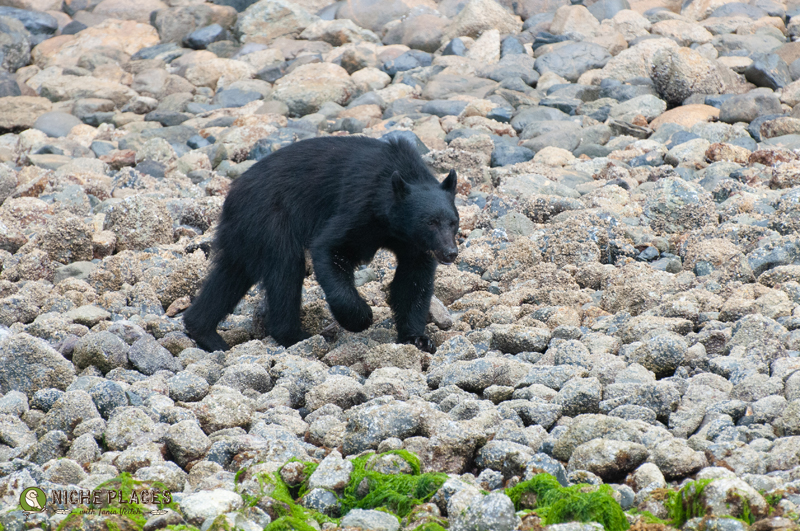 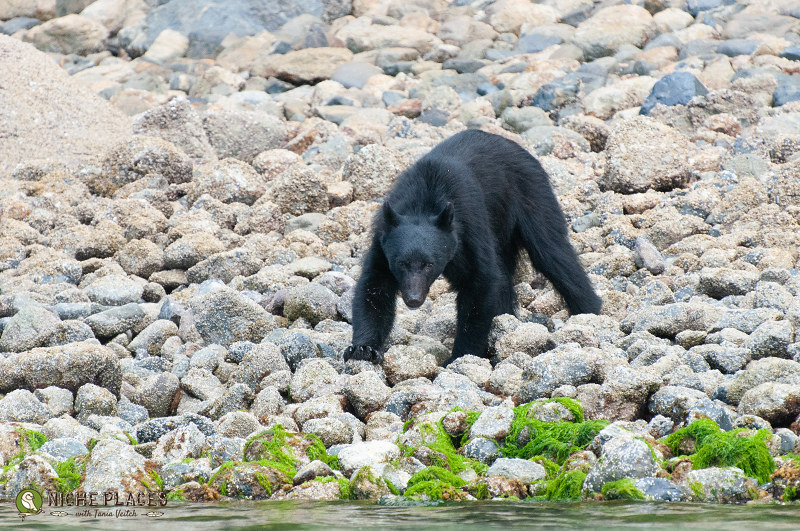 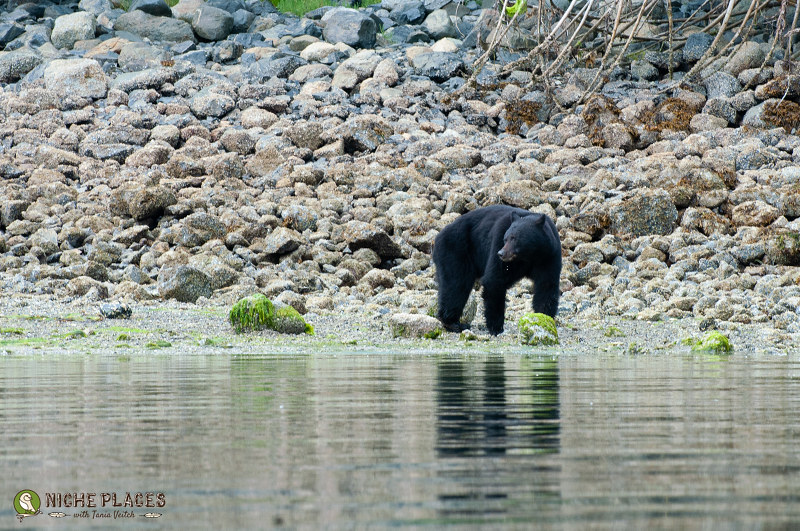 Although it’s difficult to tell in the photos below, this is a larger male bear with a wider and rounder head. 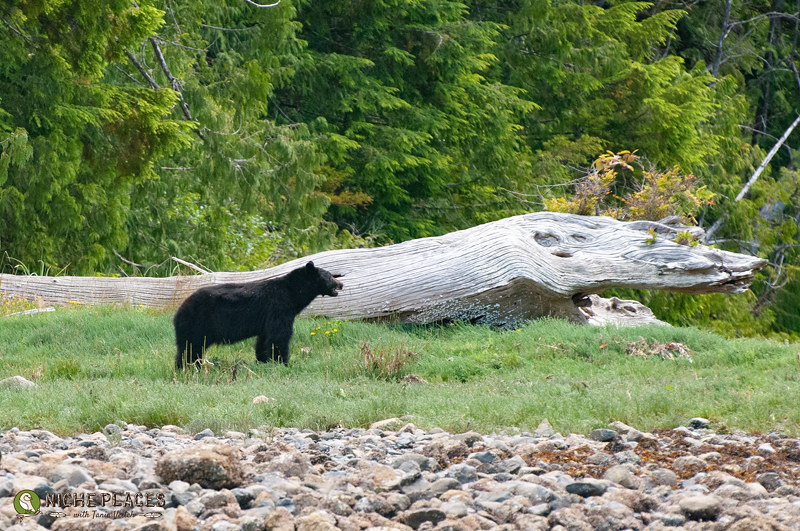 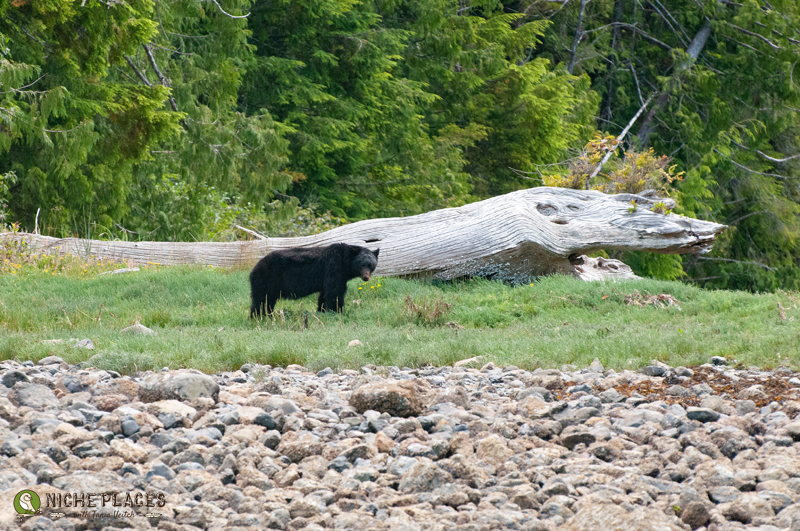 On our way to and from our paddling location in Fortune Channel, TJ always kept his eyes peeled for other wildlife and marine creatures. 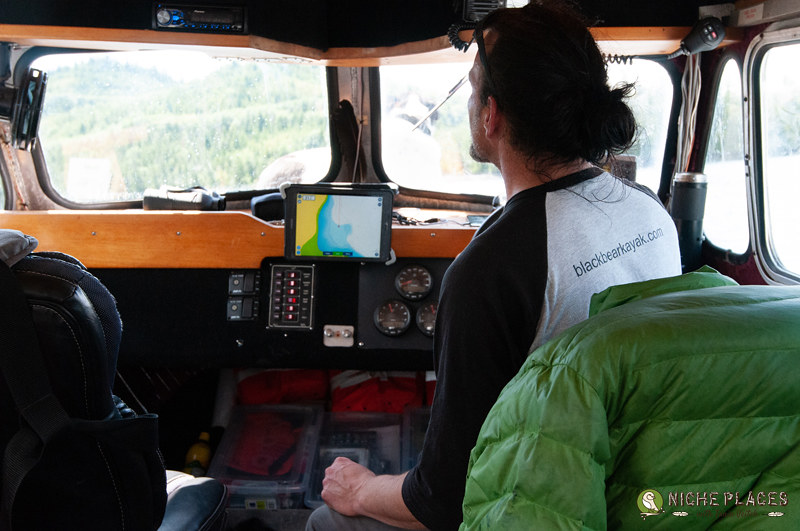 We saw loads of seals and even saw a bald eagle from a better vantage point than usual. It appeared to have blood on it’s left talon and beak from catching and devouring some unwitting creature. 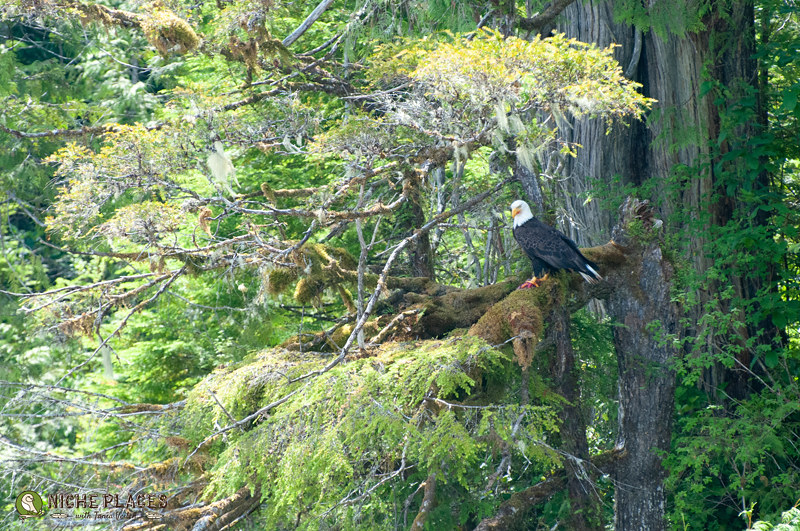 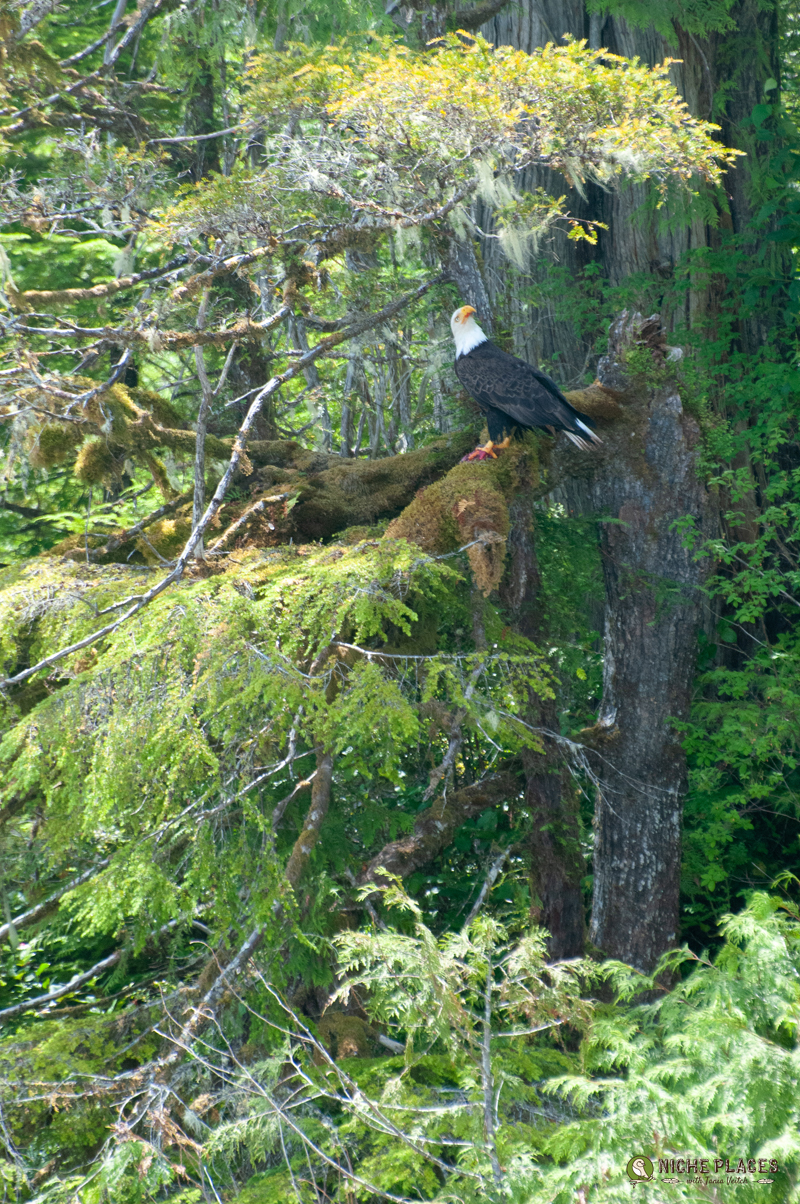 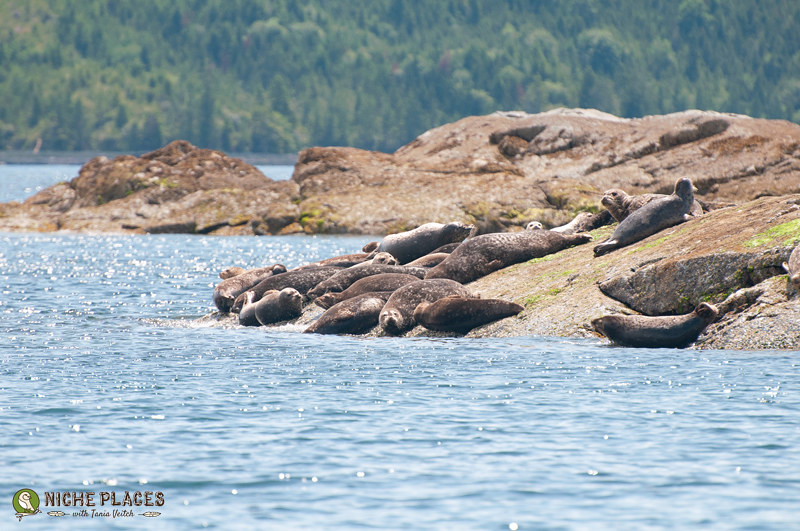 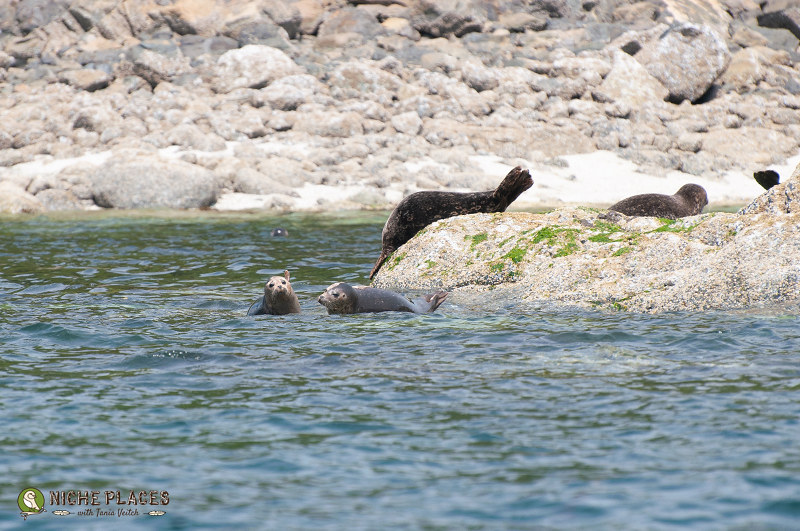 Sawyer (Boogie), TJ’s trusty canine companion, was a welcome addition to the trip. He was so calm and very comfortable manoeuvering around on the boat. 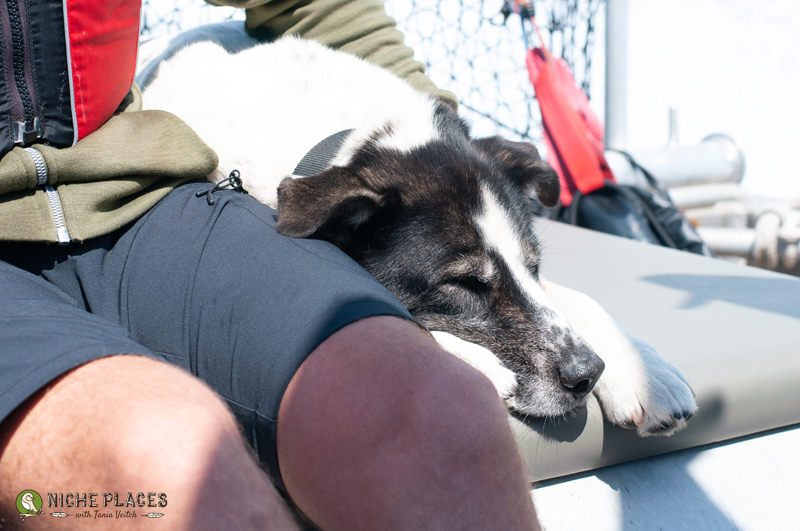 He nearly gave us a heart attack, though, when he casually hopped onto the boat ledge between the stern and bow. He walked it as gracefully as an Olympic gymnast on a balance beam only he did it while skimming across the water at high speed. He just plunked himself down on the bow, tongue hanging and face to the wind. We all breathed a sigh of relief! 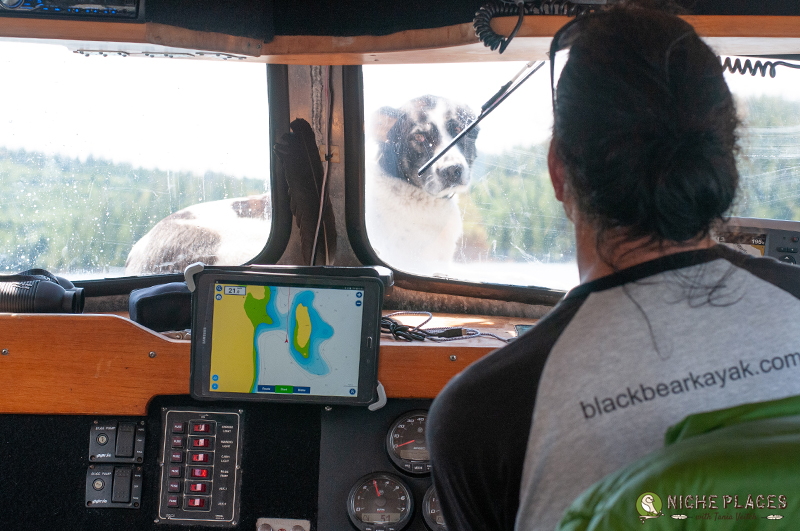 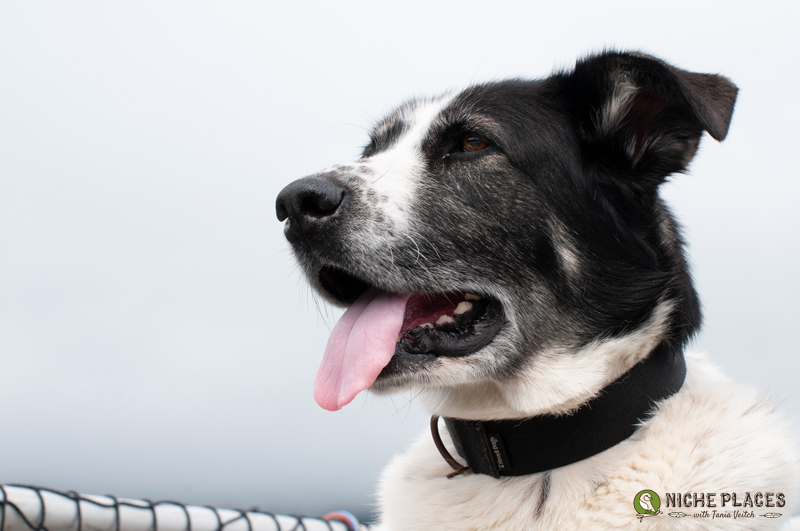 Advantages Of Exploring By Kayak

There are many benefits to exploring Clayoquot Sound’s extraordinary wilderness coastlines by kayak.

Not only can you view bears from a pretty awesome vantage point, but you also get a much better view of other sea creatures than you would from a larger boat.

The kayak below is actually farther away than it appears. It’s an optical illusion from taking the photo close to the water. 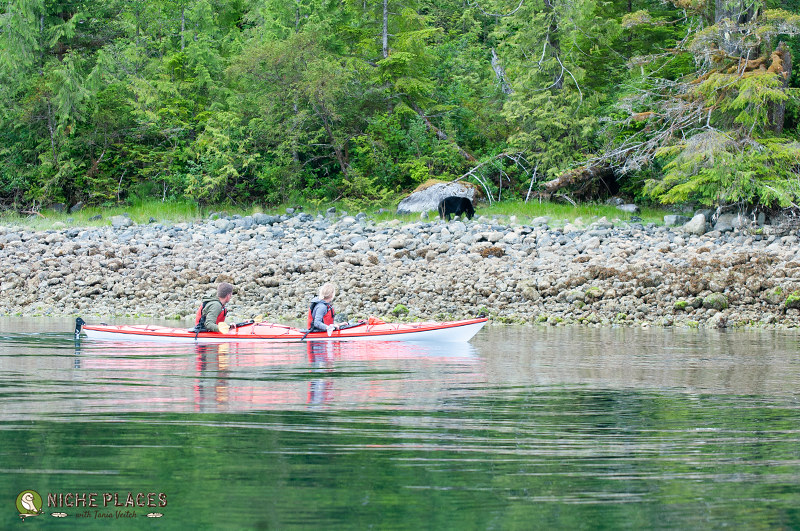 Our guide, Jess, educated us as we drifted close to rock walls about the various life forms sticking to them. She peeled a ‘leather star’ from a rock to show us its underside. She explained how they push their stomach out to catch their prey and then pull it back in to eat it. She also pointed out sea anemones, and purple and orange starfish. 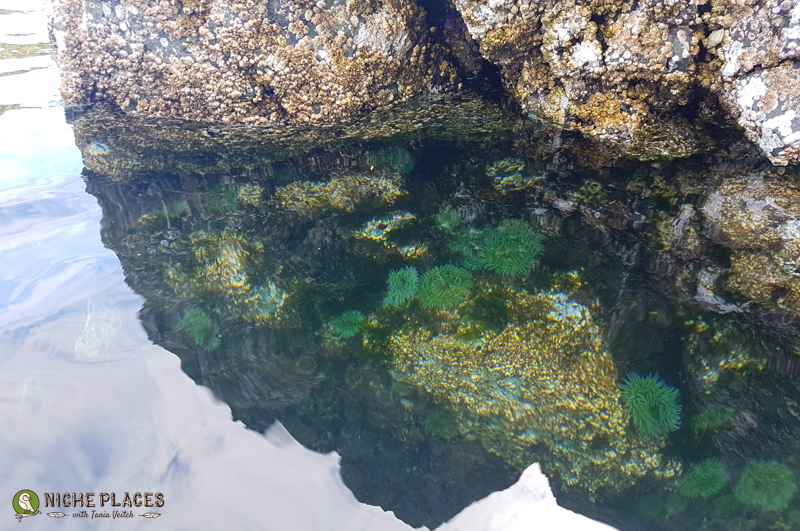 We got a good look at vegetation like bull kelp and other creatures such as the “Fried Egg Jelly Fish”. That’s its real name by the way! We drifted over lots of these amazing creatures. They really do look like something that could accompany some hash browns and toast. 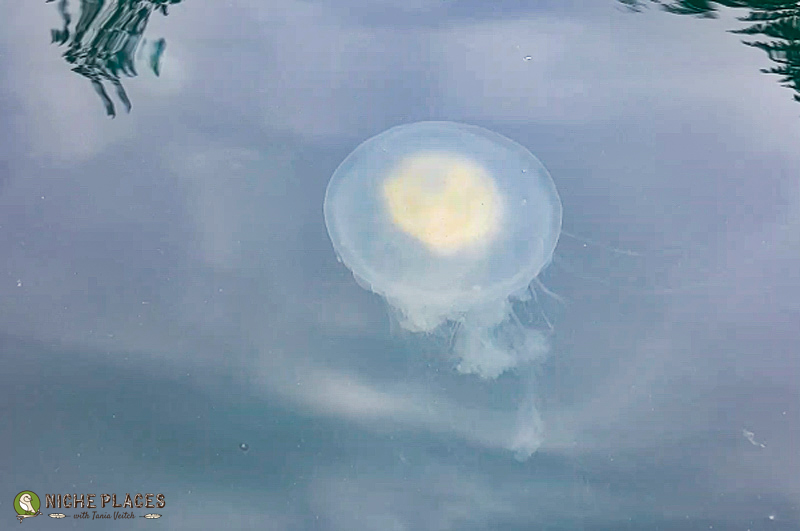 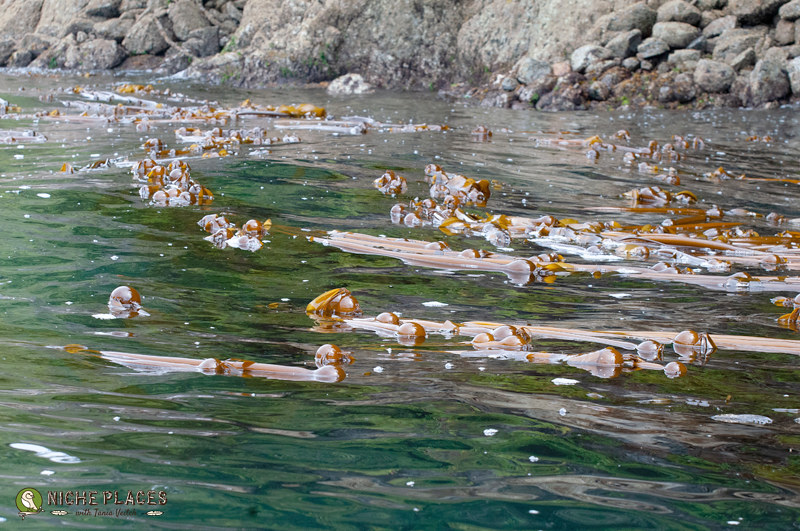 Although I’ve already learned how fast bull kelp grows (up to two feet per day), I didn’t know that one bulb contains enough carbon monoxide gas to kill a chicken! Yikes!

With no engine noise to overpower nature’s symphony of sounds I could fully immerse myself in my kayaking wilderness experience. My ears tuned in to the dipping of my paddle blades; the gentle lapping of the ocean against rugged rock walls; the warbles all around us; and the shrill call of a nearby eagle piercing the ocean’s steady rhythm. Ahhh peace!

It’s nice to get away from crowds and the noisy everyday world. Kayaking is a great way to turn the dial down on noise and stress. It gives me a sense of well-being and tucks any troubles away for a few hours.

Although we were part of a group on a mission, we still had the freedom to explore. If we spotted something interesting, we had the means to paddle to a better vantage point or to stop and have a better look. 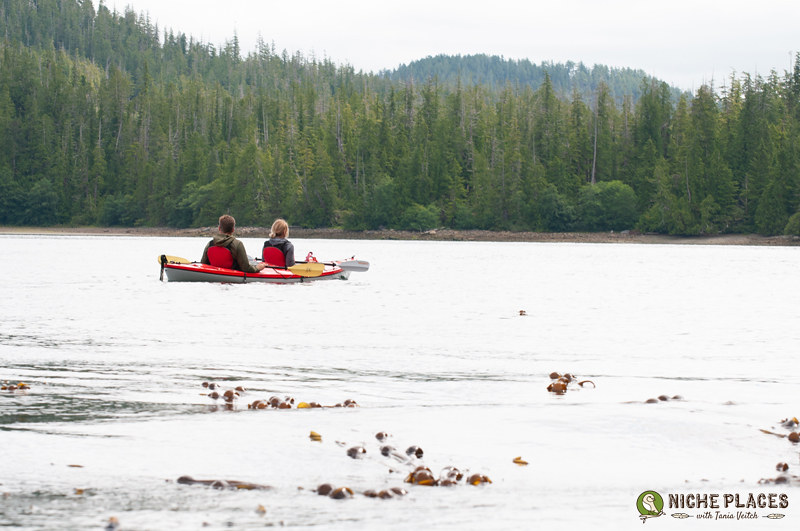 Getting the heart pumping and blood flowing at times felt good. It was exhilarating to paddle hard after receiving report of a bear sighting not too far away. It added a sense of adventure! 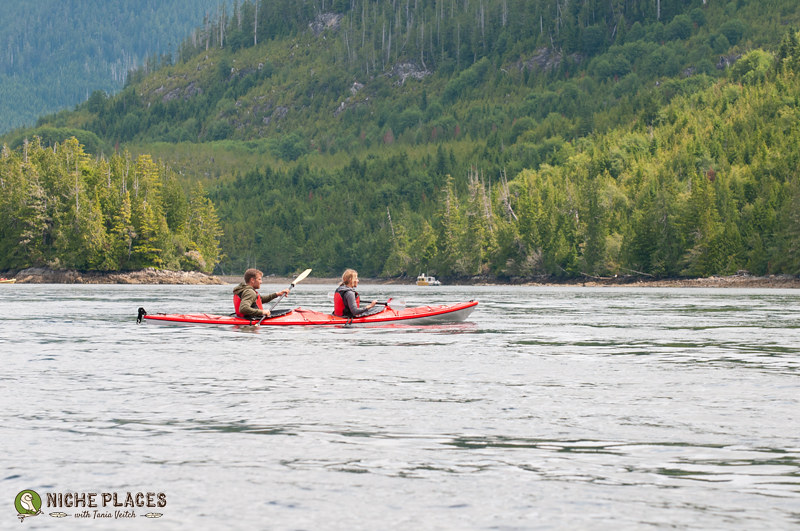 5.  Minimizes the Impact on Wildlife

Kayaking minimizes noise pollution and is less likely to disturb wildlife. The bears just calmly went about their business foraging for crabs while we watched from a safe distance. Plus, because kayaks are self-propelled we weren’t smelling exhaust fumes the entire time. 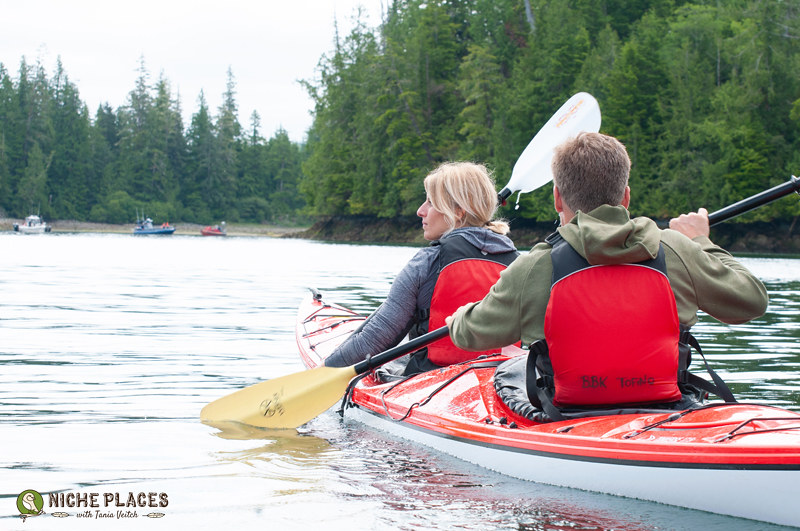 About TJ and Black Bear Kayaking

Since being here in Tofino, I’ve met some inspiring people who have also thrown the puzzle pieces in the air and started over. TJ, the owner of Black Bear Kayak, is one of them.

TJ used to have all the bells and whistles of a very comfy life. He had an Audi and a job which required him to wear a suit and tie until he decided it was time to chase his dream. 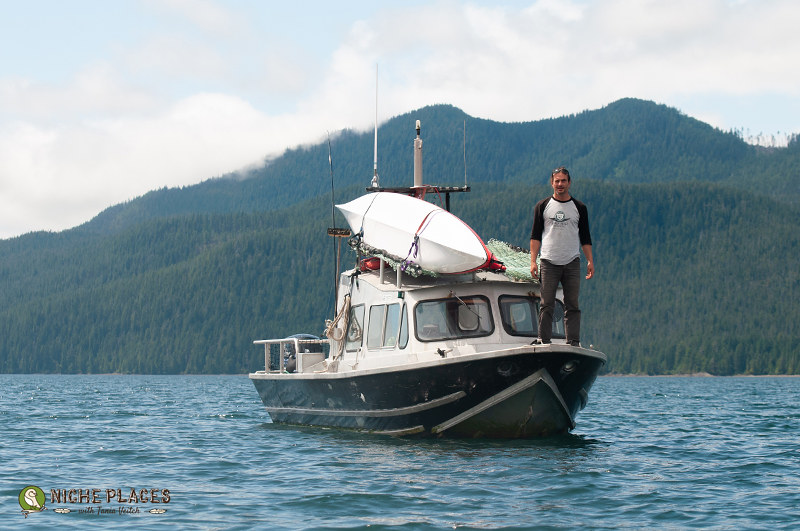 Originally from Germany, TJ moved to Switzerland to work for the biggest Swiss bank headquarters as an Information Architect and Web Consultant. He worked in the field until the 2007 real estate bubble burst and the banks started plummeting. It was a sign to move on and go live his dream.

TJ had grown up infatuated with The Beach Combers TV series and so decided to explore this part of the world. I smiled and understood when he said he wanted to experience the wonder of things in the same way that a young child does for the first time.

Not everyone got why he wanted to make such a major life shift, but sometimes you need to follow your heart and throw fear to the wind.

In 2009, TJ emigrated to Canada and worked as a kayak guide for a company in Tofino. It was based out of Weighwest, currently Tofino Resort and Marina. The kayak company, unfortunately, abandoned their business at the end of the season, sold their kayaks, and issued TJ his final pay cheque which bounced. TJ, who was living in his car at the time, traveled south to Costa Rica for the winter where he became a certified river rafting guide. He returned to Tofino in April 2010 and founded Black Bear Kayak. He currently lives on a sail boat with his dog, Sawyer.

Find Black Bear Kayak at 390 Main Street (down 3rd Street) in Tofino. They are located inside Storm Light Outfitters. Visit their website or call 1-250-725-3342 to reserve your adventure!