This wasn’t the view I planned to have of Ladyslipper today, a sparkling azure mountain lake cradled against the rocky and snow-patched Cathedral Rim, but it’s certainly one of the most majestic backdrops I have seen in a long time. It made my ordeal during the last hour and a half worth it and I’m not referring to the difficulty level of the trail. The reason I am sitting here now with this particular view of it is because I had to detour off the trail.

Early this morning, I set out towards the Cathedral Rim from my camp at Quiniscoe Lake. It’s not the most popular route because it’s a long and gradual ascent that becomes more difficult the closer you get to the top, the last section along a precarious shale slide before reaching a moon-scaped summit.

The view is why I choose this route each time I come here. Hiking towards the jagged and menacing Grimface, Matriarch and Macabre mountains is worth the extra effort as opposed to having them at my back on the descent. 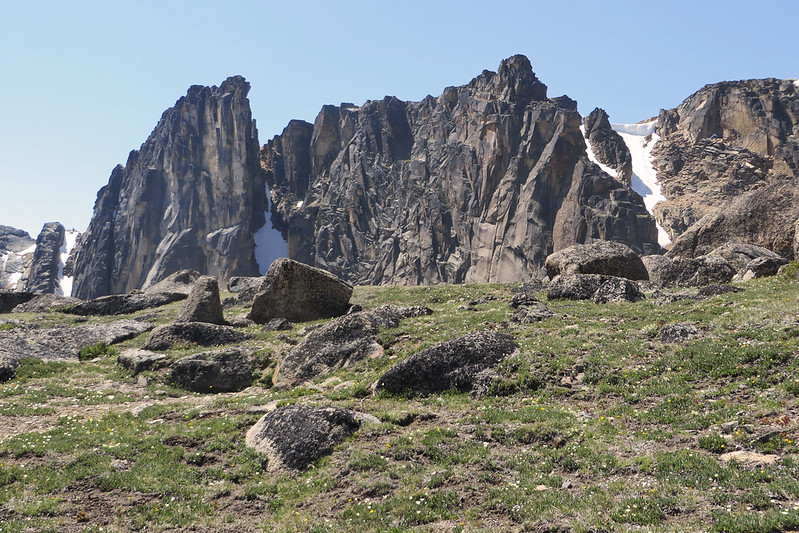 But no, my ordeal wasn’t about the difficulty level of the trail. My ordeal was more of a goatly kind.

Because I chose to hike the less popular way, I have been hiking alone all morning. That’s the way I planned it anyway. This is a solo trip for me partly because I wanted the experience, but partly to see some of my favourite places before I take off on my worldly adventure next month. What a perfect weekend for it. The skies are clear and the temperatures were already warm early this morning.

The walk through the woods was tranquil. The trail edges were sprinkled with purple lupin, yellow daisy-like wildflowers and bits of red Indian paintbrush. Silver deadfall added such a lovely contrast to the colourful display.

Another masterpiece by Mother Nature only her brush tip colours all the senses. A light breeze carried the sweet subtle fragrance of lupin and the melodious warble of alpine birds. Young larch needles, so lush and green right now won’t be come autumn when they turn golden and drop. Ahhh, such peace. It didn’t cross my mind that Mother Nature could possibly add an element of unease to this peaceful picture. 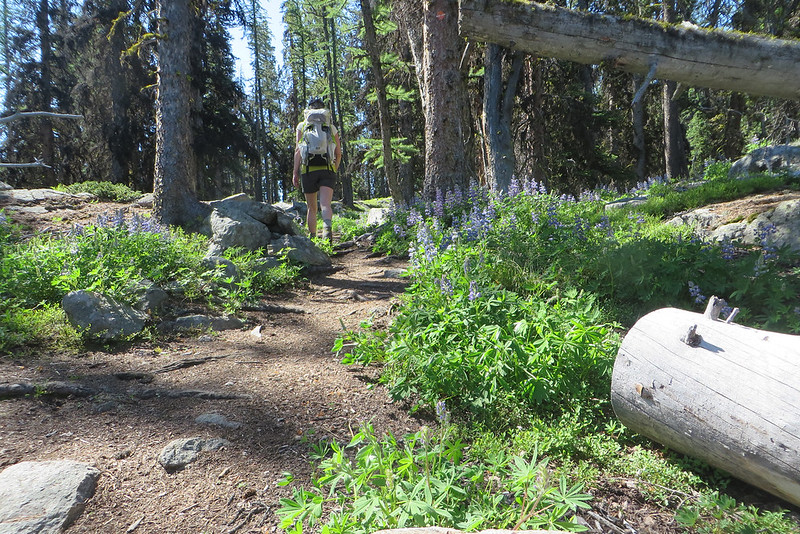 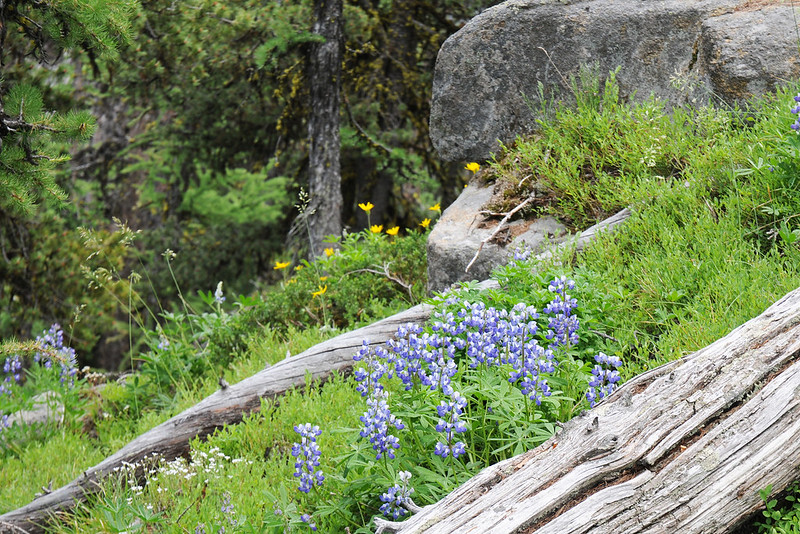 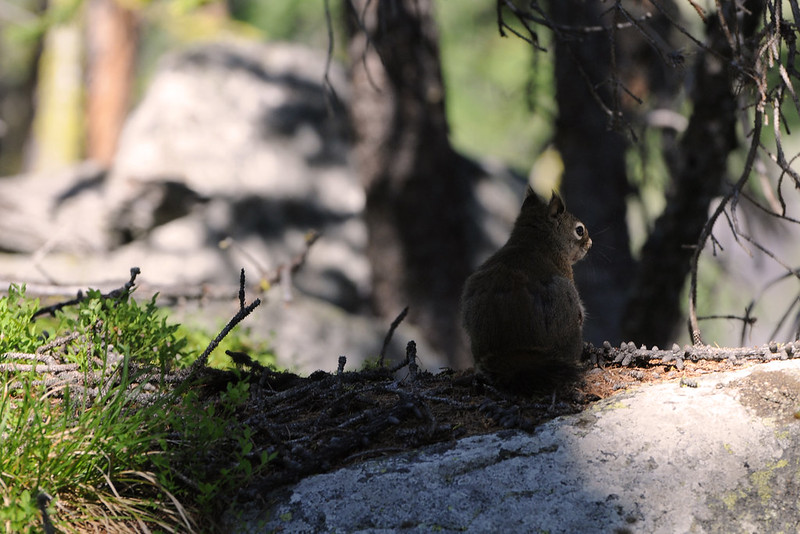 A bright snowfield gleamed through the trees up ahead. As I got closer, I could see a dozen mountain goats lounging on it. It was my lucky day! Or so I thought.

The goats looked shabby. Patches of thick winter fur still clung to their bodies. At this time of the year you often see white tufts stuck to branches as goats shed their winter layer.

A small clearing below the snowfield seemed like a perfect place to drop my pack and lay out a picnic snack consisting of a baguette with pepper salami and smoked Gouda cheese. The only thing missing was a crisp glass of pinot gris, but that would come later back at camp with my jalapeno stuffed olives. The wine bottle is chilling in the lake right now actually!

As I relaxed and savoured the pepper salami and smoked Gouda combination, I felt as content as the goats looked dozing in the snow with their eyes half-closed. 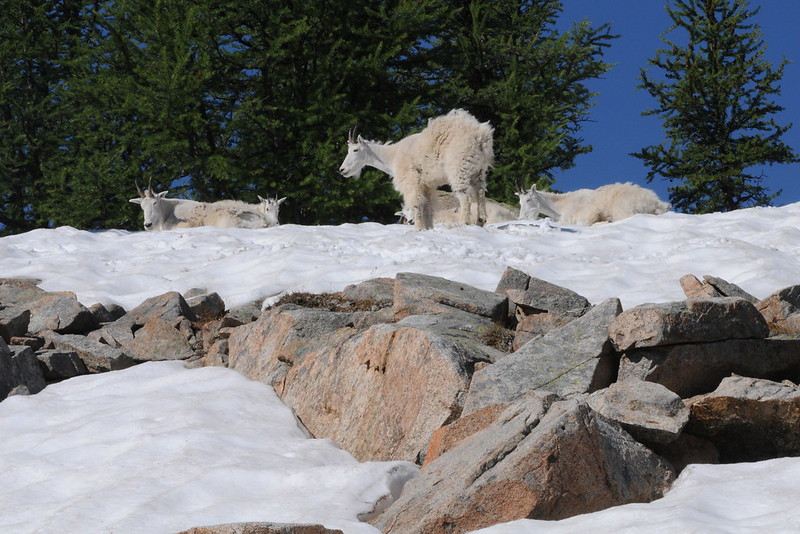 So engrossed in my experience, I didn’t notice a young goat sneak up behind me until I heard him grunt. He startled me and, in my surprise, I startled him.

“Oh, hello!”, I exclaimed. For a couple of minutes our eyes locked. Then he took a step forward – a little too curious for my liking. 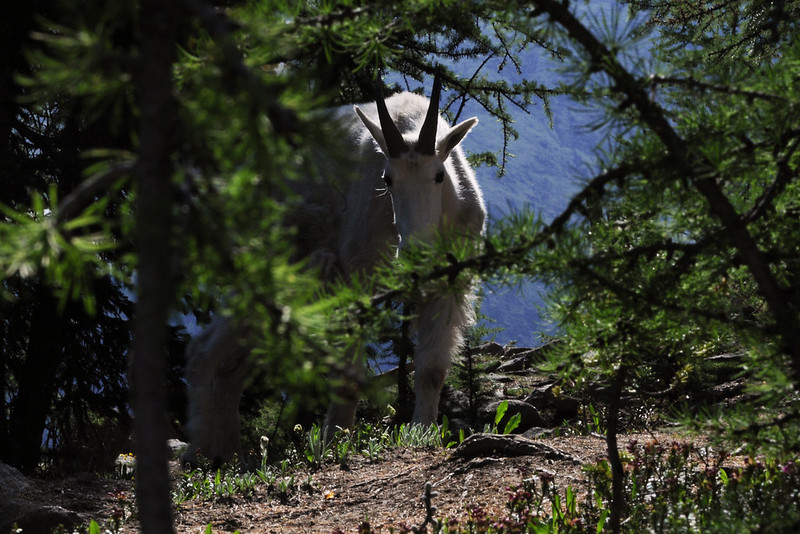 They say mountain goats are harmless, but I know better after hearing a story about a territorial goat a couple of summers ago. A man was impaled by those pointy black horns while passing on a trail. The goat took the man’s approach as a challenge and charged him. Unfortunately, the man didn’t survive.

So, as I sat there in a staring match with the young, gleamy-eyed, pointy-horned goat, I decided to move away from my things. 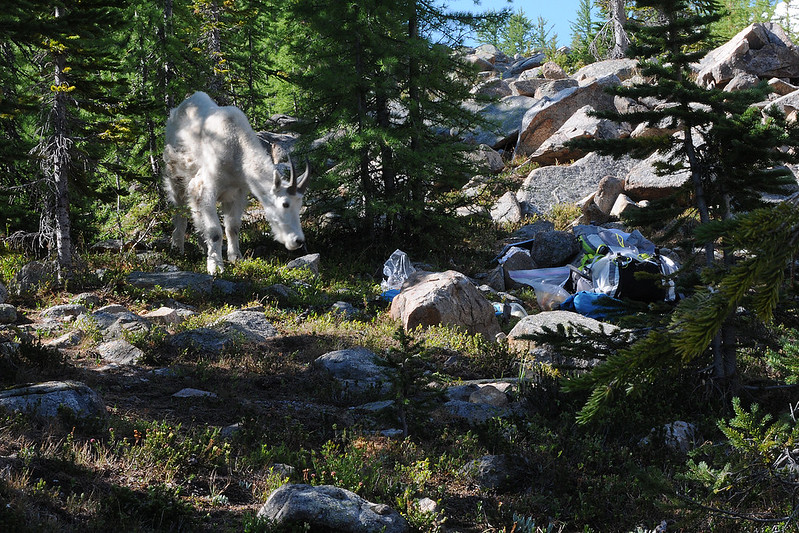 Our stand-off must have alerted the others because their half-closed eyes were big and round now. Three more goats stood up and ventured down the snowfield. One of them was large, probably the leader of the pack. Yikes! 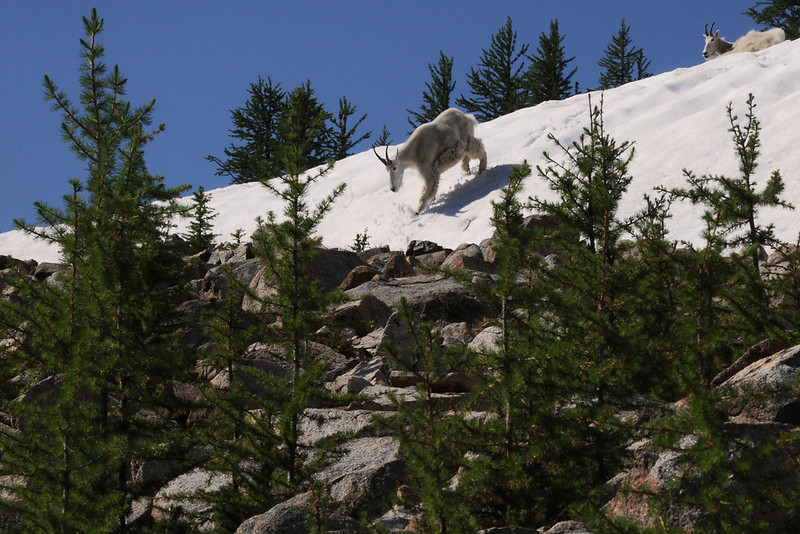 I retreated toward a pile of boulders while the four goats craned their necks and sniffed my things. I turned and realized that I was also backing towards the rest of the herd. “Probably not a good idea,” I thought as the goats looked on. This is surely how a bear must feel after being spotted by a bunch of overly curious tourists. It’s not comforting when you don’t understand the thought process going on behind those black, gleamy eyes. 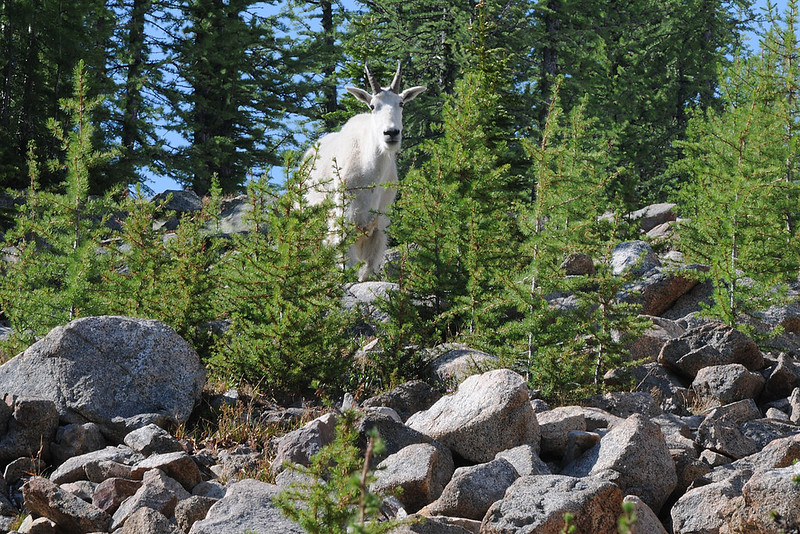 The large billy goat (I’ll call him “Alpha”) stepped in my direction and intently eyeballed me. Did he view me as a threat? Maybe to him, I was equivalent to a predator like a cougar – and no, not because I’m a single 45-year-old woman. Or, was he just curious? Maybe because I was just one small human the goats felt brave around me and just wanted to check me out? Whatever the reason I did not like the attention.

I made a dash for the trail through the trees, but Alpha continued to pursue me. With no other choice, I booked it down the trail and left my things behind.

After five minutes of running, I stopped and stood silently on the trail scanning the forest for any sign of Alpha. The forest was still. I was alone again.

“Now what?” I thought as I brainstormed my next plan of action. Do I walk the hour or so back to camp and convince some strapping man to accompany me here and scare the goats away? Or, do I figure this out on my own? After all, this is good practice for a woman ready to brave the world on her own, right? Things may go sideways at some point on my journey. The decision was made. I would put my brave face on and get myself out of this predicament myself.

Carefully and slowly I stepped back up the trail. My boots creaked with each step. I peered as far as I could for any sign of those shabby-coated goats. The snowfield gleamed through the trees again. Argh! The goats were still there, but luckily my pack was closer to me than it was to them. I crept over and began stuffing things back in. The goats took notice.

Being quiet wasn’t going to do me any good now, so I called out to them, “Hey goats! Just packing up my stuff. Putting things away! Don’t worry about me. I’ll just take all this and move along. I’ll be out’a here in just a minute.” I even spoke with a deep tone to give the illusion that there were other hikers around. To top off my act I began singing Somewhere Over the Rainbow. Silly maybe? It’s amazing the ridiculous things you’ll do to get out of a predicament unscathed.

Finally, with my pack secured to my back again, I was ready to continue. The goats had convened on the trail though. Great! It was beginning to look like I wouldn’t get to the Cathedral Rim today unless someone saved the day. I could be waiting a while for that to happen and I didn’t come here, to one of my favourite places, to be hung up by a bunch of mountain goats.

It was time to make my own trail so I navigated down across some gigantic boulders and then across an avalanche chute. Grimface, Matriarch, and Macabre beckoned in the distance. 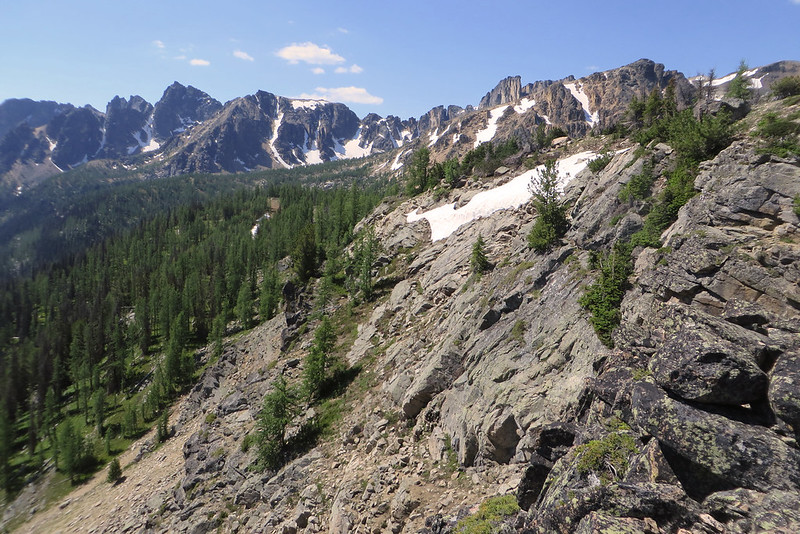 Part of me was expecting Alpha to bound down onto the boulders for another stand-off. He was out to get me I was sure and as I crossed the chute, I kept repeating the mantra, “God, just get me out of this safely” and I added, “God, I would really be okay with not seeing another goat today.” 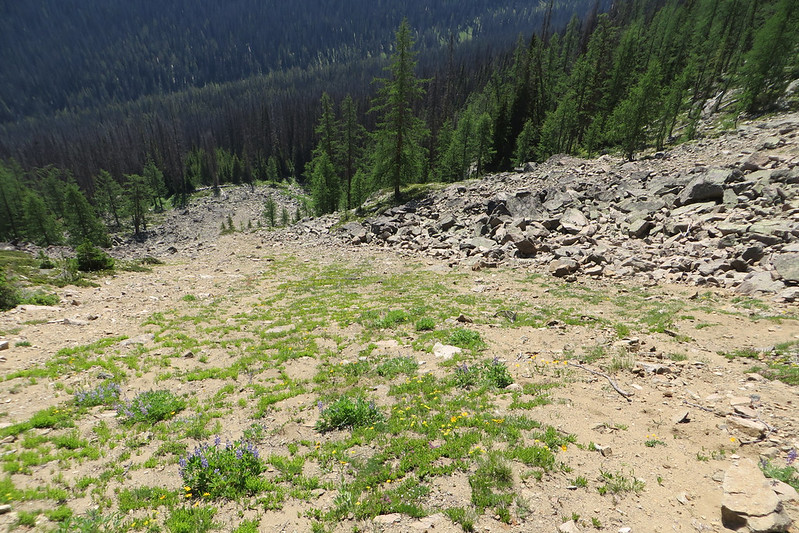 Once across I collapsed among some larches. What a relief! I unbuckled my pack and let it slide off my shoulders onto the bank. It was time for a chocolate hazelnut bar. Those ones are the best – dark chocolate with the perfectly light crunchy texture of hazelnuts. There’s nothing like chocolate to combat a little anxiety!

Re-energized after my chocolate fix, I continued up the hill hoping to reconnect with the trail. I didn’t know where I was until I came out at this spot, but as I sit here on the grassy hill above Ladyslipper Lake writing in my notebook, I have spotted yet another young goat 50 yards from me. He has stopped and noticed me – his tail flipped up in alert. Great…and as I scan the meadow to my right I wonder to myself, ‘Where are the others?’ 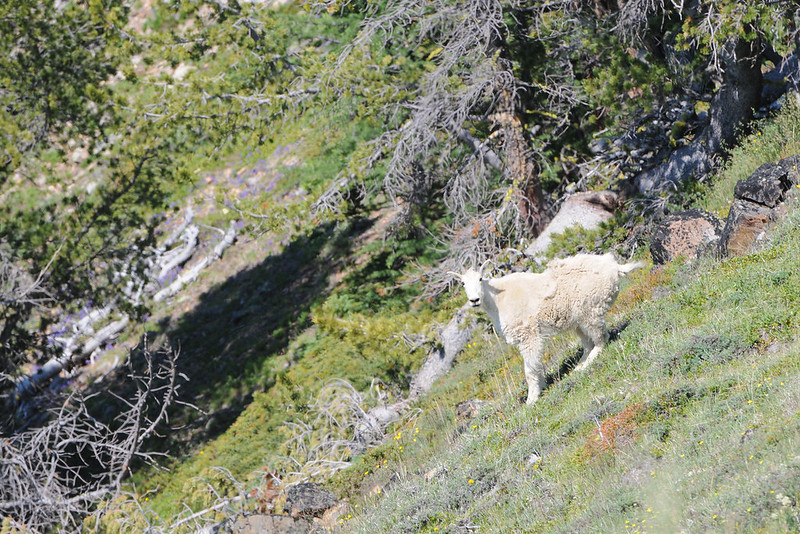 Cathedral Lakes Provincial Park is located outside of Keremeos, British Columbia at an elevation of 6,000 – 7,000 feet. It is a protected area comprised of jagged peaks, challenging hiking trails, wildflower meadows, azure mountain lakes and abundant wildlife…a true mountain experience for the adventurous. 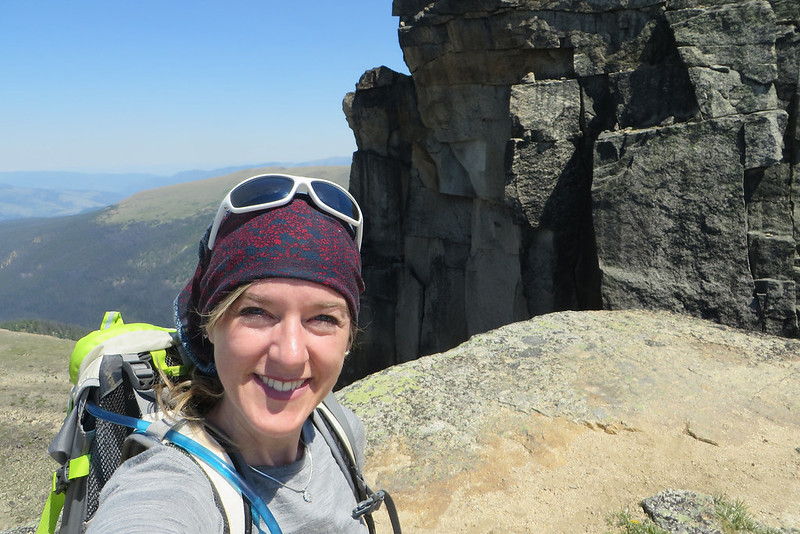 Explore Niche Places Is Off On A New Adventure!