What a great evening in Rabanal del Camino with seven countries: Lithuania, Ireland, Australia, Germany, America, Spain and Canada – one of each of us, plus two bottles of vino tinto, the dry heat of a wood burning stove, a burning candle in a wine bottle and a selection of 1970’s music from Lithuania’s laptop. 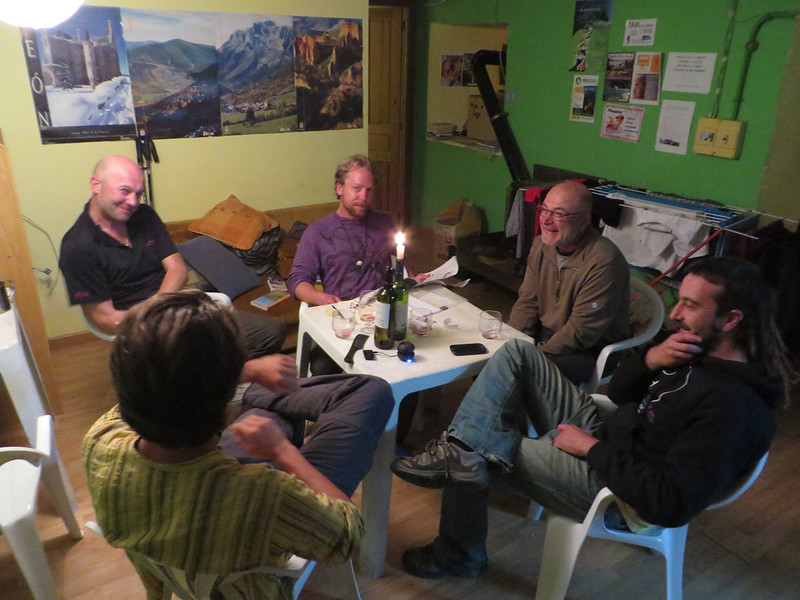 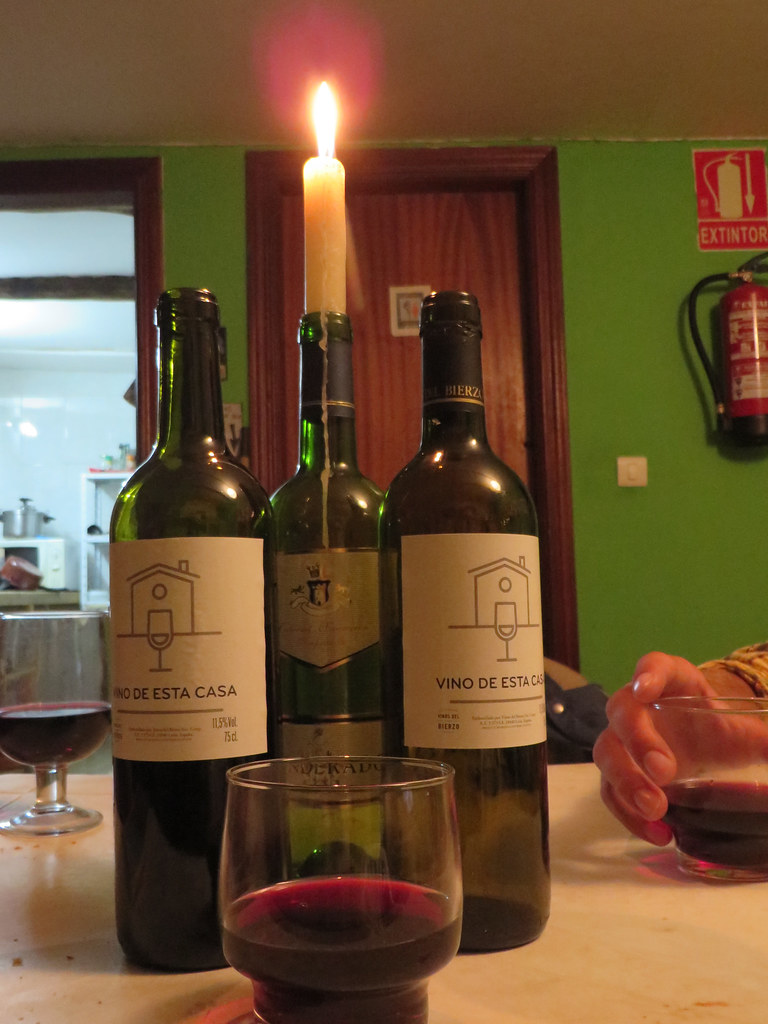 This is a rather unstylishly rustic albergue. We are all sitting around a small white resin table on white resin chairs in a small room with bright green walls. Clothes are hanging on a drying rack in front of the wood burning stove and the only comfy seating is the small disheveled sofa pushed up against the wall.

Joey is scrap-booking in his journal and Alex is playing DJ on his laptop. We are all plain and simply enjoying the moment. My experience at this albergue is shaping up to be one of my most enjoyable. 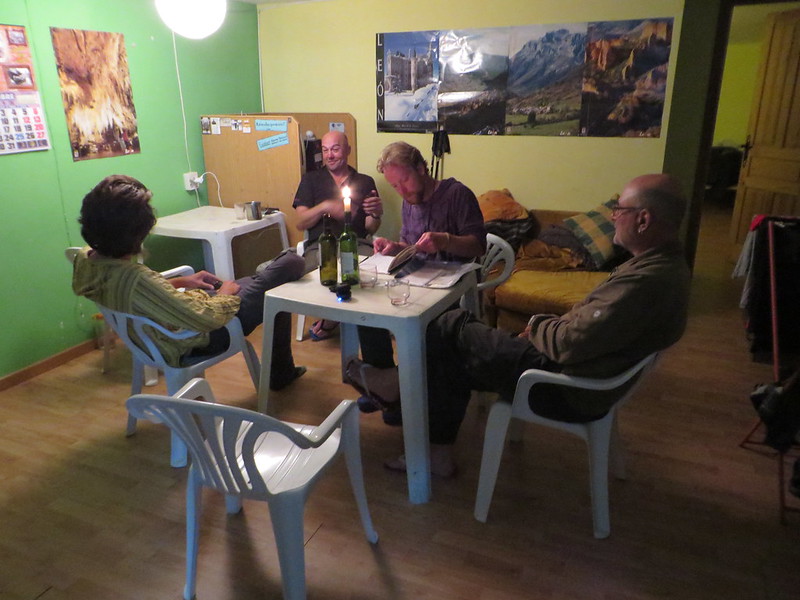 A couple of the guys, Jan from Ireland and Alex from Lithuania, picked up some food from the supermarket and crafted a pasta stir fry. Joey and I provided the vino tinto – two bottles for only four euro. 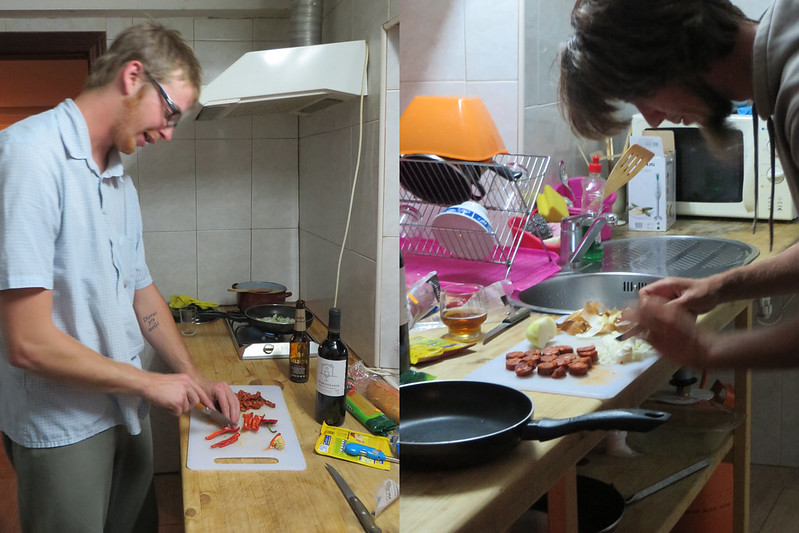 Four of us dined by candlelight and afterwards three others joined us. 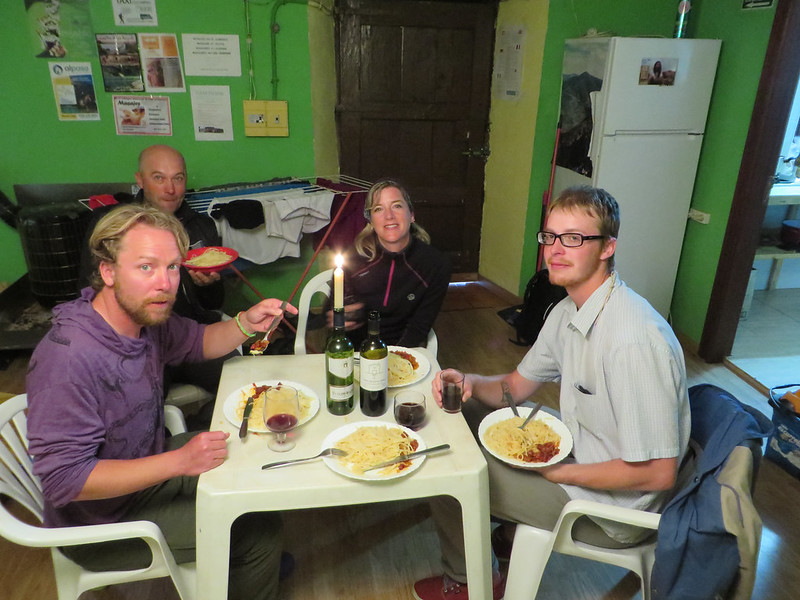 We told stories and listened to some funky German music by Paul Kalkbrenner – Sand and Sky, as well as more familiar musicians such as Jimi Hendrix, Eric Clapton, Janice Joplin, The Bee Gees and ABBA to name a few.

Before I walked this morning, I had an enjoyable conversation with the translator, the peace keeper between me and the hospitalero yesterday during the laundry ordeal. 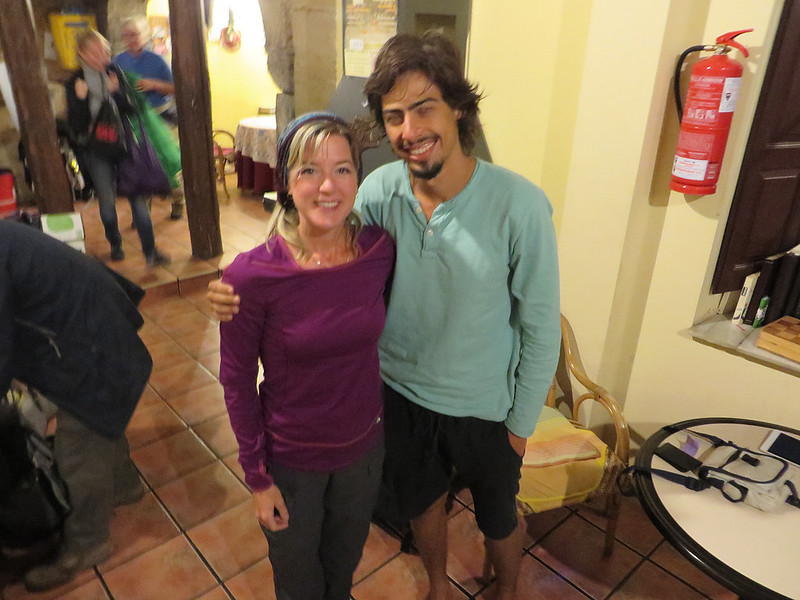 Then I killed some time in Astorga waiting for stores to open, so I could pick up a warm fleece. 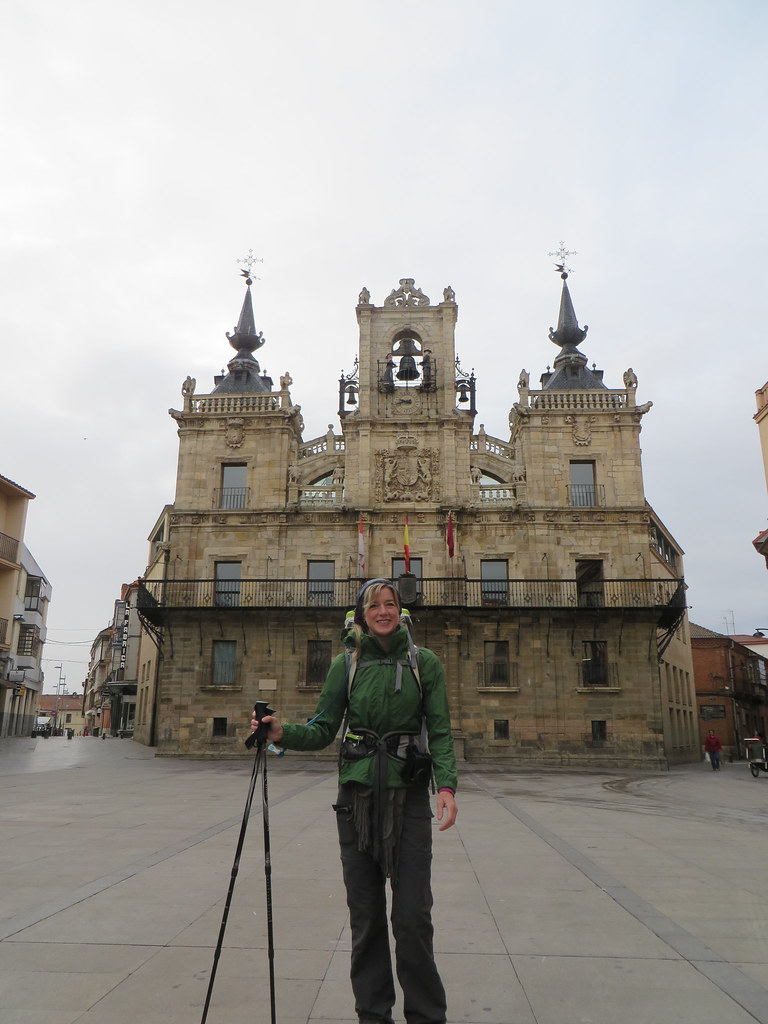 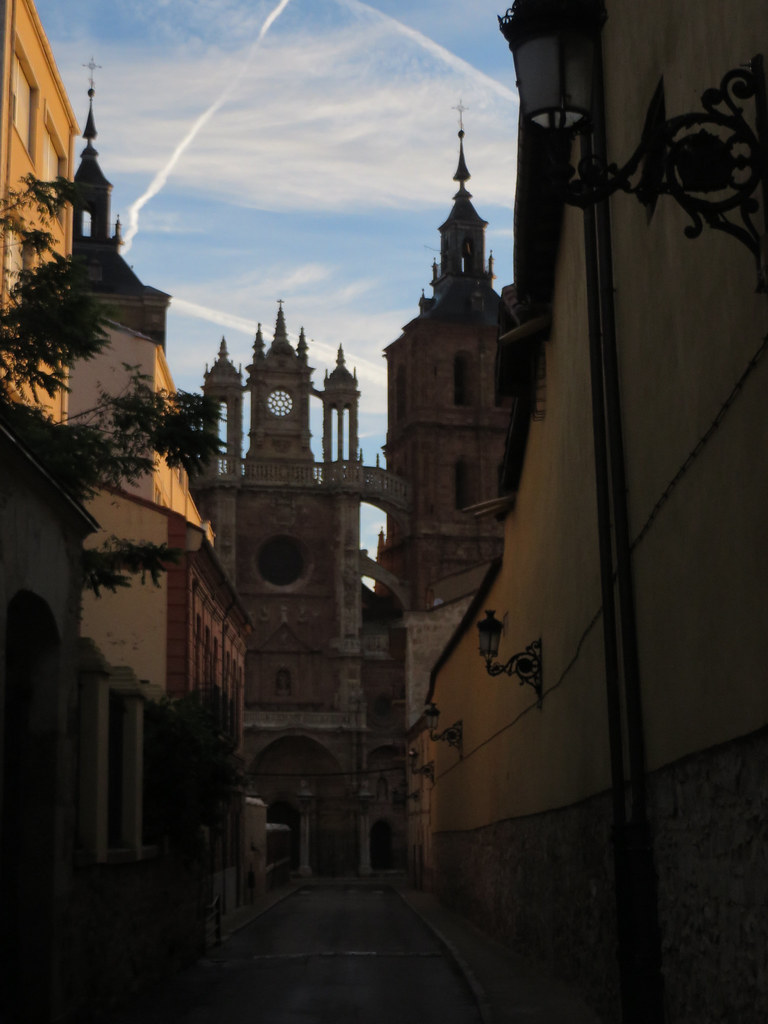 I hung out with Joey for a little while while he took photos of the architecture, including the Santa Maria Cathedral and Gaudi’s Episcopal Palace. 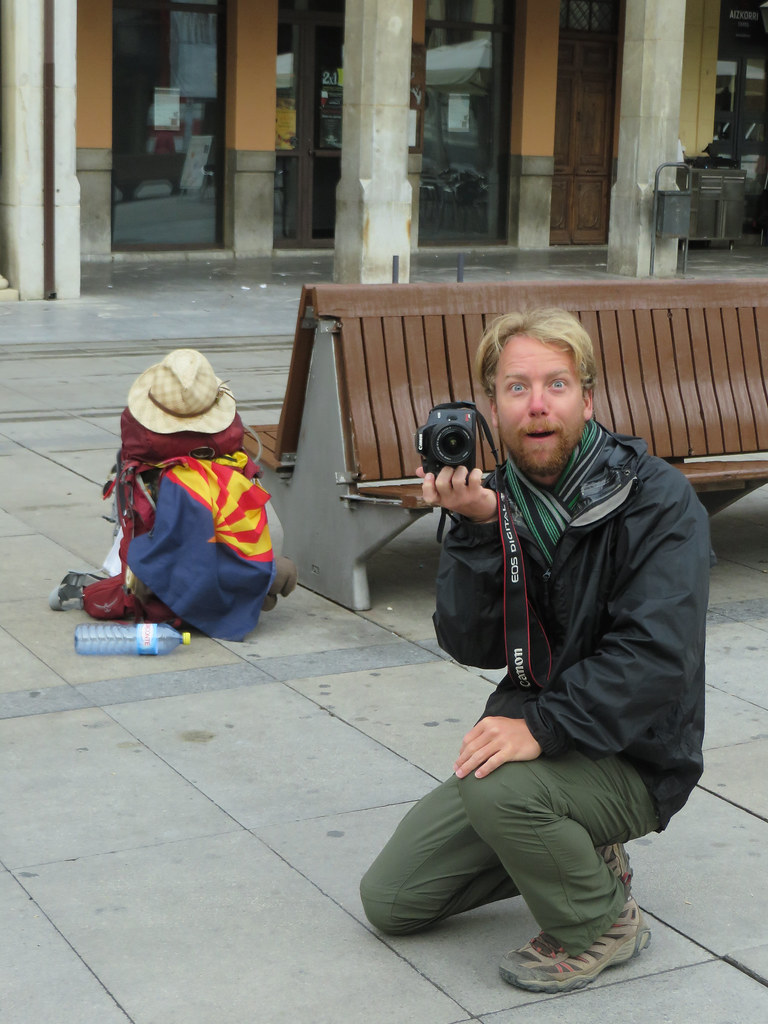 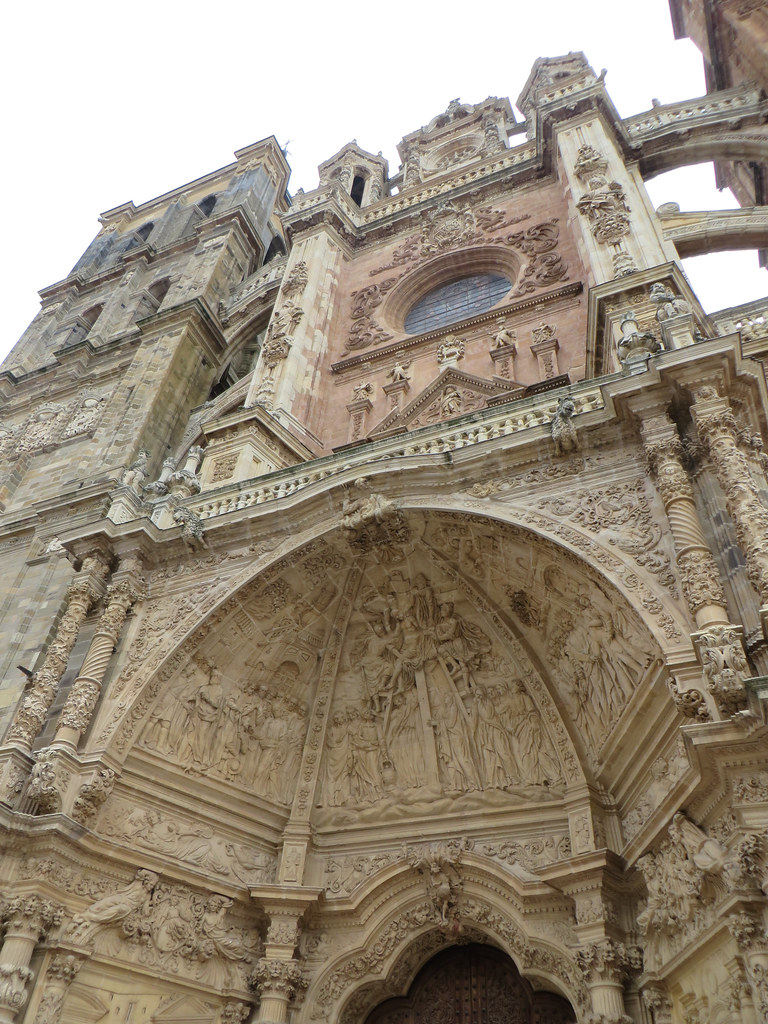 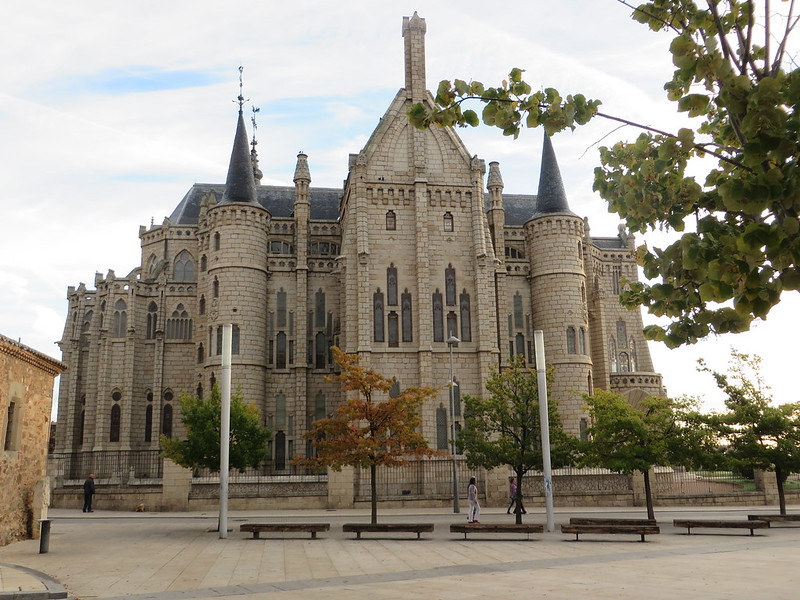 After I bought my new fleece, I headed out on the road. I walked slowly in contemplation and enjoyed the lovely Spanish landscape. 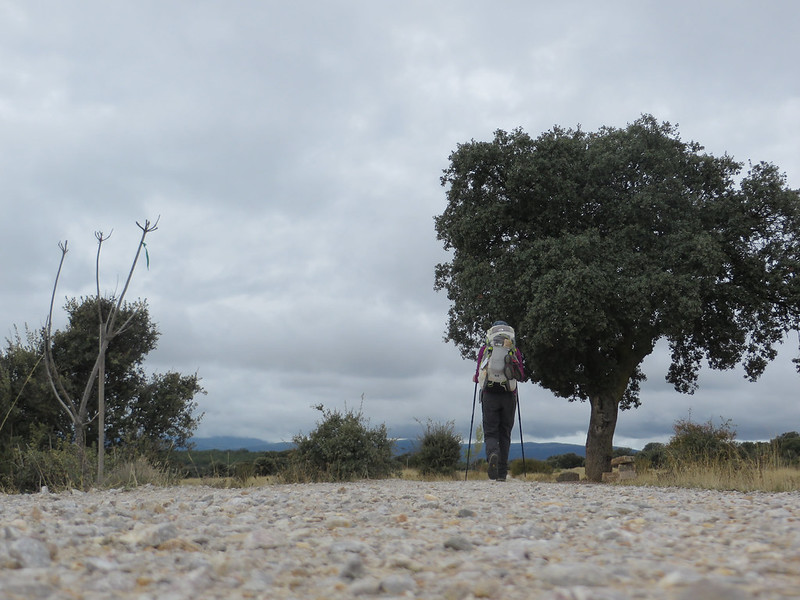 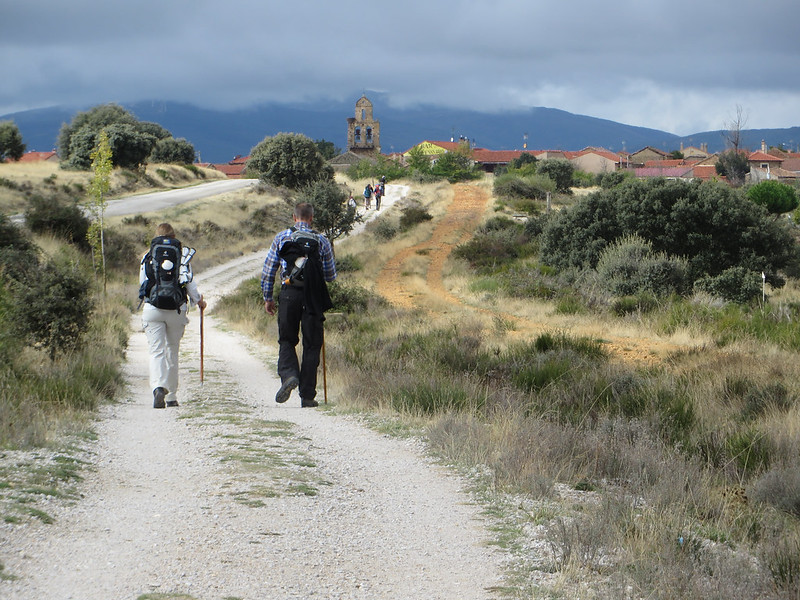 Some even have foliage growing out of grey weathered windows from what used to be indoors. 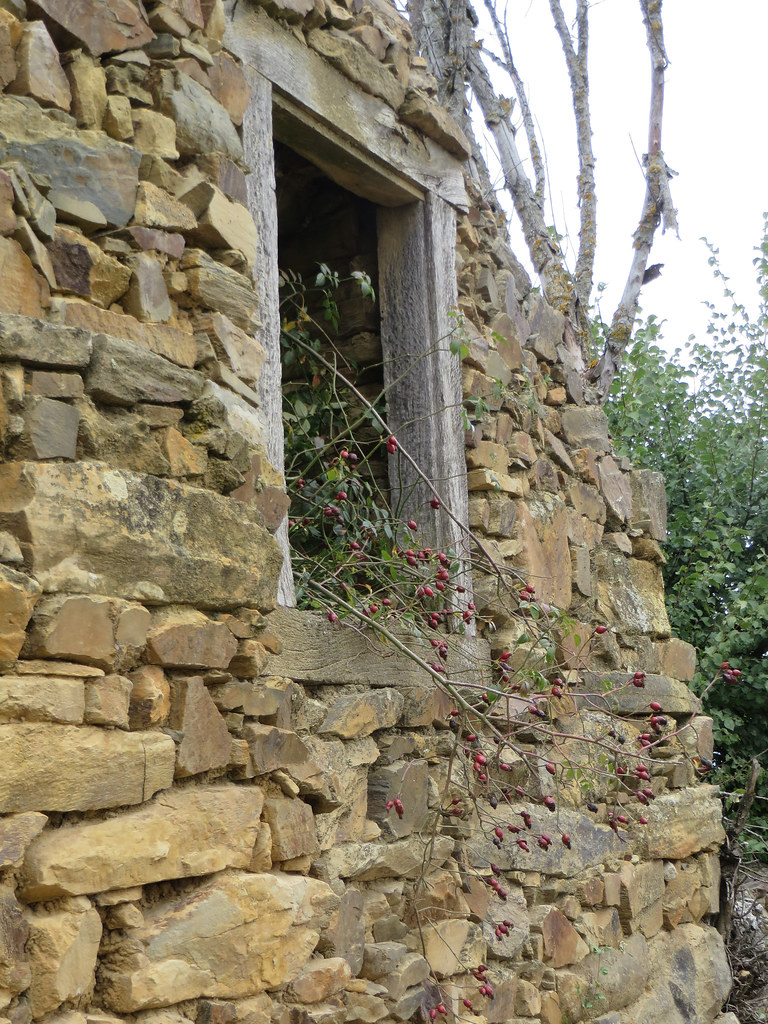 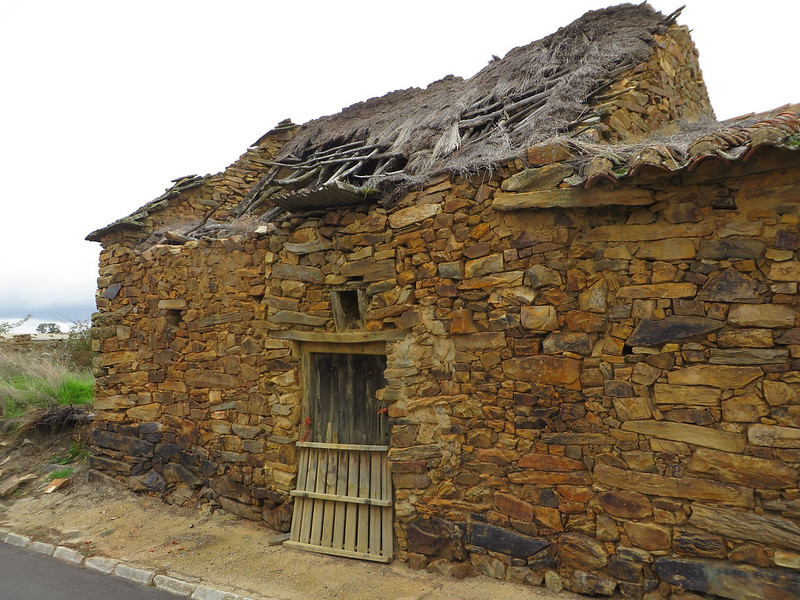 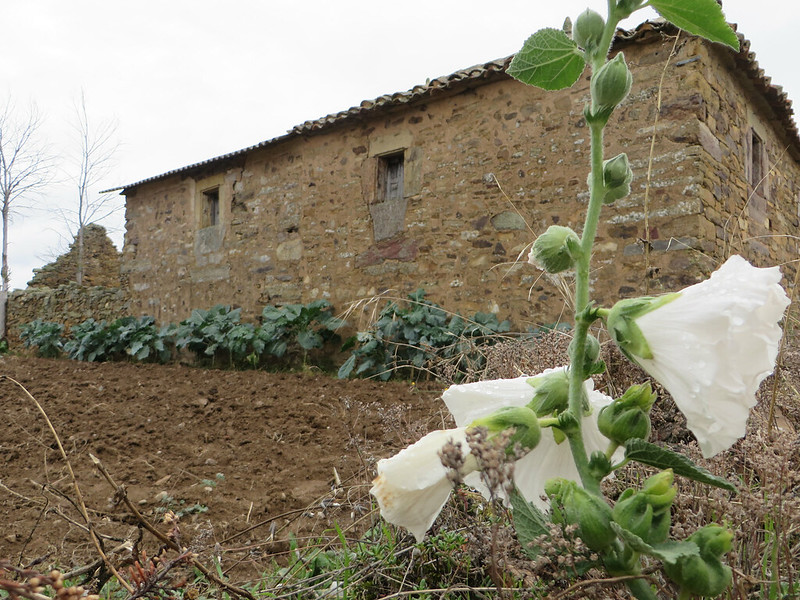 Through a weather beaten fence I was lucky to spot three tiny kittens cuddled together for warmth. 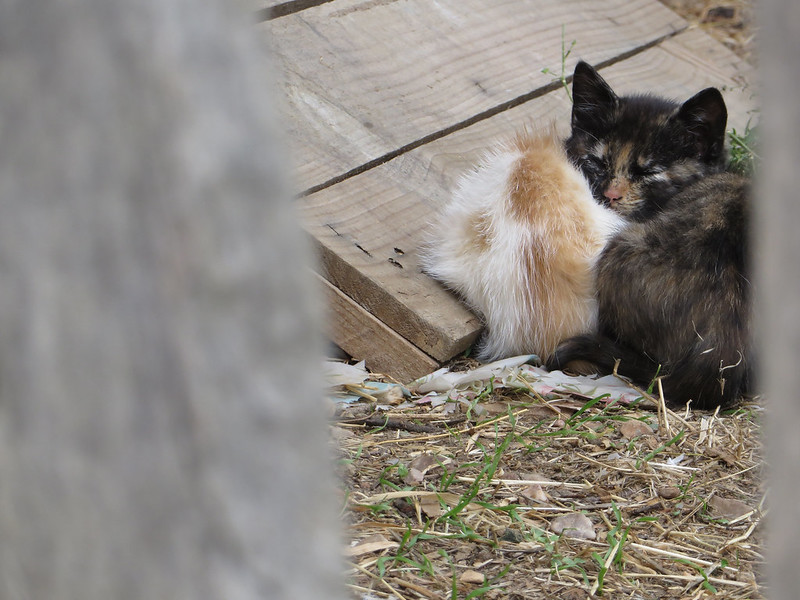 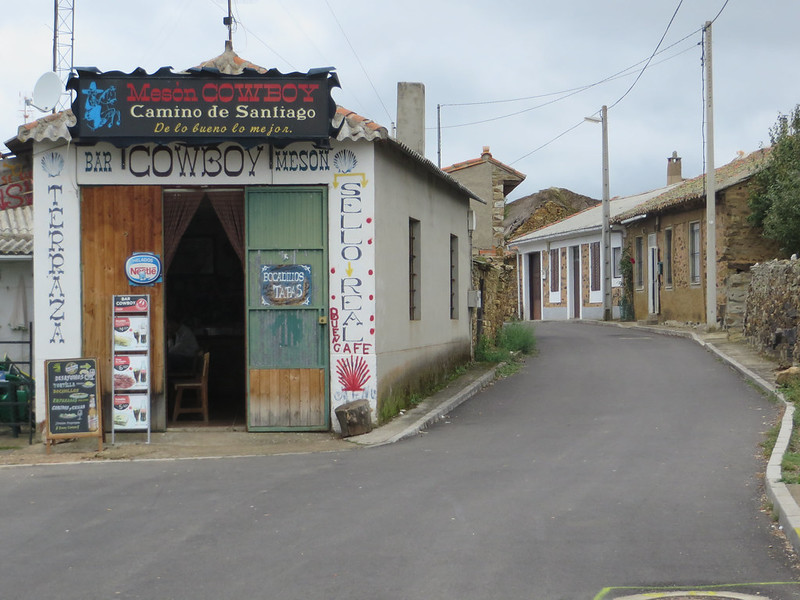 I put on my raingear and continued slowly. 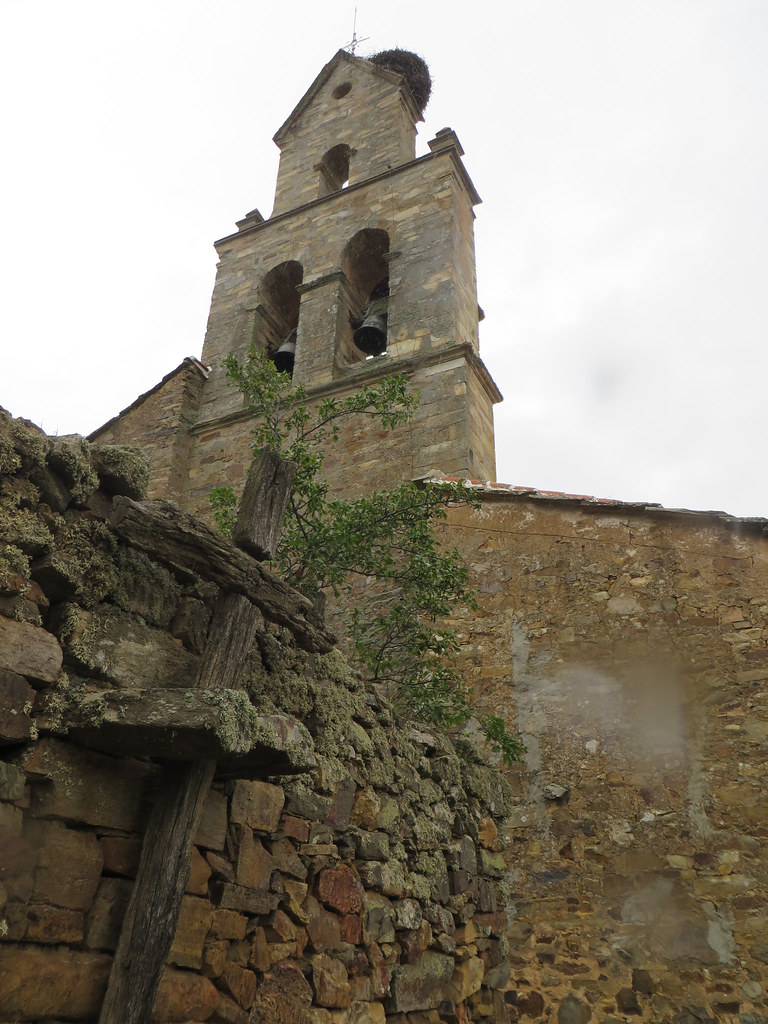 On my right I observed a very uniquely, but fittingly, decorated wire fence. I had observed this before, but paid closer attention to it today, maybe because I’ve slowed down a great deal due to my shin splint. 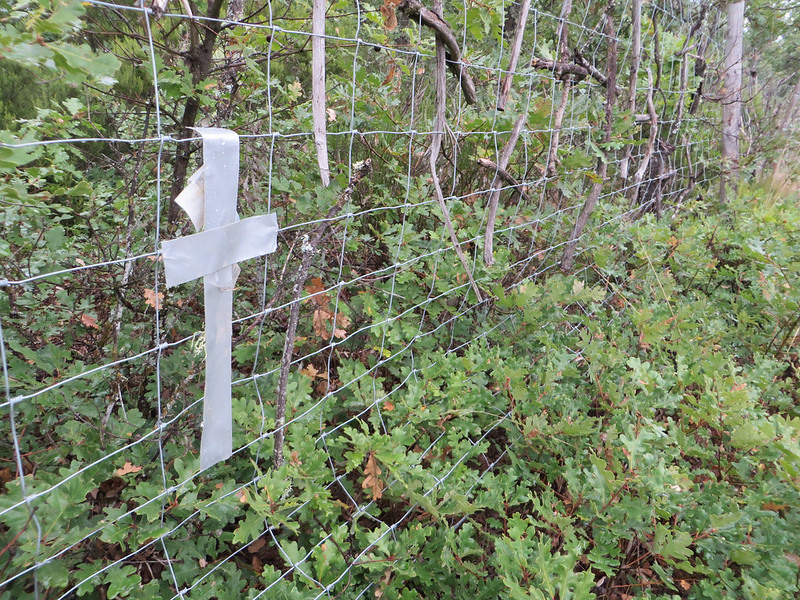 The fence had crosses woven into it. Some were made out of sticks, some out of vegetation, tape, plastic bags, string and rope – whatever was available to the walking pilgrim. There were other symbols of love woven into it as well, including a peace sign, Tibetan prayer flags and a heart. 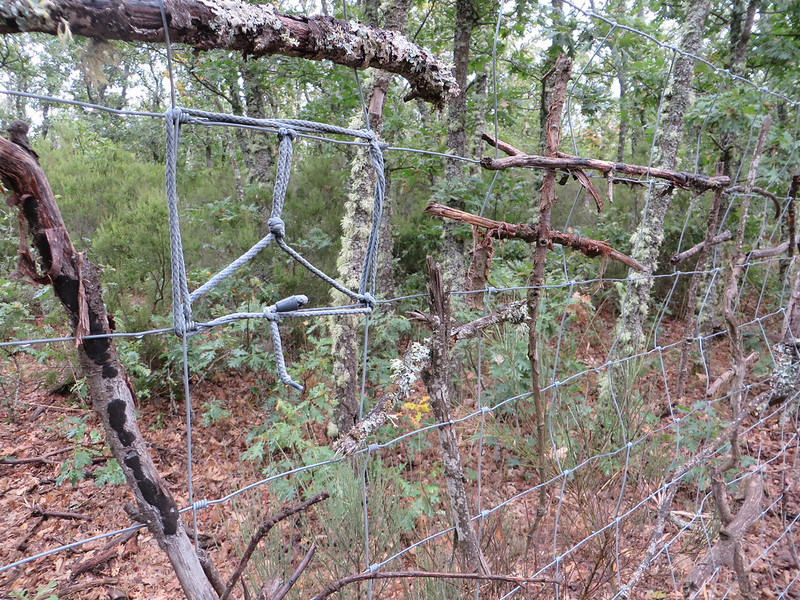 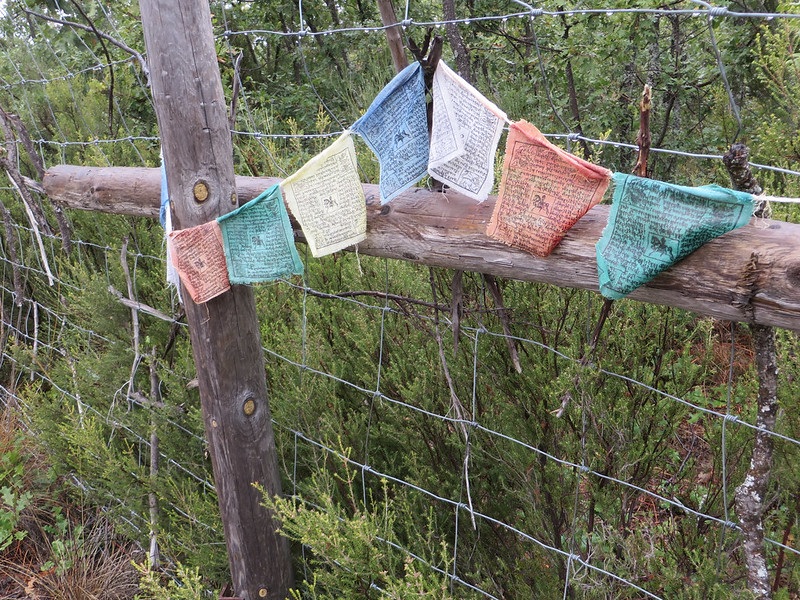 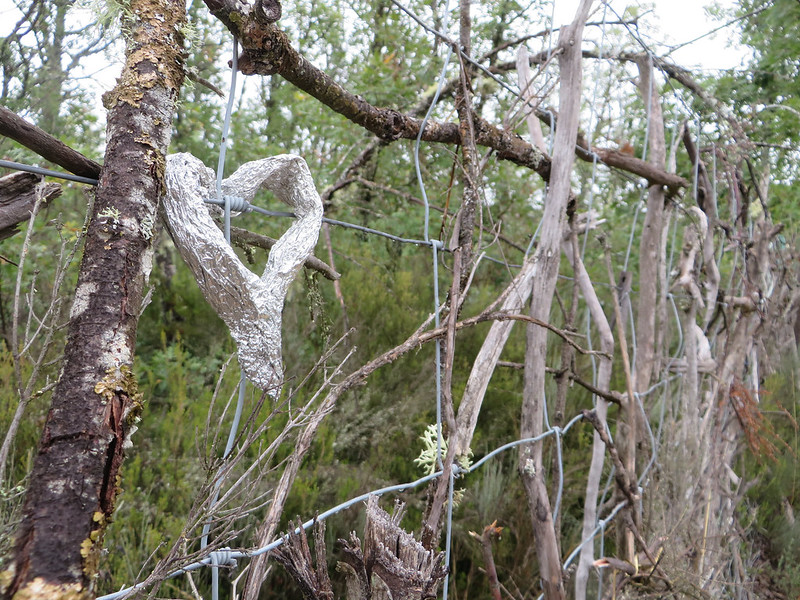 As I walked and observed the crosses, I felt a strong urge to stop and add my own. I pulled some dry grass, sticks and berries from the surrounding foliage and wove it into the fence, however the more I fiddled with it the more it began to fall apart. I tried to fix it, but got pricked and decided to leave it before I wrecked it any further. It was the thought and effort that counted in my mind. 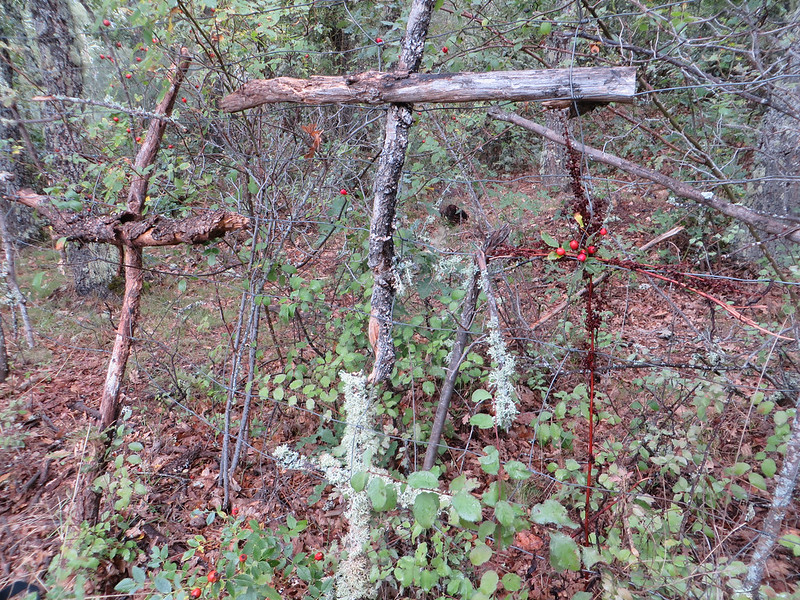 My original intention today was to make it another five kilometres further than the 21.5 kilometres noted in the guide, but I had a late start and walked slowly. That’s ok though. I’m still on track to be in Santiago on October 24th and it has been a wonderful evening.

I received a message from Andrew tonight. He is in Sarria, only 115 kilometres from Santiago. A few days ago he had walked 43 kilometres and mentioned his feet were still hurting. He is so determined. I know he will make it to his goal – Finisterre, “The End of the Earth”. He says he will be back in Santiago on the 24th. I really hope to see him before he fly’s home to Germany, so I wrote back that I hope to get a goodbye hug from him. He said he would give me a big one!

Day 14 AM: The Children From Madrid